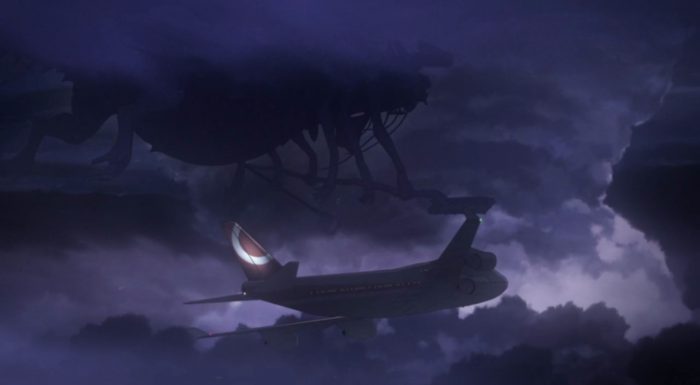 The second special episode of Ryuu no Haisha (or Dragon Dentist) turned out to be … unexpectedly thought provoking, and even one of those series that sticks in your mind, keeps you thinking about it and about which you realize some things later on after you have watched it. If others (like myself) found themselves “full” after episode two, and perhaps even a little “overwhelmed” by so much happening on the screen, then I would urge you to go back to episode two and watch it again after a period of time when you have been able to get some perspective on it and can somehow “see” a little clearer some of the ideas and themes underneath it’s magnificent exterior. 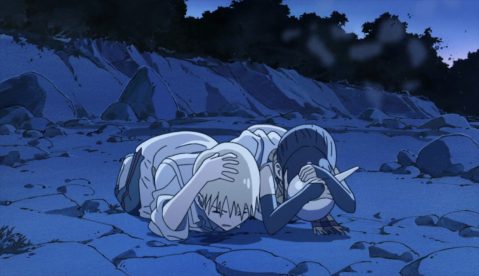 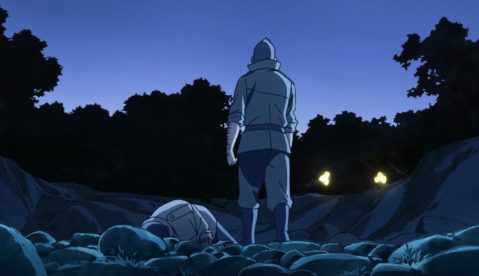 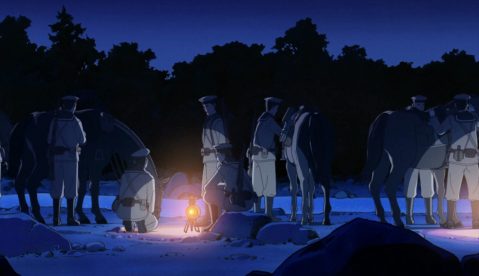 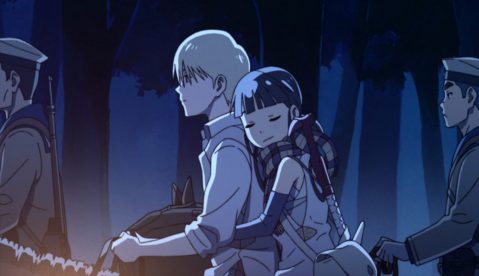 This, ultimately, is to me a story about … it is hard to say precisely here … one’s … destiny? Fate? Kismet? Perhaps even one’s “lot” in life or one’s “doom” (depending on how one might perceive the content of it). To that extent it is … quite a heavy subject. The dragons in these OVAs in many ways represent, or even outright embody “the will of the Other”, or “the gods”, or what have you. And the story focuses around how human beings … interact with, “use”, respond to, etc., etc. these … realities, or existences. The dragons are a known factor and have always been around in history, being rare, yes, but also being well documented, even up to what appears to be “modern” times – a young woman in an airplane sees one literally EAT a typhoon at the beginning of the episode. 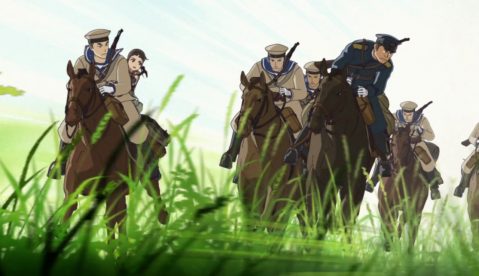 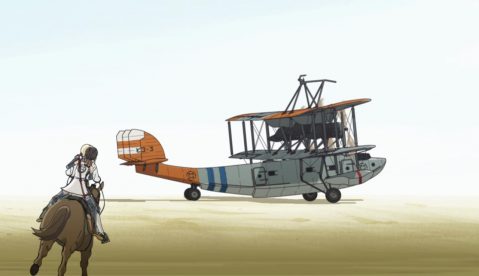 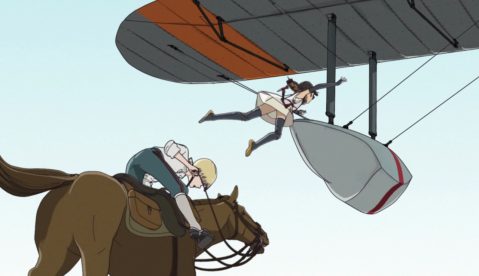 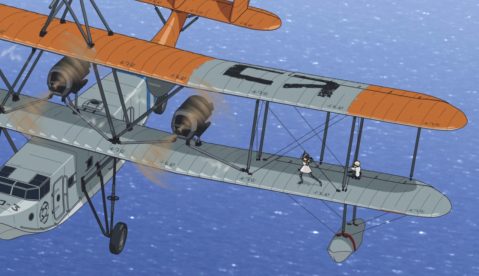 I guess one of the things that is most interesting to me is the fact that there is no question whether or no such things exist (simply because people can see that colossal thing), but it is also true that almost no one (including the priests and the dentists who live on the dragons) know the full ramifications of the dragons themselves. The most they seem to know is in relation with their teeth … or more specifically, a part of the beasts associated with the path humans take after they die. Be this as it may the humans in the OVAs DO definitely know something about the dragons, and there are many, interestingly even among those in the dragon’s service (in this case of the dentists the dragon has chosen) who do not like, agree with or any other similar wide array of negative reactions what the dragons are … about, somehow. And so they … “fight back”. 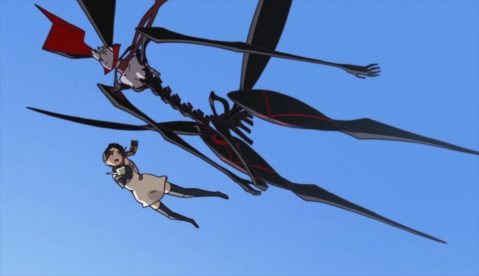 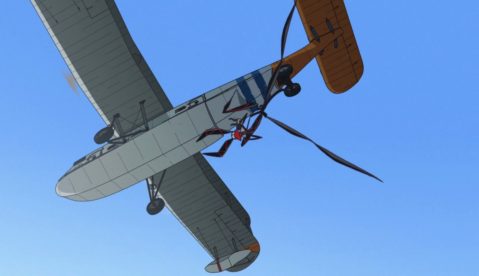 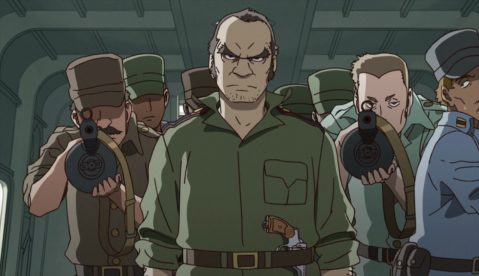 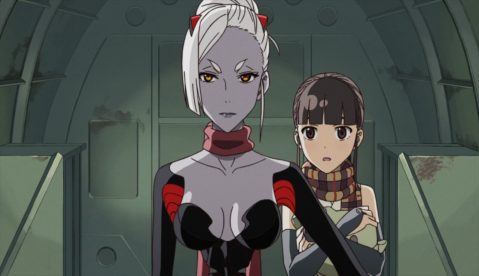 The two Dragon Dentist specials are largely a chronicle of one focused attempt at “resisting one’s destiny”, in a way – and in doing so an unlikely alliance is formed between a dragon dentist who simply cannot accept how something has turned out and has allowed herself to become a being that is the “achilles heel” to the beings that the dragons are, and also a ruthless man from another country who himself seems to be somehow “set apart by fate”. In fact, this very soldier was the one who murdered Bell – the lead male character who emerged from the teeth of the dragon in episode 1 and himself became a dragon dentist even though he was from another country under the mentorship of the young dentist Nonoko. 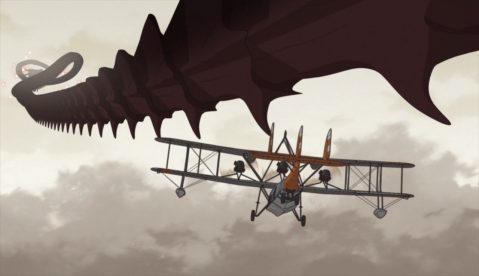 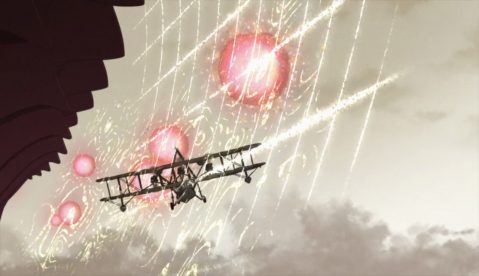 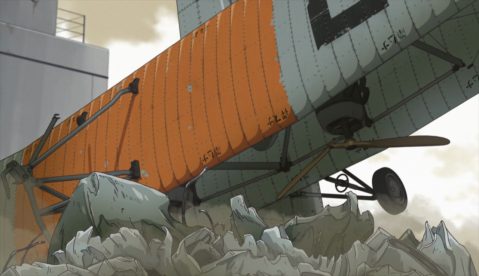 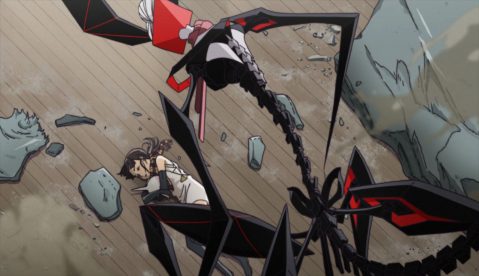 The episode itself is largely a portrayal of the fruits of the rebellion of the “small creatures” that humans are (admittedly though small they can cause extraordinary damage); the dragon is “infiltrated”, taken down through the betraying dragon dentist who has become part cavity mushi, and 99% of the soldiers of the two armies killing each other on the ground below have their heads disintegrated by the rampaging “something or other” that emerges from the wound in the dragon’s teeth caused by the betrayer. But it is only for a while, as Bell steps forward and moves the tiny lever that sets everything in motion to return to normal through the sacrifice of his own life (unbeknownst to Nonoko, who is elsewhere at the time). 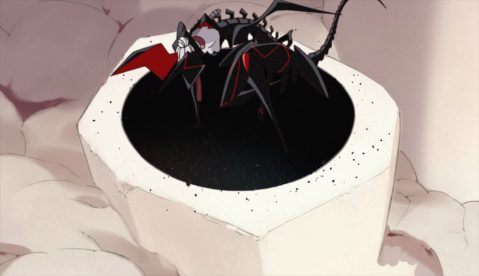 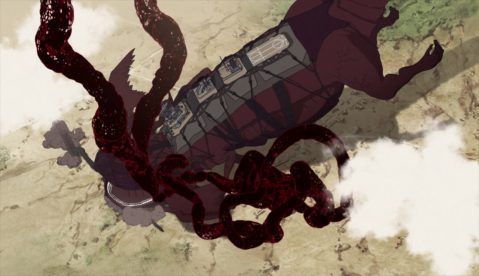 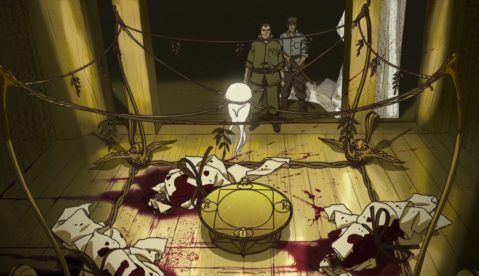 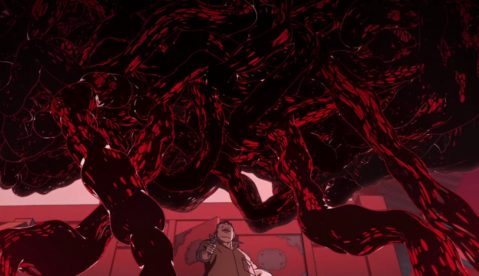 In all this, though, the question that stands out at the end of things is … Bell, a soldier from another country, was brought back to life through the dragon’s teeth, became a dragon dentist (which involved seeing how he would die), and then embraced his fate for the sake of both the dragon and humanity as a whole – where is his free will in this “assignment”, as it were, given after his death? With all this it seemed the dragon knew what the future danger would be and selected Bell as the key to preventing something terrible from taking place; something that Bell apparently had reservations about (perhaps contributing to his reasoning to want to not return to the dragon after he and Nonoko escaped from the enemy soldiers at the beginning of this episode), but eventually acquiesced to accept. So … how much “foreknowledge” do the dragons have in the events that come about? Also, are the dragons “answering” to something else? Or do the dragons somehow have a kind of “collective mind” or even “will”? 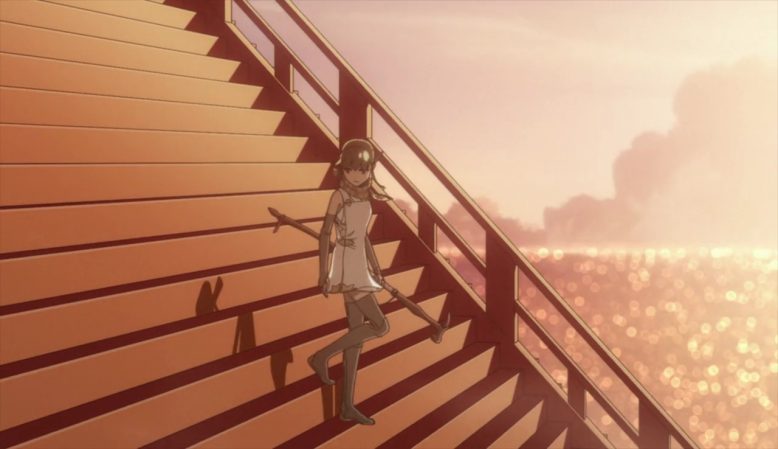 Ending with Nonoko looking for Bell somehow was a perfect symbolic image for the series….

In many ways the culmination of the tragedy and plots of those “rebelling against Fate” reminded me very, very strongly (even visually) of a similar event that took place in the fantastic Ghibli movie Princess Mononoke, but one of the biggest differences with that magnificent work is that there was some sort of clear conclusion, and even a shred of a “happy ending”. Not so in the Ryuu no Haisha OVAs. Here we are left to ponder what has happened and the last scene we are shown is Nonoka wandering the steps from the temple to the back of the dragon calling and searching for Bell, possessing no knowledge of what happened, how his self-sacrifice was so decisive in saving the dragon and humanity from the havoc that had been wrought, and possibly never having a means to know either. One is left to ponder about many things, but more than anything else I found myself pondering what the producers had “left unsaid” and hoped the viewers would mull over.

Overall these two OVAs were extremely beautiful and moving for me. I would grade them with an A- overall, and encourage people to give them a try, but with the caveat that it is actually a story that has very serious and heavy aspects to it. I don’t know if this will ever be made into a full blown series, but if it is I would be extremely interested to see what it had to say – it is a joy to come across such serious and thought provoking material as this, shot all through with very creative and detailed world building!