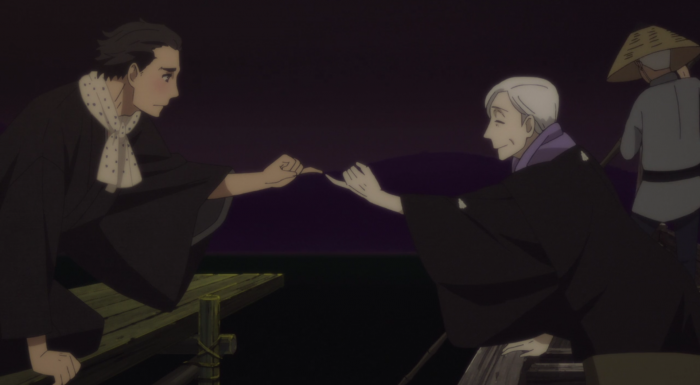 So here we are at the end of Yakumo’s….no, at the end of Bon’s story, or at least the end of this volume. I’ve hesitated to talk about religion or philosophy with Rakugo Shinju because I was still on the fence about which direction it would eventually swing, but this episode is infused with Buddhist beliefs and folklore, and especially with that uniquely Japanese concept of mono-no-aware: a keen awareness of impermanence, a gentle sadness for that which we’re destined to lose, and an appreciation of the beauty inherent in our ever-changing world. Most of all, this week Rakugo Shinju embodies the heart of Buddhist philosophy, as Bon finds a way to love without clinging, and to finally say goodbye.

To do that, though, he first needs to be able to meet the things he clings to and make peace with them. And so he goes on one last journey, his life becoming a literal road he travels from childhood to old age, encountering the people and places most important to him along the way. The seasons of this in-between realm echo his journey beautifully, as Bon begins as a child in a cherry blossom-strewn springtime before reaching the end as an old man amidst a cold but peaceful winter snow. 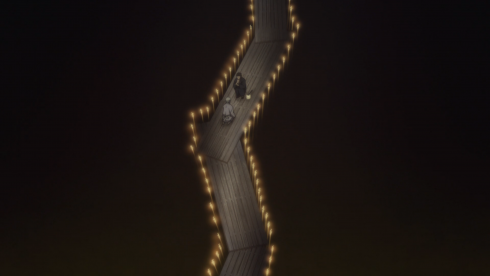 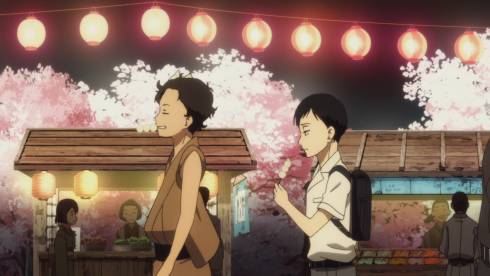 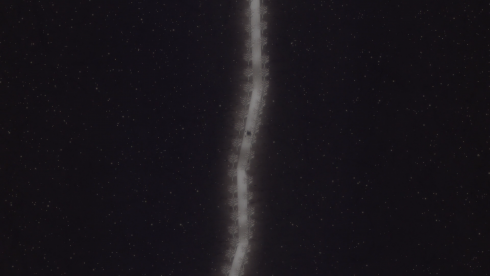 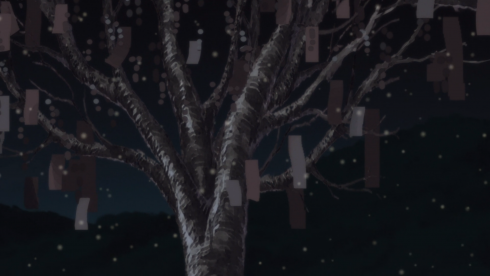 As we’ve come to expect from Rakugo Shinju, there are echoes and reflections throughout: A gateway that young Shin and Bon enter together; an intimate bathhouse where they can open up emotionally in ways they hesitate to do outside its walls; a summer festival and a riverfront where two people share a quiet moment of human connection (although in the past it was Shin and Yurie, while now it’s Bon and Yurie); our rakubros performing in an old, packed theatre with and for the people most important to them; and of course that emotions-destroying pinkie promise, which also contains an important reversal, as this time it’s Bon who has surpassed Shin, traveling somewhere he can’t follow.

There’s a nostalgic quality (or natsukashii, as we talked about a few weeks ago) to these scenes, but this isn’t a “life flashing before my eyes” kind of episode. Rather, this is a place for Bon to take care of those last scraps of unfinished business, those clinging “if only I had” and “just once more” wishes and regrets that have accumulated over the years. He can ask for and receive forgiveness (and gratitude) from Shin and Yurie. He can watch his best friend do rakugo again. He can give one more performance, at the height of his career, in the theater that was his home and for the family he loves (and he can perform “Jugemu,” a story Li’l Shin requested way back in Episode 4). As Yurie notes, the Buddha truly thinks of everything. 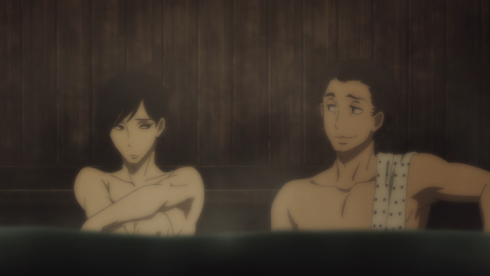 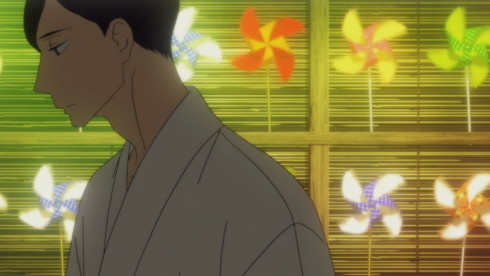 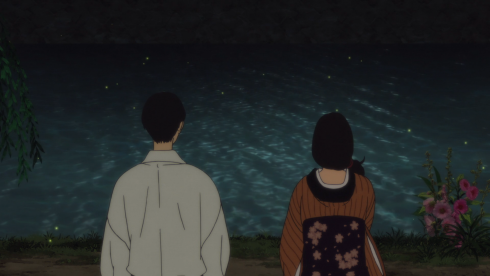 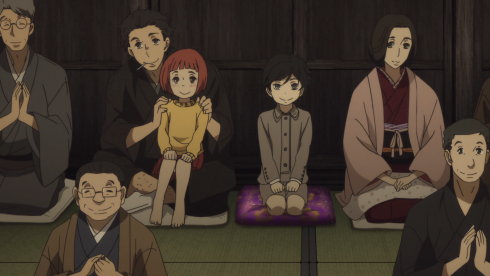 Most importantly, Bon has the opportunity to meet the two people he loved see that time has allowed their spirits to recover. His (and Konatsu’s) visions of them as vengeful spirits really was a projection brought about by his own decades-long guilt. In reality, Shin and Yurie don’t hate him or blame him, and in some ways they’re even grateful to him. They’ve found a kind of happiness in this world, and have healed their relationship to an extent.

Both characters are honest about their past mistakes and reflective on them, but it’s quiet melancholy rather than a sharp one, and often laced with a dash of accepting humor about the follies of their lives. (As Shin says, “What can you do but laugh?”) Yurie’s newfound peace is particularly heartening: She’s open and honest in front of others, “freed from the role of ‘woman'” and the cultural expectations that come with it, and able to be herself instead of trying to be what someone else wants of her. 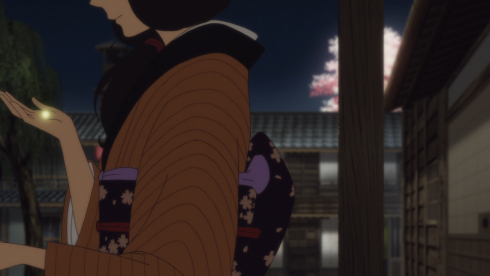 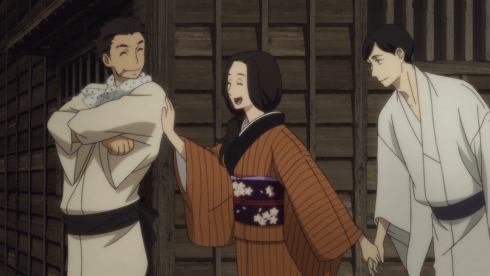 Granted, there’s a question in these scenes about how much of this is real and how much of it is an illusion, like the tasteless food Bon eats and the invisible sake Shin slurps on stage. As Bon sings at the beginning: “Is a lie the floating world? Is the floating world the truth?” Are Shin and Yurie real? Are they created by the Buddha as a way for Bon to address his past? Or is all of this imagined, a journey playing out in Bon’s head during his final moments of life? I think you could argue for all three readings, especially given how idyllic much of this plays out, and how some of the things said by Shin and Yurie (such as Yurie’s regret about not being able to show her love to Konatsu) could easily be projections or vocalizations of things Bon himself feels or wonders.

A part of me thinks it doesn’t particularly matter how you want to interpret it, since the end result is the same. But a part of me thinks it really matters, and that part of me is pretty fervently insisting that this is the literal afterlife and these are, in fact, the spirits of Shin and Yurie. Because if they are real, then what we’re seeing aren’t just Bon’s clinging desires, but Shin’s and Yurie’s, too. Shin wanted to thank Bon for taking care of Konatsu–and he wanted to know if Bon was happy that Shin had died (he wasn’t, of course, and hearing this seems to set Shin at ease). Yurie wanted closure with Bon as much as he did her. And they all desperately wanted to see a rakugo show together again, one last time.

This also, I think, explains why Shin and Yurie can’t travel with Bon just yet. By the time we reach the River Sanzu, Bon is finally, fully at peace. There’s nothing else he feels he needs to say or do. Shin and Yurie, on the other hand, both still feel lingering regrets about how they treated Konatsu. So I don’t think it’s about money, but about the feelings that still hold them captive, bound to their past lives and the world. I doubt either will be able to move on until Konatsu (hopefully decades from now!) reaches the afterlife as well, and they can finally give her the apologies and love they never could before. Something to look forward to, I suppose. 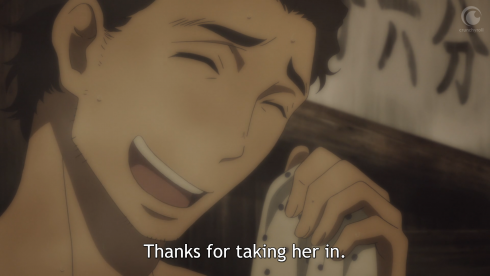 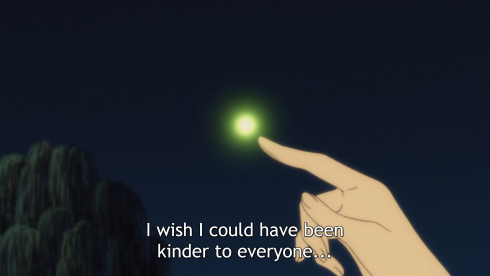 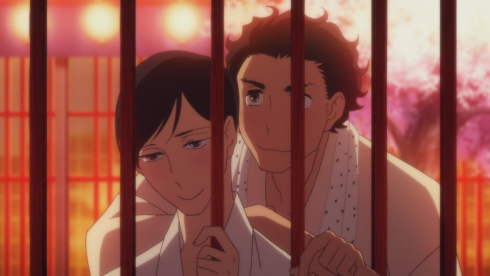 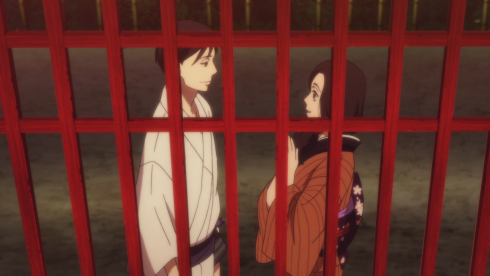 Which, of course, brings us to our final scene, and an idea that’s been swirling around Rakugo Shinju all season: The balance between loving and controlling, and between holding on and letting go. I don’t think I fully understood Bon’s desire to commit double-suicide with rakugo until this episode, when he tells Shin “rakugo abandoned me” and “I couldn’t die with it like I wanted to.” I’d been seeing this double-suicide as an act of vindictiveness, but it’s more akin to a possessive lover: It’s not “I’m taking you down with me,” but “I want you with me always, even into death.”

For rakugo to “abandon” Bon is for Bon to realize that rakugo will live on even after he’s died; it’s him accepting that the tradition will carry on without him, and will probably continue to grow and change in ways he wouldn’t expect and might not like. Better still, by agreeing to make Konatsu his apprentice, Bon accepted those changes and released his grasp on rakugo, handing it off to the next generation. It was the ultimate act of trust and love, for both rakugo and Konatsu, and one that embodies the heart of Buddhist teachings: To love without clinging, showing compassion and kindness without seeking to control the world or (foolishly) trying prevent it from changing. 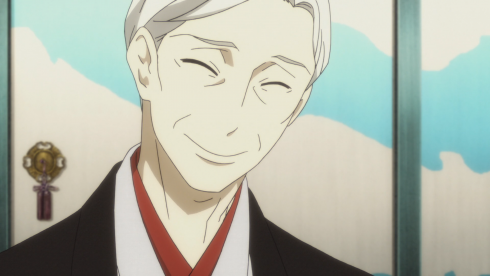 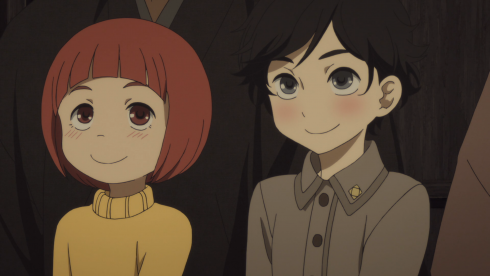 Bon was abandoned as a child and spent much of his life both afraid of human connection and caring fiercely for people, isolating himself emotionally even as he looked after others with tireless (albeit grouchy) attentiveness. He pushed Shin and Yurie away and then sought them out. He looked after his family even as he complained about them. He was insecure and contradictory, fluctuating between loving and letting go, not understanding until the very end that it wasn’t a matter of “either/or.” It was always “both.”

That’s why it’s so important that he can admit that he “died happy,” and that he can agree when Shin tells him he “liked rakugo and loved people.” And that’s why it’s equally important that he’s able to say goodbye to the one person he loved most in the world–the person whose presence, performances, and memory he’s clung to the tightest, through years together and decades apart. In the floating world of Rakugo Shinju, in order for Bon to truly move on, he has to be able to let go of Shin. 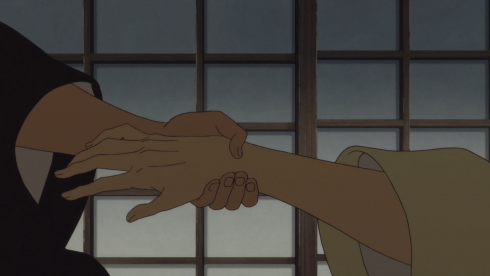 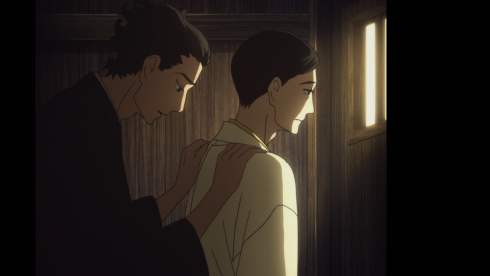 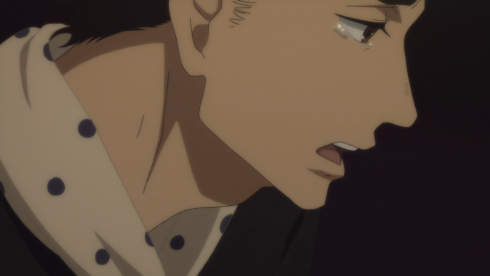 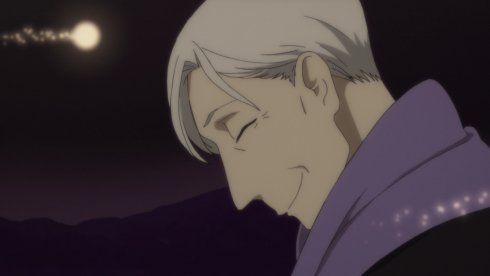 Farewells are inevitably sorrowful. Change inevitably comes with loss. Rakugo Shinju was never going to be an “and they lived happily ever after” kind of story. But Bon’s ability to not freely release his grip on Shin, but to do so with a smile, is perhaps the most perfect, satisfying, and moving finale we could have hoped for. A man who was afraid to love and couldn’t let go has learned how to do both. In the end, he found happiness and peace. There’s a promise that everyone else will, too, some day. And rakugo will live on, growing and changing as surely as the world will.

We have one episode left to see what that changing world looks like. With luck, both the family and the rakugo Bon loved have grown and thrived without him. I now feel certain that’s what he would have wanted, too.