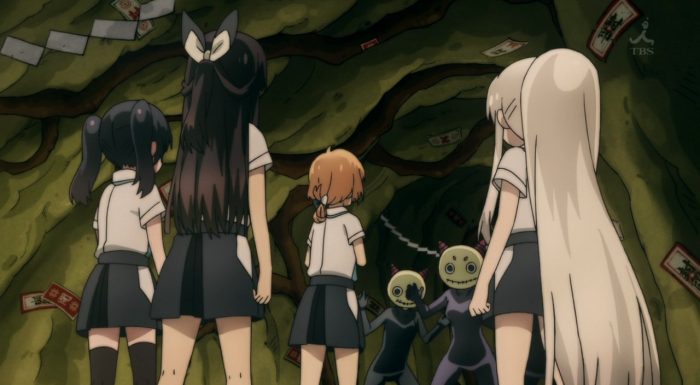 At the end of the last episode it was mentioned that the urara apprentices of Natsume-ya had passed the secret qualification exam to earn the right to participate in the test for becoming a rank nine urara, and it was vaguely mentioned that the test in question would involve a competition of sorts against other groups of urara apprentices. I must admit that when I heard this I was a bit puzzled, but after this episode everything was immediately clearer, yes, but it also illustrated just how fascinating and unexpectedly detailed the “world” the urara inhabit actually is. There are so many things about the setting of Meirochou and the “mini-culture” the urara system cultivates that I would not have anticipated! 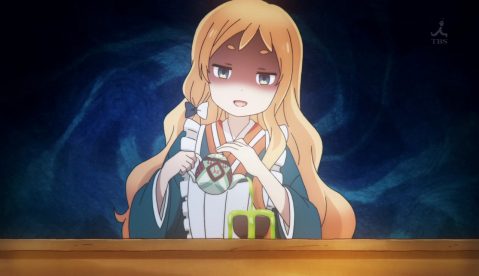 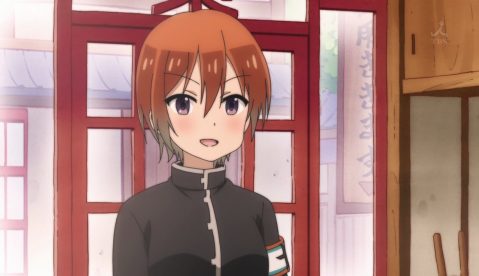 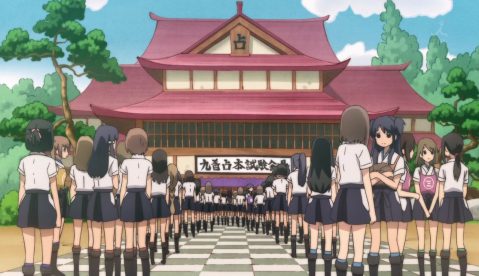 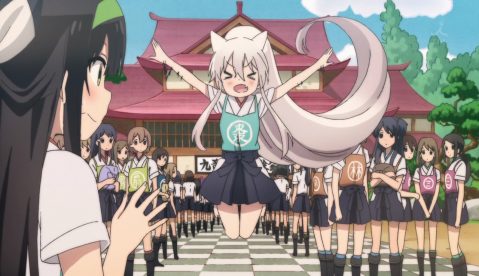 Some examples of what I am speaking about: how it seems all urara starting out at level ten as part of a group, and furthermore must at least take the level nine test as a group as well, even while the mindset of every urara having a healthy rivalry with every other urara in existence (perfectly exemplified by Kon’s mother Tokie, who is apparently the proctor of the exam this time around and seems to have quite a ruthless streak). It appears possible that after being close to other urara for a time eventually the urara branch off independently on their own? In that sense the urara are like a family as a whole throughout Meirochou, yes, but also have their own “mini families” that one becomes part of and close to before eventually “leaving the nest” and setting out on one’s own, either starting one’s own business or continuing in the steps of another urara – assuming the urara stays in Meirochou proper, of course. Such an interesting setting! 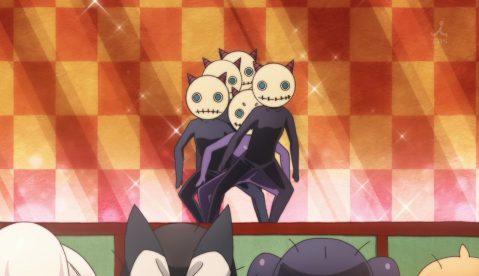 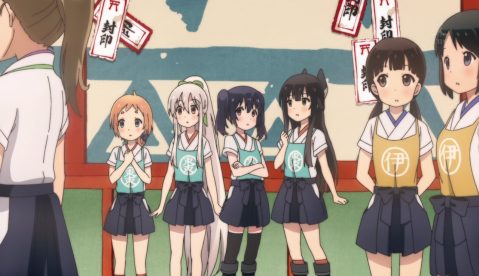 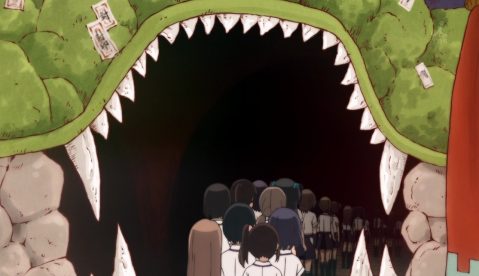 The level nine test involves ten different groups of urara, and takes place twice a year (every summer and winter), with the head proctor rotating every test. It takes place in a huge underground labyrinth below the city of Meirochou that is named “The Belly of the Cursed Serpent” – a normally sealed location known as a death trap wherein many who wander therein become lost, often permanently, it seems. (It is even mentioned that the more skilled of the urara administering the test could also permanently get lost or have their lives endangered if they are not careful.) Throughout the labyrinth the proctor has placed three large “key shaped arrows” that the urara teams are to seek out using their divination skills, which means that only three of ten of the groups pass any given test. 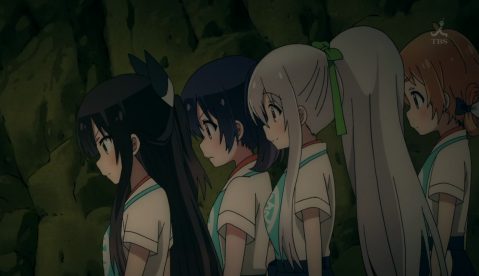 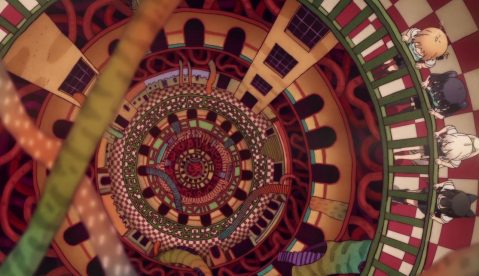 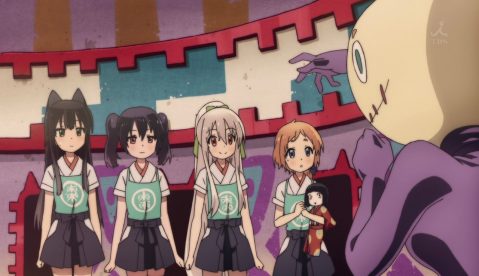 The urara teams search for these arrows while avoiding the traps throughout the maze (some of which are literally fatal) and competing against the other urara time wise, but also while trying to avoid the “oni” – who are actually the urara’s instructors dressed up in costume who seek out the urara teams using their divination skills (obviously much higher). If captured by these oni one’s team also loses. In this context one can definitely feel the weight of Tokie’s words in the opening address to everyone when she says: “Urara ought always consider each other both fast friends and fierce rivals. We proprietors are as much urara as you, rank notwithstanding. In that sense all of us gathered here are competing rivals. On this day, whether you are my apprentice or daughter holds no bearing. I intend to be just as merciless in crushing each and every one of you.” Uwah…. 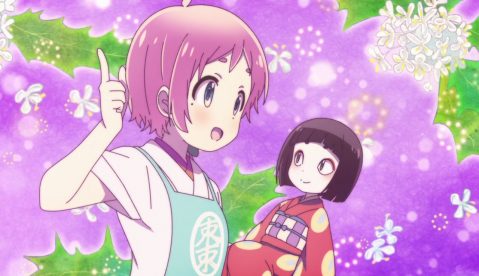 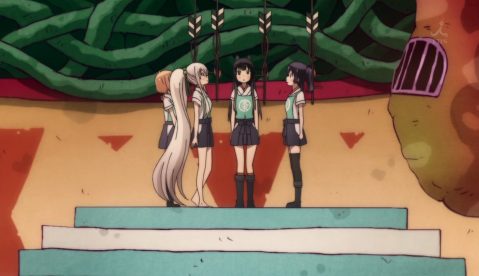 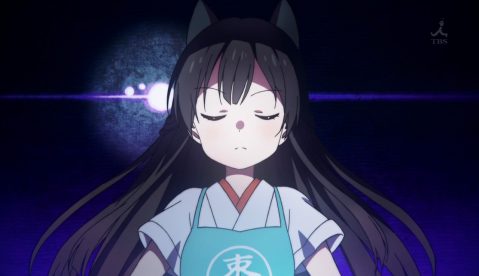 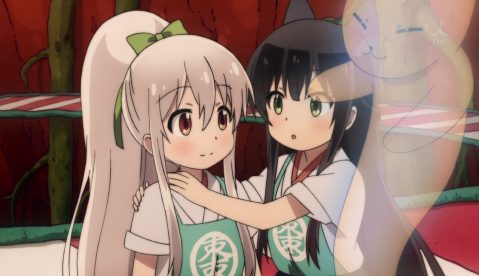 As might be expected all the girls of Natsume-ya show some of the fruits of their hard work. The effect of Nono’s chanting of the norito is effectively like a sleep spell – she uses it to save her team from being captured by a group of oni. Koume has become more experienced using her crystal pendulum dowsing technique – this is reflected by the maturation of the crystal’s spirit age wise. Kon has learned how to summon the fox spirit she contacts in the kokkuri divination directly into her body – which she uses to get clear directions to the location of one of the key arrows. Chiya is the exception, and while she does not have any method of divination per se her insane physical abilities save the group from some of the death traps – at one point she simultaneously catches three arrows a trap fires at them all – one with each hand and one between her toes! 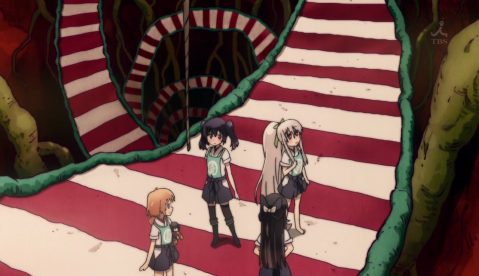 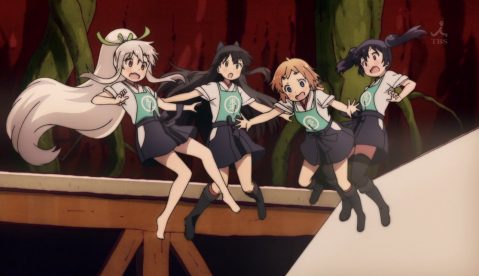 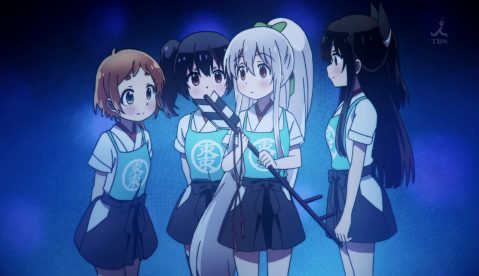 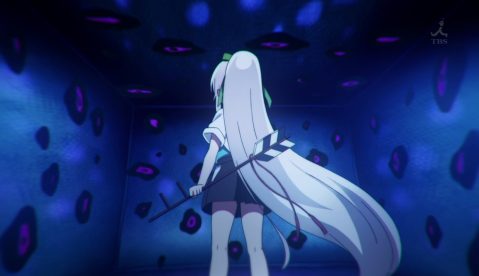 Needless to say they all work together quite nicely as a team, which is very helpful at this stage. But just when they find the key arrow something very unexpected happens. One of the Meirochou deities (presumably the black ghost with the rabbit head and cloak?) calls Chiya’s name and a split second later a series of ghostly arms emerge out of the floor and drag her down into the depths of a black, shadowy pit – and of course she is still holding the key arrow. Man … talk about a cliffhanger! In the preview for the next episode we see the … whatever it is … standing behind Chiya’s shoulder, presumably in plain sight for the other Natsume-ya urara to see? So we know that everyone is able to meet up again eventually. However, I wonder if the next episode will have some “reveals” to the many questions about Chiya’s identity and past that have arisen in the minds of many a viewer during the season thus far? Definitely am looking forward to it! ^^ 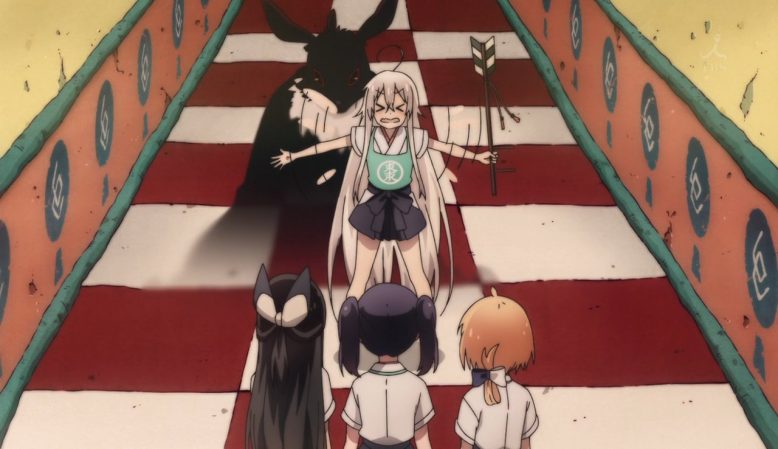