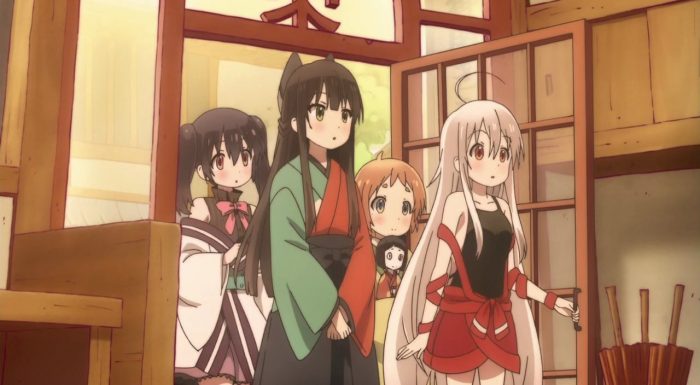 The past two episodes have shown Chiya and the gang slowly immersing themselves in the world of the Urara who live in Meirochou, and unsurprisingly the main highlights (at least for me) are seeing how Chiya responds, reacts and interacts with the “supernatural”. I mentioned before that Chiya is coming across to me as a “nature mystic” of sorts, but with more of a focus on being natural (as in a part of nature and the natural order) than being mystical per se (unlike, say, Mizunashi Akari from the Aria franchise). These two episodes kind of solidified that working theory of mine – simply put the way she interacts with supernatural things is treating them … well … “simply”, not as tools, nor with undue fear, but almost as if they were “equals” (without any pride involved, mind you). This seems to equally surprise both the beings that live in the realm of the supernatural and the humans around Chiya, but while the humans are a little puzzled, and perhaps a bit in awe now and again, the supernatural beings seem … almost delighted. 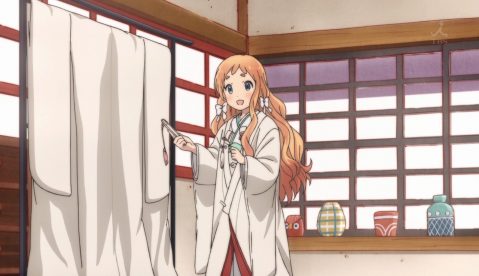 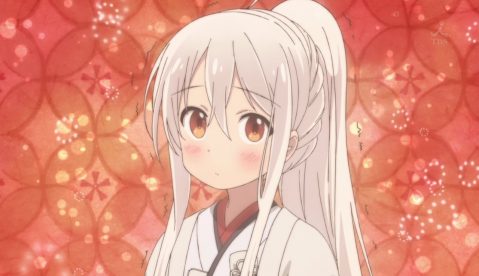 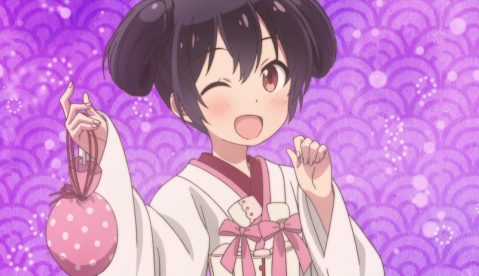 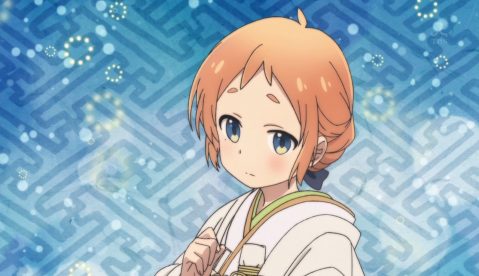 Episode five is centered around a festival day held in Meirochou when all the Urara dress themselves in traditional wedding garments, with the symbolism being that the Urara are in some ways “wedded” to the deities of the city, and with the newly arrived apprentices this is their first time participating in the event. All their personalities shine out with the traditional multi-layered clothing, and after their preparations for the festival are all done they head out to the city to see the sights. It is during this time that Kon again remembers her mother telling her about how one should not inquire too closely into the deities who provide the divinations the Urara receive, but that the gods will sometimes speak to or even interact with those whom they have set aside, or chosen. (For those who remember the first time this came up was in episode two after the shooting star divination.) 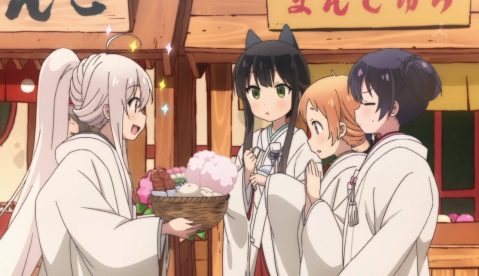 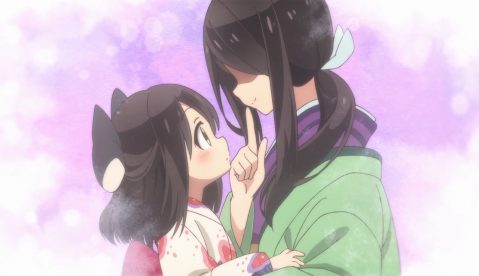 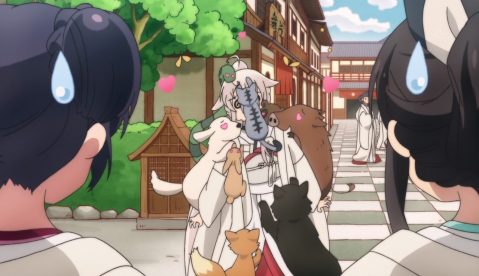 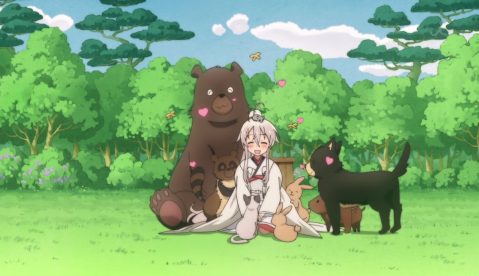 At one point the Urara come across a free table of tiny portions of alcohol for the festival goers, and when Chiya partakes it becomes clear that she has almost no tolerance for alcohol at all. But something else happens too – it is as if a “limiter” of sorts inside of her is switched off, and her nature mysticism resonates out in full even though her usual rationality is only slightly impaired. Immediately not is she pounced on by all manner of animal, but as she leaves the city more gather around her. It is then that the event foreshadowed in episode 4’s preview finally happens. After napping for a bit what appears to be one of the city’s gods approaches her from a distance – an upright walking man sized rabbit headed something wearing a tattered black cloak. But one of the more interesting things for me was that as it was approaching all the animals with Chiya at the time noticed it and left the scene. Chiya tries to talk to it a little bit, and her cheerful frankness and kindness seems to … charm it. o.O Shortly after what appeared to be an attempt of it trying to speak to her (was this the same thing that called Chiya’s name in episode two?) Chiya … blacks out, it seems. 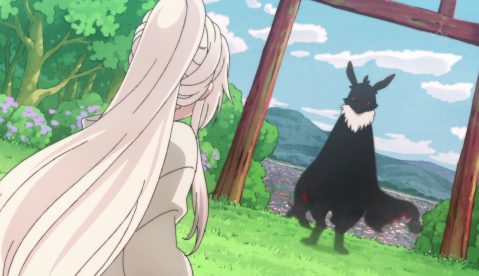 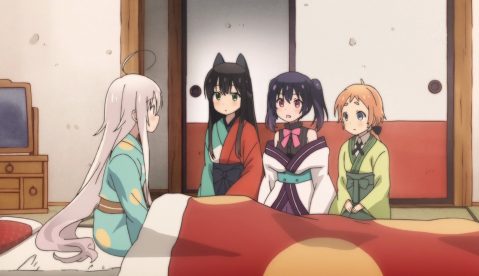 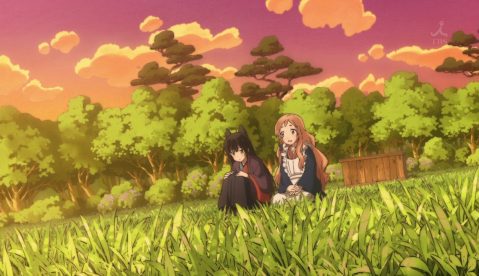 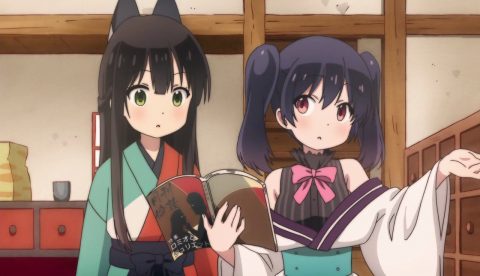 Fortunately Chiya is found some time after by Saku, who brings her back to Natsume-ya, and it turns out that Chiya has a cold, though for the first time in her life – healthy as an ox along with having incredible physical abilities, it seems. When she mentions “seeing a monster” in the meadow where she was Kon immediately understands the significance of what happened and … very interestingly responds a bit with … jealousy, or perhaps rivalry. Of course she and the others nurse Chiya back to health – they are all very fond of her – but when Kon has some free time she goes out to the meadow by the Tori where Chiya saw the “monster” (had the vision?) in the hopes that she would also be able to see it, perhaps, but also to think about things. It is there that Nina finds her and the two speak a bit about Kon’s feelings of rivalry for Chiya. And in many ways this was one of the most interesting pieces of content of the episode: Nina says it is okay to also want to see, experience understand such things, but when lined up with Kon’s mother’s advice it apparently should stop there – it’s when the next step is taken and one tries to “force” the “other” to “do what one wants” that things apparently can get mighty sticky, there even being cases where the deities of Meirochou would strip an Urara of her abilities! 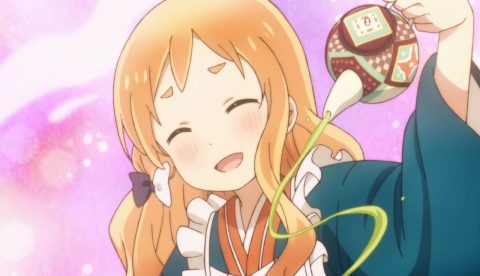 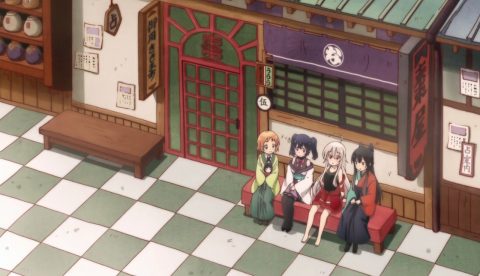 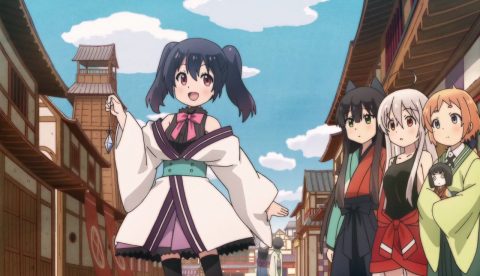 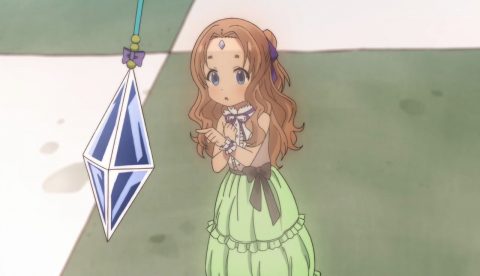 Episode six turns the gaze of the viewer back towards the other Urara for a bit and focus some more on their adopted methods of divination and some of the shortcomings and drawbacks associated therewith. The first focus is on the twintailed Western European culture loving Koume. Whereas before it didn’t seem like she knew much about tarot (other than building a card house with them) we see her preferred method in this episode: a sort of crystal pendulum based variant of “dowsing“. In the episode it is shown that the way the dowsing works is by the crystal itself being inhabited by a sort of miniature fairy. Dowsing is traditionally used in connection with finding certain types of elements in the earth (water veins, minerals, etc.), but here it is shown as much more “multi-purpose”. 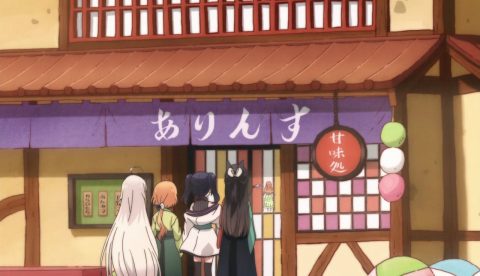 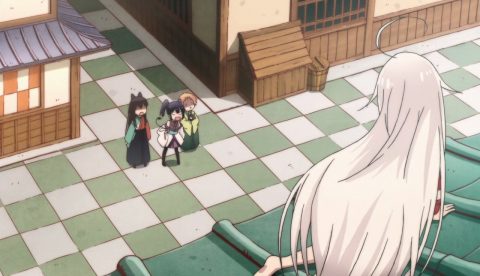 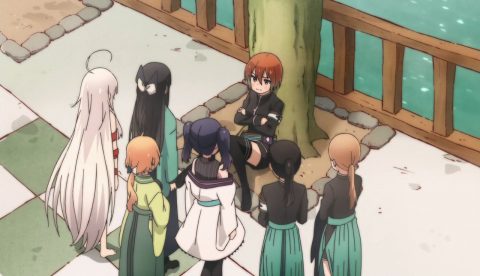 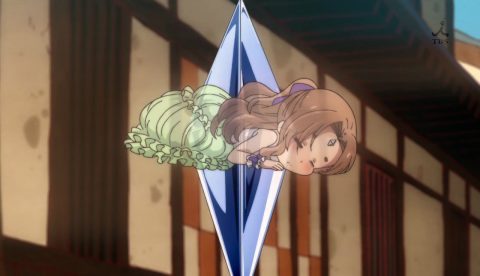 In many ways one of the things this episode shows is that Koume is probably the most reckless of the group (although reckless in a much different way than Chiya interestingly) – she has no qualms in trying her divination methods even in situations that Nina has told her are extraordinarily difficult for all but the most advanced of the Urara, and later on in the episode behaves in a way that disrupts another divination attempt proper; the result of the former is her poor little pendulum crystal fairy being totally exhausted (and not even really able to finish the job – poor thing) and the result of the latter was “opening the door” and … causing some potential big problems. After the focus on Koume with the dowsing divination attempt the focus swung back to Kon and her preferred method of Kokkuri. It seems that the fox spirits summoned and asked questions during this method of divination have a preference for reverence and proper procedure first and foremost – if not held strictly to they sometimes possess the soul of those involved in Kokkuri, and that is exactly what happens to Koume in this case (and then Nono and finally Kon herself). 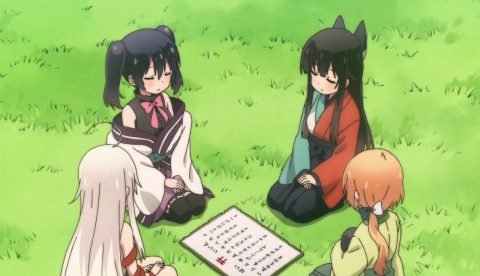 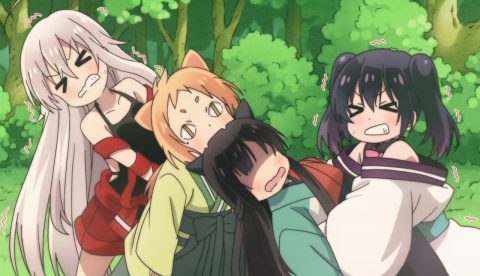 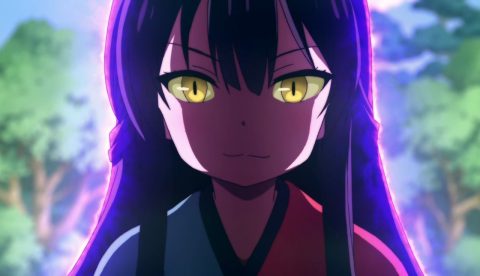 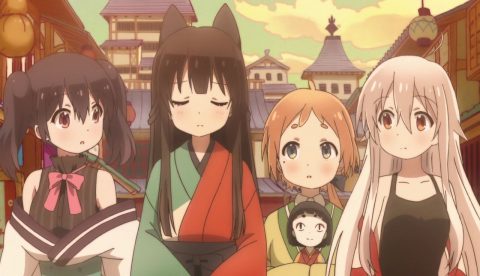 Once again, though, the most fascinating part of the whole sequence of the fox spirit possessing the other Urara is how Chiya responds to it. Essentially she treats the fox spirit (despite any shows of supernatural power) as she would treat a living fox, and even tries to discipline it, telling it that what it is doing is wrong: “Bad fox! Bad! Don’t do that!” kinda on that level. And she disciplines the fox by tickling it under the chin. Later on when requesting the fox spirit to leave Kon, even after the spirit admits liking Chiya very much and making her his own and her refusal, she prostrates herself before it, imploring it to go out of her dear and close friend. And the fox spirit is … touched, actually. Touched and perhaps even charmed a bit at this human who interacts with it in such a natural and normal way. 🙂 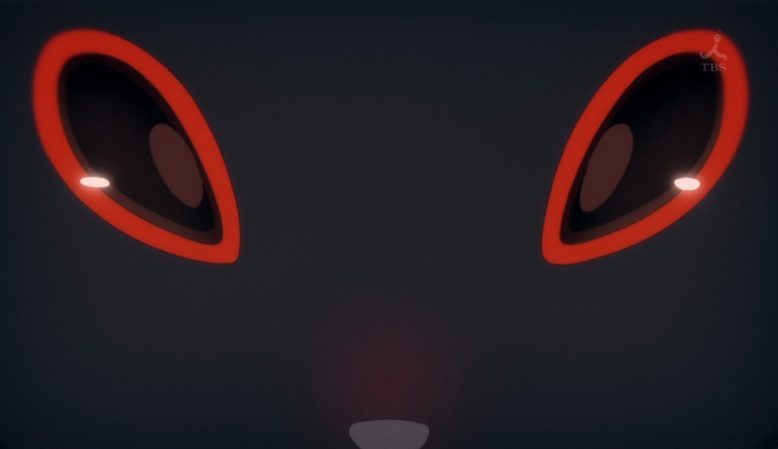 Chiya is so adorable she even makes deities blush….

Now we are at the half way mark with this series and I must say that it has been both interesting and enjoyable for me through and through. If there were any changes I would like to see the only one I can think of would be a little more character development for Nono in the realm of her being an Urara to balance things out, yes, but I would also like to see the Urara pass some tests and get access into different parts of the city. I definitely would not mind getting to know a but more about the city itself and the entire setting as well (which is definitely one of the strongest selling points of the series for me). All in all well done thus far, and looking forward to more of the same. ^^