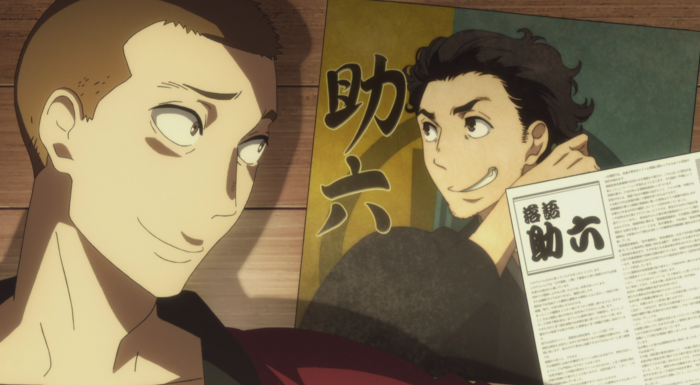 Things had been looking up for our rakugo family as of late, but that may have just been the long slope to the top of a very steep drop. The final performance this week was so magnificently staged and such a major turn in the narrative that it’s tempting to ignore everything else and just focus on that, but there are a lot of tiny (and more optimistic) milestones that happen prior to it, and I’d be doing Rakugo Shinju a major disservice if I didn’t touch on them. Yakumo may be in a desolate place right now, but that doesn’t mean everything is.

Yotaro is forever our light in the darkness, and this week sees him moving further along that path to self-realization and finding his own rakugo. Yakumo has been an excellent mentor, but it’s really Higuchi who’s pushing Yotaro forward now simply by virtue of not telling him how to do things. He offers recordings and philosophies, but ultimately he asks Yotaro “How do you feel about rakugo? What do you want to do with it?” Yakumo’s difficult to read at times, but it feels like with “Inokori” he was trying to push Yotaro into a performing style similar to Sukeroku’s, where the storyteller’s own charismatic personality is the dominant feature. Higuchi, meanwhile, just wants him to find his own voice, to perform rakugo on his own terms, regardless of how others have done it in the past. 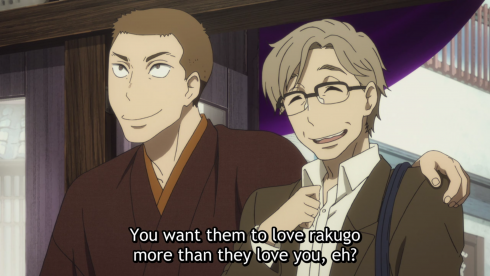 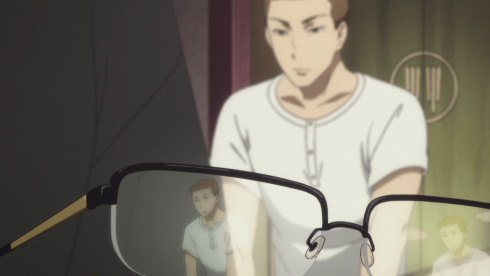 With that encouragement, Yotaro realizes he simply isn’t an “ego-driven” performer. He doesn’t particularly care if people like him. He wants them to like rakugo: the stories and especially the characters that inhabit them. Rakugo was an inspiration to Yotaro when he was at his lowest point. As he told Yakumo a couple weeks back, hearing about these flawed characters getting out of scrapes gave him hope for himself. Yotaro wants to be a vessel for those people and their stories. So for him, it’s not about “who am I?” but about “who is this character I’m portraying?”

I think much of Yotaro’s change in direction comes from the contentment he now has in his personal life. Unlike our past rakubros, Yotaro has an openly supportive family and friends he feels comfortable around, so he doesn’t need the approval of the audience (like Sukeroku did) or an outlet where he can express the parts of his personality that he normally has to hide (like Kikuhiko/Yakumo does). By having his tattoo finished, he’s even accepted the parts of himself he was so eager to abandon before. The stage isn’t something Yotaro needs, but rather something he wants. And if that’s the case, then it stands to reason that having fun and sharing that fun with others would be his top priority. 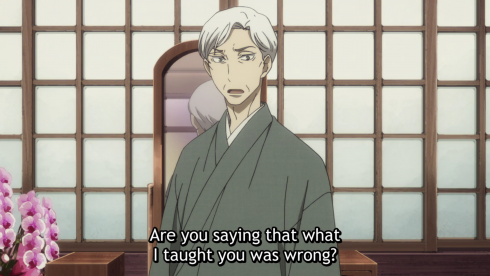 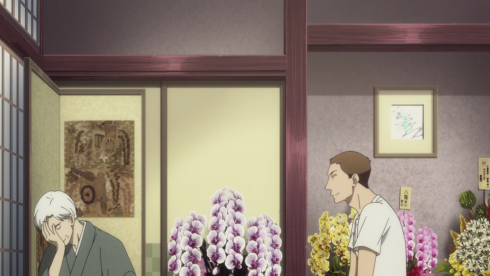 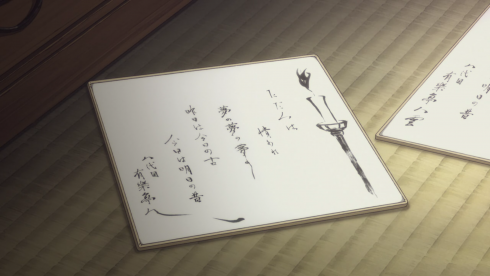 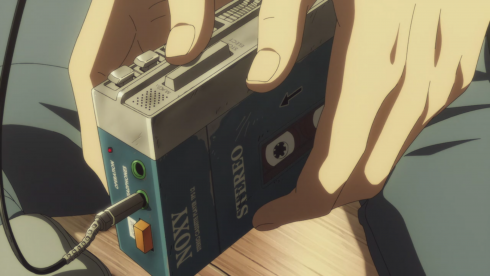 It’s the first time we see Yotaro actively defy Yakumo, which speaks to the generational shift (from calligraphy to cassette tape, as the visuals tell us) and movement that’s been steadily occurring since the season began. That change is both professional and personal, and there are some surprising moments this week that suggest Yakumo is not only acknowledging those changes as inevitable (his poem above is all about the transitory nature of people and time, by the way), but also tentatively trying to show his family that he trusts them to carry the torch.

He accepts the offer of a “family performance” and assures Yotaro that he’s confident his student will be ready for it. He compliments Yotaro’s finished tattoo, and while he does challenge Yotaro’s defiance regarding “Inokori,” once he sees his student’s enthusiasm and sincerity he acquiesces with his usual “do as you like” (and Yotaro’s pleased grin suggests this is tantamount to a blessing from his stubborn, withdrawn teacher). Yakumo’s prickly faith doesn’t end with Yotaro, either: he also insists on Konatsu being a part of the family performance, and even entrusts her with knowing the right moment to light the incense. His “I’m counting on you” is the most openly supportive we’ve ever seen him with Konatsu. These are all promising signs–which, of course, only makes our final scene all the more painful. 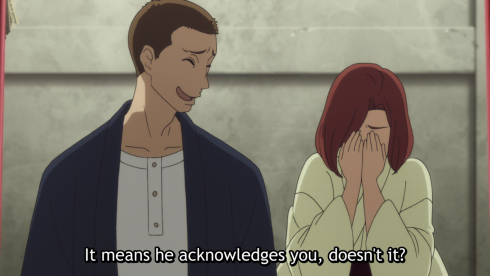 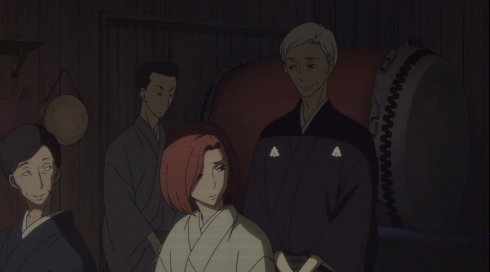 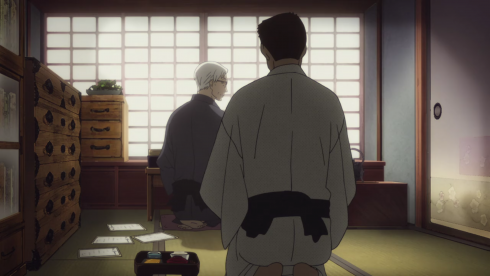 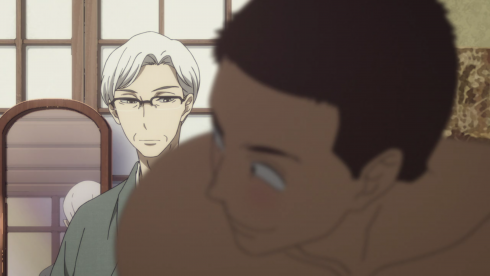 But before we get to that final scene, a moment of appreciation for the blocking this week, which conveys a lot about character relationships that the dialogue can’t (especially given that Yakumo is almost always performing to some extent). When two characters are facing the same direction or one another, they’re communicating and meeting more as equals. When someone is facing someone else’s back, it often denotes that they’re struggling to communicate, or that they’re “behind” the other personal in development (personal and professional). We’re clued in to the importance of literal positions to convey figurative ones right from the start, as Yotaro sits behind Yakumo and we’re constantly treated to shots of Yotaro peeking over his shoulder or staring at his back.

Despite Yotaro’s joy that he and Yakumo are “side by side” in the poster, he spends most of this episode facing Yakumo’s back. That said, the two do progress from a total one-sided conversation at the start of the episode to a more equal back-and-forth in the dressing room, where not only do the two face each other for large portions of the conversation, but Yakumo even takes a brief moment to look at Yotaro’s back. It shows how the two are able to connect sporadically, as well as how Yotaro is still behind Yakumo in terms of his rakugo, but is slowly catching up–and how Yotaro may very well have surpassed Yakumo on his character journey, given that Yakumo admires his tattoo (a symbol of Yotaro coming to terms with his past, something Yakumo has yet to do).

Elsewhere, Higuchi and Yotaro are almost always facing each other. Yotaro and Konatsu seem to meet each other from all kinds of angles, although Konatsu does stand behind him when he’s had his epiphany about loving the characters in rakugo more than his own performance. And fascinatingly, Yakumo stands behind Konatsu during their scene, suggesting that Yakumo (1) is awkwardly trying to connect with her–to show that “acknowledgment” Yotaro notes–by giving her this task, and (2) has fallen behind her in terms of overall growth. Given that she genuinely seems to have found happiness as of late, that’s not so surprising, really. 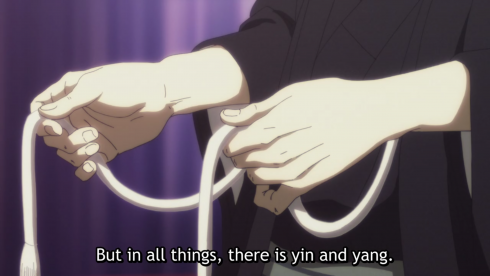 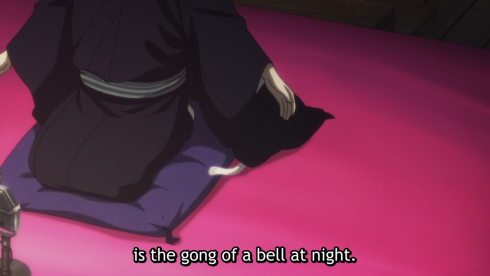 And then all of these building changes and tentative bonds abruptly collapse in the final scene, although not before Rakugo Shinju can dazzle us with one last(?) enthralling Yakumo Performance. For all that Yakumo wants Yotaro to put his “ego” into his work, Yakumo’s own storytelling style is very similar to the “become the character” approach that Yotaro says he wants to bring to “Inokori.” Yakumo transports the audience into the story’s world, fully embodying the characters within it. The camera takes special care to show the removal of a robe, the tap of a hand, the shift of sleeves as Yakumo transforms from one personality to another, not just telling the story but becoming it.

The barrier between sincerity and performance–between “Bon the man” and “Yakumo the rakugo-ka”–has been paper-thin for a long time now, so it’s no surprise that, as Yakumo’s health fails him, that barrier dissolves entirely, merging the fictional with the real in an indistinguishable blur. As the incense in “Hangon-ko” calls upon the spirits of past lovers, so too does Yakumo see Miyokichi in the trails of smoke. She laughs cruelly, and we’re reminded of her promise: “The next time I see you will be in Hell.” As the candles in “Shinigami” represent the amount of life a person has left, so too does Yakumo, on the edge of death, find himself in a hall of burning candles, staring at his own death god. Sukeroku, given a voice at last, is puzzled and apologetic as he slams Yakumo against a broken balcony and slowly chokes the life from him.

This is Yakumo’s emotional reality, the world as it feels to him as he collapses to the stage and struggles to breathe, and it is utterly devastating. 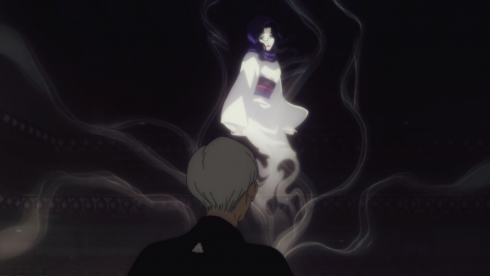 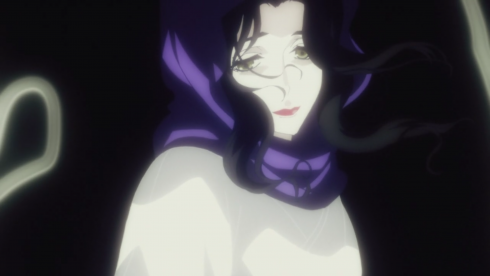 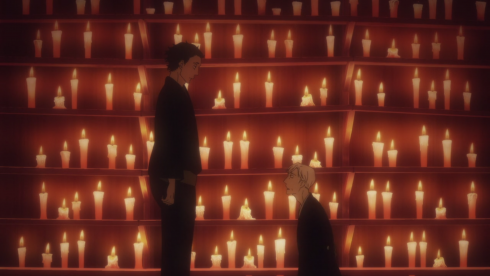 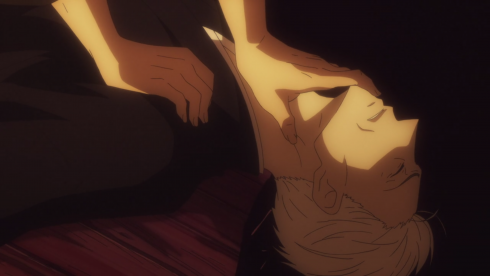 So what does all this mean (other than that I was so gobsmacked I forgot to take notes and snap screenshots the first time I watched it)? Well for one, I’ll be shocked if it means the end of Yakumo’s story. He’s hanging from the precipice but he hasn’t fallen yet. There’s still an unfinished character arc here, so while this collapse will likely spell the end of his performing days, I doubt we’ll be saying goodbye to our grouchy master just yet. (Of course, having to wait a week to find out for certain is going to ruin me, but that’s neither here nor there.)

Given the incremental steps this episode took in bridging the emotional gap between Yakumo and Yotaro/Konatsu, I suspect this is a kind of “one step forward, two steps back” moment. For all Yotaro and Konatsu’s growth, and for all that Yakumo seems to have been actually looking to the future this week, he’s still never really addressed or come to terms with his past. He’s stewed in repressed trauma for years, refusing to forgive himself. His detached persona is built atop a cracked and fragile foundation. So of course when he’s at his weakest, his self-control and deflection tactics are going to fail him. He’s going to fall back on his most intimate self, on those long-lasting feelings of guilt and self-hatred. He’s going to imagine death as the two people he loved laughing and strangling him, taking their vengeance for a double-murder he’s still convinced he committed. 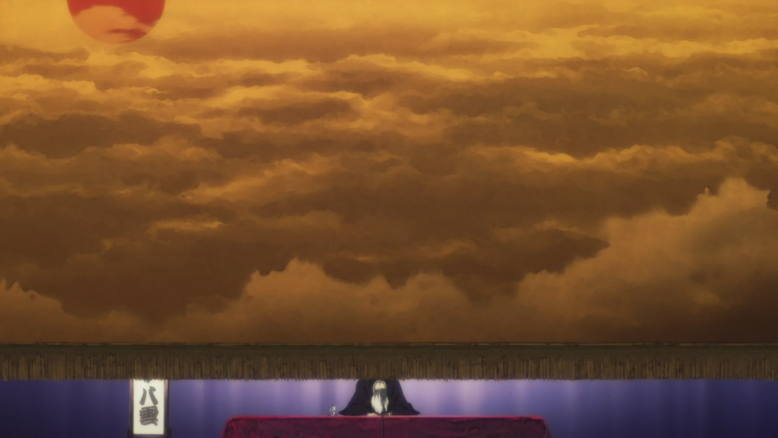 The sun sets and the curtain falls on the Eighth Generation.

Even if Yakumo does survive (which, seriously, he damn well better), it’s going to put Rakugo Shinju in the darkest place it’s been in weeks, and I suspect this trauma will only lead Yakumo to be more withdrawn and fatalistic than ever. Even so, I still firmly believe his story doesn’t have to be a tragedy. We have a whole half a season left. Rakugo isn’t dead yet. And Yakumo still has his cobbled-together family: Yotaro, Konatsu, and Li’l Shin. There are candles in this darkness, however low and flickering they may be. Maybe they can pull Yakumo and rakugo back from the precipice yet.