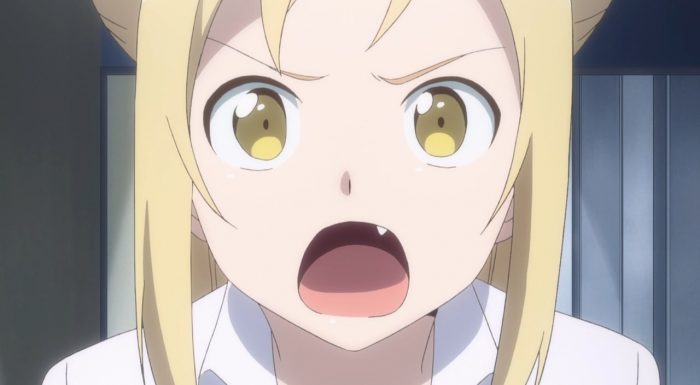 If I were to say one thing about this episode, it would be that Hikari is awesome. Actually, a lot of stuff happened in this episode, but Hikari’s scene overshadowed it all in my eyes. Which is saying something, because there’s some really notable stuff here.

Let’s start there, with Hikari’s confrontation with the gossiping girls. I wouldn’t call these two bullies exactly, because they aren’t directly picking on anyone, nor are they deliberately spreading hurtful rumors around: they’re just trash-talking people behind their backs among themselves, because talking down about other people makes the two of them feel better about themselves by comparison. Not that I’m trying to justify their behavior: it’s still a bad thing to do and can really hurt people, particularly since they don’t really make any effort to ensure that no one else can hear the various pieces of slander they’re spouting. But at least they aren’t directly trying to pick on anyone. That may be why Hikari’s talk with them works out the way it does. 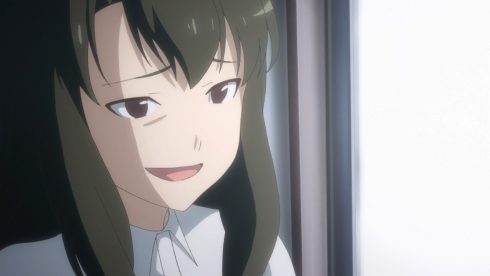 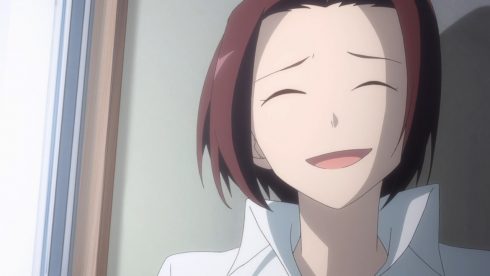 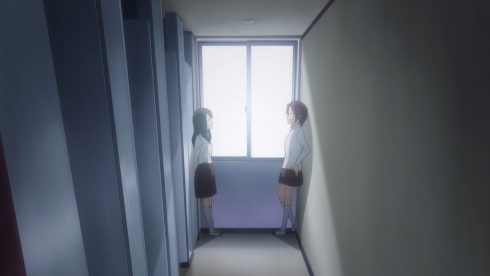 And that is a talk. For a girl whose life seems to be about being playful and fun and hardly ever taking anything seriously, Hikari has some very strongly-held opinions when pushed. Really, that may be what makes this segment hit me so much. When a genki, fun-loving girl stops smiling and gets seriously angry at these two girls, you know it’s serious business. Her point is pretty simple, really. What they’re doing is wrong. They know it’s wrong. And any time she finds out that they’re doing it, she’s going to come back to them and tell them off about it to their faces. Because that’s who she’s chosen to be. If she has something to say to someone she says it to them directly. Because she’s chosen to try to live without any regrets. “Everyone hurts people, so you think you’re allowed to hurt people? Aren’t you ashamed to say that?!” There is an honest and straightforward strength to her words, and the two girls are repeatedly knocked off-balance by her directness. She feels so strongly about it that she works herself up into tears. Fortunately she can go home and cuddle with her sister a bit to recover. 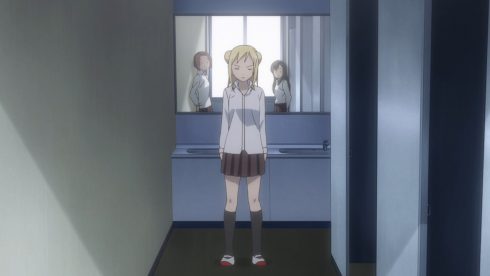 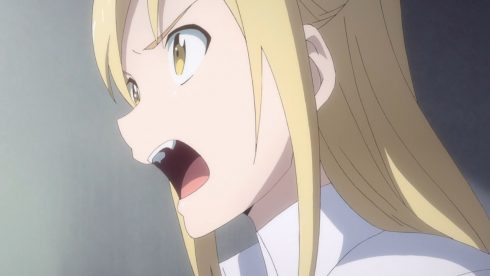 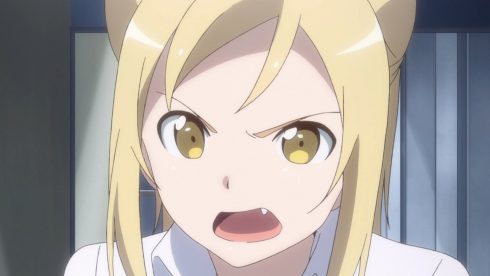 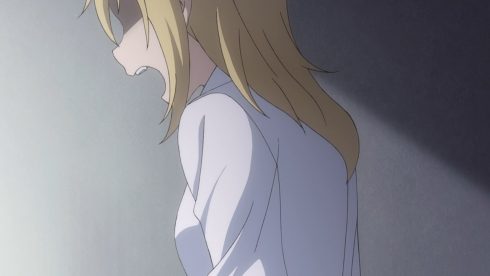 Hikari’s confrontation with the girls gives Yuki some ground to stand on to talk to them as well. But while she, quite frankly, has an even better right than Hikari to yell at these two, instead she apologizes to them: explaining that the behavior they’d been trash-talking her for wasn’t what they’d thought it was. With the two girls already off-balance from Hikari’s confrontation, Yuki choosing to apologize to them rather than get angry pretty much ruins any chance of them recovering their previous attitude. Between the two of them, Hikari and Yuki may have managed to stop this whole problem altogether. 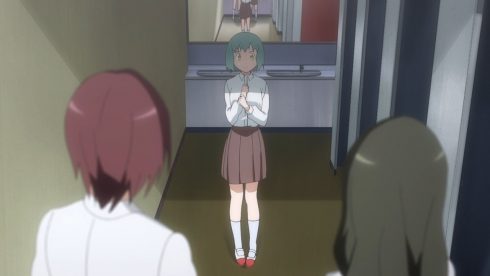 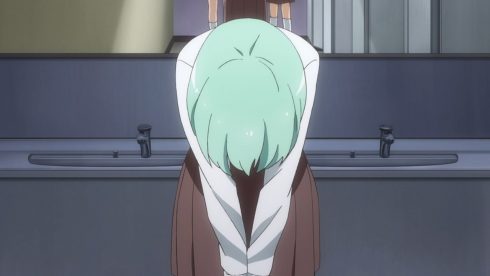 Let’s move on from that scene, since there’s plenty of other things to talk about. Like Satou-sensei. I’ve seen plenty of people saying they find her behavior amusing, that they’re happy she offered to help out the girls, that they feel sorry for her for being attracted to Tetsuo but unable to even get a hug, etc. Speaking as a manga reader, I can’t help but be a little uncomfortable with how the anime has been portraying Satou-sensei. In the manga she generally kept her cool, confining her strong reactions to her thoughts, or to times when she was alone at home. She didn’t comically overreact to things the way she does in the anime, she doesn’t speak her inner desires out loud and then flail around in a panic, she generally maintains the image of a calm adult. While that is just an image, as discussed with Kyouko last week, it is something she has built up through years of deliberate self-control. Seeing the anime reduce her to someone who says and acts out everything she’s thinking, who then panics when she realizes what she’s doing and flails around comically… it’s like I’m looking at a completely different character. While this different character isn’t a bad person, she isn’t the person who I grew to like quite a bit when I met her in the manga. 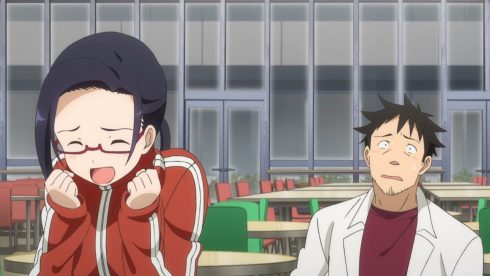 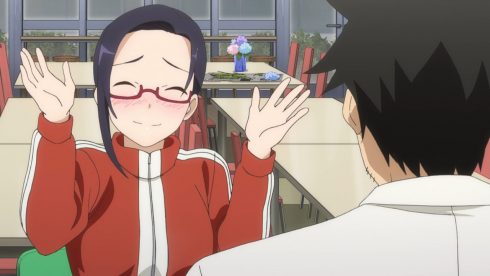 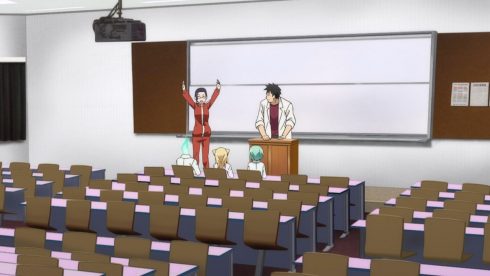 Anyway. That’s the only thing that bothers me about the episode and the series so far. Back to something I do like. Himari’s talk with Tetsuo on the walk home is very nice indeed. We’ve seen lots of little pieces of evidence that Himari and Hikari really care a lot about each other, from their matching vampire bat charms on their bags to Himari giving Hikari a lap to rest on after the confrontation with the girls, despite not knowing what happened. Despite being the younger twin, Himari tends to come across as the more responsible sibling, and she looks out for her sister in a lot of small but important ways. It’s not surprising that she’d be concerned about this teacher who’s been showing an interest in her sister. There’s lots of potential for something bad there, if Tetsuo wasn’t the sort of person that we know he is. Fortunately, as they talk she sees that he isn’t the person she was afraid he might be, and also that his view of Demis is something that would be good for other people to hear. Of course, then Hikari messes it up with an ill-conceived text. Fortunately again, it gets explained once Himari gets home and shouldn’t have lasting consequences. 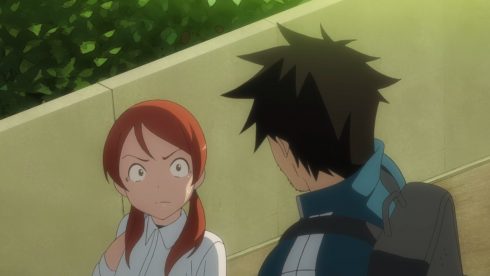 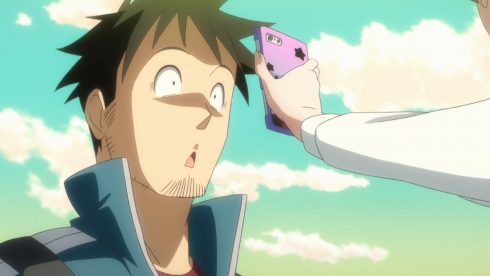 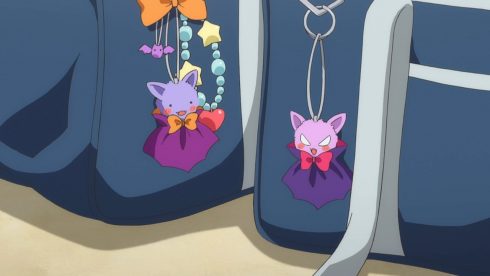 This was a good episode. Between Hikari being awesome, Yuki formally being brought into the group, and the sisters just showing how close they are, there was a lot here to enjoy. I haven’t seen anyone else, not even other manga readers, object to Satou-sensei’s characterization, so that may just be a personal issue for me. I’ll try to avoid bringing it up again, but I felt that I had to mention it at least once. But even with that, this episode was full of goodness. Next episode looks like we’ll be getting more fully into Yuki’s story, hopefully resolving the issue that has her isolating herself from everyone else. I’m looking forward to it. 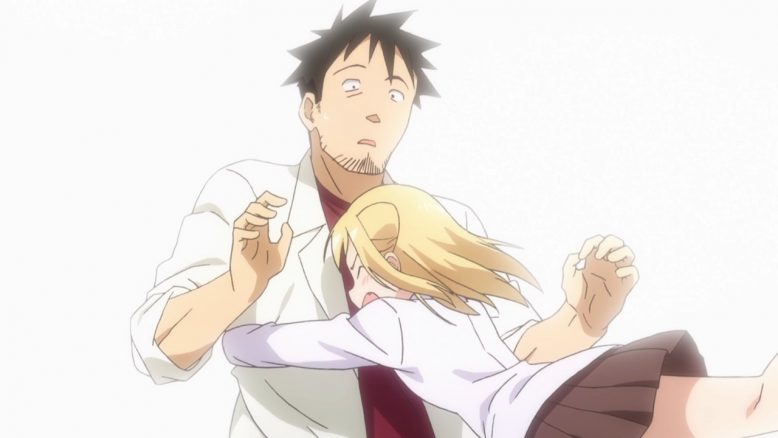