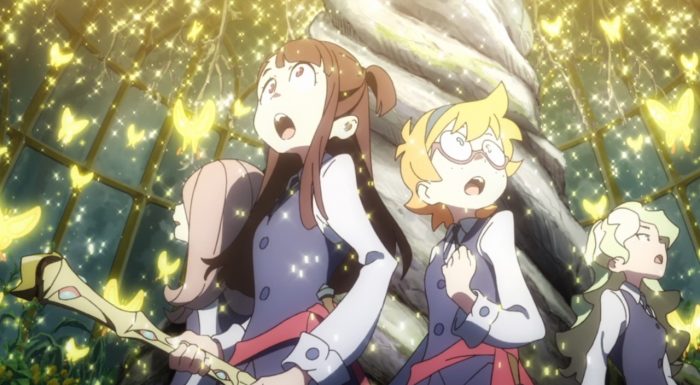 I suppose it wouldn’t be the easiest thing in the world getting dropped into a specialized school while knowing very little of the foundational knowledge. Akko has definitely chosen an interesting path for herself. I could believe she’s one of the very rare few normal people to go to this school. It might have little to do with inherent ability, but rather access to information. Witches like Diana know so much more than someone like Akko who really could only pick up magic from Chariot’s magic shows and a magic kit she ordered once. Although I suppose this episode wasn’t as much about the difficulty in learning magic for Akko, but a bit of reality on what this school will involve. Unfortunately it means a lot of history and ‘boring’ topics. 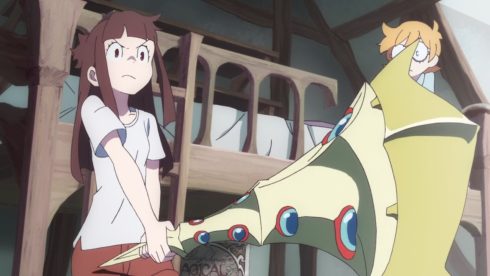 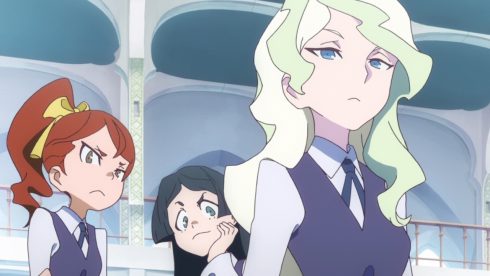 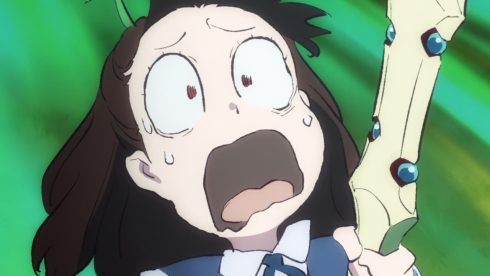 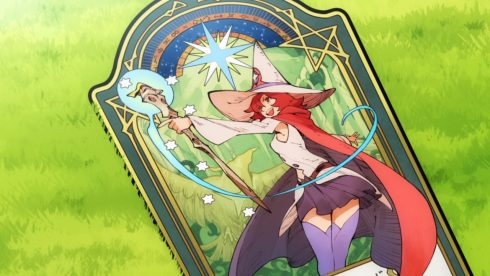 Of course the big shock for Akko is that Shiny Chariot wasn’t a very popular person in the witch community. Her magic was great for performances, but apparently didn’t have the solidity these people look to and respect. I have my doubts about Diana having anything against her. There was a girl in episode 1 that looked somewhat like her. Maybe it wasn’t Diana, maybe it was a relative, and maybe her feelings changed from back then. But regardless it seems plausible that she liked Chariot more than she lets on. But there is still probably only a minority that really cared for Chariot.

That’s reality though. Even the people in Akko’s world moved on relatively fast. Though that might be more because Chariot herself simply vanished from the limelight. There is no telling if she actually lost popularity and then vanished or vanished and lost popularity. Considering Akko randomly found her staff it could mean she disappeared for a particular reason. No doubt we’ll get some answers to that soon enough. 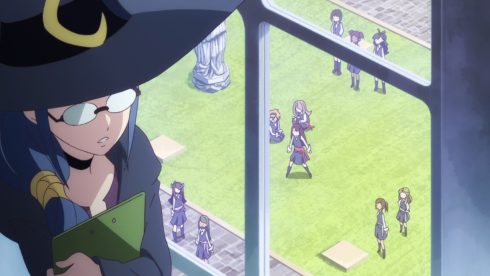 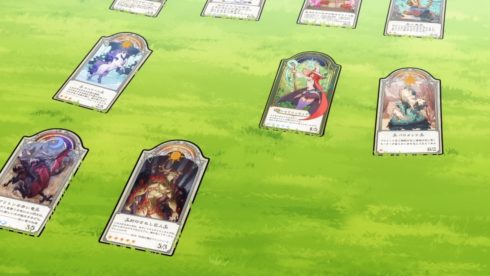 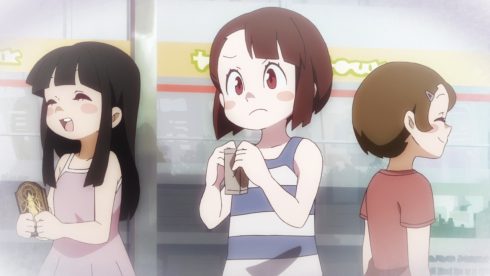 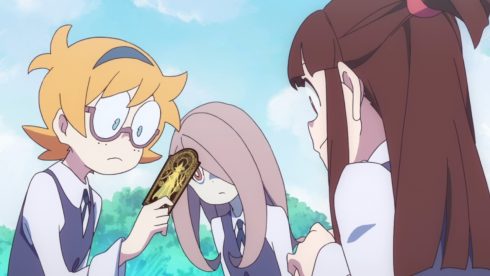 At least Akko has friends that are willing to support her and cheer her up. While Sucy did pull a silly prank on Akko it was relatively harmless and she does hang out with Akko and Lotte. It was nice though by Lotte to try and keep Akko’s spirits up and focus things on her card collection. That is a rather tough spot for Lotte, having roommates with pretty strange personalities. Akko is a bundle of energy and Sucy is a strange poison obsessed girl. Lotte just wanted a calm school year XD.

The one person though that might be able to share Akko’s unusual position at the school would be Ursula. Definitely some fair speculation you could make about her. She is a bit of an outcast within the teachers of that school. They somewhat treat her as someone who is less capable similarly to how the students are likely to end up treating Akko. It is interesting that she is reaching out to her though and intending to assist her. Akko definitely needs the help so that is a good thing. But Akko finding the Shiny Rod is likely related to all this. It would make a curious guess if Ursula has a relation to Chariot. It would explain why she’s shown so much interest. Hard to imagine a professional entertainer like Chariot ending up a clumsy teacher though. 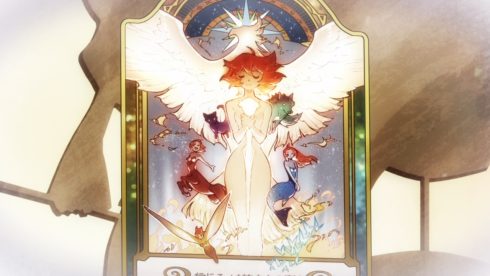 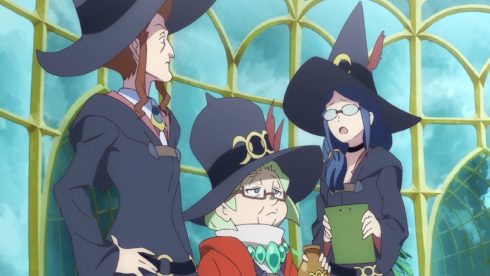 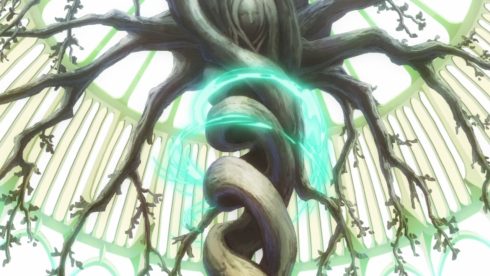 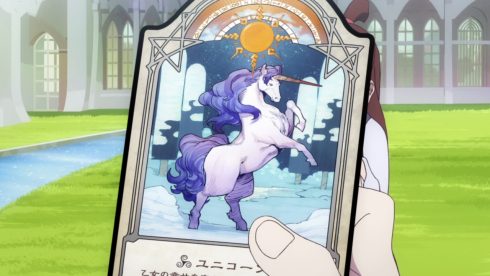 The big crisis was all about Diana, Akko, and the Memorial Tree. This was a good introduction to Diana’s character. She is the kind of elite student that would frustrate some people XD. She’s very capable, talented, and clearly has a long family history to keep in mind. Another point to make is that she’s very confident and decisive. These are normally fairly good qualities to have, but when that kind of person makes a mistake it can be disastrous. Diana made a decision most people wouldn’t in trying to treat the Memorial Tree by herself and then deal with its “affliction.” That would have resulted in her slaughtering those magic butterflies. I’m sure that fact is something that will really bother her for a good time. Probably isn’t much comfort either that she has received praise for something she didn’t really do.

What this episode did say is that those cards are going to be critical to events going forward. In a sense they might be a literal instruction manual for how to use Chariot’s Shiny Rod. Though some of them may only apply to certain situations. That also means we can guess a bit at various creatures the main cats will run into. Creatures the cast might see include unicorns, a magical mushroom, a dragon, etc. Looks like there were 12 cards, 11 of which Akko actually has. And they all have magical spells included in them. Chariot was rather careful about her card collection… 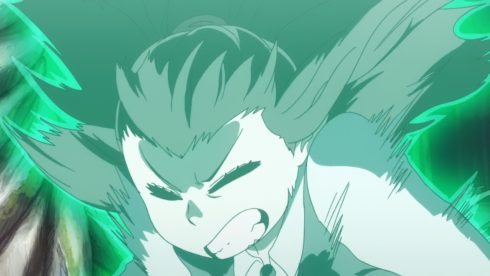 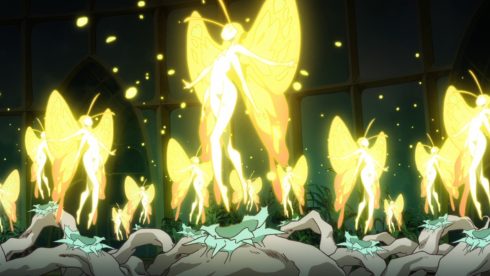 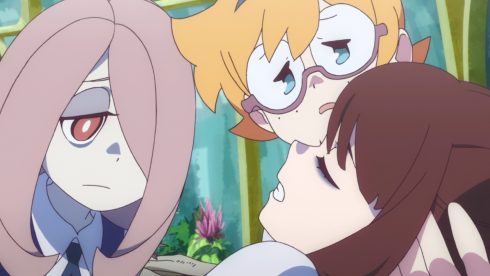 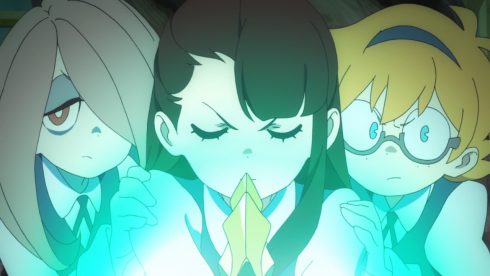 What I liked is how things managed to turn out. Akko had a rough moment when she couldn’t make the statue move, but showed her intelligence in a pinch. When she realized what those things might have been she didn’t hesitate to put her life on the line. It was fairly reckless of Diana to try something like that when Akko was clearly trying to protect them. But she was so confident in her own ability and judgment that she acted regardless of the warning. I’m curious to see how Diana patches things up with Akko and company. Far as the school is concerned Diana saved the day and Akko wasn’t involved. Kind of curious how long the story will keep Akko in the background and not give her credit. This has to be building to something.

Anyways this was another good episode for Little Witch Academia. I’m also not confirming on picking this up, but it is definitely on the radar. This episode gave us some insight into the magical society Akko is getting into and also just how deep her fandom for Chariot actually went. She is truly passionate and yet can be depressed when things don’t go well. I’m curious to see how Akko’s magical learning goes. So far we’ve seen her use magic with the Shiny Rod, but hopefully she can also do normal spells when taught what to do.