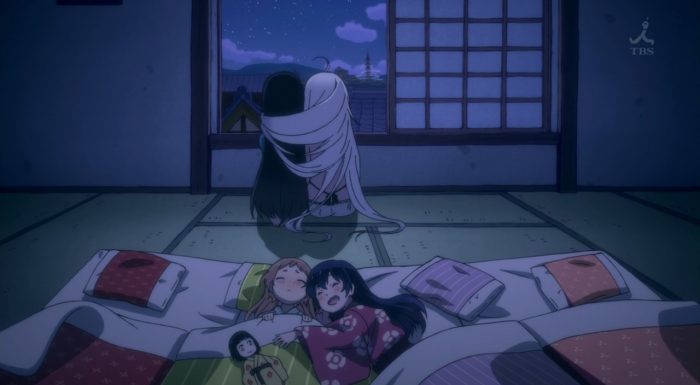 Yes indeed … episode two trickled out a lot of tidbits of information and also teased many, many more questions about Chiya and her story, while at the same time enlarging a bit more on the city of Meiro-chou in general. This is really shaping up to being a promising story, and one I find myself getting more and more interested in. So much so that I think I will settle on selecting this series as the one I will blog this season – there is a good mix of elements present that I enjoy, yes, (like the endearing characters and the fleshed out setting) but the story element and the visuals are also standing out quite nicely as a whole. Even more important, I find myself pondering about a lot of the side story elements that bubble up, seemingly in passing, from episode to episode and engaged to seek out answers and piece things together. Consider me happily surprised! Hopefully the series will be able to keep up the pace. 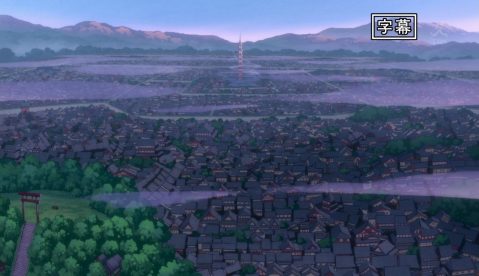 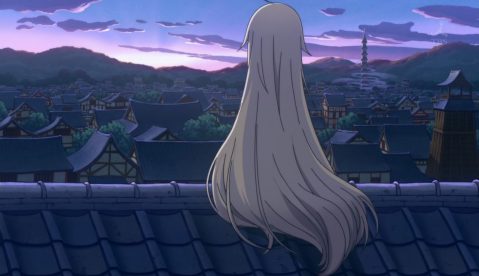 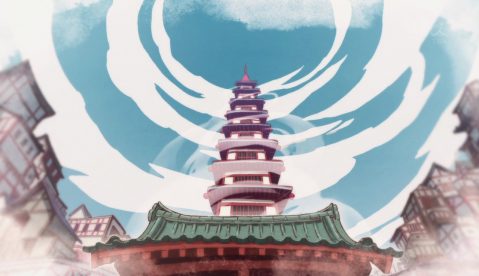 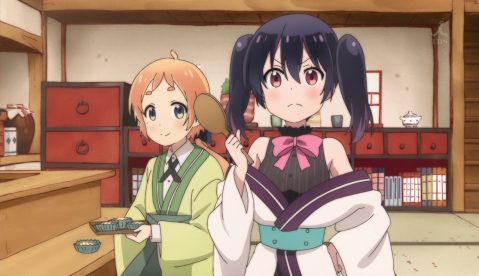 The episode opens up with a scene of Chiya sitting on a rooftop and looking over Meiro-chou at dawn (her hair is so LONG!) and the next thing we know it appears Chiya has returned and is being confronted by Koume and Nono for skipping out on breakfast duties … something Chiya seems to have forgotten. Looks like the apprentices take turns in sharing the various household duties at Natsume-ya? After a bit of wrangling and shenanigans Captain Saku arrives at the teahouse for some refreshments after her night time patrols only to bonk the playful Koume and Chiya on the head to calm them down. It seems Saku is a regular patron of the teahouse, but also is quite close to Nina and Nono. 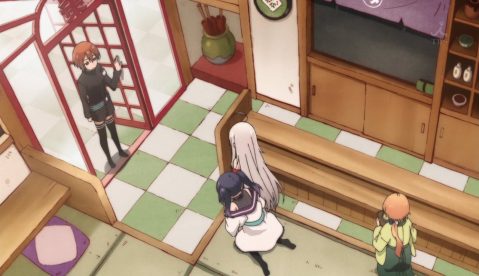 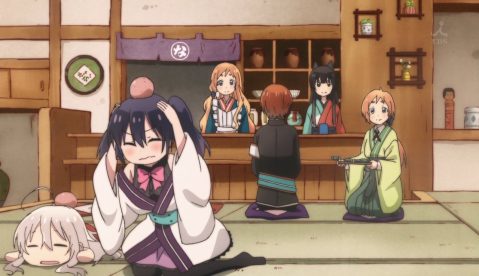 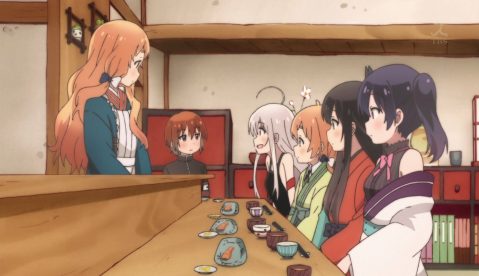 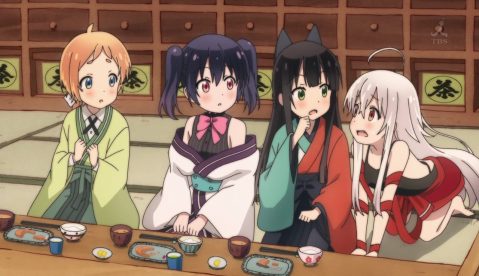 Now with the gang all gathered together Nono turns the discussion to the main theme of the episode – Chiya’s search for her mother. On asking Chiya where she went Chiya mentions to everyone that the very reason why she came to Meiro-chou to begin with was to find her mother. However, when pressed for details thereabout it soon becomes clear that Chiya has never met her, does not know her name, what she looks like, or where she is. In fact, the only thing she knows about her is the fact that Setsu (whom we discover to be a human from a flashback scene) was apparently asked to care for and raise Chiya until she was 15 and then was to send her to Meiro-chou with the letter of recommendation to Natsume-ya and the instruction to search for her mother. Not surprisingly there are LOTS of questions that arise from this sort of almost surreal setup. 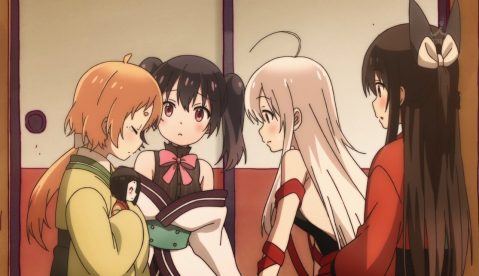 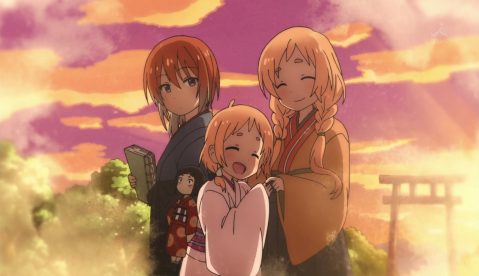 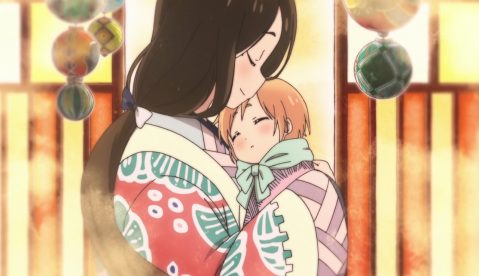 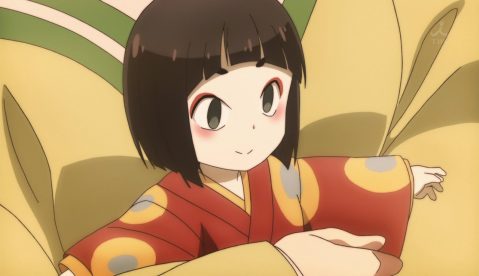 Unexpectedly Nono speaks up in a moment of firmness and encourages Chiya that there is absolutely nothing wrong with wanting to meet her mother (indeed, for Chiya it a very, very strong desire). It turns out Nono herself lost her mother at a very young age … and in fact the very doll she treasures was a gift from her mother while she was still alive. While encouraging Chiya in her desire to search for her mother as natural, even Nono admits that the entire setup Chiya finds herself in is quite unusual. Setsu apparently knows nothing about Chiya’s mother (or is not telling … perhaps by choice, perhaps by direct order, perhaps by alteration of her memory via magic, etc., etc.), and the mere fact that a mother would put her child in such a situation seems … extremely suspicious. It seems obvious to me that there is a whole lot more going on here than meets the eye, and it seems Chiya’s fellow apprentices are thinking similar things. 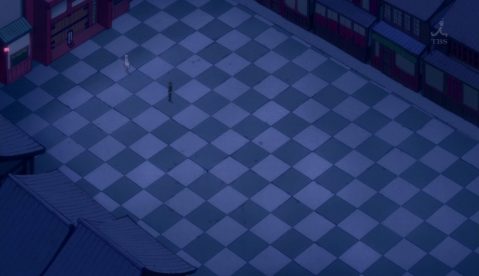 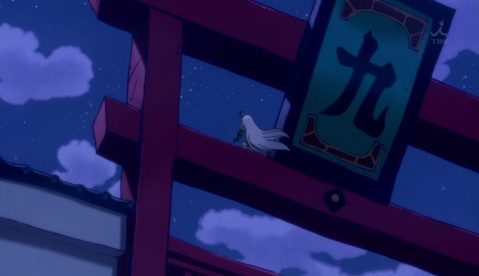 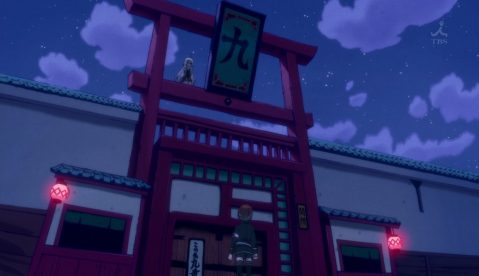 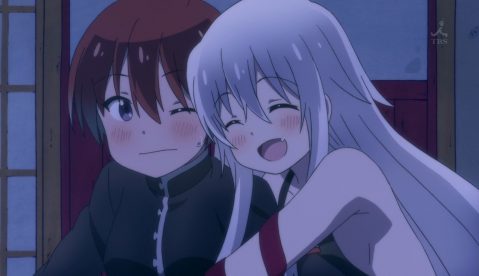 On hearing that a divination (a logical course of action in a city such as Meiro-chou) for who her mother is with NO information whatsoever would probably only be possible for THE Urara – the highest of the city seers who services are incredibly expensive and is even said to communicate with the gods of the city themselves (beings who very few people know anything about and are apparently discouraged from even trying to discover things, interestingly), Chiya decides to head directly for section one of the city where the head Urara is to be found. Her attempt to illegally cross over into section one is anticipated and stopped by Captain Saku, who, while carrying out her duties still obviously is a kind soul and encourages Chiya to go through the proper channels and work her way up the “ladder” to meet and speak with the head Urara herself. Her kindness and support effectively wins Chiya over, and the latter seems completely comfortable with Saku from that point on and seems to frequently and openly shows her love for her gentle disposition. 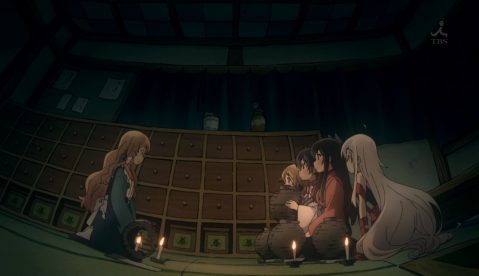 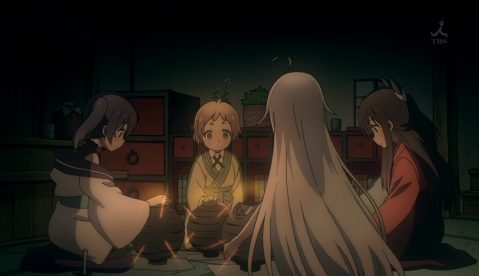 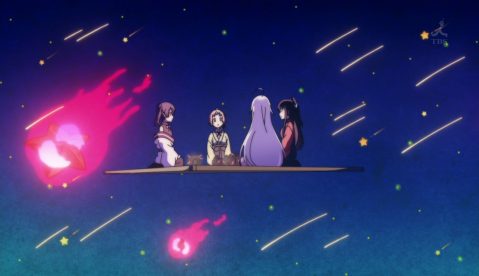 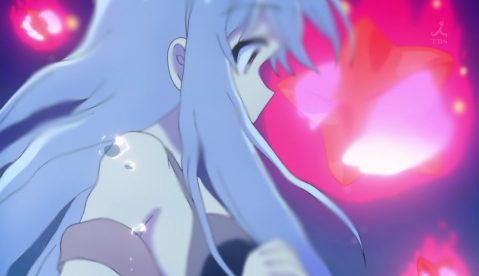 Having resolved to search out her mother through the “proper channels” (which many viewers have commented that they suspect was probably the intended result of the instructions Chiya’s mother left behind to begin with) Chiya throws herself into training. In the first practical exercise of divination (known as shooting star divination) all the apprentices experience a brief moment of being aware that there were powers at work around them, but Chiya suddenly finds herself immersed even deeper in the realm of the “other” and hearing a voice calling out her name. She is surprised but does not really have a context to process the experience in … I would not be surprised if some reticence also arose from the fact that Nina warned them that seeking out contact or information about the gods of the city themselves (the source of the knowledge imparted to those dwelling in “their city”) then an Urara would find her powers stripped from them. Nevertheless, Kon picks up on something, and begins to suspect Chiya may have experienced something different than she and the others did. 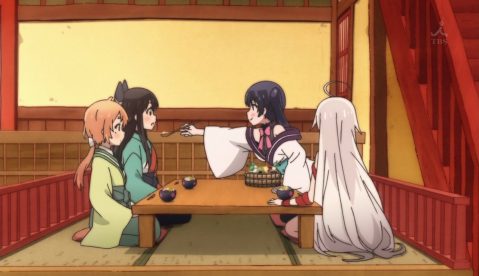 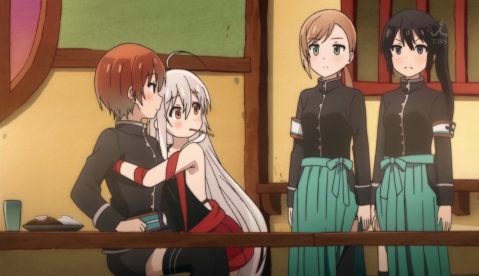 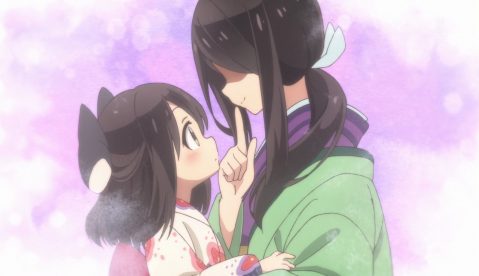 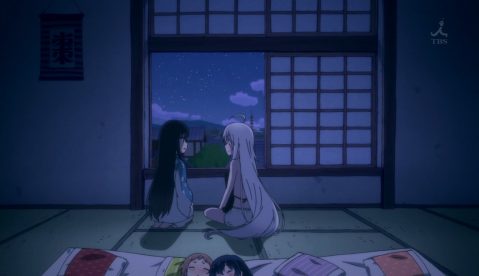 It turns out that when Kon was a child she asked her mother (whose VA was the perfect choice in Mamiko Noto!) about the gods, and her mother strictly warned her not to look into them too closely. But she DID say that the gods will sometimes speak to or even interact with those whom they have set aside, or chosen. Later that evening when Chiya and Kon are looking at the stars together Kon pops the question, and Chiya replies that she did in fact hear something. This both confirms for the audience that Chiya is indeed a special person likely set aside for direct contact with the gods of the city, and also sheds some light on … well lots of things. If there are gods either directly involved in Chiya’s life or else directly involved through her mother or through the head Urara (who could be one and the same for all we know), then many things, including even Chiya’s absurd physical abilities, would fall into place. It could also shed some light on who the rabbit black kimono wearing figure is who has popped up a few times before now in the OP sequences. 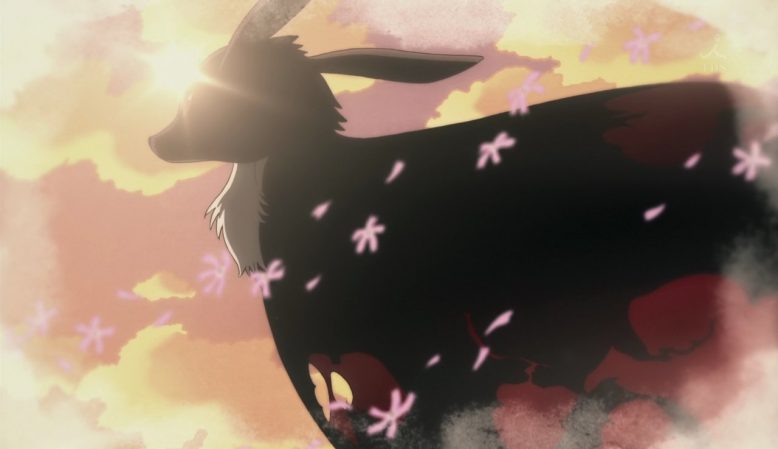 This … whatever it is … is shown as a shadow with red eyes behind Chiya in the OP. A god of the city?

Needless to say I am rather curious to see how this story will play itself out and watch as the characters grow and begin to fully step into their own as people and as Urara. Perhaps in the process we will learn more about … well … everything! And I can honestly say that at the moment I do find myself interested in LOTS of things that the series is doing. Looking forward to you all joining me as we walk alongside everyone and the story develops! See you all next week!