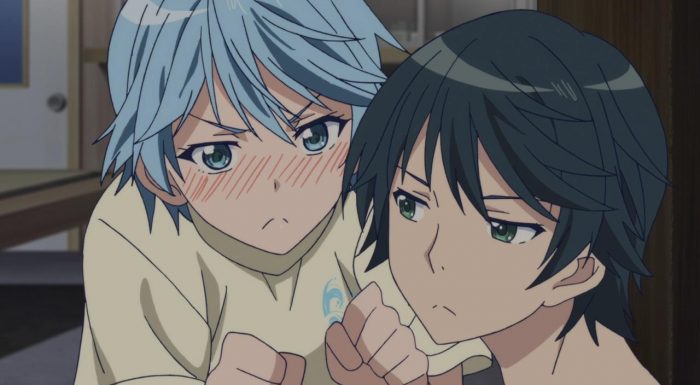 Well… That happened way quicker than I thought it would. The experience of watching Fuuka is like getting on a roller coaster. The thrill is cheap, there’s ups and there’s downs, and it all kind of feels both exciting and weird while you’re on the ride. And its once you’re off the ride that things feel a lot more murky. Fuuka’s third episode is definitely murkier, even if it is just more of what we saw in episodes 1 and 2, again, for better or worse. 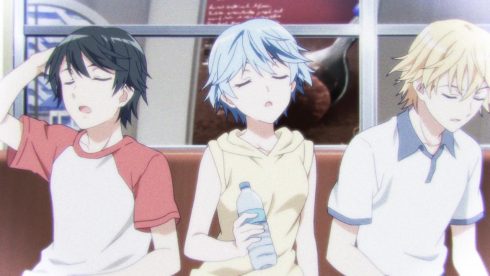 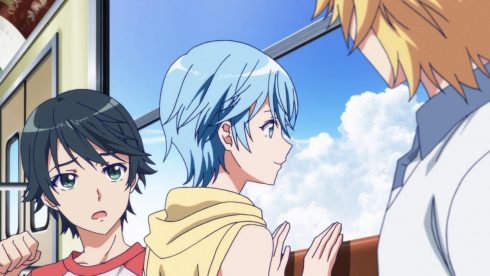 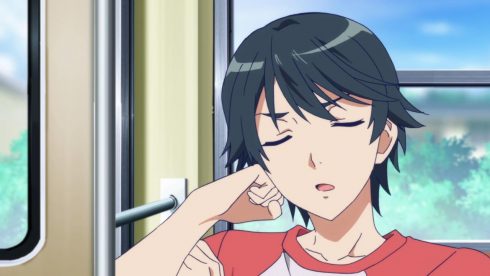 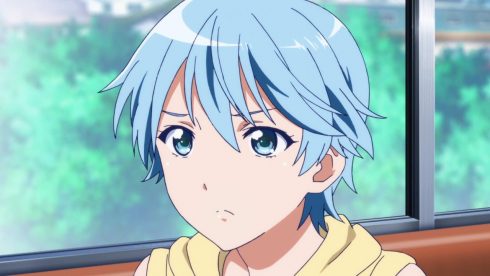 The big problem, that I see this series having at the moment, is that Fuuka (the character) is becoming an idealized version of a female, rather than an actual girl. She’s transformed from a girl that had personality and some weird quirks, to the ultimate dream girl, from what I imagine would be the perspective of an immature teenager. Plus… Here’s the thing, this episode and Fuuka herself dish out so many romantic cliches and “dream girl is cute” moments, that its hard to keep a straight face while watching it all play out.

The show almost dives deep into straight up male fantasy territory at some points this week. The reasons that Fuuka likes Yuu are the most “noble” you’d ever imagine. She’s glad that he’s trying his best, even if he doesn’t always succeed or do whatever it is he’s doing well. The encouragement, the friendliness and the rather cute way in which she ends up getting close to him, is so… fake looking. Its fake because it doesn’t feel like Yuu’s done anything beyond a few odd fumbled attempts at “protecting her” to earn it. Its here, I think, that the show just really ends up asking for waaay too much in terms of suspension of disbelief. I just don’t buy that Fuuka would be interested in Yuu, and that’s a problem when the story’s primary couple doesn’t feel real or organic enough. 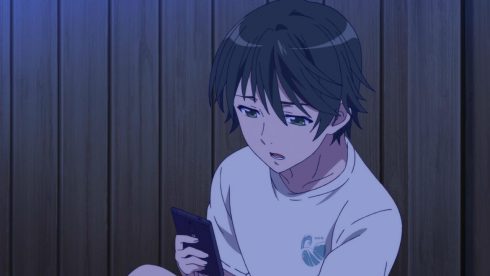 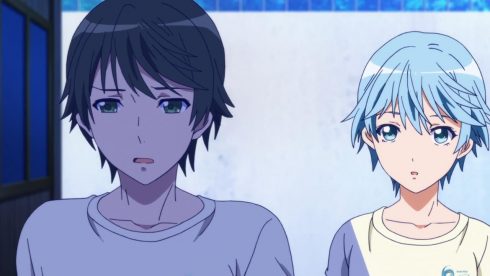 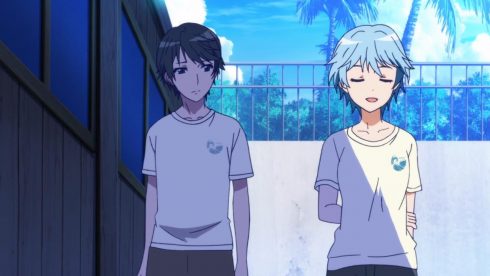 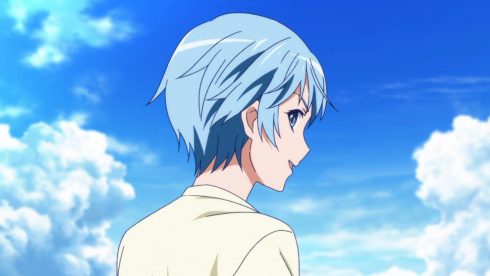 There is no rhyme or reason that a guy like Yuu would ever get the affections and intense attention of a girl like Fuuka. What’s worse of course, is that Fuuka has made a complete 180 degree turn in terms of her personality. There’s none of that rashness, or even some of the flat out annoying characteristics that grounded Fuuka as a person. Plus, there’s no real barriers or challenges for Yuu or Fuuka to connect this episode. There’s none of that awkward charm that we saw on their first date, or the mismatched personalities clashing or anything that you’d call interesting happening here. Its just a simple Fuuka + Yuu = two kids interested in one another.

The mood is great, the situation is ideal, there’s even multiple moments where Yuu gets to “shine”, and he ends up drowning just so Fuuka can “resuscitate” him via kiss. I’m all for forward momentum and quick progression for couples, because more often than not romance in anime generally is too slow. But here? Here the so called connection and romantic tension that seems to be developing between Yuu and Fuuka just feels unearned, because everything just feels so darn conveniently arranged for them, to the point where Fuuka’s entire character seems ruined for the plot to work here. 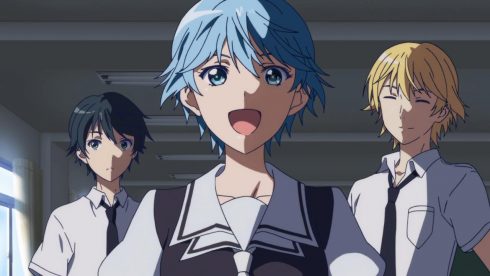 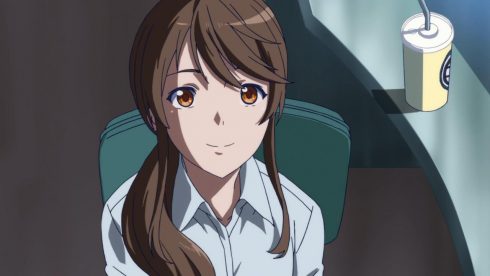 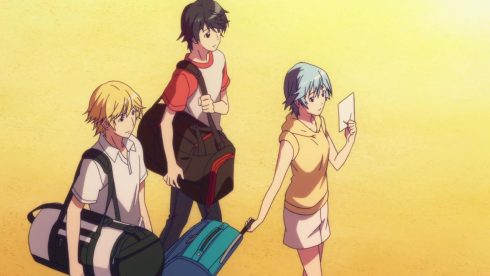 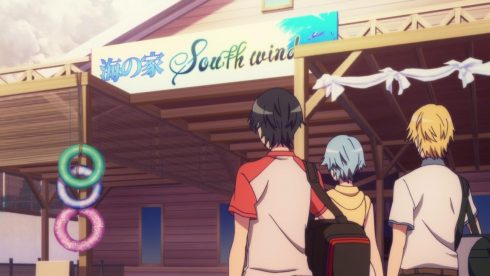 So how exactly did we get to all of that? Well, I suppose I should talk about the events of the episode itself. This week’s episode is set a few weeks after Fuuka’s big declaration of wanting to start her band with Yuu and Makoto. Since Fuuka and the other two don’t have any money for instruments, they end up taking a live in part-time job over the summer, at a beach house. Stop me if you’ve heard or seen that situation before, because the whole beach house story plays about exactly how you’d expect.

Fuuka and Makoto are great at their job of serving customers, while Yuu struggles at first, but with Fuuka’s encouragement, ends up powering through. Once that’s done, the two share a moment on the beach, with Fuuka almost drowning, and then Yuu himself drowning in the process of trying to save her. Which leads to the “mouth to mouth”, which leads to both characters feeling awkward, when there’s clearly some romantic connection in the air. 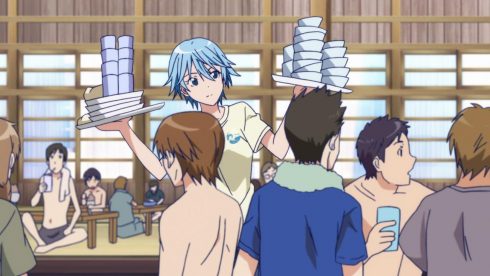 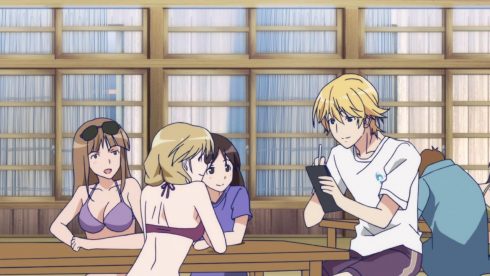 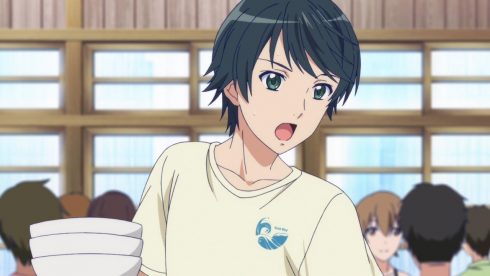 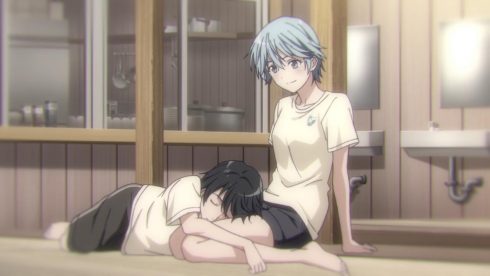 Its all so by the numbers, and it all happens so fast in the episode, that it just ends up losing impact. Yuu’s whole “does she like? Does she not like me?” thing borders on annoying, because of the fact, that its so darn obvious to everyone, even cheesy line spouting Makoto, that Fuuka is so into him.

And I get it, the show has positioned Yuu as an awkward guy who can’t handle social situations. I know that, because Yuu himself mentions his twitter and recedes into a corner with his phone, when things get tough. Of course, the fact that a pretty girl’s encouragement is enough to make him basically change himself, and power through something as difficult as a service job, is an insult to people who actually struggle with that whole thing. Its not easy to overcome shyness, and it takes multiple attempts and a lot of pain, before one even does. Even wanting to be better isn’t enough sometimes, and the show positioning Fuuka’s one minute chat as a “motivation to change” doesn’t read all that great, at least to me. 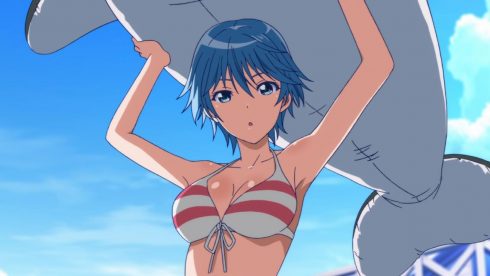 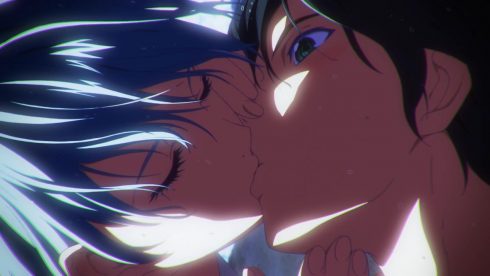 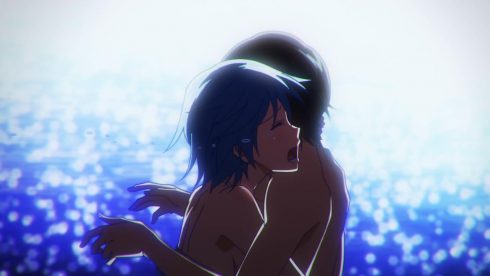 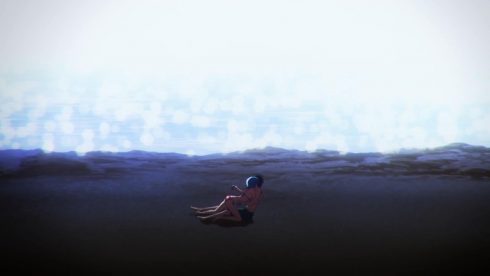 Its little things like that, that cheapen the impact of all the progress that this episode makes, and makes the big cliffhanger at the end seem surprising and nothing else. Which brings us to the next big “character is adjusted for plot” moment. See, Yuu, as awkward as he is, ends up just laying down lines like “You’ve really gotten pretty” to the other girl in this story, Koyuki, a few minutes after he’s so confused and awkward with Fuuka.

Remember Koyuki? She’s the idol that is Yuu’s childhood friend, and as such is just into him. She doesn’t know him, but she’s just interested in him. Koyuki’s attachment and whole “lets meet at dark under the beautiful rain” moment is a lot more believable, but Yuu’s sudden interest in her is not. Its hard to really nail down whether Yuu actually likes Koyuki, or if he’s the dumb idiot that can’t get a clue and is just trying to connect with an old childhood friend. 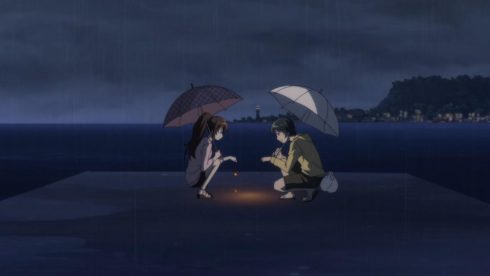 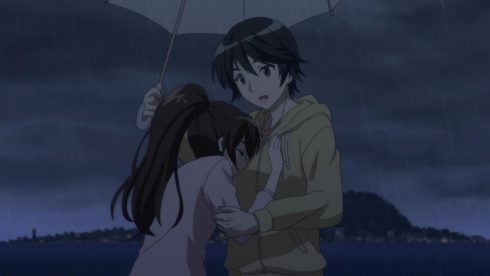 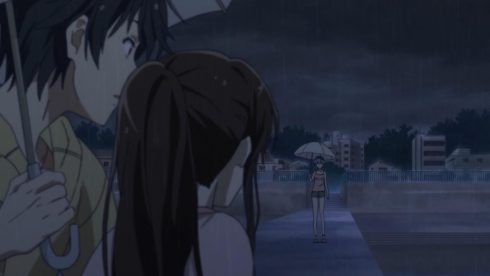 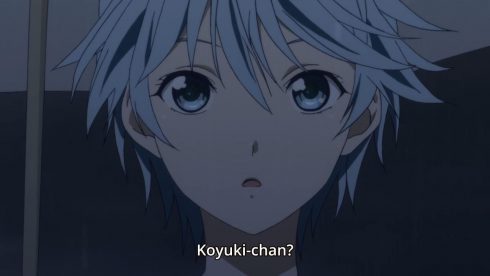 To make matters worse, its while those annoying questions are still very much up in the air, the air literally creates a strong gust and gives Koyuki and Yuu their big “hug” moment. And of course, Fuuka ends up “catching them” in the act, and while Yuu didn’t intend it, this will hurt and sadden Fuuka herself (and cause tons of drama?). Oh and there’s also the issue of the fact that Fuuka also seems to know Koyuki, which, uhhh throws another wrinkle into this pretty standard love triangle.

It may sound like I’m being harsh on Fuuka, and I am, but I really don’t think that this show is absolutely terrible despite that. Sure the plot doesn’t seem to have anything wholly original or any kind of real depth, plus there’s the odd fanservicey stuff thrown here and there, but the show still manages to be watchable, and keeps me curious for what’s coming down the line. These sorts of problems that I’ve talked about at length in this post, are something that feel more noticeable on reflection and introspection. I don’t think that these are are immediately apparent, while you’re watching the episode for the first time (not that I’d rewatch it). The worrying thing is that Fuuka as a show, is just doing everything by the numbers so far, and in three episodes, we’ve gotten to a point, rather artificially, where the main trio is squarely coming to a head with their so called love triangle. 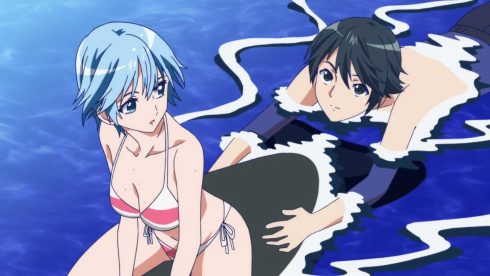 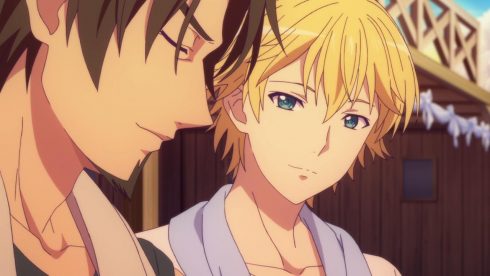 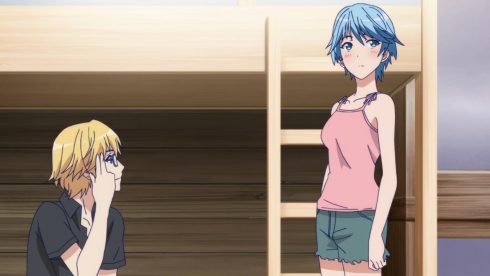 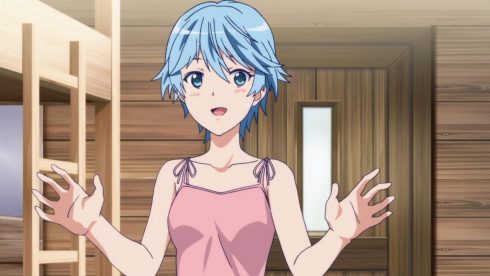 Part of me thinks that Fuuka (the show), is going to do something else, and pivot somewhere, because this all seems to quick and careless to really be the crux of the story. I don’t think the love triangle is going to be all we get from this show. The question then, is what exactly is this show’s big ace in the hole? I suppose that, is what will make or break this series, and maybe elevate it from being just mediocre and forgettable.

Makoto’s Line of The week: 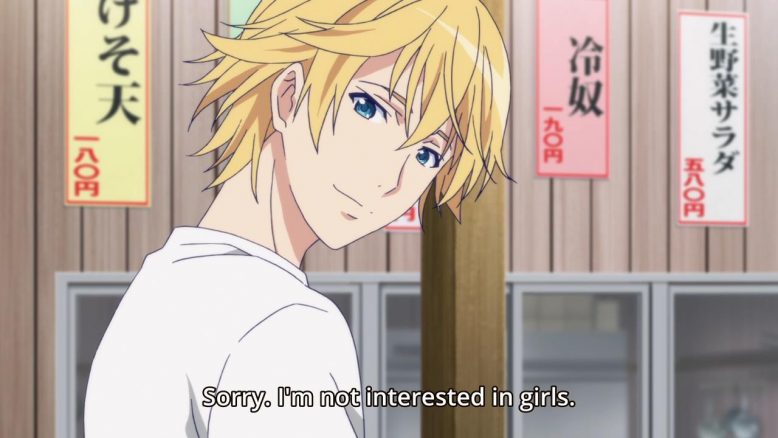 I’ve mentioned before that Makoto is such an odd character. I still haven’t really talked about him at Length, but I’m going to start including his best (worst) line every episode. Lets see how many of these we get every week… See ya all next week!