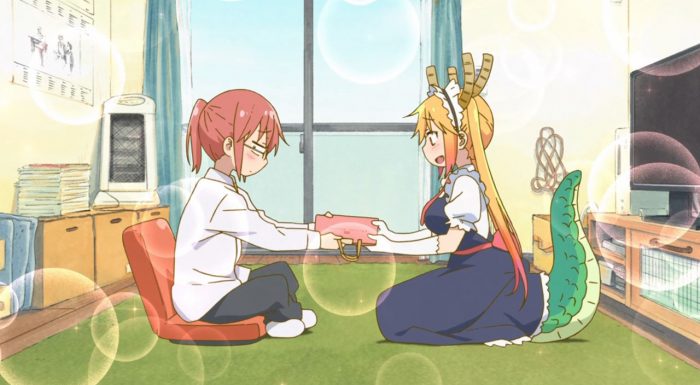 Now here we have an anime adaptation based on a source manga that I have followed for some time from a mangaka who has written a fair number of series. But of all of them I think this is the one that I consistently find to be the most effective at humor. The mangaka, named “Cool Kyoushinsha”, has penned a few other manga that have also been adapted into anime form, though mostly in the form of short anime; they include Danna ga Nani o Itte Iru ka Wakaranai Ken and Komori-san wa Kotowarenai! This is the first time one of his series has been adopted into a full length anime. (Hopefully his manga Ojojojo will be able to be adapted some day.) But whatever else may be said, his stories are first and foremost 4koma comedies with fanservice. It is not highbrow art by any means whatsoever, and one should not go into them expecting profound revelations of psychological or political insight or the like! That being said, this series DOES have a bit more story and background to it than one might expect from a 4koma work (at least in the manga source), and there are occasional moments of empathy and even … insight … that take one by surprise. 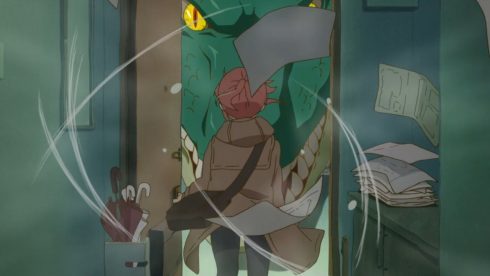 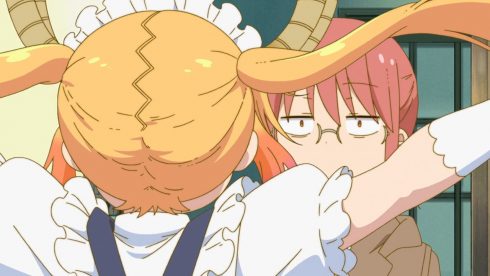 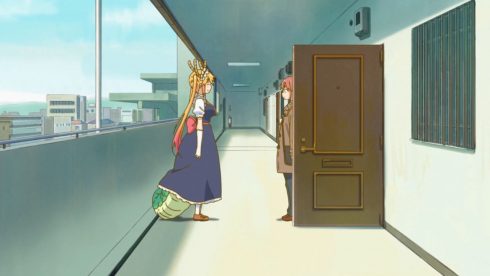 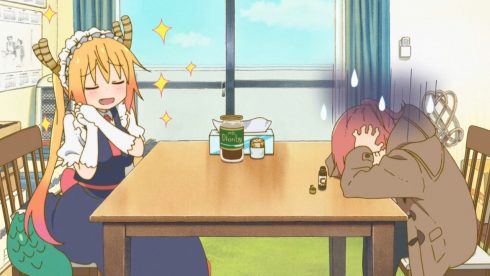 Before we get ahead of ourselves, though, here is a basic summary of the premise of the series: “Long, long ago (sometime last week) in a faraway land (in the mountains outside Tokyo), a mighty dragon fell in love with a beautiful princess (a drunk and disgruntled careerwoman). Ever since that day, the carefree dragon Tohru has dreamed of reuniting with her lady love, Kobayashi-san, but it seemed like there may be no place for a ten-ton scaly beast in the city. So Tohru finally decided to become a maid, offering to clean and guard Kobayashi-san’s apartment in exchange for the honor of living by her side and sharing her bed. (Although Kobayashi isn’t interested in sharing things in a sexual sense.) Can Tohru fulfill her duties as a maid without burning the apartment to the ground?“ 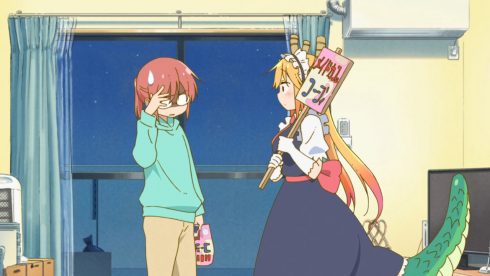 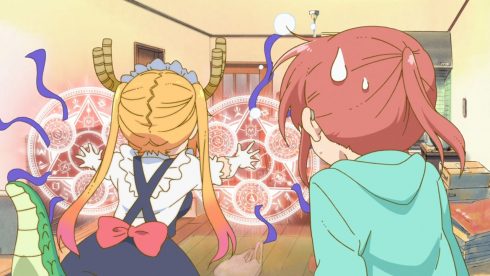 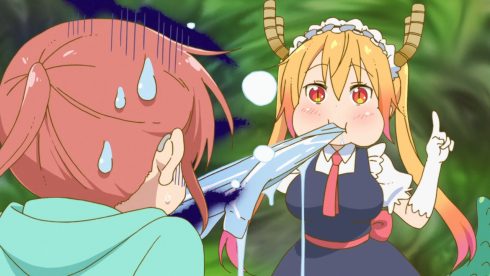 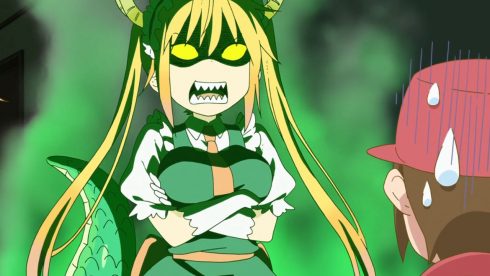 Before the series’ first episode aired there were a few things that concerned me. First and foremost was whether or no KyoAni studio would treat the source material with respect or would create something largely their own creature. On this regard I am happy to say that the first episode did indeed seem to have that level of respect. I was pleasantly surprised by that. The second worry I had (and which I am still not entirely sold on) is whether or no the series (and perhaps the medium?) will be able to effectively re-create that “something” that makes the manga work so well comedically for me. The reason I mention medium is because (though this is just my own opinion here) some of the effectiveness of the humor stems from his drawing style. A drawing style very, very different from what KyoAni is adopting here. The jury is still out overall for me on this one, but I felt the first episode was a decent beginning, at least. 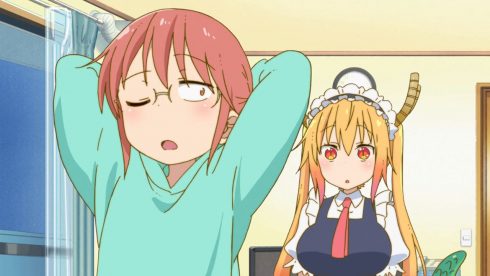 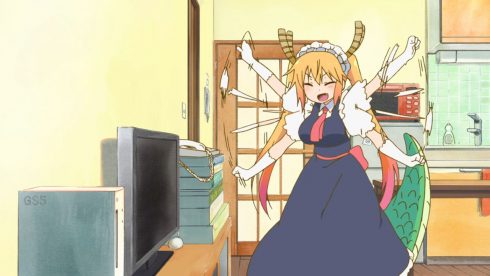 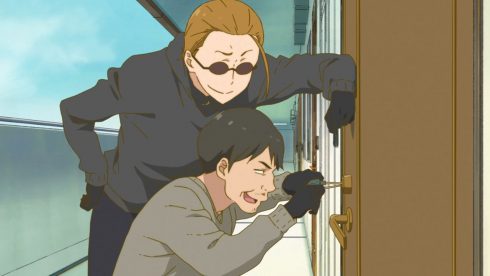 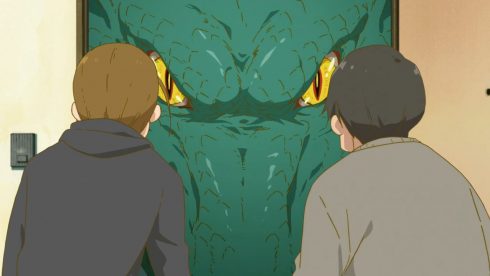 The humor throughout many of the mangaka’s series remains of a fairly consistent sort. Many of his series are 4koma (and many are packed with ecchi content as well), and they reflect that kind of humor in general, but what makes the mangaka’s humor so characteristic is his use of … erm … scenes and/or “subdued one-liners” said in passing by someone and at a time one would completely not expect. In the source manga for this series this is very effective and the ones usually involved in or delivering these non sequitur situations/one-liners are usually dragons who don’t quite “get” modern urban society and are approaching it from … well … the perspective of one of a fantasy world’s most dangerous and terrifying potential foes. Those times when the dragons are interacting with one another not as dragons transformed to humans but rather as dragons to dragons (and humans just happen to be around) is another vein to mine in this respect, and I am looking forward to what the studio will do with this content as well. 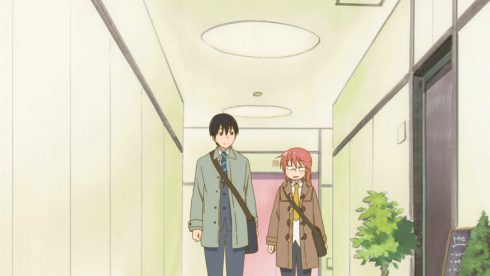 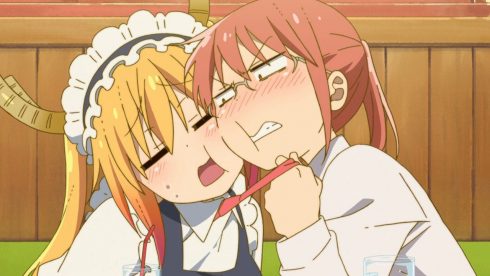 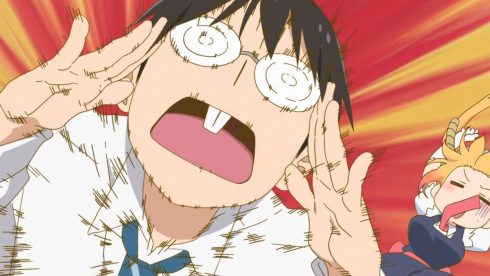 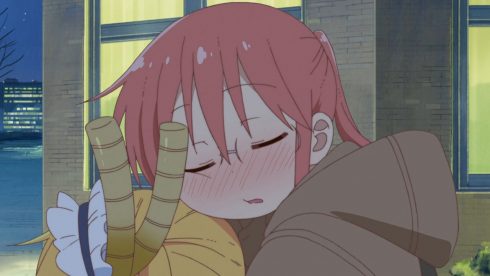 In terms of production values the first episode seemed to be a little below normal for KyoAni animation standards (which means pretty darn good compared to other studios XD ). We only saw the OP this week (and it was at the end of the episode), but it is not unpleasant, and the OST and such seem to be okay as far as that goes – not standing out to the negative or as remarkable. The voice acting … I am still rather unsure on this front. Everyone seems okay thus far, but I think that the voice acting will take some time for them all to grow on me. On the whole, though, I think that the latter will be a general reference point for me to the entire series overall. I thought the first episode was not bad as far as adaptations go – but for myself it still feels too “new”, I guess. Even so, I am willing to give it a chance for now. Whether or no one should give the series a try is a tricky thing to recommend. Perhaps if you liked last years Monster Musume you might enjoy this series. Or if you enjoyed the humor from the other works of the mangaka that have received adaptations as well. But if you are okay with the ecchi content then you may indeed enjoy the series if given a chance. 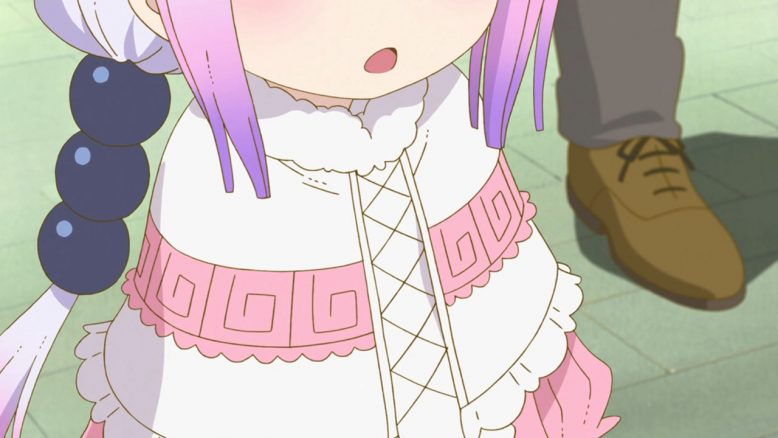 My fave among the dragons is arriving next episode … Kanna!

in Kobayashi-san Chi no Maid Dragon