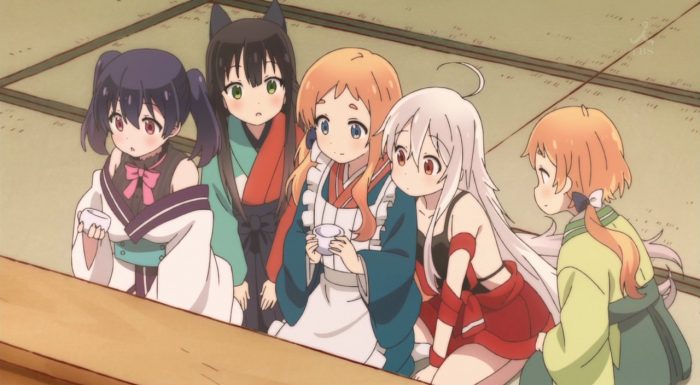 This is one of those series that the pv’s and any information trickled out about it before it aired were very sparse. Just about all one knew was that it was an anime adaptation of a series that was serialized in one of the Kirara variant mangas, which admittedly is fine enough for me to at least give it a look. But as time went on I began to see that the manga it was running in was one of the more “outside the box” Kirara variants – one that, for example, produced such series as Joukamachi no Dandelion and Koufuku Graffiti, which basically means sticking to the 4koma format much of the time but having a bit more serious and clear background story and plot progression. And that surprised me, for everything I had seen before that didn’t seem to hint at anything like more serious content or story development at all. Well, after watching the first episode I can definitely say I am quite surprised – the setting and story of the series is quite detailed and quite pronounced! 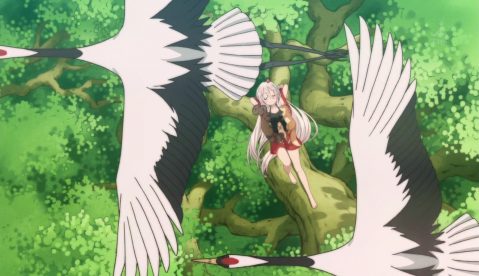 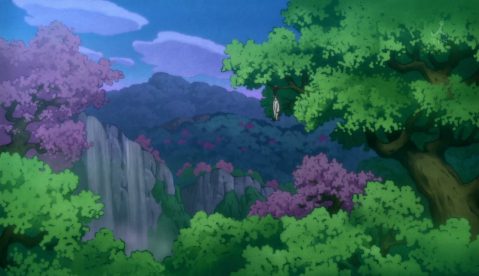 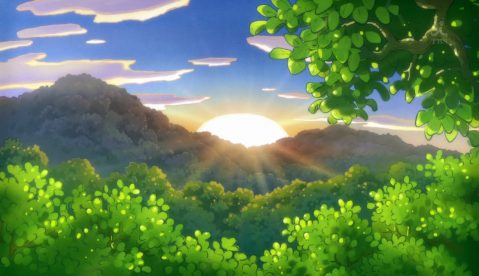 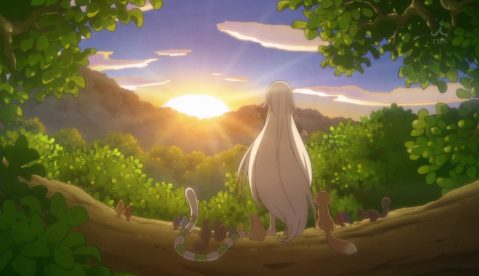 For those curious here is a summary of the series: “High in the mountains, far from human civilization, there lies the magical city of Meiro-chou, a haven for legendary artisans of many stripes, but especially the “Urara,” powerful fortune tellers who can divine your future with their own unique talents. Once they reach age 15, girls from all over the world can take up apprenticeships in Meiro-chou to cultivate their own fortune-telling style, whether they’re from a small town, a foreign country, or even if they were raised by animals in the woods! Chiya doesn’t know much of anything about how to behave in human society (even rolling over and showing her belly to apologize instead of bowing her head), but she’s hoping to find her long-lost mother and her own place as an Urara in Meiro-chou, alongside three other girls who have already found their talents in kokkuri, tarot, and ningyo-style fortune telling. But no matter how their studies go, at least they’ve already made fast friends!“ 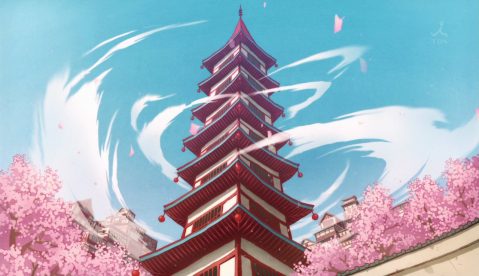 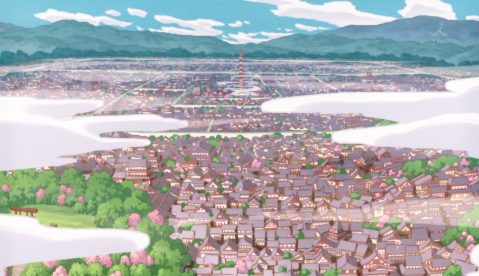 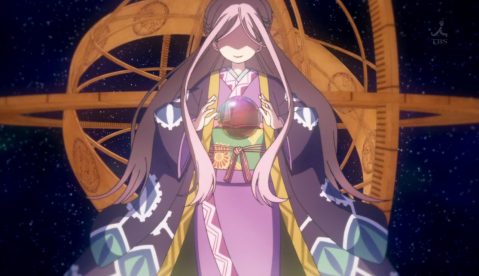 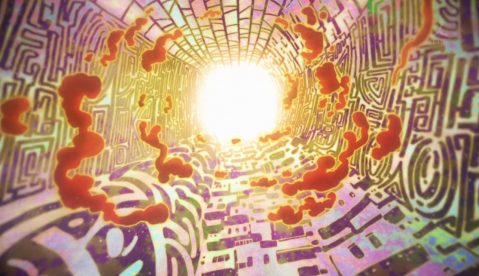 So first and foremost the setting … it is extremely detailed. The city of the fortune tellers (“labyrinth town” or Meiro-chou) is divided into ten separate sections, and when a specific fortune teller “levels up” in some way (through things like accomplishing specific tasks given them by the one who takes them on as apprentices or improving the accuracy of the particular technique they choose for divination through practice) they are somehow granted access to another section. And I would not be surprised if there are both civic ways in place to keep people in their proper section as well as magic preventatives. Apprentices can start out at age 15 at the earliest and are assigned to an instructor in the lowest section (#10) and the highest section is number one. Fortune tellers are named “urara”, but there is also “THE Urara”, who stands at the top of all other diviners in the city (I think it is assumed that the Urara lives in section #1). It is not uncommon for apprentices to have dreams and ambitions to be the next Urara. 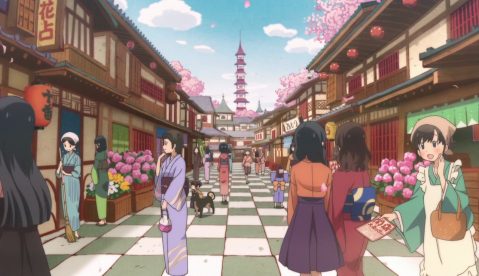 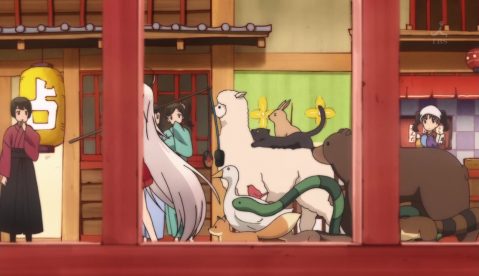 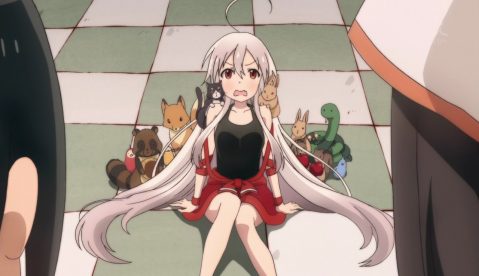 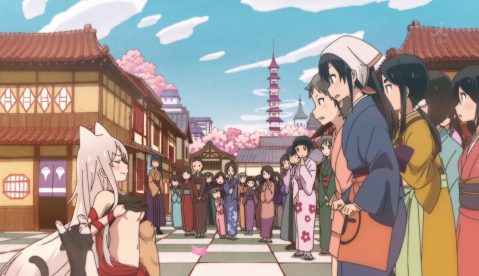 The story’s main character is named Chiya. We have only seen one episode of her thus far, but suffice it to say that she is already a pretty mysterious person. Apparently she was raised in the wilderness by animals (as well of something or someone named “Setsu”, it seems), and wild animals of all sorts absolutely adore her. She has become so used to it that she speaks with them as she would any person, and she has also become used to the fact that animals following her wherever she goes is just “understood”. Interestingly, her physical abilities and aptitudes are beyond normal for a human being as well, including strength, stamina, agility and the rest, though it appears she is able to read, interestingly. But one thing is absolutely clear – and that is that she is really unused to both other people and human societal norms as well and has instead adopted a few norms from animals. For example, her ways of apologizing to others is not the standard Japanese degrees of one bowing one’s head, rather they are very similar to that of wolves – by making herself vulnerable to them by baring her stomach to them or lying on her back in a submissive position in addition to the former. 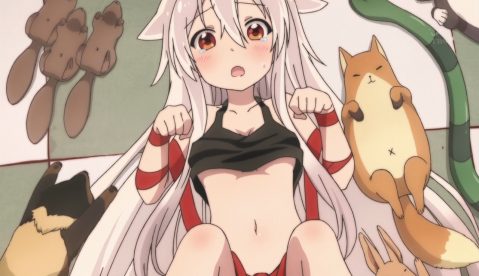 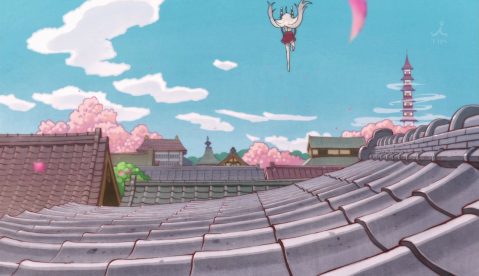 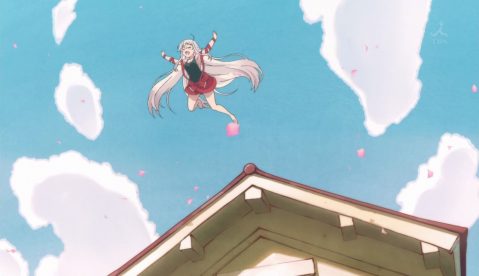 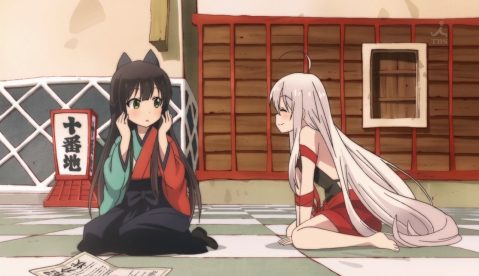 The reason why Chiya has left her mountain wilderness home and come to Meiro-chou at Setsu’s advice (with a letter of recommendation to apprentice herself to a tea-house named “Natsume-ya”) is in order to find her mother, who is apparently an urara in the city somewhere. Interestingly, though, when Chiya left home she knew nothing about urara in general, or even that coming to the town with said letter of apprenticeship presupposes her becoming an urara herself – if you ask me her physical abilities and closeness to animals are already pretty “mystical” to begin with. When arriving in the city (animal entourage and all) she gets involved in some unexpected miscommunications due to her complete unfamiliarity with human society, and upon escaping the chaos runs providentially into two other apprentice hopefuls (named Kon and Koume) who just happen to have letters of recommendation to the same tea shop, whose proprietress is named Nina and who specializes in “tea-leaf fortune telling”. At the tea shop proper they meet the final member of the apprentices, Nina’s younger sister Nono. After everyone introduces oneself to each other the apprentice are given their official “Meiro-chou section #10” document, and the story begins! 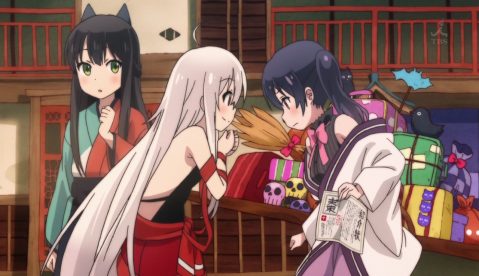 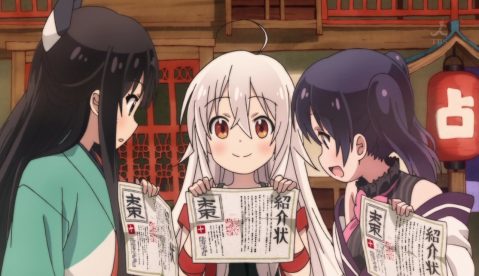 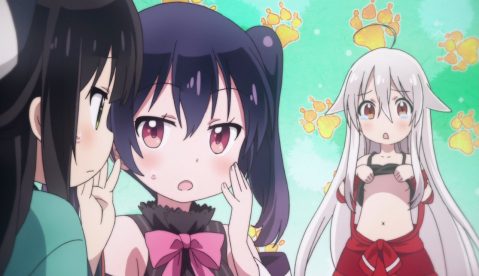 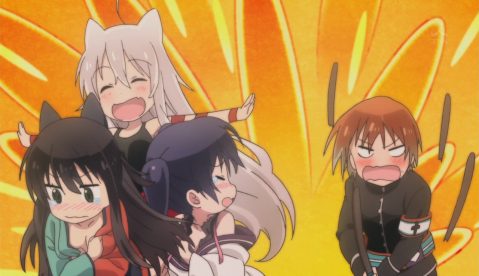 Regarding the anime itself … for those who know what it means, it is abundantly obvious that this is a Kirara series. XD In other words, this is an all-girl cast with a focus on lots of comedic situations interspersed with the story as a whole. As mentioned earlier, the detail of the setting and the clear overarching story present is nice to see – this is not a happy-go-lucky aimless wandering from here to there day in and day out (which is fine for me too, incidentally – just emphasizing the differences), but even so the characters are almost all smiles and sunshine. There was an unexpected angle of fanservice, however – and a curious sort, intermixed with Chiya’s “feral” habits. I could easily see some feeling the “baring one’s stomach” joke was dragged out a little too long (although Chiya was frikkin’ adorable when she did that – it was clear she is a dear and was genuinely sorry for hurting or offending others unintentionally). Another unexpected element is the degree of how the fortune telling element is treated seriously. The sequences showing the attempts of the shop owner Nina and Kon to get insight into Chiya herself were surprisingly “eerily numinous”, I guess (also the doll speaking telepathically to Nono was successfully creepy). 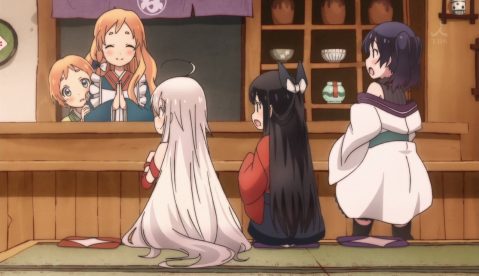 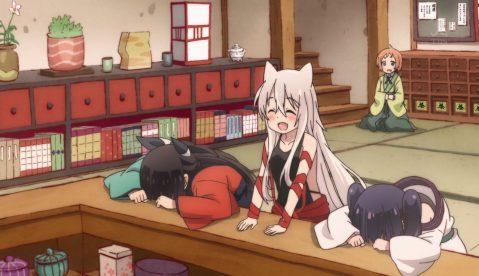 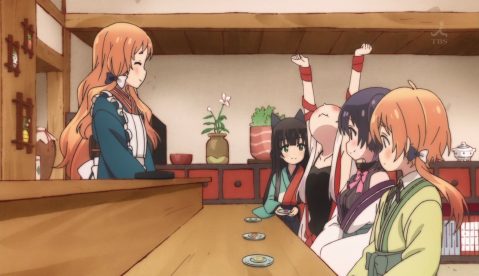 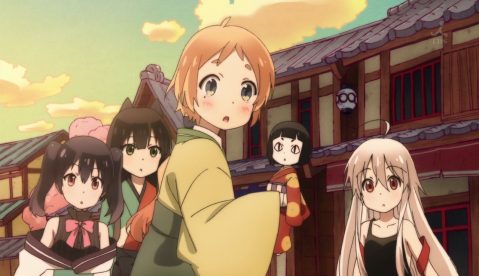 On the whole I found myself enjoying the first episode, and happily surprised at how much potential the story seems to have. The characters, the setting, the humor (at least most of the time) and especially the story all seem engaging and interesting to me – while making the qualification that I am one of those who is very predisposed to liking Kirara series in general, of course; such things are not to everyone’s taste. The OP and the ED were kinda fitting, but neither was anything special for me, while the art style (J.C. Staff once again) was plenty fine on the whole. All of these things bundled together make for a successful series for me! As for blogging it though … umm … to be honest at this moment I am not sure. I would have to see a few more episodes (and a few other series) before deciding. 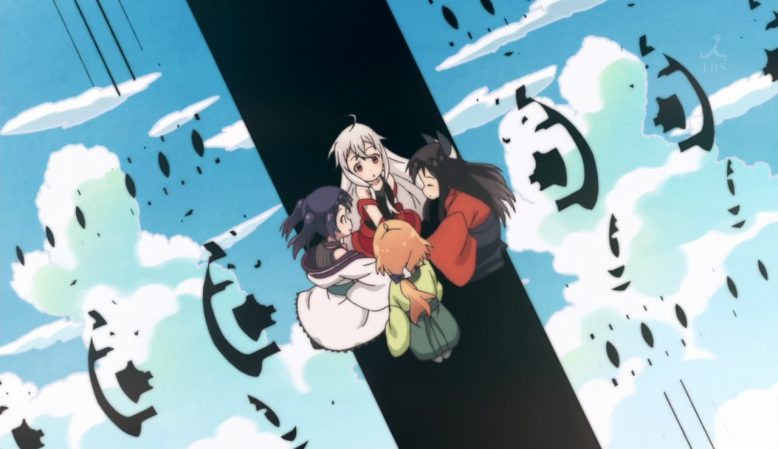 Unlocking the gates to the dead to glean information via a fox spirit … creepy!