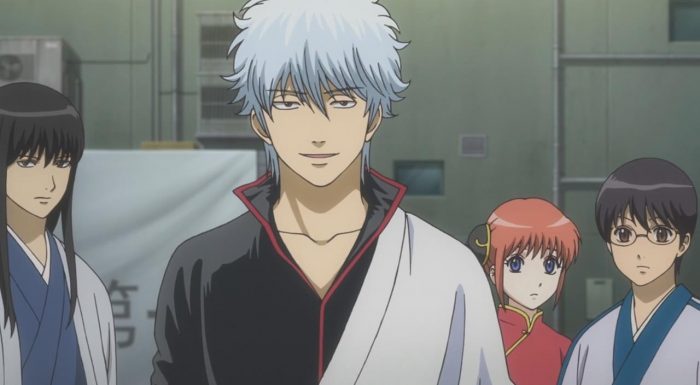 Its 2017 and we have yet another return for the Gintama franchise in anime form. While the return for one of the funniest shounen anime in the anime landscape is welcome, there’s a few changes this time around. The series is actually airing in the late night anime time-slot now. Its perhaps because of that, or just because of where we’re at in the story, that the show seems to be a lot less carefree this time around. Gintama is back, and it honestly feels like it never left in some ways, but in some ways, it feels like its changed. We’re picking up exactly where we left off at the end of the last season. 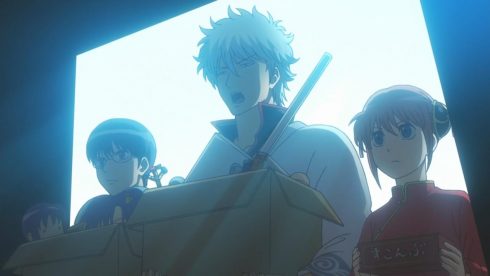 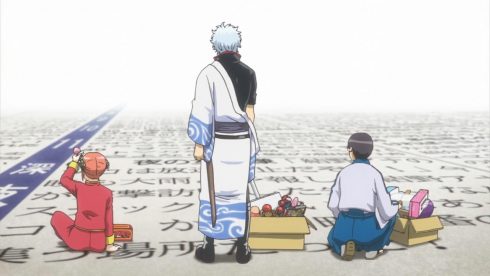 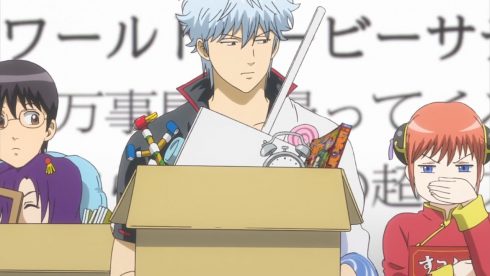 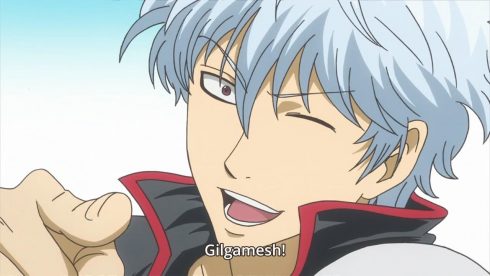 I suppose the little fact of more story rather than gag, makes this show a little easier to blog than before. As the years have gone by, and Gintama has come and gone multiple times, I’ve always aspired to be able to blog this show. I definitely tried a few times, but rarely ever succeeded in keeping up with and blogging it effectively. But  just as Gintama has evolved and matured  over the past 10 years of its existence, so too have I improved a bit since the last time I tried to write about it. This time, I hope to be able to blog this show till either its next hiatus, or perhaps even its end?

See that’s the other major difference between this return, and previous ones. In late 2016, the Gintama source material manga started on its “final arc”. After nearly a decade of slow and careful build up, tons of laughs and tearful moments, Gintama’s story is actually on the verge of wrapping up. The fact that we’re getting an anime at this point, that’s jumping straight into a serious story arc without any funny gag episodes, is an indication of the fact that this time, the show means business. 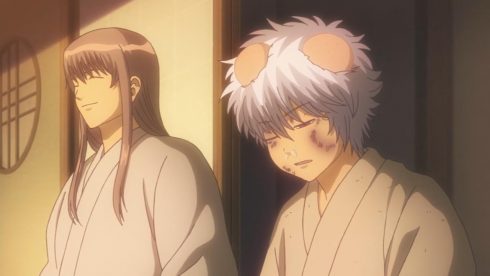 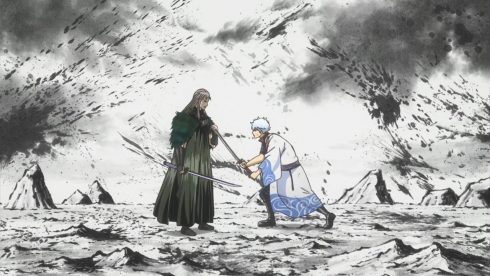 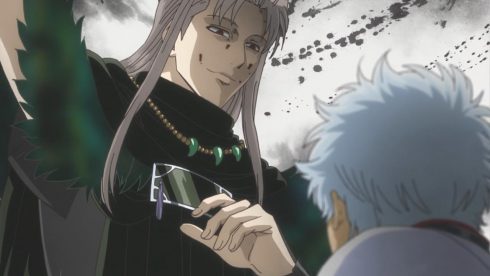 Serious business is probably the best way to describe this week’s episode itself too. After that pre-episode gag, the show pretty much jumps right into a Flashback of Gintoki as a child, training with his teacher Shoyo. The flashback is quickly revealed to be a dream, and a nightmare at that, as the loving face of Shoyo is replaced by none other than series big bad Utsuro.

And if you remember the last arc, Utsuro was revealed as having the same face and body as Gintoki, Katsura and Shinsuke’s teacher. This was a big twist that was thrown in during an arc where we had the Shogunate pretty much crumble, ShigeShige Shogun die, The Mimawarigumi and Shinsengumi pretty much dissolve. The board and pieces have been rearranged so thoroughly, that its hard to feel comfortable jumping into the world of Gintama this time, as it has been in the past. 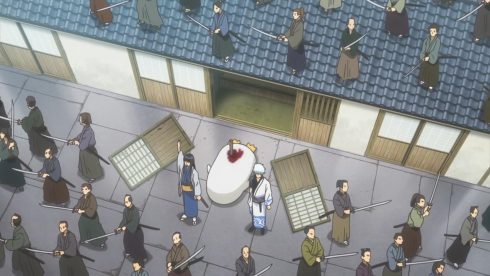 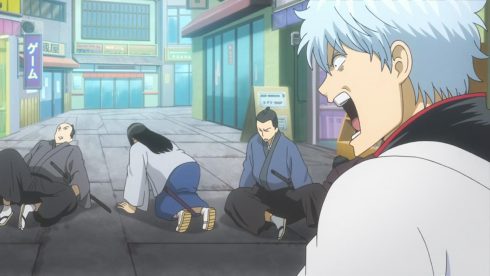 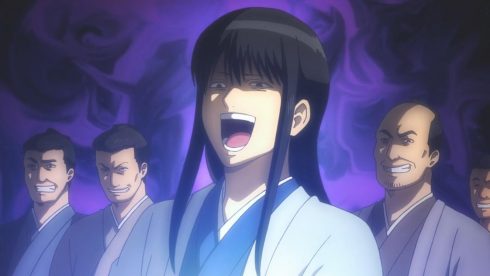 That I think, is the biggest difference between this latest incarnation of Gintama and all the other times we’ve seen it. It has always felt like the world of Gintama was a sort of weird, Medievil Japan Scifi escapist fantasy. And for me, it was always just great to have the show give me the big bursting laughter that it so effortlessly brought out from me. Peppered in between the humor and fun, were the occasional “emotional” story arcs that came out of nowhere and were a real treat. These story arcs were important, because they, were where the series plot would progress, and the status quo would either change or a new character or aspect of the world would be introduced.

This time, in this week’s episode, Gintama pretty much shoves in a few hilarious scenes here and there, but the show is much more interested in focusing on a serious story arc from the get go. Spoilers from the OP theme aside, we learn the story behind both Utsuro and the Tendosho this very week, at the very start of the story arc. Those reveals really surprised me, as I expected the show to take its time on that whole idea, and interlace it with some interesting character backstories. Turns out that what Utsuro is, is nothing more than a plot point, and one that Sorachi-sensei isn’t interested in spending too much time on. 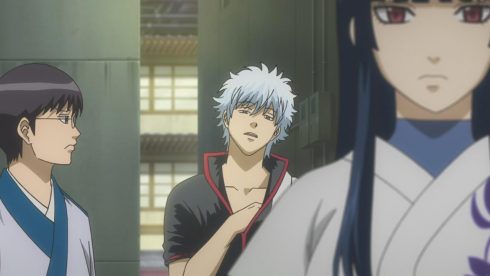 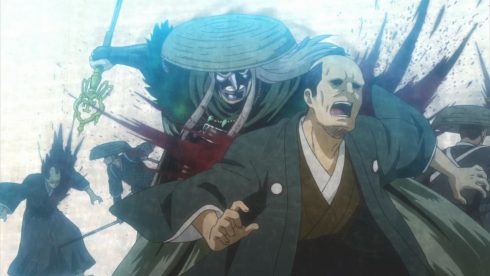 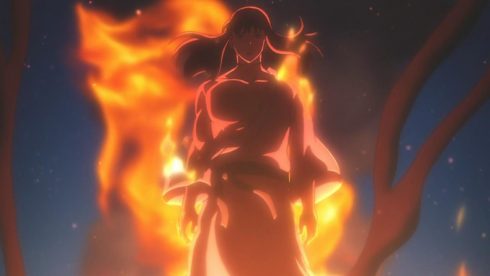 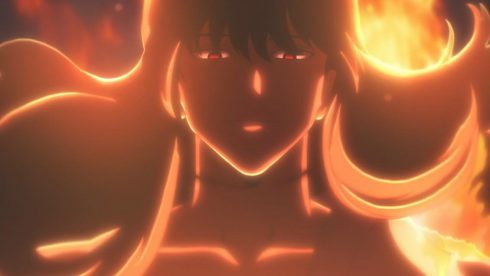 Which, I guess works both, for and against this episode. This is still good stuff, but the fact of the matter is that the story is counting on all the development its done thus far, to have you care about Gintoki’s big antagonist this time, and isn’t so much really opening with a bang. This episode felt more like a continuation of the previous stuff we’ve seen, rather than a actual new beginning.

So Lets talk about Utsuro, the big bad of this arc. Utsuro is basically an immortal, reincarnating monster, one that’s basically become the most “dangerous being in the entire universe”.He’s already taken care of Kamui and Shinuske’s remnants, and also taken control of the universe’s biggest crime syndicate. Its up to Gintoki and Shoyo’s other pupils to basically take the guy on and save the universe. Its a pretty standard, cliche plot line, and feels a lot less personal than the sort of stuff we’ve seen from Gintama thus far. 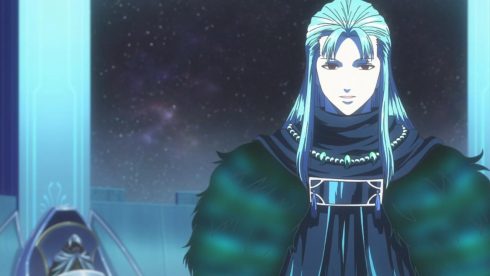 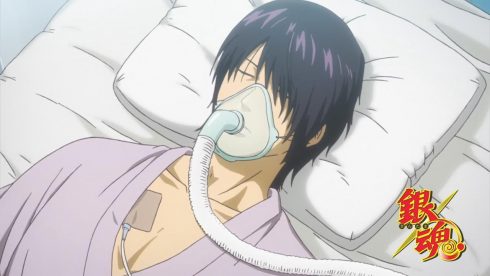 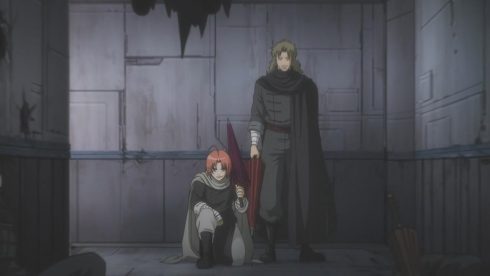 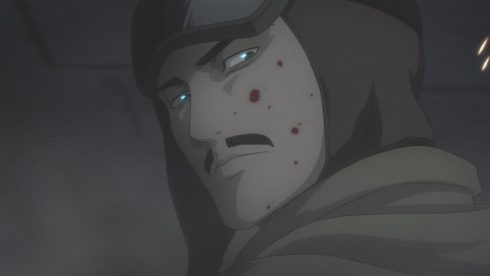 Again, that’s not bad, just different. As Gintoki himself kind of recaps, each of the big story arcs started for a very personal mundane reason. “A guy pissed me off and I kicked his ass, he just happened to represent the country.” That whole line, as funny as it is, is so representative of the kind of starts we’ve had from the show’s story arcs thus far.

Yet here we have Nobume come track down Gintoki and the rest, who are in hiding, and then we get the standard info dump and recap for what’s happened since we last saw them. The big tidbit in that whole flashback, is of course, the fact that Umibozu (Kamui and Kagura’s father) is working with the Tendoshu (Utsuro’s evil organization). This of course, makes it pretty personal and big for Kagura to get involved, so that’s sowing the seeds for something powerful between her and her family, which is exciting, if nothing else. 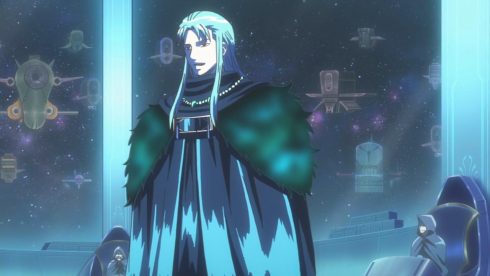 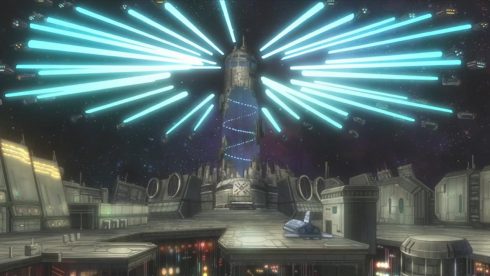 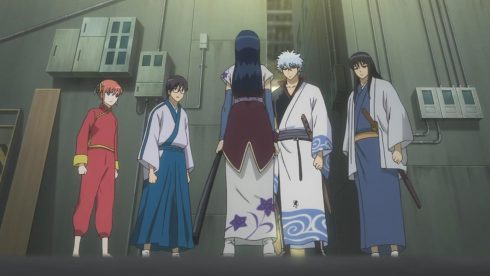 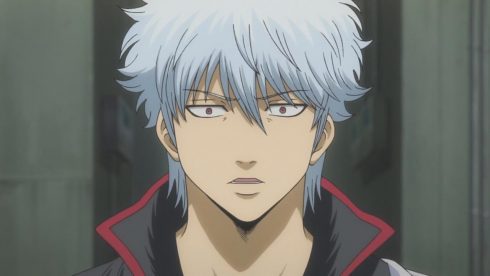 Which, in the end, is what I felt leaving the episode. I wasn’t blown away, but definitely excited for what we’re going to get. This was a setup episode, and while it wasn’t Gintama’s most elegant start, we have pretty much jumped back into the story. There were some pretty hilarious jokes and laughs (Love Livers! XD) inside a pretty dark and dire situation, so in the end, I’d say Gintama felt like Gintama. Its given more into its story driven self, and is focusing on moving things towards a definite conclusion.

I know I should be happy about that. I know I should be excited about the fact that we’ll be getting some big payoffs and epic moments that this story has been building up to. And a part of me definitely is excited, but the other part, the one that wants to see Gintama goof around a bit more before getting down to business, that part’s a little bit sad.