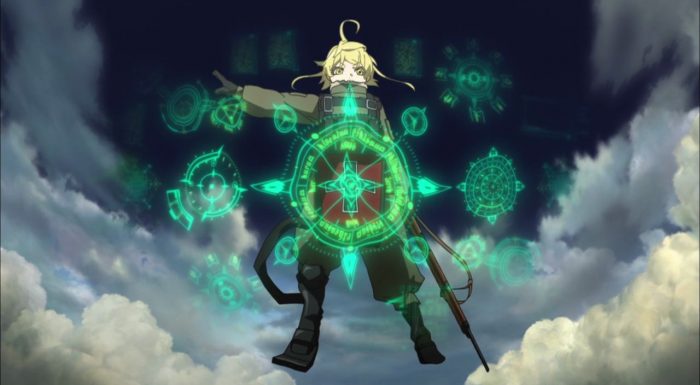 Every so often in an anime season a series comes along that you enjoy even though it is generally nothing like what one normally watches … these types of series sometimes find themselves in the “guilty pleasure series” category. (For example, last season the Keijo! anime was just such a series for many.) I think that this series we are currently looking at is a good example of such a guilty pleasure for me. What can I say? I like it. It is grim and silly and quite dark at times, but for whatever reason it clicks with me. It was not an unexpected enjoyment, though. I had read the few chapters available of the manga adaptation (with very different visuals, by the way) before the anime adaptation aired and experienced the same thing – and as often happens, both adaptations are quite different from the source novels.

First things first though. Here is a summary of the series overall: “On the front line of the war, there’s a little girl. Blond hair, blue eyes and porcelain white skin, she commands the army with lisping voice. Her name is Tanya Degurechaff. But in reality, she is one of Japan’s most elite salarymen, reborn as a little girl after angering a mysterious being X who calls himself “God.” And this little girl, who prioritizes efficiency and her own career over anything else, will become the most dangerous being amongst the sorcerers of the imperial army.“ 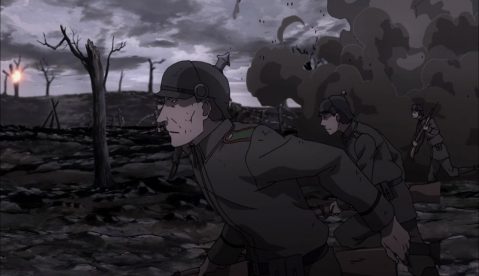 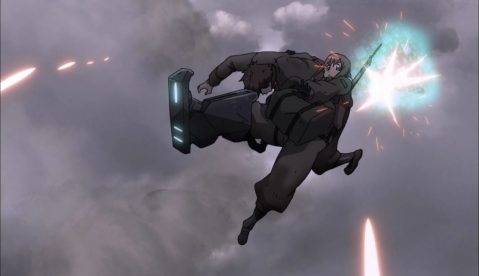 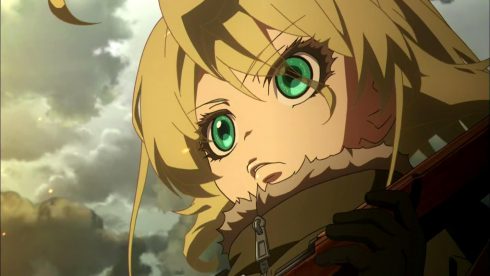 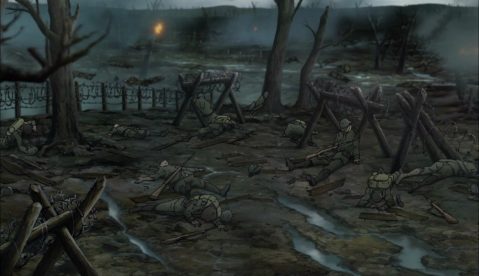 First and foremost let’s get a few things out of the way. This is NOT a pleasant story. The lead character in this series is a ruthless, perhaps almost amoral personality who is an eerily extreme example of utilitarianism and achieving “results” – and she is like that both in combat situations and in dealing with subordinates … she also expects it from herself. I don’t think she is quite as far as “evil” per se – when it comes to efficiency and respecting the rules, she’s a scarily emotionless machine that will not hesitate a single second at doing morally questionable acts. And that’s why the military commander at the end of the episode is so afraid of her and calls her a monster. (Fortunately to balance things out a little bit Tanya has a close subordinate who seems the polar opposite of what she is – someone who is caring, normal, perhaps even gentle, but who is brave and goes out of her way to obey others and protect comrades when possible.)

Also, the setting is a dark one, both literally and visually. It takes place in an alternate world during their equivalent of World War I (no, there is no such thing as Nazi’s anywhere in sight – that is World War II folks). And World War I means the horrors of trench warfare, lots of dead bodies, brutality, mud, rain, corpses and the rest – it is not pretty nor “inspiring” nor about “heroes who save the day”. Airplanes are not present, it seems (yet), but thus far the flying element in the war are hard-to-find (let alone train or cultivate) mages who can fly, use shields, enchant their weapons, and so on. Tanya is one such mage, and she is an incredibly powerful one even at such a young age – she has several kills already and is regarded as an ace and has received medals as well as a nickname that is known in many places of her country’s military. 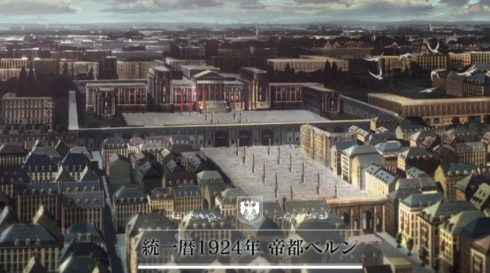 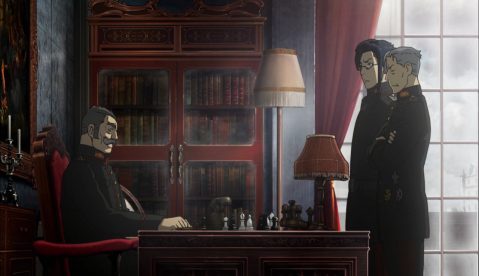 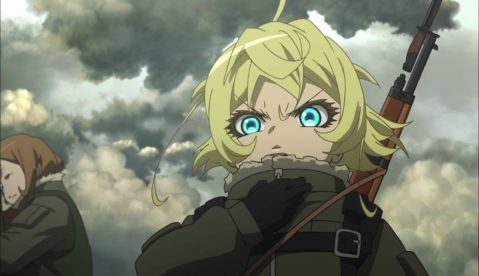 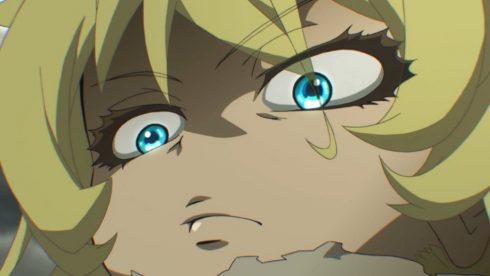 So why in the world would someone want to watch such a thing? Well … I think one appeal can be found in being close to Tanya and seeing how she thinks and reacts to others and her surroundings. A few decades ago the movie “Silence of the Lambs” (albeit a stronger subject matter in my opinion) was a big hit in part precisely because many people were curious (in a scary kind of way) of getting the chance to peer into the mind of someone who is twisted. I think that may be part of the appeal for some with this series. This aspect of things is especially present in the novel source material. There are already several volumes of this (7 volumes last I checked) and the narrative style of them is extremely “inside the heads” of the speakers. The manga reflects this same aspect of things, but to a limited degree. In other words, the source medium goes into great and painstaking details to give examples of how she thinks about and goes about doing what she does.

This very quality, incidentally, is why some were surprised when they first heard this was going to be adapted into the anime medium, wondering how it would/could be “translated”. The anime in the beginning episode has opted to “hook people in” through the action angle in the first episode proper, only dropping teeny, tiny hints here and there that something else is going on. Very likely in future episodes they are going to do flashbacks that will unveil the aspect of how the soul in Tanya is a reincarnation of a middle aged salaryman from Japan (whose specialization was optimization and downsizing companies, by the way – he was very effective at what he did but was understandably hated by many people). 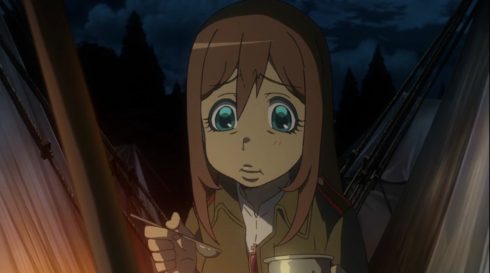 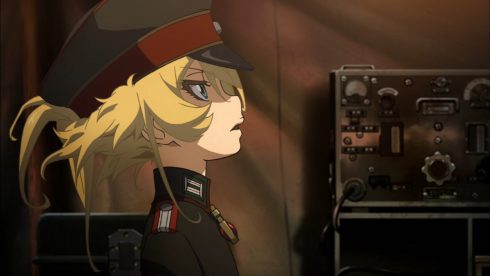 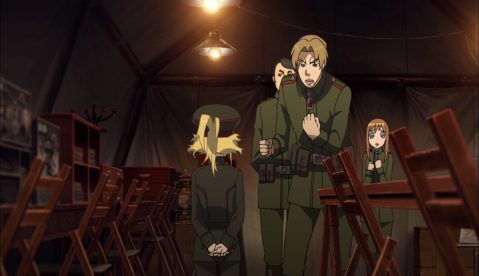 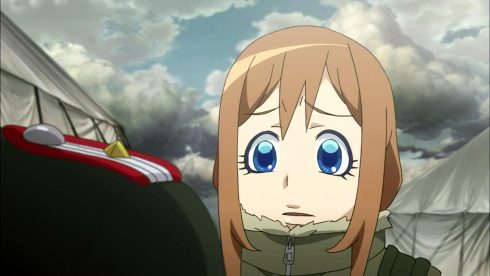 A few things about the anime production qualities themselves. I happened to really like the dark and even ugly animation standard that was shown in the first episode, though I know it is an exceedingly personal thing and that many might be turned off by their … “deliberate oddness”, I guess. I heard one person describe it as a combination of an ugly-cute/ugly-war style. The director of this series (which is the first foray into anime by the newly formed NuT studio) also directed Dantalian no Shoka … a series that is one of my favorite “cult classics”, I guess one could say. Also, the animators for NuT are a large number who left Madhouse some time ago but had worked on such series as Death Parade. And the visuals in Youjo Senki do remind me of some aspects of both Dantalian no Shoka AND Death Parade.

While the absolutely stunning backgrounds stand out quite a bit the flight action sequences (and the accompanying soundtrack of the episode as a whole!) are also quite good – the fight near the end in particular when Tanya singlehandedly took out twelve or so top notch enemy mages was excellent, all the way down to her “finishing move”. Also kudos go out to Yuuki Aoi for doing a splendid job VA’ing Tanya’s character! And by the way, while I am thinking about it I should point out what appeared to be an oversight in CR’s subs. Tanya flew up into the air over 10,000 feet, NOT meters. (If it were meters that would be higher than Mt. Everest!) The manga reads the same unit of measurement. Apparently the audio source only said that she was “flying near to 10,000”, and since the country of France does not use the measurement unit of feet but meters an “educated guess” was probably made – understandably but incorrectly, it seems. 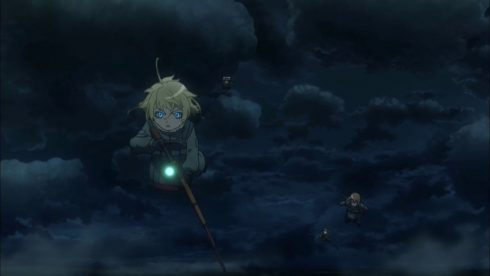 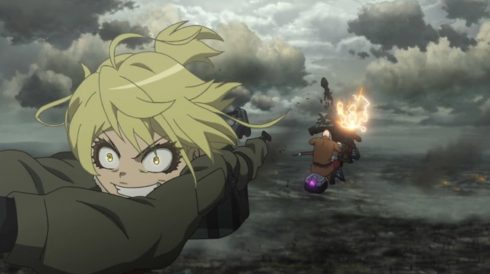 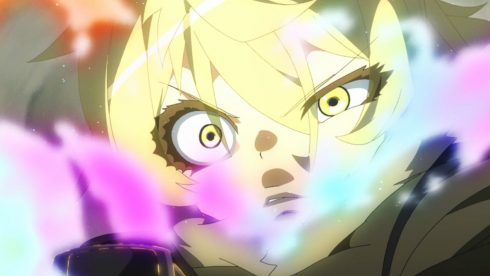 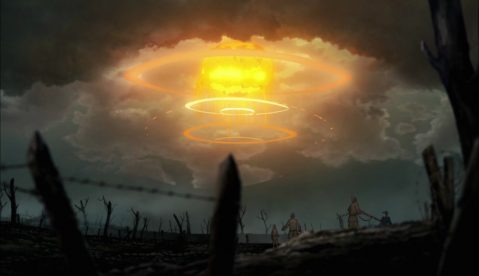 So then … should one give this series a try or no? I … honesty do not know! XD There are several things about it that I could see turning many viewers off, but I also think that one of the contributing reasons why viewers might be turned off in the first place is having misconceptions of the type of series they are getting into. In some ways this series vaguely reminds me of last year’s Overlord anime – another dark series where the lead character finds themselves forced into another world against their will (though he had a different means of arriving there as far as we could tell) and whose actions are absolutely NOT heroic, idealistic or “uplifting”. Perhaps if you liked Overlord one might enjoy this series? I have a feeling that this series will be one that many will either enjoy or dismiss. All I can do is recommend trying it out and deciding for oneself. ^^ 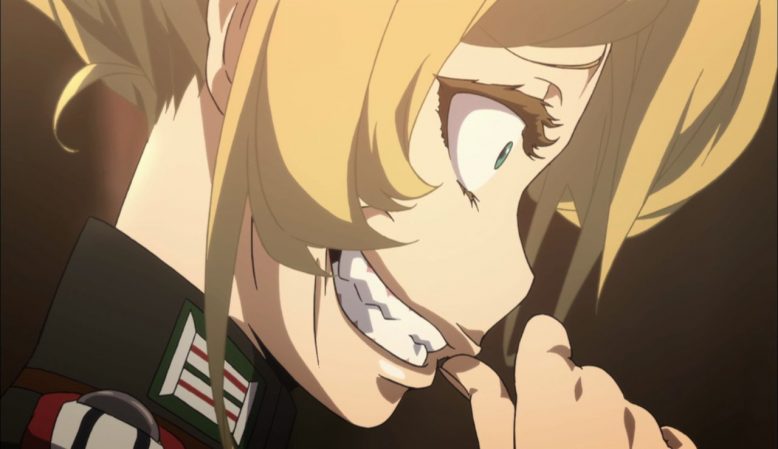 Default not a “smile to protect”, but a smile to be protected FROM.