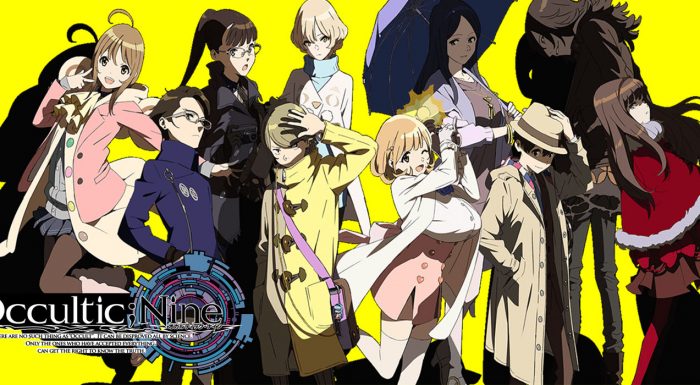 Occultic;Nine is an anime series based on a light novel written by none other than Chiyomaru Shikura (the creator of the much beloved Steins;Gate franchise). As such, its not hard to imagine that Occultic;Nine seemed like one of the big heavy hitters for the Fall 2016 Anime season. Expectations were high for a story that would have the emotional resonance and twisty/turny plot of something akin to Steins;Gate. But while Steins;Gate was originally a game, Occultic;Nine was a light novel, and its in perhaps that difference of source medium, that Occultic;Nine ends up being a rather different series than one would expect. 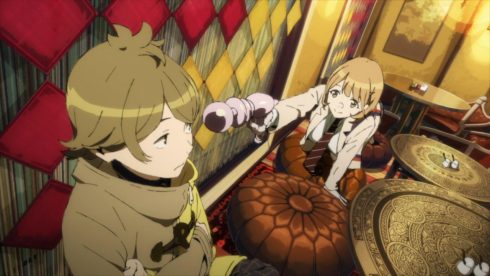 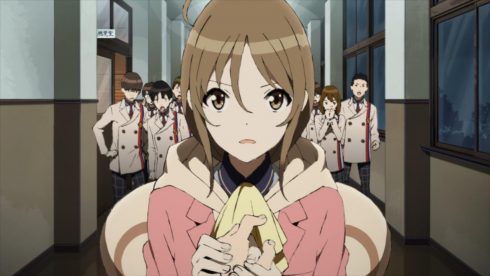 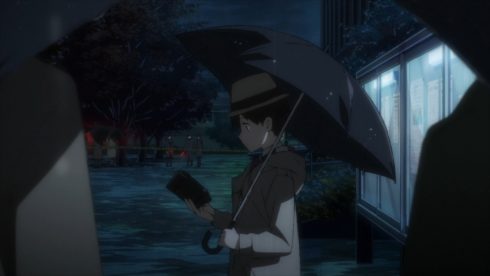 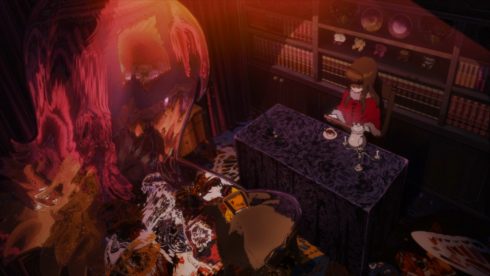 Leaving the question of whether Occultic;Nine is good or not for a second, what’s most striking about the series is how unconventional and outright weird and bold it is. Light Novels, by their very nature are a medium that focus on dialogue and telling rather than showing, and its that very fundamental quality of the medium, that perhaps makes translating them into the very visual and auditory animation form, so difficult.

Occultic;Nine’s solution to this particular conundrum, is bizarre to say the least. It doesn’t seem to edit, restructure or do anything notable to translate the story its telling for the medium its telling it in. Instead, what we get is a show that feels like its a car running on nitro fuel, zipping through every different perspective, nook and cranny at a dizzying pace. Odd, disjointed and frankly jarring pacing is accompanied by rather intense, long-winded and confusing info dumps that come in the form of characters basically going off on some kind of rant. 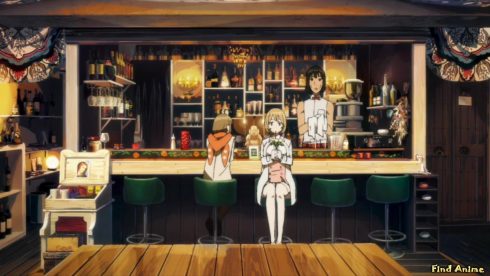 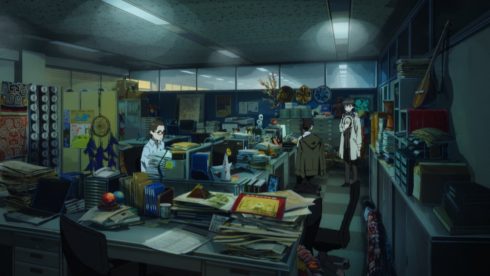 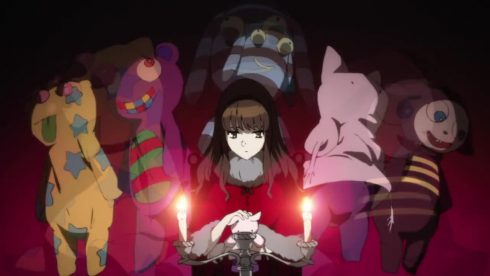 And its that weird info-dump, rant like quality to the dialogue, that is perhaps the most unique thing about Occultic;Nine. Its an anime series that tells first, and shows later. Its an anime series that doesn’t care about giving the audience any room or space to breath, and bombards them with plot twists and long dialogue sequences that are, if nothing else, not exactly easy to follow or digest. Its a presentation style and a storytelling style that’s, for lack of a better word, just bizarre. And yet, it doesn’t feel unintentional, because the show continues to employ that style, even as it tones it down with time.

An interesting side effect of this particular dialogue heavy information dumping, is that the characters become very easy to dislike and get annoyed by. At first glance, these are good characters at their core, each with a solid character arc, real stakes and faults and positives that do make them into deep characters. The problem, however, is that a lot of that good depth gets lost in the noise of their dialogue, the extreme over the top ways in which they act, and how quickly the show switches from one set of characters to the next, often times juggling three to four storylines per episode. 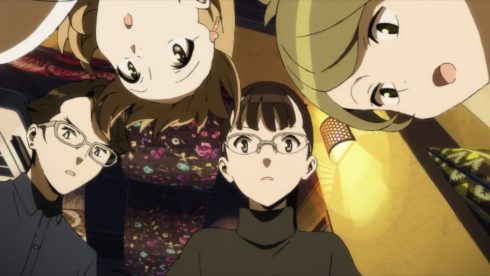 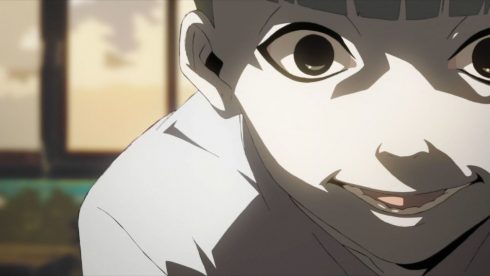 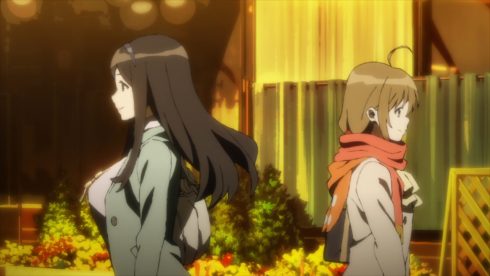 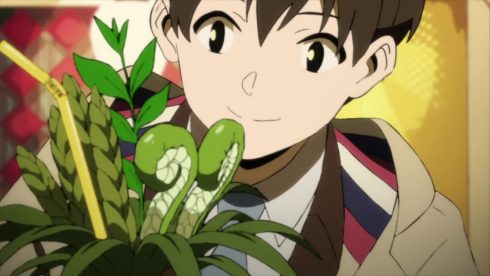 Buried in between the rather noisy storytelling style, is a cast of characters that deal with various mysteries and personal quests that eventually converge into a major storyline. The plot, or rather the idea of the plot, the core concept behind it, is both pretty darn simple and yet elegantly well crafted. The way the anime carefully weaves all the seemingly disparate plot threads into a combined whole, is mesmerizing to watch, and a joy to see unfold. Its the same sort of complex, intricate storytelling that you expect from Chiyomaru Shikura, and is very reminiscent of his more popular work, Steins;Gate.

Added to that, the characters, despite initial appearances, come together quite well as a team, and each character’s arc’s ending, is a satisfying payoff to that rather high initial price of investment. These are characters that are annoying at times, and sometimes almost require a mute button, if nothing else, but they’re good people and their stories and struggles themselves are interesting as ideas. Which is kind of inline with the rest of Occultic;Nine’s quality as a whole. 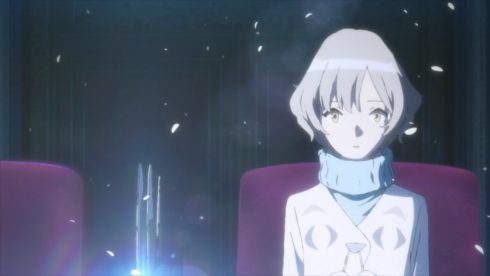 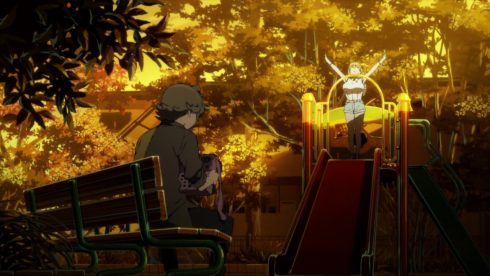 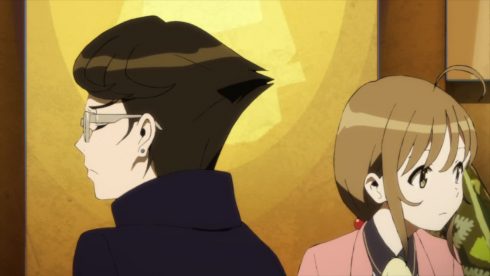 Which… I suppose brings us back to the big question of whether Occultic;Nine is a good show? Honestly, I don’t think it is. Its watchable, and its definitely an interesting and different experience. It does, unfortunately end up gambling too recklessly, and ends up hurting itself and its own experience in the process. What the show and this particular story need, is restraint and subtlety for it all to work. What Occultic;Nine does, instead, is amp up everything to an unbearably loud and hard to follow level. The characters are too over the top, the dialogue sequences are too long and put in too many fancy fake terms, the pacing is all over the place, and well… You get the idea. When it comes down to it, all these faults of the show feel like barriers that prevent the viewer from actually enjoying its actual good parts – The solid character moments and interesting plot twists.

Its a darn shame, because its easy to see how a story like Occultic;Nine could work if it had the restraint, control and careful methodical pacing that it so needs. We do in fact, have a pretty strong example of that, and that series is known as Steins;Gate. The one difference, I’d say, that makes Occultic;Nine stand out, is that while its mostly a collection of strewn together conversations and characters interactions, it does feel more grand and overarching in terms of the scale and scope of the story and its stakes. 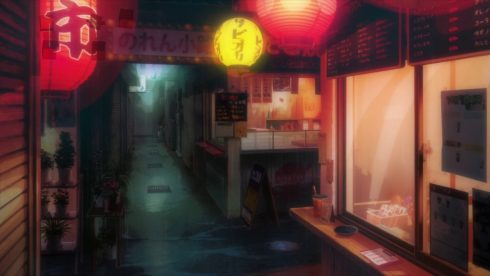 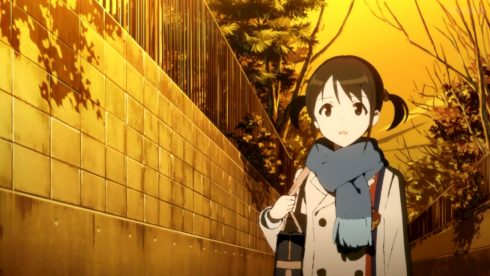 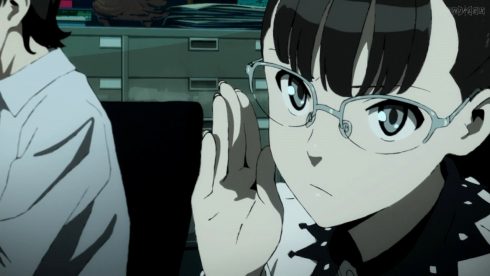 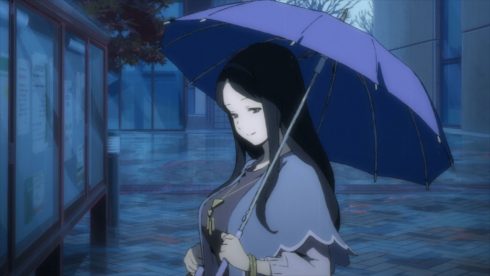 Steins;Gate felt like it was sitcom style drama in terms of scale. Mostly everything was limited to a room or two for the majority of the story. Occultic;Nine has multiple locations and characters moving around and seeing different things. Its got a sprawling nature to the story, which, honestly does feel more epic, if nothing else. Its an interesting little step up from Steins;Gate, and I do wonder if perhaps Shikaru-sensei’s next work will be the true evolution of his writing style.

It feels like the story suffers because its from a light novel, and because Shikaru-sensei is adapting his style to the tropes of the medium that he’s writing in. Which, I think is a mistake, if only because his talent and particular style are something wholly unique, and don’t require super over the top characters, or never-ending monologues that serve as info dumps. I suspect, that Occultic;Nine is Shikaru-sensei stretching his wings, and experimenting with new things and techniques that he isn’t quite used to. While I don’t think that he succeeds here, I’m sure that the bold moves he does make, will inform his next creative work, whatever that may be. 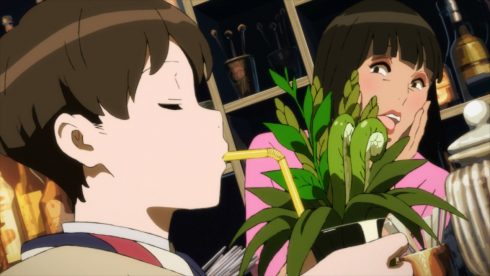 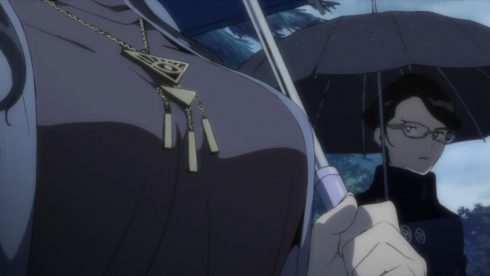 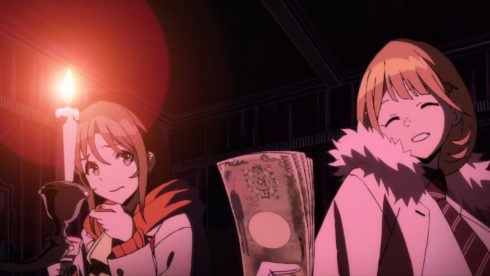 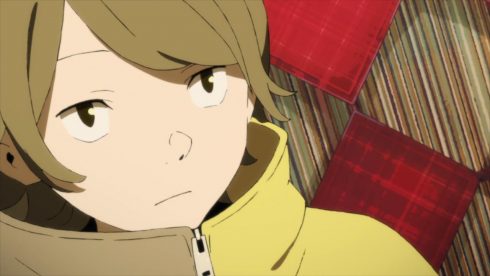 Of course, the one thing left to talk about is the production, since Occultic;Nine is an anime series after all. The visual nature of Occultic;Nine also seems to take a tonal note from the storytelling. There’s weird camera angles, breaking of basic conventions like the rule of thirds, out of focus characters, wide shots that feel like bad compositions and a ton of cinematography choices that feel experimental and kind of intentionally jarring. Its again, the show trying to be a rebel and a rule breaker, but much like its story and characters, it ends up breaking one too many a rule.

Cinematography aside, the art direction and animation themselves are fairly standard. There’s nothing super original or edgey in that particular aspect of the show, and if anything, the lack of action or intense motion in most of the show, probably helps keep the show nicely in budget. The art direction, is pretty nice, moody and dark, and conveys the murder mystery slasher kind of vibe that the show is clearly going for. If Occultic;Nine succeeds at anything in a very traditional sense, its in the art direction and use of color and light, more so than anything. 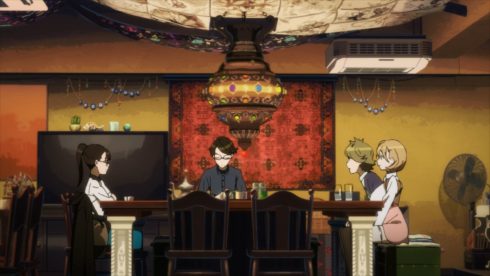 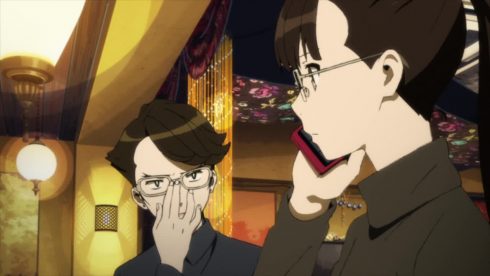 The sound work in the show is pretty inline with the art direction. Its competent, solid and fairly well executed. There’s nothing very very outlandish or impressive here, but the show does a nice job of keeping tone, atmosphere and mood fairly immersive and believable throughout. The sound track seems like a much more cheery version of Steins;Gate, while the sound effects actually are noticeably good. Finally, there’s the voice work, which… Honestly is hard to judge. Its hard to say if the rather screetchy and over the top nature of a lot of characters, is because of the seiyuu and their performance, or just the script they’re given. It feels like the voice actors in this series are in a bizarre new place as well, and its hard for them to actually mold this bold, weird performance into something palatable.

In the end, I’d say that Occultic;Nine is just a bizarre failed experiment. While the core concepts of this series are pretty solid, its daring choices with regards to presentation, storytelling and character building are essentially mistakes that end up costing the series too much. Will there be people that enjoy Occultic;Nine? Sure, I was one of them after all. But I don’t think that my enjoyment, which was fueled by a sort of morbid curiosity (and probably not much else), is an accurate indication of the quality of this series. 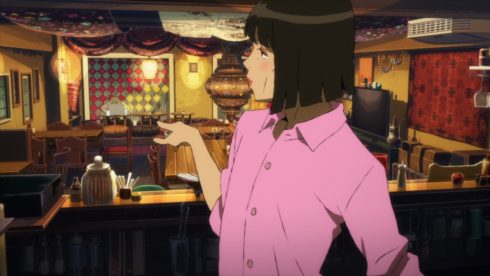 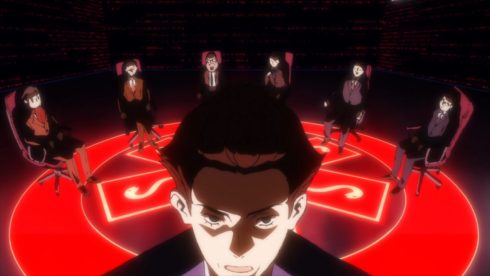 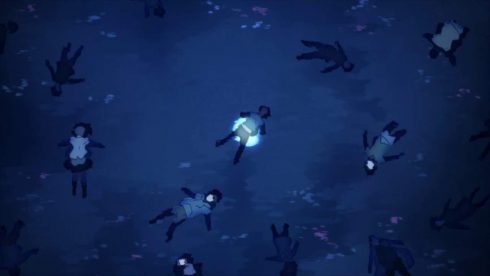 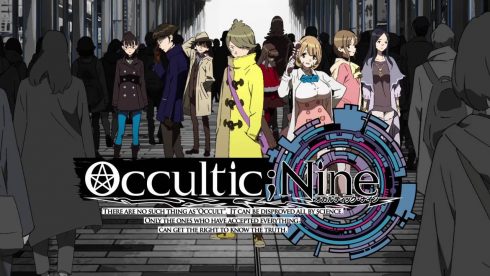 Had this been a stronger season overall, I don’t think I’d have even finished Occultic;Nine, let alone given it a second thought. It feels kind of sad and wrong to reward solid experimentation and genre bending work like Occultic;Nine with such harsh criticism but… In the end, its hard to see Occultic;Nine not offend a ton of  large portion of the audience that it seeks to enthrall. It gets a C+ Grade overall.