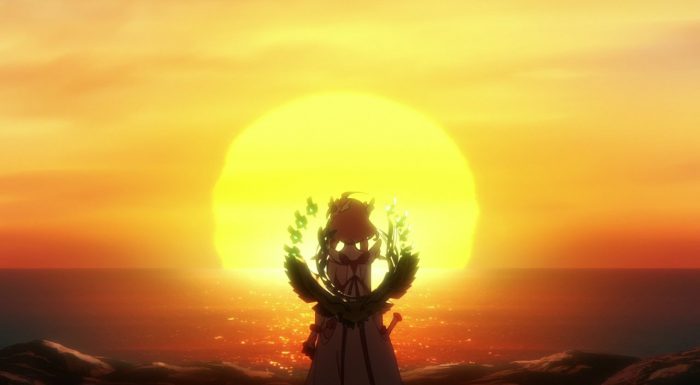 This series was on the radar of odd curiosities before the Fall 2016 began for a couple of reasons – the first was that it was a mahou shoujo based story (a genre I generally enjoy) but more interestingly because it was an anime original story as well as the first such work ever done by White Fox studio. As a studio White Fox is kinda erratic for me … I often enjoy their visuals and audio elements, but the story writing for some of their releases can be erratic for me at best and downright disappointing at worst (the recent Utawarerumono Itsuwari no Kamen series is a good example of what I mean). However, when they are on they are totally on – the Gochuumon wa usagi Desu ka franchise being an example as well as the Re:Zero adaptation – a series which I did not like the source material for but by all accounts was a good adaptation in the eyes of many who were fine with the source proper. This was a chance to see what they could do “on their own” in my mind. 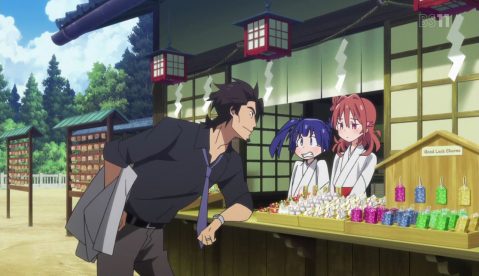 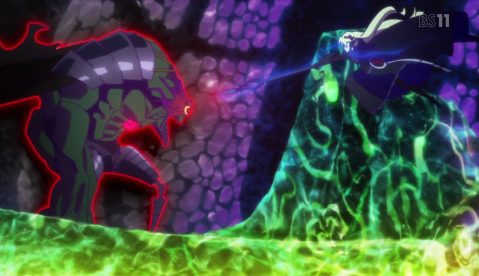 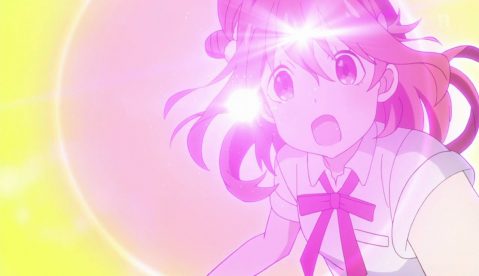 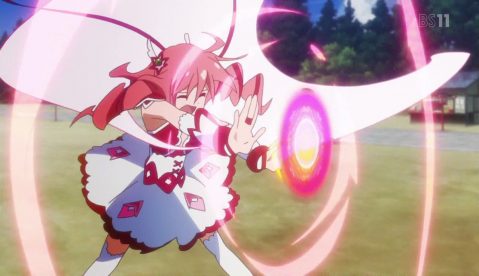 The result after watching Matoi the Sacred Slayer (or Soushin Shoujo Matoi in Japanese)? Color me surprised, and pleasantly surprised. FlareKnight did a good “First Look Post” on the series (generally speaking he seems to enjoy the works of White Fox studio a bit more than I do) but other series held his interest more in the Fall season now in its final steps. For myself comparison wise I found myself enjoying the series more, and perhaps of all the contributers to this blog kept up the most eagerly with it week in and week out – it clicked with me for whatever reasons. On the whole I would say that their first foray into anime only works was a successful one, and look forward to future attempts if they are able. ^^ 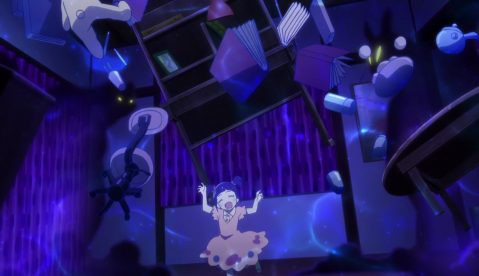 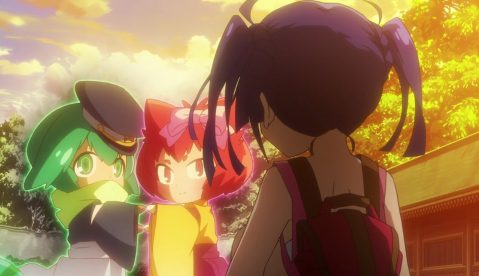 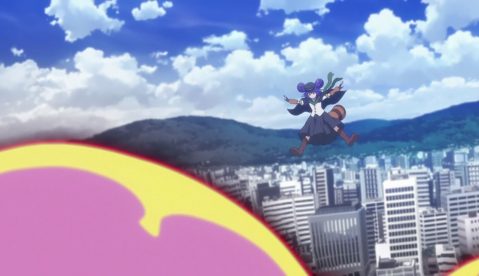 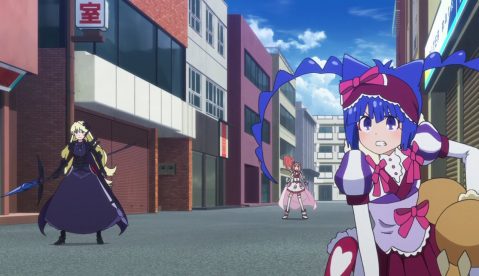 For those unfamiliar with the story’s premise here is a summary: “The year 2016 — In Tenman Shrine in Kamagaya City, Matoi Sumeragi was a 2nd year middle school student working a part-time job as a shrine maiden. Separated at a very young age with her mother, she has been entrusted for a long time with her paternal grandparents, and three months ago she finally started living together with her father Shingo. Because of such conditions, Matoi had been looking up to an ordinary, calm lifestyle. Matoi’s close friend and coworker Yuma Kusanagi was the candidate for the next shrine maiden, being born into the family of the Tenman Shrine’s shrinemaster. She finds out that the family has conducted “exorcism” to rid evil spirits for generations, and attempts the “ritual of divine possession”, a ritual connected to “exorcism”, together with Matoi.

“After school, the two of them head to the shrine as usual, but there they find a devastated shrine and Yuma’s parents wounded and collapsed. Furthermore, there was a man there with somewhat of an aura of insanity, who was a suspect for a mysterious case that Shingo, who is a detective, was trying to crack. Yuma suddenly conducts a “ritual of divine possession” in order to hold the thrashing man back, but it wasn’t Yuma that changes happened to… What was given a girl who was seeking an ordinary, normal life was the power to wield a god and rid evil spirits!? Matoi Sumeragi will earnestly work at exorcist activities in order to regain those calm days where nothing gets in her way!“ 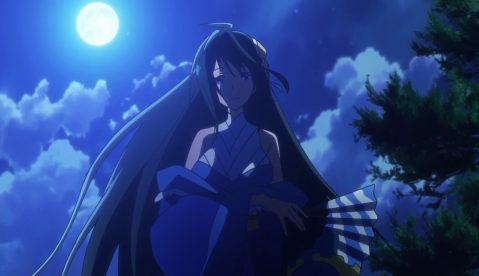 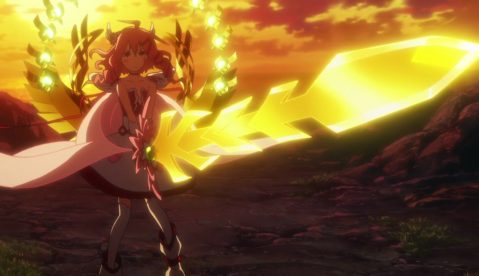 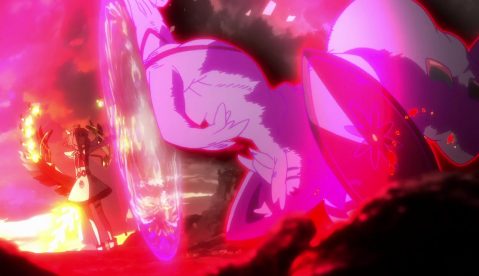 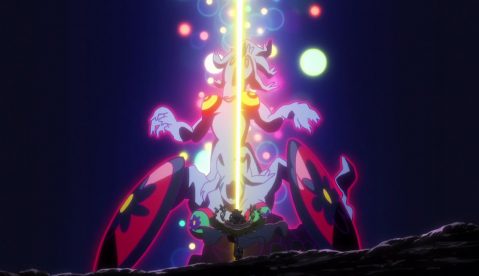 The strengths of the series were definitely signature White Fox studio strengths – I thought the visuals were quite good (even reminding me a little of Trigger studio’s style) and I had no complaints about any of the characters, either – in fact, the cheerfully infectious childhood friend of Matoi (named Yuma) was a delight almost every time she popped up. The audio elements were also EXCELLENT on the whole – and the basic theme song of Matoi’s mahou shoujo mode was possibly the most effective BGM of the season from any series for me (when it first showed up when Matoi first transformed in episode one it literally gave me a “Whooaaa.” moment). But I think the largest (and perhaps most unexpected) element of the series was the story writing. The series as a whole seemed to start out pretty slow, but towards the end of the series it was shown that what initially seemed to be “slow” was actually careful writing building up to a surprisingly satisfying conclusion. Perhaps even one of the best examples of writing this season, actually. 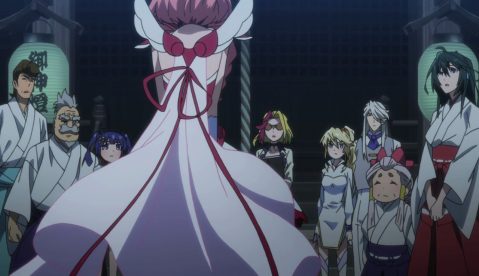 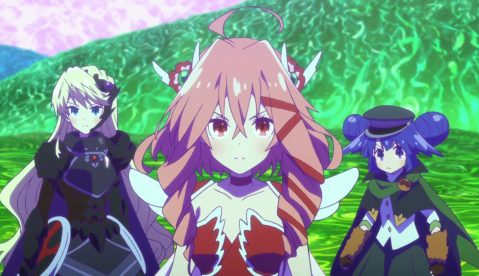 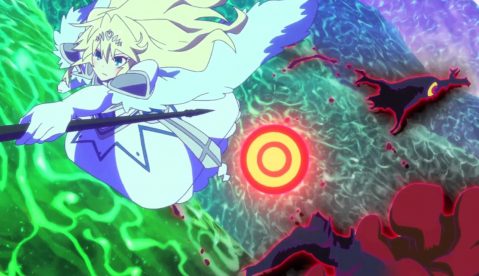 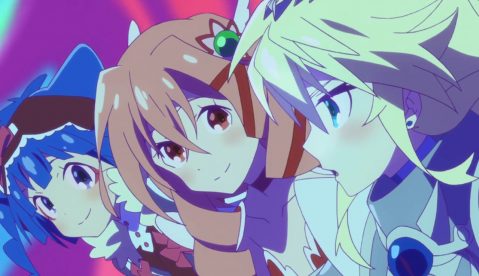 However the series was not without hiccups. It felt to me that White Fox was trying many things at once with their first outing into anime original territory, and while many succeeded nicely (in my opinion at least) there were a few that fell pretty flat and disrupted the flow of things. Interestingly a larger number of these occurred in the first episode. One was already mentioned in the First Look post, and that was the atrocious use of “Engrish” in the anime … this is a thing I absolutely cannot understand, by the way – it is one thing to show a native Japanese speaking English and making a few errors here and there, but quite another for native English speakers speaking amongst themselves. It just sounds sloppy to me. Another element that did not work for me was the unnecessary squirming actions between Matoi’s befuddled and half conscious father and her in her transformed state (where she looks incredibly similar to her mother). And finally there was the element of Yuma breaking the fourth wall. While I admit that it worked quite nicely as humor it did not work when inserted into the story proper. For me it worked much better in the extra episode recap (episode 12.5) where Yuma was basically telling the story of the series proper. 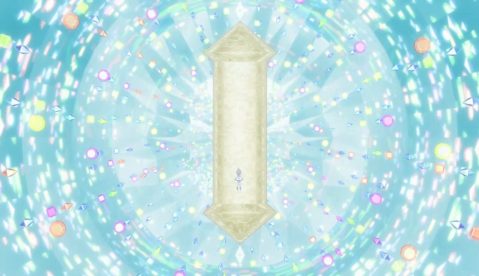 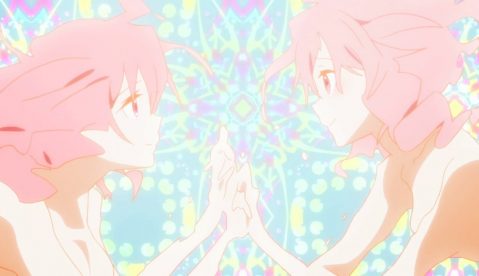 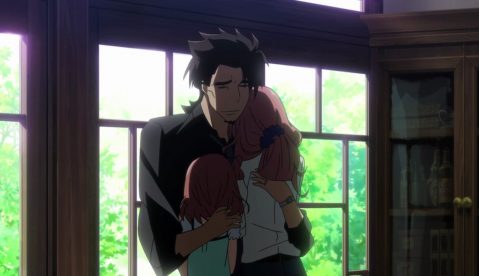 Matoi the Sacred Slayer was definitely one of the nicest surprises of the season for me. It was a good example of using the elements of the mahou shoujo genre to effect by both coloring it with its own story, setting and characters while just pulling off the common tropes and such WELL. There really is something to the old saying “If it ain’t broke, don’t fix it.” I would add to that “Not only is there no need to fix it, but if you do it well with care and creativity you will achieve good results.” For me Matoi does just that. Of all the mahou shoujo themed series that aired this season this one was probably the most enjoyable and effective for me.

If I had to rate the series as a whole I would give it a B+ for enjoyability, but the B+ score is a result of barely creeping over the boundary between a B and B+ grading. I definitely think it will not be for everyone, but I also think that if it were given more time more people would have been surprised for how well the story actually was executed (and would definitely like to see future seasons made, though I rather doubt we will see them). Slow starts in a one cour series have a disadvantage these days when there are so many series clamoring for the attention of the anime viewer, but in this case I think those who exercised patience were definitely rewarded.

in Matoi the Sacred Slayer,Reviews