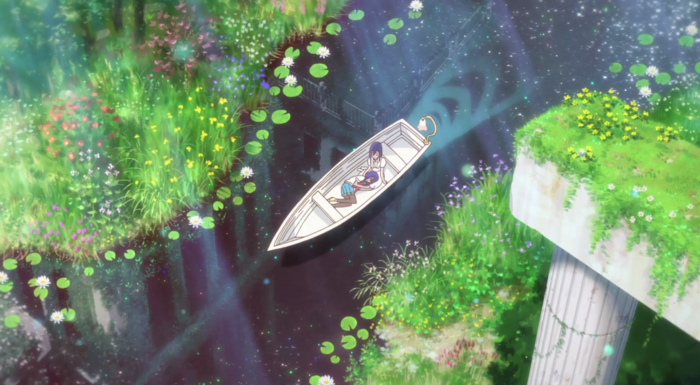 For a show that began with so many abstractions and mysteries, Flip Flappers has developed into a remarkably tight narrative, answering questions, fulfilling foreshadowing, and continuing to strengthen its thematic through-lines and character arcs at every step. While I can’t say I’m as emotionally invested in the current arc as I was in previous ones, I don’t think there’s any question now that the storytellers know exactly what they’re doing and where they want to go. Bonus points, too, that this journey comes with an incredible view.

With Mimi (or at least a few fragments of her personality) returned to the world, Flip Flappers connects more dots between the past and the present. While they don’t spell everything out for us, we’re shown enough to be able to deduce why Salt and his dad eventually split to form FlipFlap and Asclepius (respectively). Both wanted to bring Mimi back, but Salt wanted to free her while his dad wanted to control her, using her power to tear down the barrier between Pure Illusion and reality. 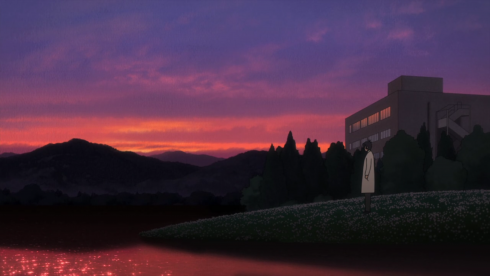 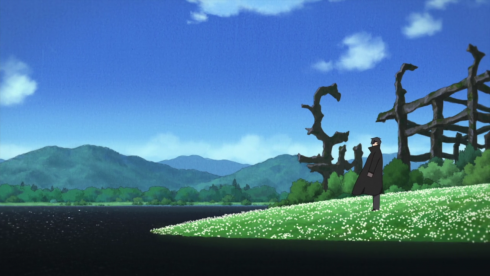 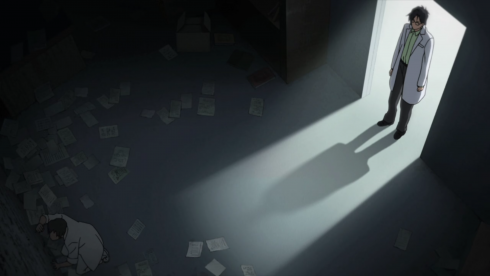 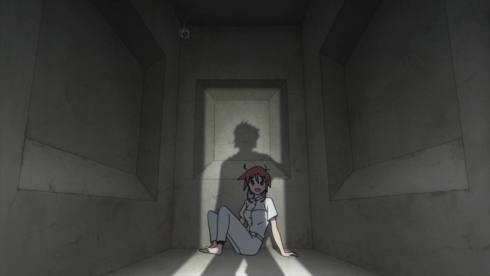 Mimi, meanwhile, desperate to keep her daughter safe, has (seemingly) given herself entirely to the protective instincts within her. This moment happens within Pure Illusion, as she finds herself in a pristine white room and then touches an apple (a common symbol of temptation but also, more broadly, the only natural element in this tiny world) and the walls collapse, freeing her to the vast, flower-strewn realm beyond. Trapped in a so-called “civilized” world that wants to confine and control her, Mimi abandons that world and the person it made her, instead allowing her most primal, protective self to make the decisions from now on.

The walls between reality and Pure Illusion collapse as Mimi becomes a force of nature, defeating any threats with ease. Asclepius has been defined by their ties to science/technology and organized religion, two qualities most commonly associated with human culture and civilization–what “separates man from beast,” as they say. (FlipFlap, on the other hand, combines science with instinct/emotion, which may explain why they’re down but not out at the end of this episode.) That Mimi tears them apart in an explosion of flowers is just one more example of Flip Flappers‘s ongoing conflict between nature and civilization–and right now, nature is very much kicking ass. 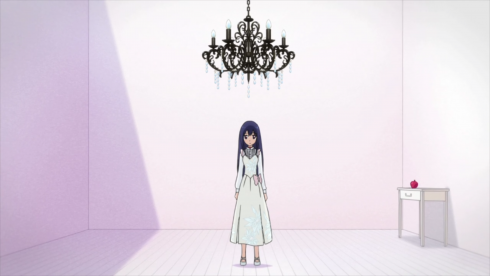 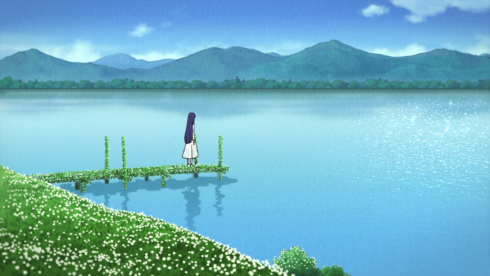 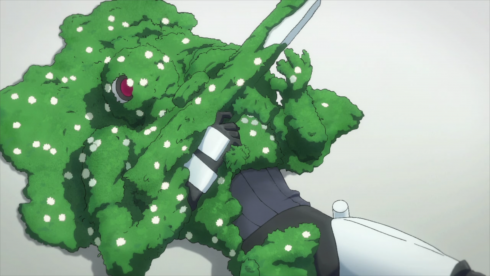 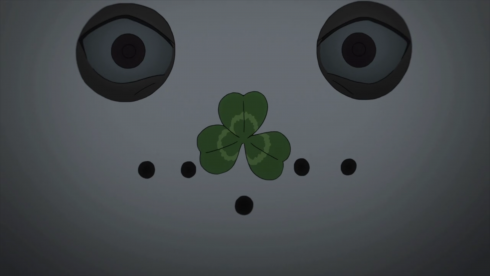 It’s still unclear exactly how Mimi became fragments and Papika regressed to childhood (presumably we’ll learn more next week), but the confirmation that Mimi is “the amorphous” leads us down two roads: (1) It forwards the series’ themes about the many aspects of one’s personality, like we saw with the two Irohas or the many Papieces, and (2) it leads us to a fascinating reinterpretation of everything that’s happened in Pure Illusion so far. Good news for my typin’ fingers: Atelier Emily has already written an essay about the first point, so I’m gonna leave that to her and focus on the second one.

The fragments/amorphous haven’t been passively sitting around all this time, after all. Whenever the girls try to collect one, Mimi’s fragment fights back–the “defense mechanism,” as Yayaka calls it–but more than that, the fragments within Pure Illusion are almost always actively seeking to trap or destroy the intruders. Think of the stampeding snow giants, the manipulative Queen of Masks, the clock tower that resets the Yuri School, the aliens attacking Pops’s city. All had a fragment buried within them. Mimi has been an antagonistic force from Day One. The gals just didn’t realize it. 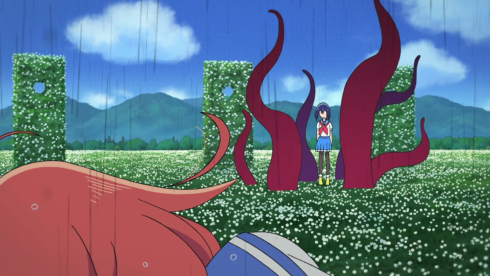 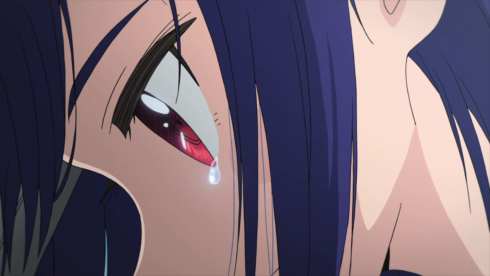 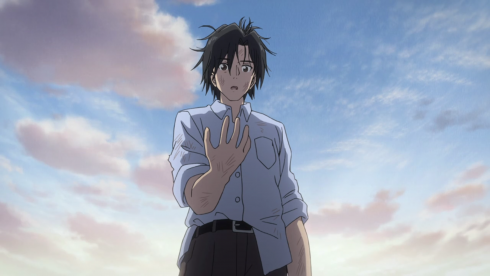 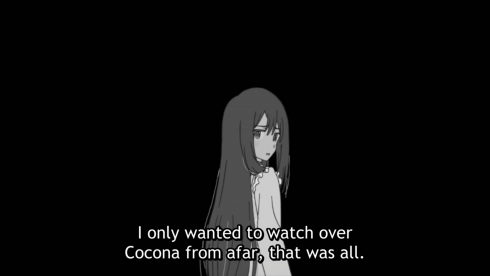 Importantly, though, Mimi’s fragments are also the force that allows the girls to prevail. The fragment embedded in Cocona’s thigh and (presumably) the one in Papika’s ankle monitor are part of the reason they can transform, giving them the power to defeat the attacking amorphous. Similarly, the fragment that first came to Salt asked him to “stop me.” Mimi may have “switched” with the brutal, protective instinct within her, but the other aspects of her personality are still alive, too. And they want to help and empower the people she loves, not hurt and control them.

Speaking in fairy tale terms (because, as the ending theme always reminds us, Flip Flappers is very much a fairy tale), Mimi has come to represent every common female adult role all at once: The loving but absent mother, the empowering supernatural fairy, and the evil witch. She is the contradictory nature of all individuals, yes, but also a commentary on the depiction of women in fiction. She is more than just the princess in distress, or the doomed mother, or the helpful fairy, or the scheming witch. Sometimes she’s none of the above. And sometimes she’s everything at once. 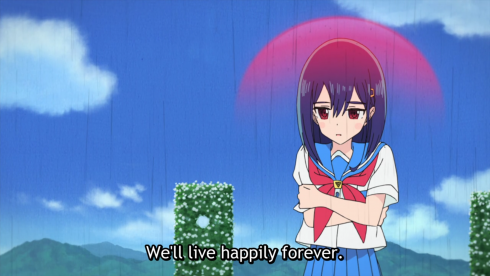 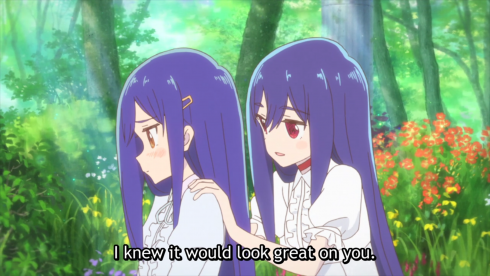 In a likewise contradictory fashion, Mimi’s arrival is both a blessing and a threat to Cocona. At last faced with the parent she always wanted to confide in (and still reeling from the perceived betrayals of the people she loved), Cocona initially embraces this new reality. It’s understandable. It’s not even necessarily bad at first. Adolescence, as we’ve talked about before, is overwhelming and scary. Cocona’s world is changing faster than she can adapt to it. Having a trustworthy adult to give you advice can be a huge benefit, a safety net beneath the tightrope of growing up.

The problem, though, comes when that adult seeks not to just advise, but to control. Mimi wants to “do everything” for Cocona, and even attempts to change Cocona into a miniature version of herself. That Cocona resists this complete destruction of her personality gives us hope that she’ll be able to stand up to Mimi when the time comes, but she’s still mostly a passive presence this week, reacting but never acting. She lets Mimi cycle them through worlds (all ones where nature has overtaken civilization, by the by) until she finds one that speaks to her: The snowy realm that she and Papika first traveled to together. 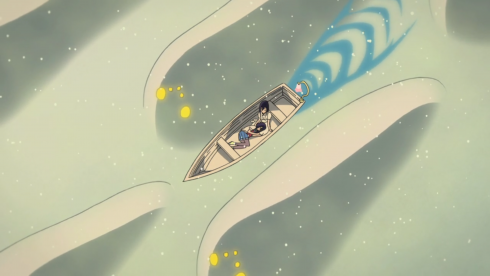 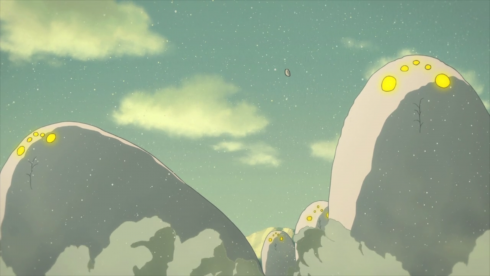 Does this speak to Cocona’s lingering feelings for Papika? Or to her current sense of isolation–of wanting to cover everything in the pure white that her mother wears, to bury the world in quiet and cold? Given Cocona’s own fragmentary nature, it’s probably a little bit of both. Or a little bit of neither. Whatever the case, it’s a precarious position for her to be in. Fortunately, she has two people coming to remind her of the world outside her mother’s–of the decisions she’s made and the struggles she’s undergone in order to become her own person.

The sense of self that Cocona built over the course of the season is in serious danger, as is Mimi’s own complete, complex personality. But with friends like Yayaka and Papika, both daughter and mother may just find that fairy tale “happily ever after” before all is said and done. 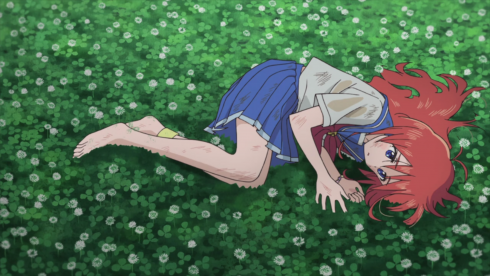 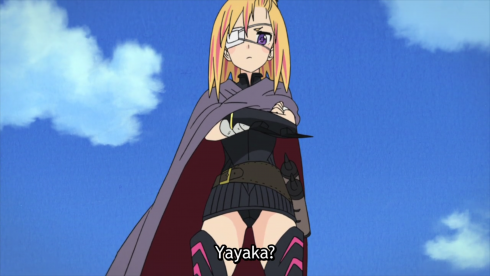