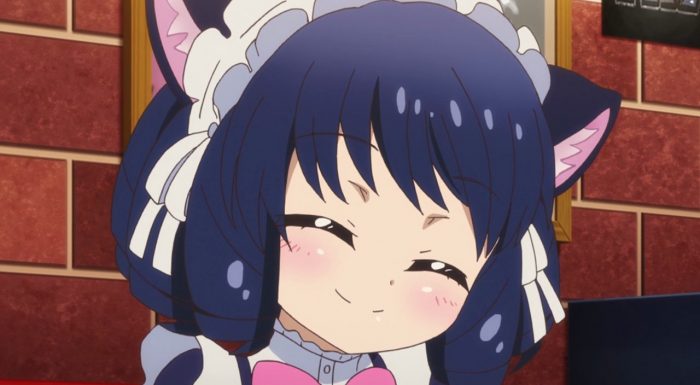 So we finally come to a place where the Queen of Darkness steps fully into the foreground! Victorious is very quickly shown to be inhumanly powerful (way more powerful than Dagger in season one, it seems) and obviously not an intergalactic conquerer queen for nothing. And interestingly, while Victorious steps into the foreground that means that other “secondary storylines” going on at the same time also were initially resolved and a few more plot twists were introduced – ones I honestly was totally not expecting. At the same time, though, one of the more interesting aspects at this stage in the story (that is, on the cusp of the final episode and showdown) are those who have NOT shown up – like the bands Arcareafact and Ninjinriot, for example. I wonder if they will be “allowed” to contribute in the final conflict? 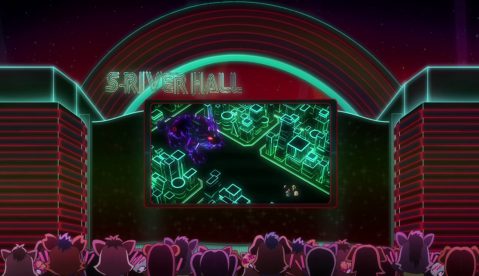 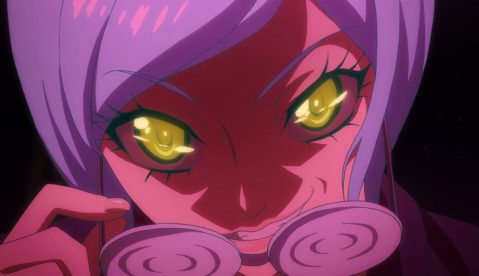 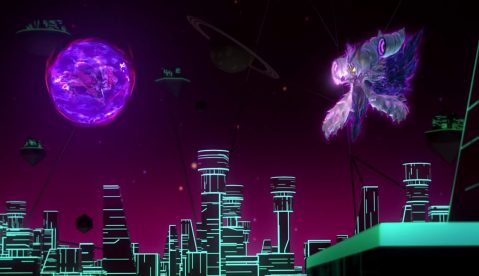 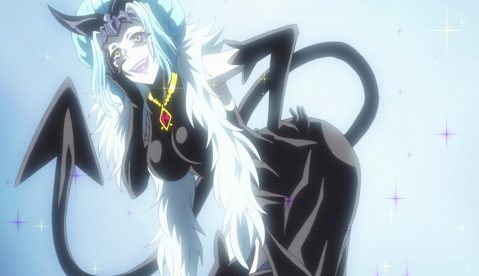 The actual scene where the Queen of Darkness reveals herself is a surprise and one of those “uwah” moments. Right after Dagger forcefully swallows BudVirginLogic and turns them into a dark monster, presumably intending to finally take his revenge of Cyan and the members of Plasmagica, who should appear in the crowd of onlookers but the former manager of Arcareafact who does indeed reveal herself to be Victorious in disguise (the guessing at her identity based on the VA seems to have been correct).

Needless to say, everyone is surprised, and surprised mainly because they had all been going from the assumption that Ailane was in fact the Queen of Darkness and Dagger was in cahoots with her. Which turns out to be wrong – the situation is much worse than originally expected. Victorious forcefully enters the dark monster dimension, paralyzes Dagger’s dark monster, sucks the negative energy out of it and Dagger himself as if she were swatting a mosquito and then, after essentially saying “thanks for the snack” announces her intention to destroy the planet in a couple of days before taking her leave. 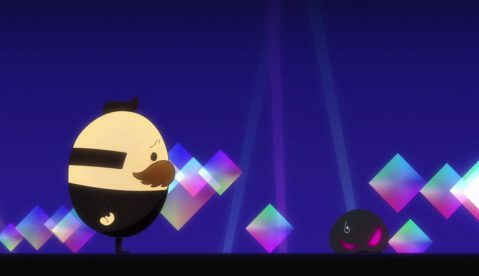 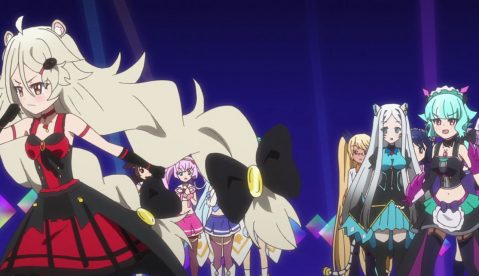 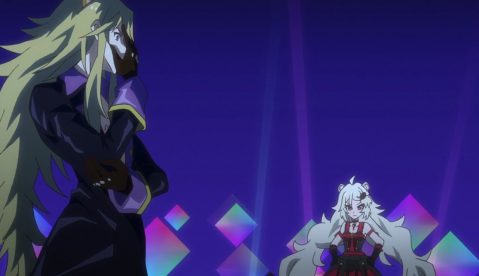 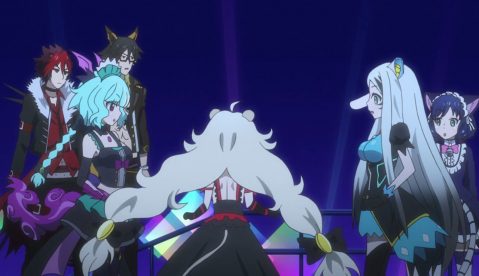 Everyone is quite surprised, as originally mentioned, including Arcareafact’s members, who are watching the concert from the room in the unused part of the underground sewers that Titan and his brothers live in. The members of ShingancrimsonZ are also surprised, but the most surprised is Aion. He goes white as a sheet, so bad that all the other band members notice it – it turns out that the lead singer of BudVirginLogic is … his younger sister?!? What? Now this was something I totally did not expect.

More than that, in delving into the back story of the siblings we discover that they are both from an incredibly wealthy family (even royalty?!?!) and that Aion was kicked out of his house because he could not bring himself to love anything (including becoming the heir) more than music. This meant all the responsibilities of inheritance fell squarely on Ailane’s shoulders … so it’s no surprise that a part of her should come to both love music and hate it at the same time. Dagger was able to exploit the side of her that hated it, but fortunately she was able to be saved by the part of her that loved it. 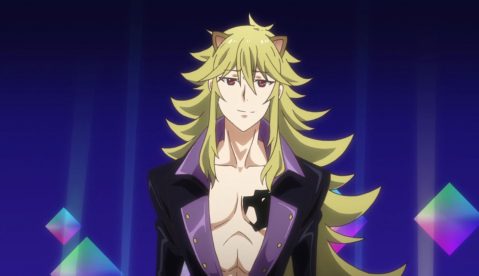 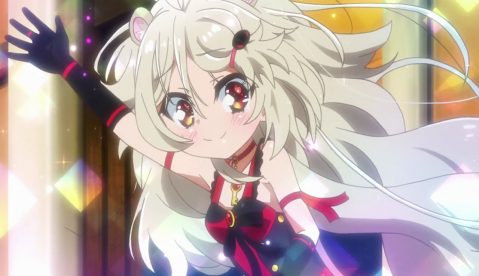 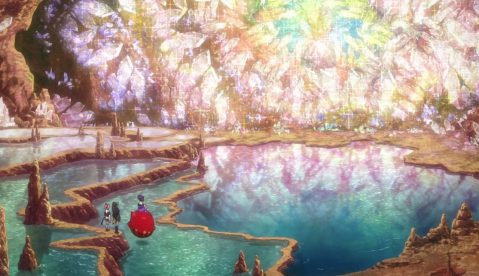 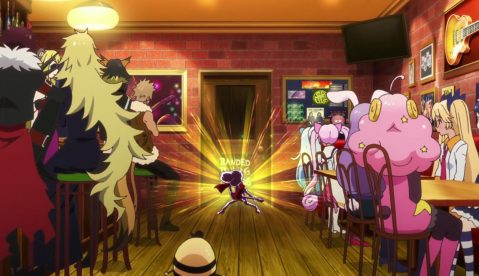 The reconciliation scene between Aion and Ailane was a touching one, I thought. Not brilliantly executed, but done so in a heartwarming, over-the-top way that makes one chuckle … a style the viewers have come to associate with ShingancrimsonZ as a band in general. It was extremely fitting if nothing else, which is plenty good for me! I must say, though, that Ailane is WAY more lovely when she smiles. ^^

Anyhooooooo … episode 10 ends on two hopeful notes (no pun intended) relating to the overall story: the first is with Tsurezurenaru Ayatsuri Mugenan finally reaching the Melodisian Almaz, while the second is with the (rather dramatic and classic style) arrival of Grateful King in Cafe Angelica (with Trichronika in tow) in order to take some practical steps in fighting back and protecting Sound Planet from the Queen of Darkness. 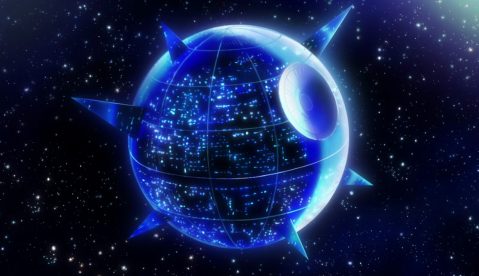 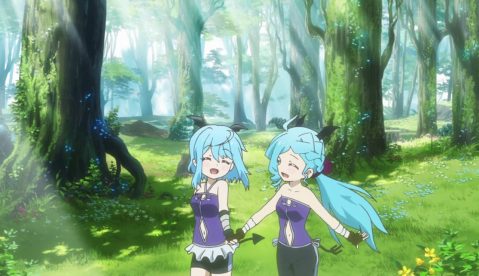 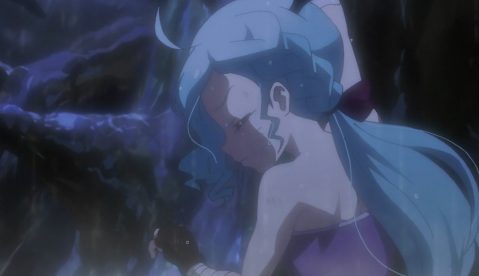 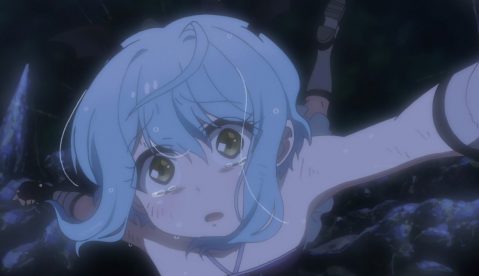 And speaking of the Queen of Darkness, unexpectedly much of episode 11 dealt with what exactly happened that made her become what she is today (was not expecting that either). She grew up on a planet named Ordinis, which curiously looks almost exactly like a spikey version of the famous Death Star from the Star Wars series. This planet (it seems she was a myuumon) as one that emphasized order and efficiency, with an emphasis on results above all else. She had a very close friend in her childhood named Astrael as well, and in fact when we are introduced to the two of them they are spending their free time together they are holding hands, skipping through the woods and singing in the style of a Disney movie (not quite sure what to think of that one).

Long story short, during one of their frequent and difficult exams that served to weed the weak away from the strong (this time around it was a physical exam of climbing an incredibly steep thorn covered cliff in the rain) Astrael betrays Victorious shortly after Victorious herself and saved Astrael from almost guaranteed failure. Understandably this cuts Victorious to the core – and even when so internally weakened she does not die from her fall. 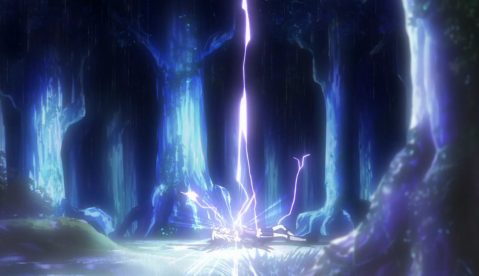 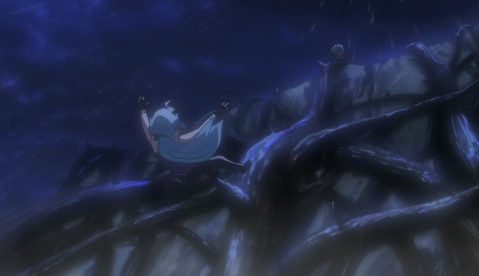 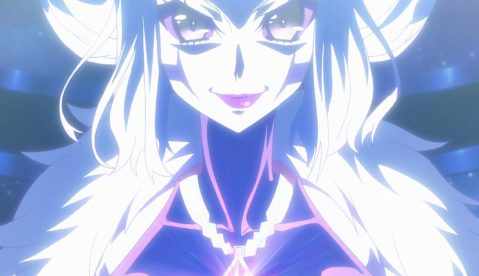 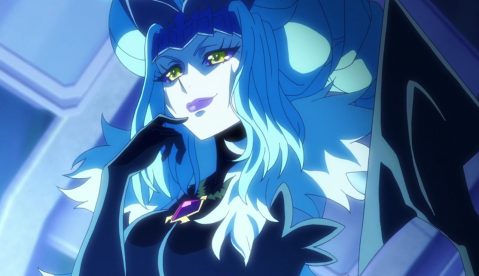 It was also what served as the catalyst for Victorious to first become infused with dark energy, an infusion curiously followed shortly after by a lightning strike that hits her right in the melodisian stone, yes, but also fills her with incredible raw energy fueled by her hatred and anger. She confronts Astrael immediately afterward right at the top of the cliff proper and terrifies the latter so much she falls down the cliff – possibly to her death. And thus the Queen of Darkness was born. Going back to Astrael … even if she did not die physically from the fall from such a great height I would not be surprised if she were horrified by watching Victorious’ rise to power and feeling cut to the core for what she did.

It is interesting when looking back on history how sometimes one action towards another person can sometimes affect the futures of even millions, either to the good or the bad. This would definitely be a case of the bad, and if Astrael is still alive (if it were me I would totally live in hiding) her conscience must be tormenting her, even if, perhaps, it were only a moment of temporary weakness. If she IS still alive I wouldn’t mind seeing a moment of reconciliation with Victorious … in fact that may be where Ninjinriot is – off searching Ordinis (or some other planet – it would be surreal if Astrael were on Sound Planet or Pyururu) to bring Astrael back to confront the Queen of Darkness. 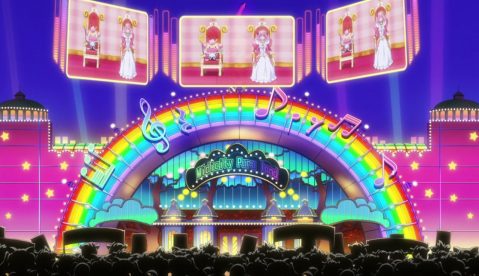 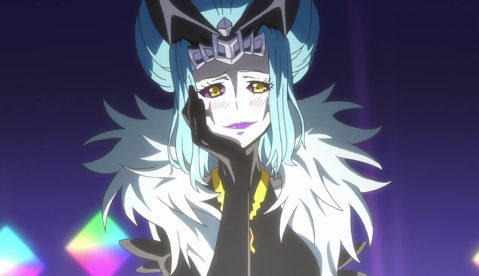 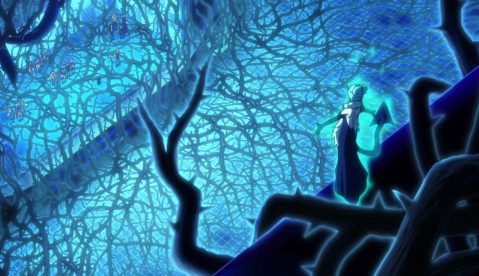 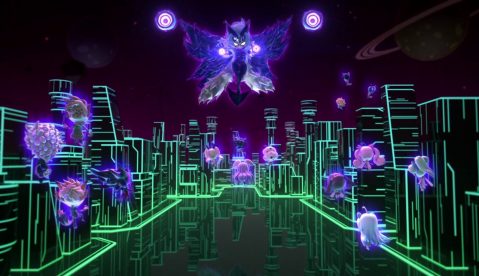 Cming back to the main narrative though, while the various bands work together to write a “grand song” with which to fight back against the Queen of Darkness the new theme park Pyuru land opens (having been liberally funded by Moa’s father) and the opening concert in celebration is where Victorious has chosen to “eat the planet”. Her appearance only reaffirms the fact that she is one extremely powerful opponent – and while President Maple’s secretly developed combat mecha to fight Victorious may be all well and good … erm … lets just say that I do not have a lot of hope in its abilities and hope that Tsurezurenaru Ayatsuri Mugenan show up with the Melodisian Almaz as soon as possible (it seems they may have gotten a lift from the members of Gaugastrikes on their way down the mountain with the Almaz).

At the end of the episode itself all I could find myself wishing is for Cyan to do whatever version of Nanoha’s Starlight Breaker she might have in Sound World in her angel winged white gothloli form (will we get to see it again?) and defeat the Queen of Darkness with the help of the Almaz. In some ways I have been waiting for that moment the entire season, but I gotta admit that in retrospect even though a few moments felt a little rushed (perhaps one more ep might have helped to make the story flow better overall) the series has thus far delivered very nicely indeed. Looking forward to the finale next week!