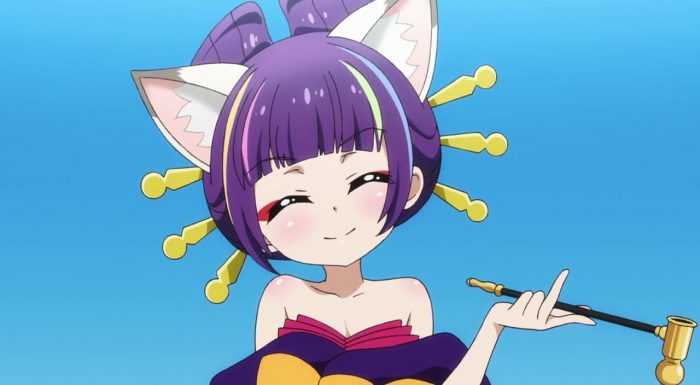 Another post with a double episode review here, and curiously once again it seems very fitting considering the essential common content of them both. Not that it in any way “excuses” my laxness in keeping up with the series of late, mind you, but it has curiously somehow “worked out”. Even so, with everything working out (at least in my mind! XD ) there have been some curious elements to the series popping up – very much unexpected, and I am at the present moment unsure if they will harmonize together as a “complete whole” at the end of the season. At the moment the pace seems to have gotten a bit “rushed” and even leaning a bit to what feels as a sort of “over-simplification”. 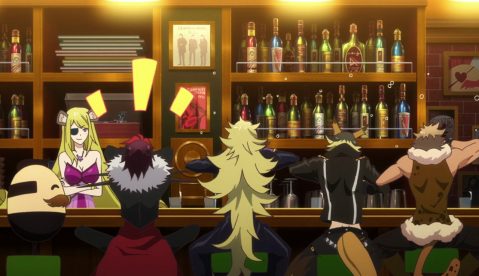 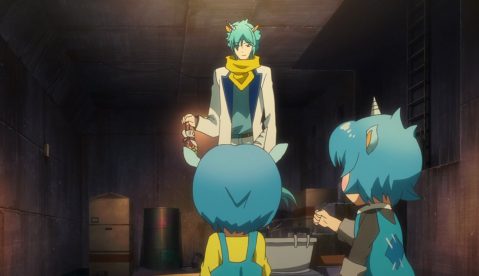 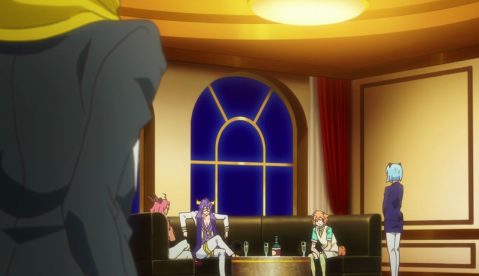 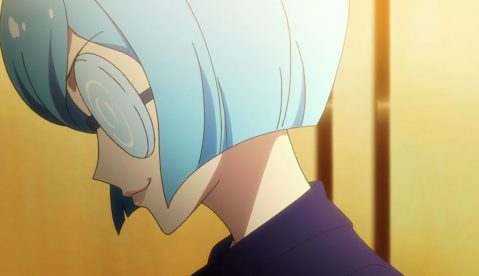 The crux of episodes eight and nine were the “band battles” of ShingancrimsonZ with Arcareafact and Plasmagica with BudVirginLogic – in other words, with two of Banded Rocking Records bands with two  other record labels; Judas and Unicorn Records – and is Unicorn as a company still in operation, by the way? To summarize both of the battles with a sweeping motion, “the good guys won”, yes, but the details were different. With the “boy band battle” after Arcareafact lost Titan finally was able to out himself to his band members and the rest of Arcareafact escaped from under the influence of the manager whose eyes were glowing with the evil red energy and who disappeared afterwards, even cleaning out the band’s sizeable bank account. I wonder if we will see her again? Her VA reminded me a LOT of the VA for the Queen of Darkness herself (Sawashiro Miyuki) in episode 1 for some reason. Hmm…. 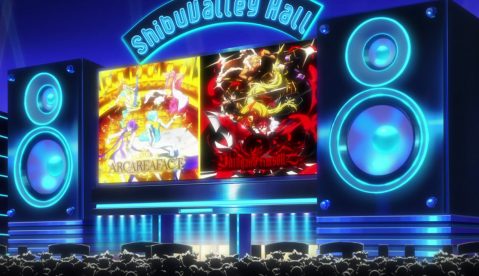 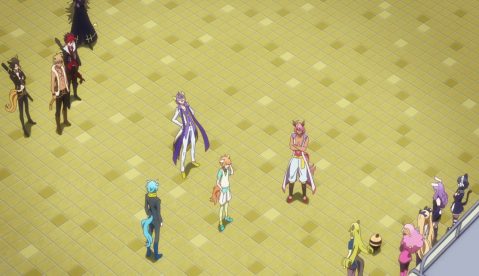 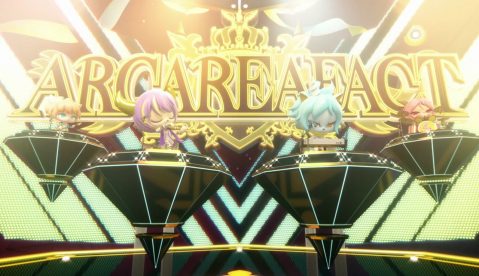 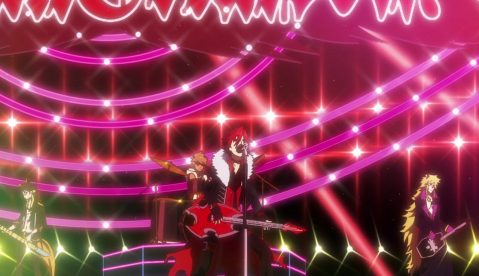 The girl band battle was different, and part of what was different was expressed (for me, maybe not in other viewers eyes) was that it became clearer that Dagger seemed to actually be the moving force behind poisoning the lead singer of BudVirginLogic, and doing so in a somewhat similar manner as Arcareafact’s new manager was doing to them. To the minds of the other inhabitants of Sound World Ailane is somehow repeatedly mistaken to be the Queen of Darkness who is bringing destruction to the planet – even Rosie from Criticrista, who finally shares her suspicions of who the members of BudVirginLogic are with her bandmates and then Plasmagica, makes this mistake. But it seems the Queen is using Dagger who in turn is using BudVirginLogic. In other words, Dagger himself appears to be the one who is directly getting the instructions, not Ailane, just as (perhaps) the new manager of Arcareafact was the one pulling the strings behind the scenes with them. 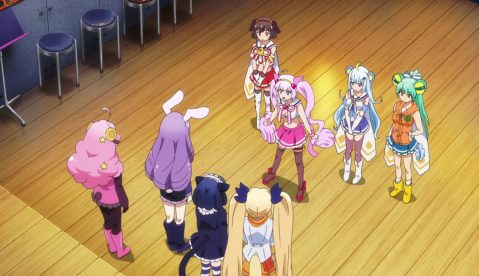 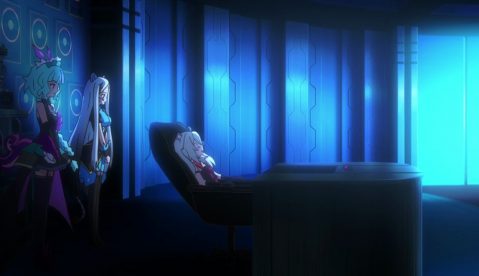 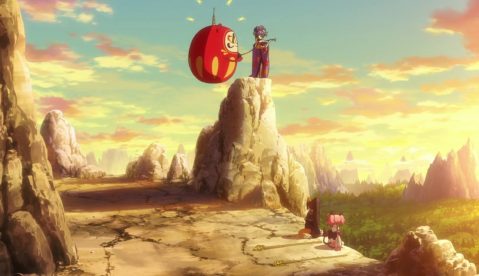 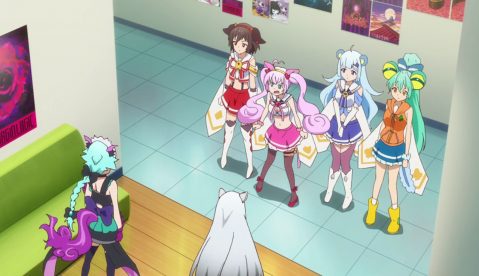 If one were to take a common theme with both of the band battles, though, it was that the “pure passion” of the BRR bands’ music provided a clear contrast to the music of their opponents, and in doing so the pre-existing elements already existing in the bands themselves that had NOT fully been consumed by the dark energy (Titan in Arcareafact and the other two members of BudVirginLogic – one of which turned out to be an android) sort of “renewed” and catalysted the cleansing process of all the members of the traces of dark energy present amongst them. Which was an interesting way to go about it. But even with this similar pattern taking place there was an odd feeling to me that the battles themselves were somehow a little “rushed” and a little “too easy”. 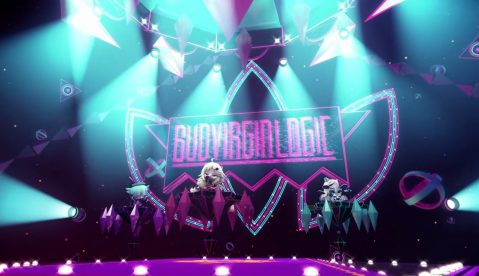 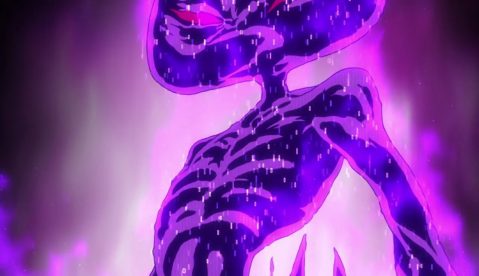 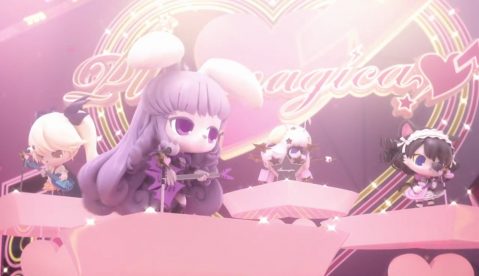 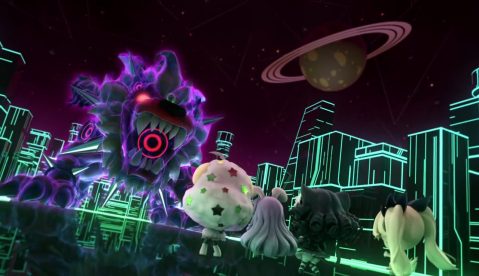 Of course by no means is this all that was going on! Darudayu and the other members of Tsurezurenaru Ayatsuri Mugenan are steadily climbing up the mountain on (or in?) which the Melodisian Almaz can be found, and on receiving what appeared to be a rather concerned phone call from Grateful King they have quickened their pace. Also, if that were not enough, at the end of the girls band battle before the decision could even be given Dagger pounced on the newly cleansed members of BudVirginLogic and transformed them by force into a dark monster, a ‘la the same pattern that Criticrista seemed to have suffered in season one. The members of Plasmagica have found themselves yanked into that “space” where dark monsters attack people – it appears things are about to get serious. However, with only three episodes left and the real Queen not showing up nor the Melodisian Almaz being retrieved … well, it’s no big surprise! XD