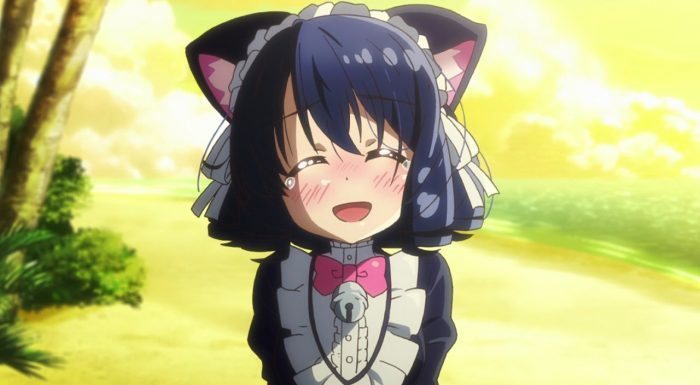 In some ways the crazy schedule I have been in of late contributing to my dropping the ball on this wonderful series and having to come out with a two episode post may in retrospect be kinda helpful in some ways. Believe me it certainly was not planned to be like that! In any event episodes 06 and 07 focus primarily on ShingancrimsonZ and Plasmagica both getting ready and preparing for their upcoming band battles and facing different issues to be sure, but coming to a very similar conclusion – essentially that for a music band one of the most important aspects that make them perform well together is a conscious effort at unanimity. This is easier to see in some ways in Cyan’s struggle more than it is with the struggle of the members of ShingancrimsonZ trying to somehow enter a bit more into Rom’s past struggles, but the results of both bands were obviously ones that needed to be addressed and that will help make them stronger and perform better on the whole, I think. 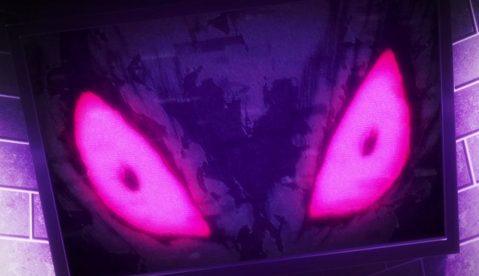 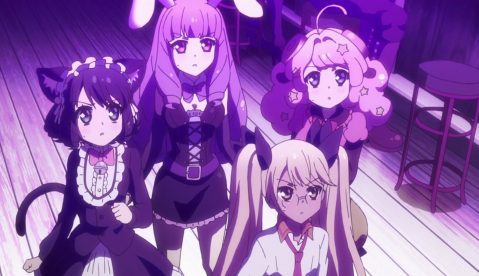 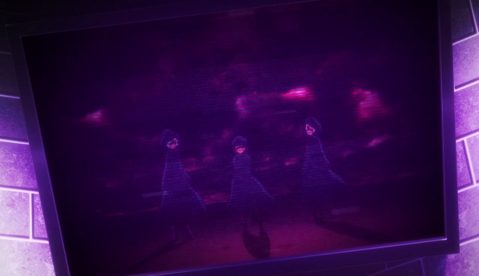 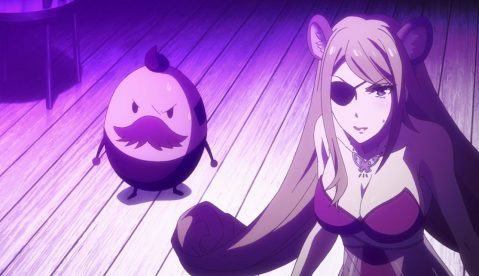 Episode 05 closed with Dagger popping up on the tv screen of Angelica Cafe (that guy sure knows how to make use of electronic devices)  and greeting them. The beginning of this episode reveals that it was not just a gloating and intimidating tactic Dagger was involved in when he showed up like that, it was a direct challenge to Plasmagica by pitting the new Unicorn Records band BudVirginLogic against them. Of course, none of the other members of Banded Rockin Records have any idea who they actually are in the larger picture of things (where is NinjinRiot when you need them?), but Plasmagica does plan to accept. 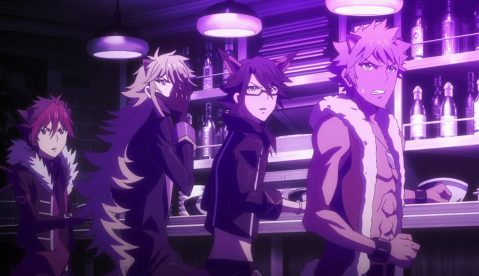 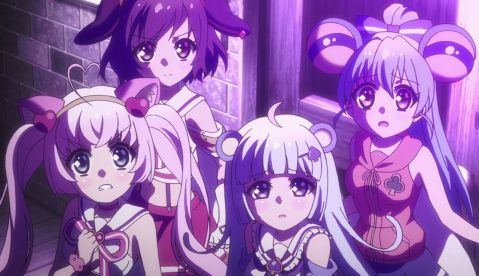 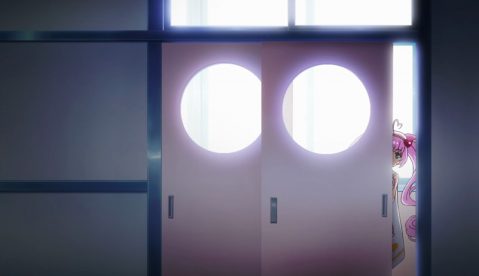 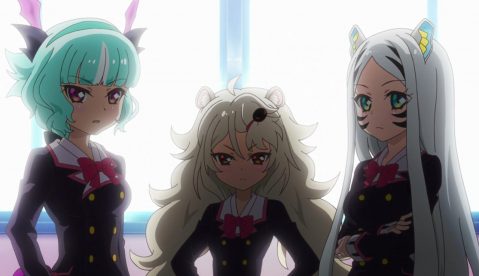 While Dagger is gloating and carrying on in true “bad guy” fashion Rosia and Criticrista visit the cafe (bad timing girls!) just in time to be greeted by Dagger and freak them out. Unexpectedly though, Rosia has a dim memory of having seen the face of someone similar to that of one of the hooded, robe-wearing members of BudVirginLogic before, and after the scene at the Cafe is over with she decides to do a little investigation on her own at the school the next day. Well, if you remember from previous episodes, when Rosia saw Ailane the latter not only also wound up seeing her, but had probably been briefed about Criticrista from Dagger. So … when Rosia decides to peek into the music room again to confirm her guess all three members of BudVirginLogic confront her about the fact in an aggressive and intimidating manner. Kudos to Rosia for fighting back and showing some spunk! 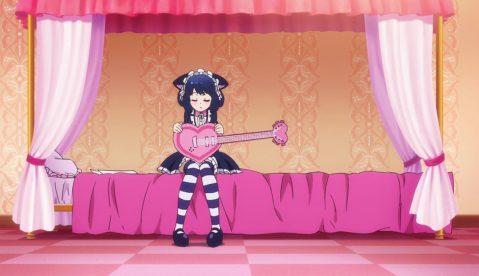 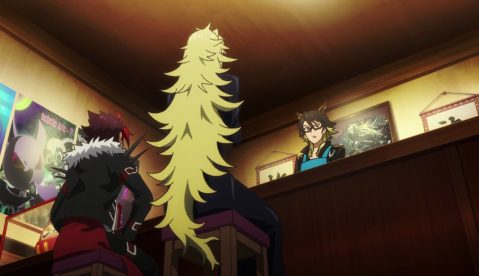 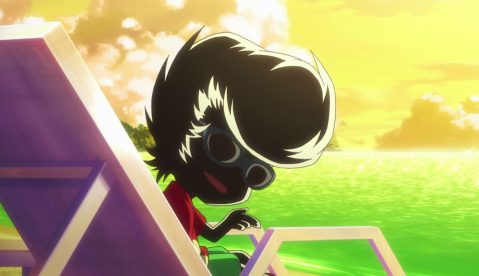 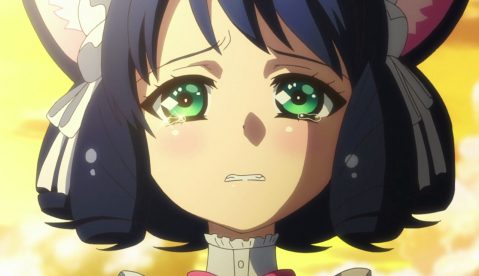 It is from there on out that the main theme of the two episodes begins to rear its head, and it begins with Cyan. Cyan is experiencing writer’s block, and seems to have worked herself into a corner once again – for those who remember, in the first episode she also was stuck in writing a song for her “real world” band as well before she was whisked back to Sound World. Well, it has happened again, but this time Cyan has the extra added weight of being tasked with “saving the world” from the Queen of Darkness. To put it mildly this extra weight makes her freak out a bit more. After being repeatedly scorched by the extremely supportive and kind encouragements and expectations of the other members of the band she finally realizes she needs help, and makes her way to another good friend in that world who has helped her on her previous trip to Sound World: Grateful King. 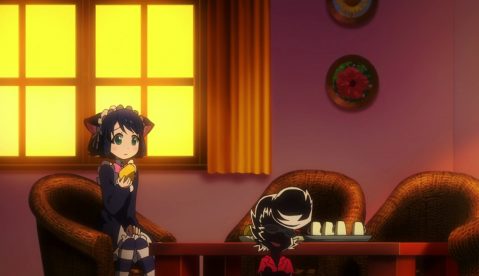 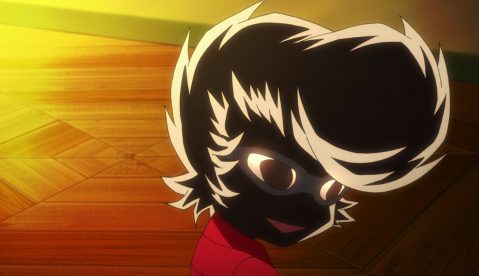 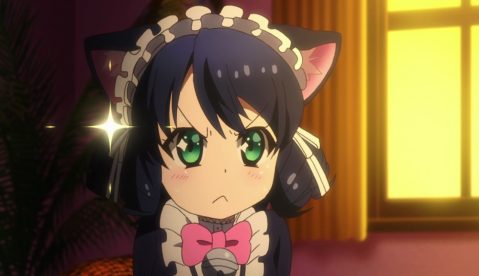 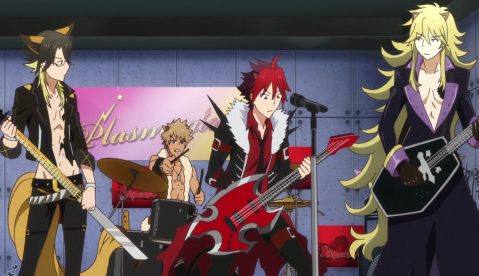 It was kinda interesting to see how Grateful King handled the situation – it was not as a “sempai” or any such thing, it was as an experienced mentor, who had a really good idea of what was going on and how to deal with the situation in a tough but loving way. Cyan obviously has quite a bit of trust and respect for him, yes, but she also knows that he is not mean spirited or prone to act from nastiness or ego or whatever – that he wishes the best for her. Such mutual respect and trust on both sides for the other really is a key element that really makes mentorship in most anything really work, and work in a long time, long lasting effect, often for both members involved. For whatever reason it had not occurred to me that King could be a mentor to Cyan in her struggle, but in retrospect it was a perfect and obvious fit. (Hindsight is 20/20 and all that, I guess.) 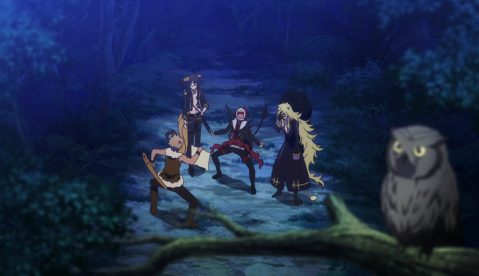 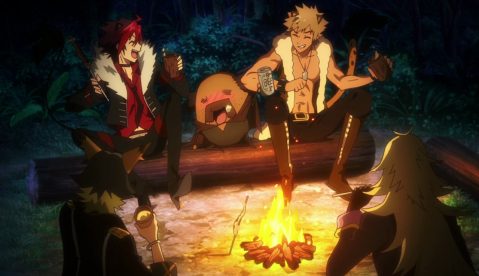 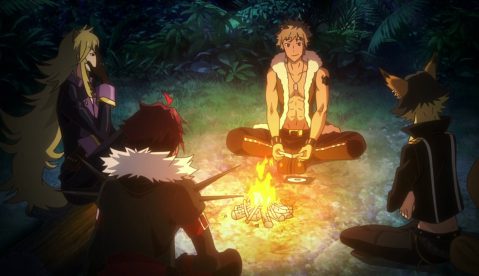 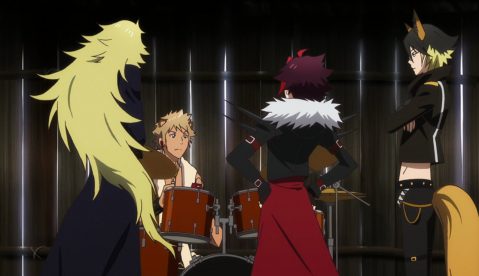 The ShingancrimsonZ story is a bit similar, as previously mentioned, and while they benefitted from some “guy bonding” – a little of that never hurt – more importantly they also needed to somehow assure Rom that they knew of some of what they considered to be a touchy past. I liked seeing how the somewhat awkward but good hearted gathering showed their support of Rom regarding the past, yes, (and to Rom’s credit and in a totally consistent manner with the sort of person he is he accepted their reaching out to him). However the members also put themselves out for him to encourage him and assure him that they were with him in present by giving their all to the training camp and staying up all night to compose a new song, going the “extra mile”. And unsurprisingly Rom was touched by that as well. 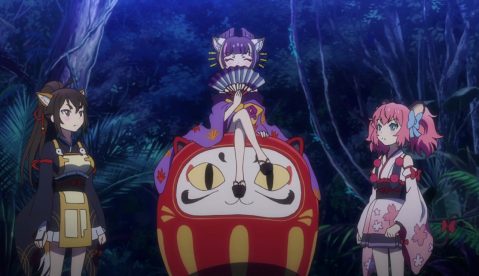 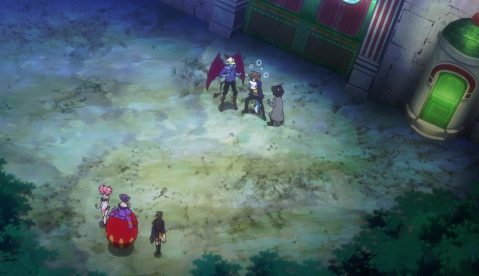 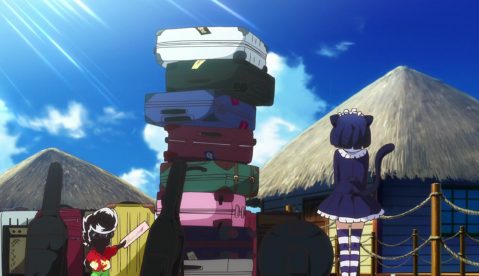 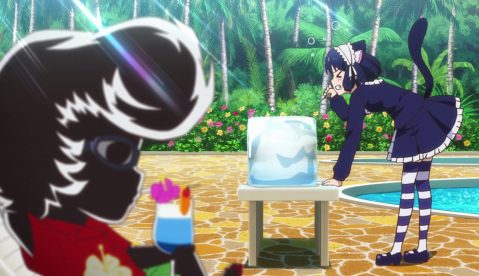 Before episode 7 arrives at the conclusion of Cyan and Plasmagica’s story, though, a very interesting side story in reintroduced. In episode 4 Darudayu and the other members of Tsurezurenaru Ayatsuri Mugenan declared to King that they were heading off in search of the Melodisian Almaz. Well they show up in this episode at the gates to the mountain where it is, which is being guarded as a part time job by yet aNOTHer band (their name is Gaugastrikes for the record) as a part time job. Apparently the requirement is that they cannot grant unauthorized entry to the path to the mountain to just anyone, but also can only let “those who are worthy” pass through. Darudayu (in her trademark suggestive, queenly manner with that classic sly grin on her face) asks if they think the members of Tsurezurenaru Ayatsuri Mugenan are worthy, and needless to say poor Gaugastrikes never stood a chance. XD (I wonder if we will get to see more of them later or if they will receive a similar treatment as Uwasanopetals has thus far?) 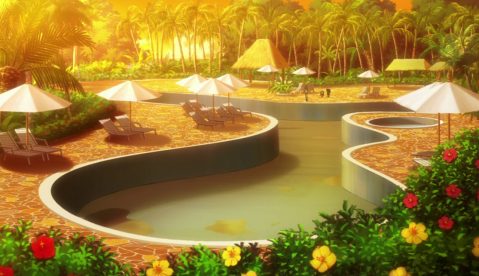 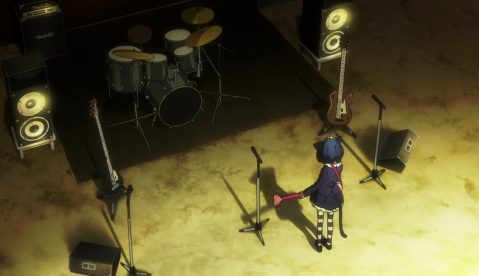 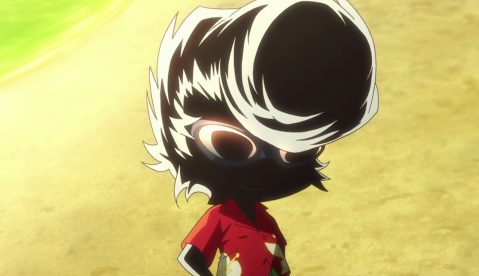 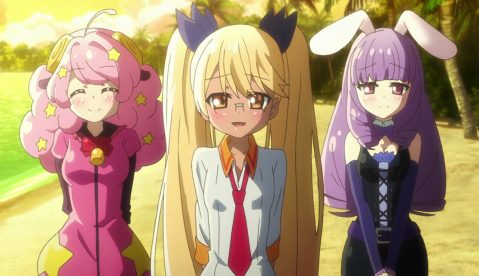 Essentially the episode ends with Cyan realizing that she was trying to do too many things by herself and making it heavier and more difficult by not sharing her troubles and worries with her bandmates. It really is a very common lesson, but all of us have our blind spots, and for the gentle hearted Cyan this was definitely one of them. Thankfully Grateful King was able to steer her in the right direction (although for a split second there I wondered if Cyan would do something like a ninja clone technique or something to overcome the final test) and help the members of Plasmagica become stronger as a whole in preparation for their upcoming challenge against BudVirginLogic.

Gotta admit it – this series has just continued being very engaging, yes, but also very much itself, and in a consistent and reliable manner. Bones continues to create enjoyable series (they have been at it all year!) and I am more than grateful. Anyway – next episode looks like it is going to focus on a rematch between ShingancrimsonZ and a creepier and creepier looking Arcarefact. Am hopeful that more will come up regarding Titan’s situation … but we will see!