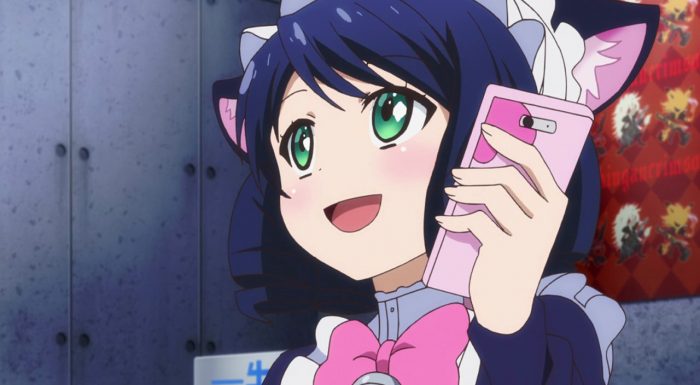 This episode was … well, I don’t think one could necessarily call it “the calm before the storm”, but perhaps the far off rumblings of thunder foreboding the storm. Curiously the main focus of the episode was the band Arcareafact. What Criticrista was for Plasmagica last season Arcareafact is becoming to ShingancrimsonZ this season. (And actually there are a few more similarities than I initially expected). But with Arcareafact in the spotlight, the main focus of the episode band wise from BRR records was ShingancrimsonZ. Of course we got our dose of Cyan and the Plasmagica girls as well as a brief focus on Dagger and the ladies from BudVirginLogic, but it was definitely the boys that took center stage. 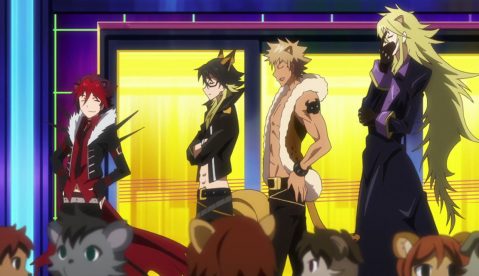 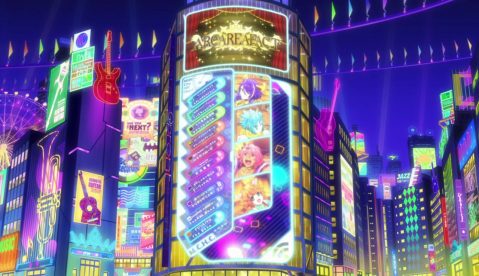 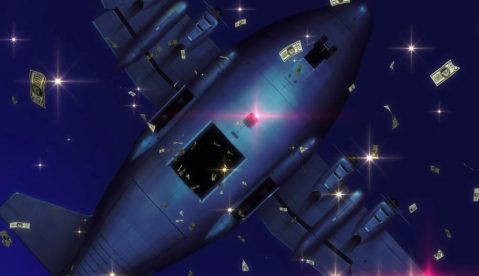 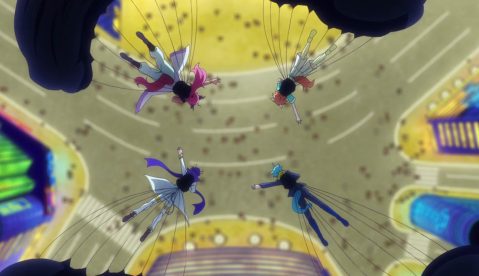 When it comes down to it up to this episode (and for much of it as well) the members of Arcareafact really come across as arrogant jerks with way too much time on their hands. (The worst for me personally is the drummer … gah … I can’t tell you how much he gets on my nerves! XD ) Although to be fair, even with their arrogance and egotism they are not unblessed with intellectual or musical talents. Those they have in spades, and so much so (assuming that they did not pay people off) that they vaulted into the number one spot in Midi City amongst bands, overtaking the then touring Trichronika’s long held seat (if you remember last episode they were in space in between planets). Every member of ShingancrimsonZ is surprised to discover this overtaking, and Rom is even mutters disappoint in Shu-zo under his breath. 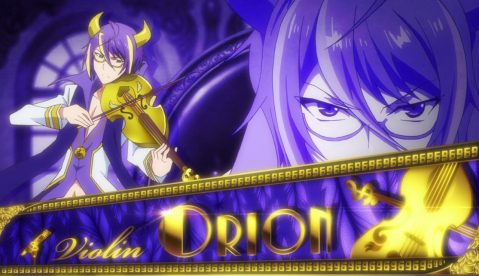 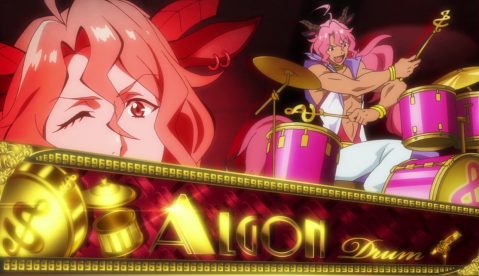 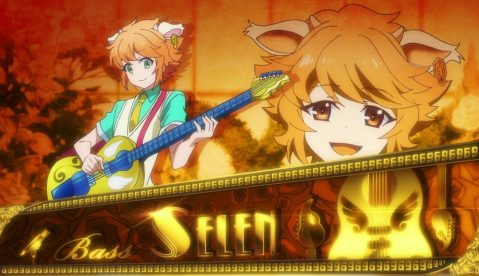 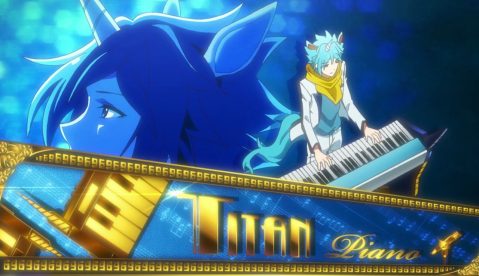 For reasons I still cannot really fathom, though, Orion (the violinist of Arcareafact) has taken some kind of interest in ShingancrimsonZ and decides to go out of his way to try and discourage and destroy the band for … some reason or other. To achieve this whim birthed from idleness he decides to stage an elaborate grand entrance by parachuting from a cargo plane dropping money “on the masses” and challenging Rom and the others in public. Whatever else Rom’s strengths or weaknesses are, he has honesty and integrity to the brim (perhaps this is what is irritating Orion unconsciously and he either wants to stamp out the source of this irritation and/or is actually envious of someone possessing something he craves but does not have and cannot be purchased with money?), and Rom and the band gladly accept their challenge to a band duel. 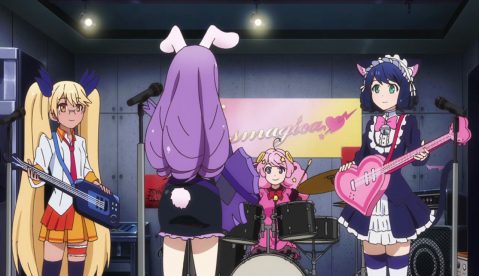 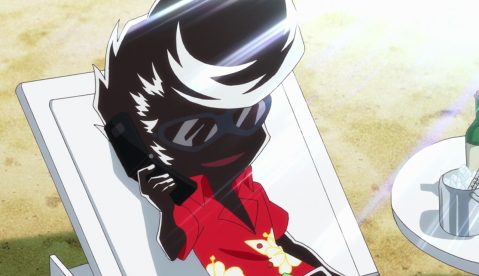 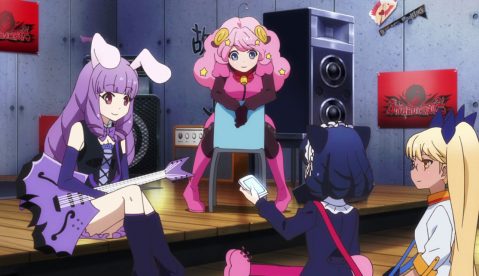 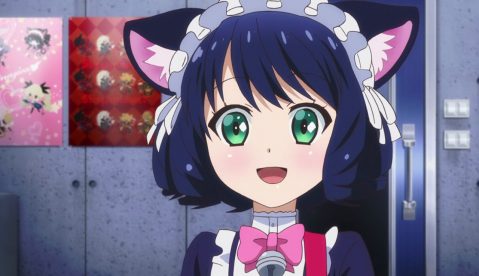 In the short time period in between the band duel we get glimpses of Cyan and Plasmagica busy at work on a new song, and while brainstorming and bubbling with inspiration Grateful King (still relaxing at the beach) calls Cyan out of the blue, much to her delight, and encourages her (and them – she puts him on speaker phone so everyone can hear) in the upcoming batlles both he and they are preparing themselves for. Interestingly he does not mention anything about the Melodisian Almaz, but it is probably just as well – there probably exists the equivalent of phone tapping in Midi City as well, and I bet Dagger could utilize it. Anyway, the inspiration for their new song is to do something very unlike their previous style of performance, and Cyan volunteers to try and compose it. When I heard this the immediate thing that came to mind was the OP for this season! (I hope so – I enjoy it quite a bit.) 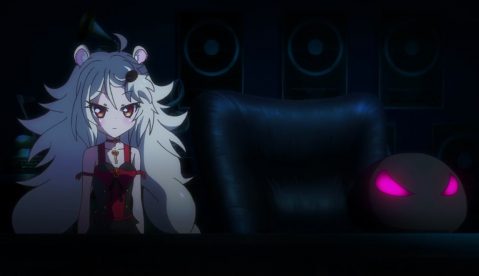 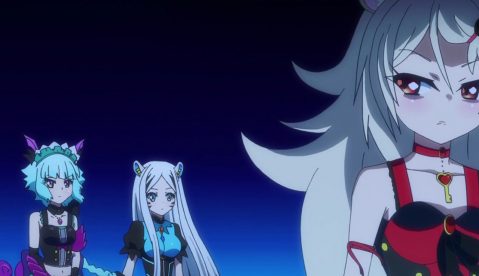 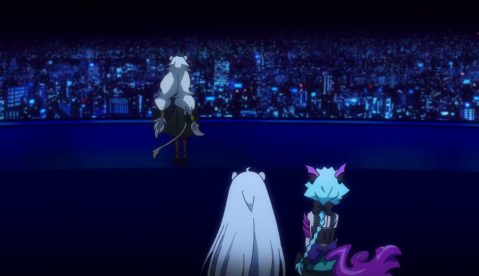 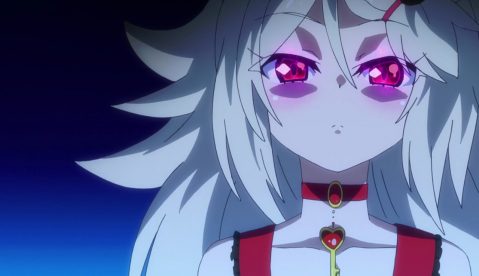 The second side trip before the battle of the boys’ bands takes place in the headquarters of Unicorn music studios. A seething and vengeful jellyfish (i.e. Dagger) is watching footage of BudVirginLogic performing and gloating about how it will soon be time when his powers are back up to par … I guess he is still in process of recovering somehow … and how he will avenge his humiliation on Plasmagica, etc., etc. Ailene is present and looking on, and later leaves Dagger to his devices and decides to go to the roof and gaze at the city she plans to take part in annihilating. Her bandmates visit her to express their concern over Dagger, but it is pretty clear that the only thing Ailene is really interested is other people’s suffering…. Errr, yeah. An unpleasant personality to be sure. -_- 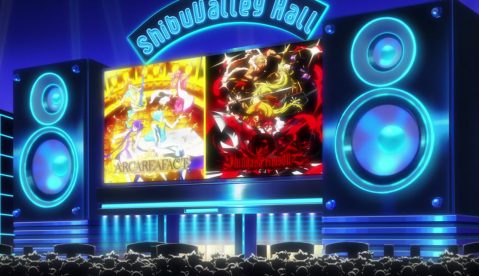 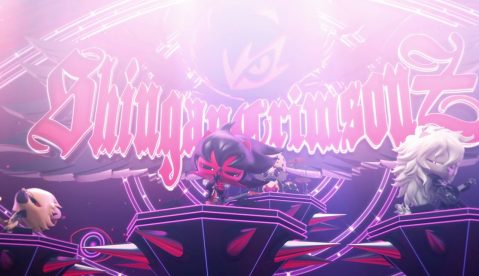 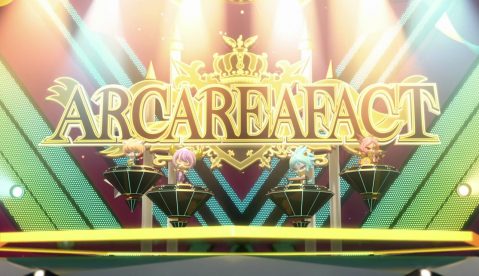 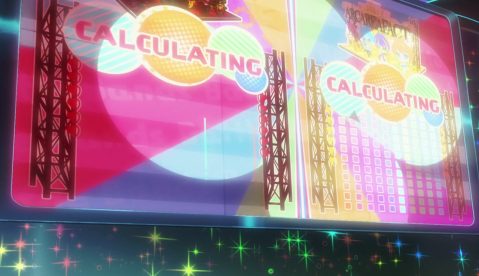 When the battle of the boys’ bands finally starts everything goes smoothly in terms of performances for both groups, but we soon see that Arcareafact arranged for their spectacles-wearing manager to do something to the polls and the voting proper while they were being tallied … in other words, she used magic (curiously similar in style to Ailene’s eyes glowing) to hack the computers tallying all the votes, and thus made it so that Arcareafact won by an incredible landslide, with ShingancrimsonZ apparently getting not a single vote. The members of BRR across the bard are really surprised at this, and later investigations by Retoree (in hacker mode) show the manipulation of the data, but Rom once again stands with his head tall and noble and continues onward, further dedicating himself and inspiring the others to improve themselves even more. 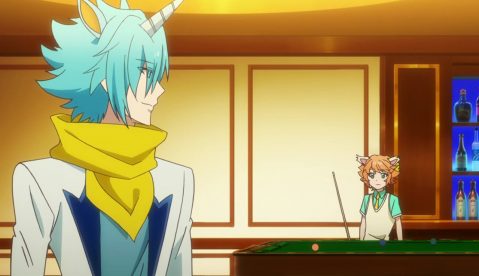 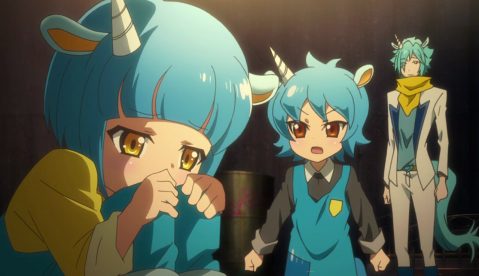 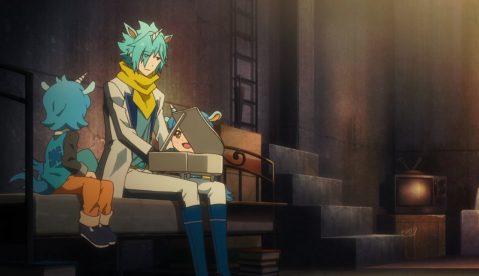 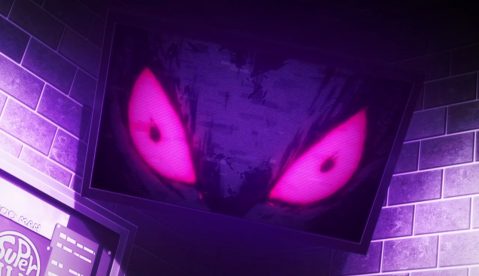 It is here that an unexpected twist takes place in the narrative. We discover that Titan, the pianist lead singer of Arcareafact, is actually from an apparently recently impoverished formally wealthy family – so impoverished that he supports (apparently in secret?) his two younger brothers, who live in a very poor place in an abandoned sewer. And more than that, Titan is actually a very gentle hearted person who loves and cares for his younger brothers very much. I had to wonder how much of this the other members knew, if any of them, and what they thought of it? No doubt that will show up in future episodes. This episode, however, ends with Dagger taking over the tv of the Cafe Angelica when Plasmagica and ShingancrimsonZ are there (I wonder where Criticrista was?) and essentially throwing down the gauntlet and threatening them with his imminent arrival. Hmm….

From what little we were able to see of the next episode from the preview, it appears that it will partly focus on Cyan experiencing writer’s block? Also it looks like Trichronika might hear about their being dethroned. Also … something or other happens to the members of ShingancrimsonZ – it looked like they were beside themselves with wrath. XD Well … am looking forward to it in any event. As many may have noticed this post is very late this week – unfortunately I badly threw out my back, and in between barely gimping around for half days of work at best the rest has been … filled with very limited movement, to put it mildly. Things seem to be getting better, and hopefully next week I will be able to make the episode post much more quickly! See you all then! ^^