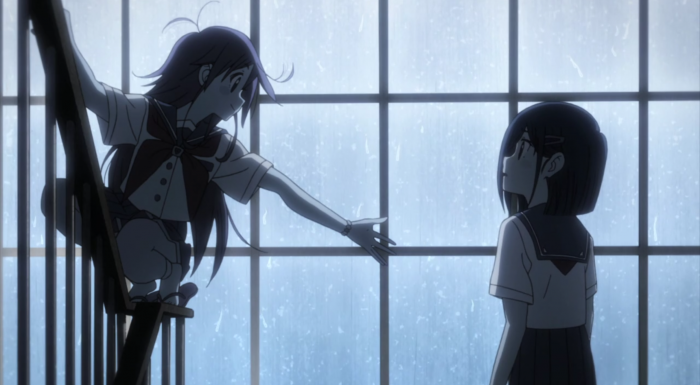 Cocona and Papika return to Pure Illusion only to find themselves smack-dab in the middle of a scary movie, trapped in an all-girls boarding school that repeats the same 24-hour loop each day. While the “Echo” in the title probably refers more to the way this school is a warped reflection of their own, the episode also strongly echoes Ikuhara’s Yurikuma Arashi, combining horror elements with “Class S” romance tropes to craft a genuinely creepy and undeniably queer adventure for our two explorers. Or, as a Twitter friend put it: The Gang Goes to Yuri Hell.

There are at least two layers to every Flip Flappers episode, which makes it both a fun and accessible story for casual viewers as well as a sprawling playground of speculation and analysis for English major nerds like yours truly. The top layer of “Pure Echo” is a spooky story about temptation, trust, and teamwork, as Cocona and Papika fight to escape the boarding school. Both girls (Papika especially) find themselves pulled into the relaxing, daily routine of life at the school, gradually forgetting about their mission. It’s up to Yayaka to remind Cocona why she’s there, and up to Cocona to keep Papika focused long enough for them to escape. 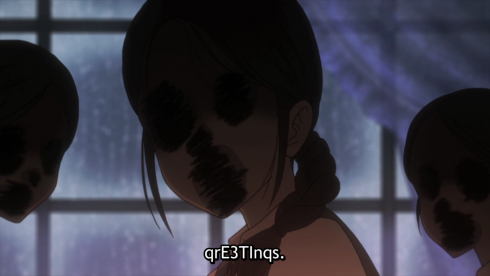 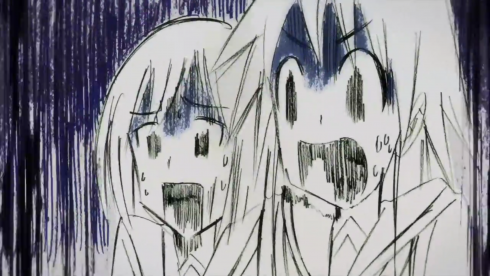 All three girls are integral to “defeating” this world, using their strengths (Papika’s instincts, Cocona’s focus, Yayaka’s cool-headed skill) to escape. Cocona and Papika seem to trust each other implicitly now, which makes it easier for them to get sucked into this new world but also makes them formidable once they decide to escape. They are also fiercely loyal, a stark contrast to Yayaka’s own teammates, who don’t hesitate to leave her behind when she gets captured by the clinging hands.

That loyalty and compassion extends to Yayaka–Papika rescues both her and Cocona without hesitation–and rubs off on her, as she drags the girls through her own portal back into the real world. In the end, the two teams can’t come to an understanding and we’re no closer to finding out the true nature of Pure Illusion or the fragments/amorphous, but our two girls have tightened their bond, Cocona has strengthened her resolve to work with Papika, and Yayaka may be questioning the callous methods of her own organization. They’re small but important steps forward in terms of both plot and character development and set the stage for future conflicts going forward. 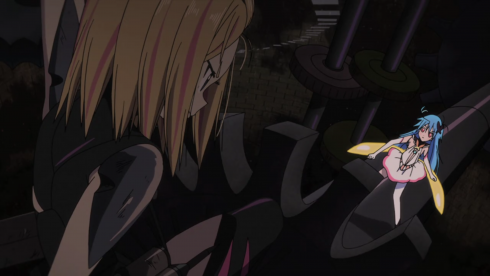 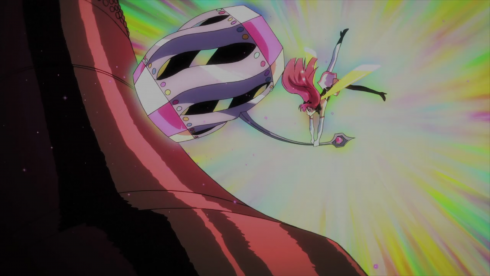 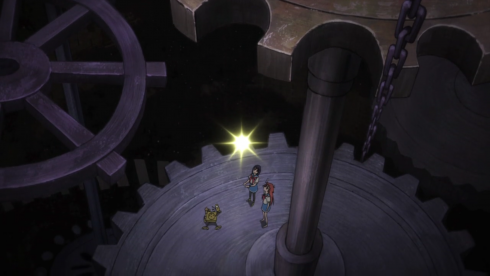 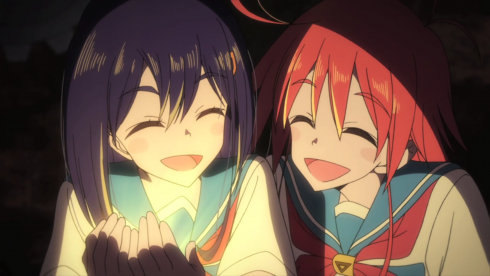 All of which is solid storytelling and great fun, especially coupled with the visual feast of warped architecture, canted angles, scratched-out faces, and rapid, jerky motions. But there’s another layer built under that one, and like with all of Flip Flappers‘s stories, it’s about adolescence, awakening sexuality–and, as is becoming clearer with each passing week, an honest exploration of the feelings both emotional and physical developing between Cocona and Papika.

While some aspects of this are obvious–holding hands, sharing a bed, sucking on each other’s fingers for heaven’s sake–a lot of it is built into the imagery and an assumption that the audience will know about “S” relationships. In Japan, they almost certainly would, since they’ve been a part of the culture for most of a century, but you might not, so: In brief, “Class S” refers to crushes developing between middle or high school girls that are generally considered to be (1) more emotional than sexual, and (2) a “phase” the girls will grow out of, eventually going on to marry men.

Over time, “S” relationships depicted in fiction have developed their own set of tropes, such as a focus on refined femininity (embroidery, tea and sweets, conservative school uniforms) and romances that can be vaguely sexual but rarely move beyond subtext and innuendo. The lily (yuri) flower has become a symbol of these relationships, hence why they’re plastered all over Pure Illusion this week. Simply put, Pure Illusion has all the trappings of a stereotypical “S” boarding school, but instead of being a rose-colored haven, it’s a dark & stormy nightmare. 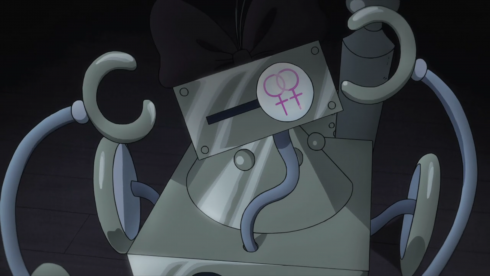 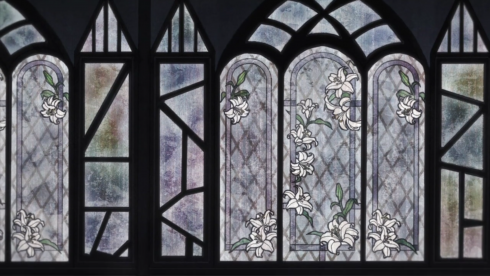 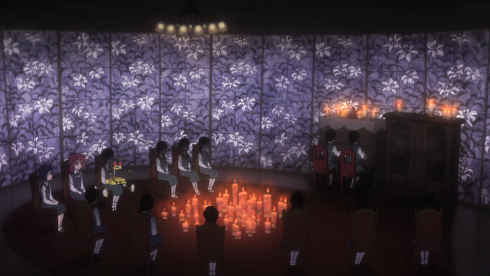 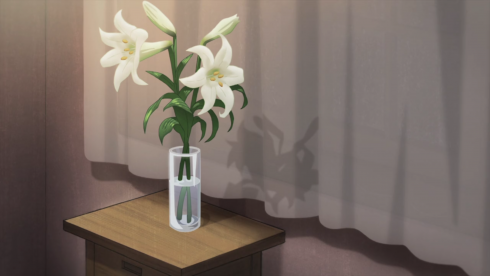 Depending on where Flip Flappers takes its story, my reading of this episode could change dramatically, but here’s where I am right now: I think it’s bloody brilliant, an understanding of the appeal of “S” relationships but also a rejection of the heteronormative assumptions inherent in them. As mentioned before, the show’s nod to Uexkull and focus on perspective makes me think Pure Illusion changes its shape to reflect our characters’ inner worlds, and what that world tells us about our cast is fascinating.

The past few weeks have seen Cocona struggle with her own repressed desires and uncertainty about Papika. After last week, the two have found balance and a solid foundation for their relationship. Pure Illusion offers them a safe space where they can explore that relationship: A welcoming, accepting school of girls who encourage them to spend time together and grow closer. There’s no world outside or even time beyond this place–no future to worry about, no society to consider. It’s easy to see why that would be appealing to them and why they fall so quickly into the rhythm of life here. 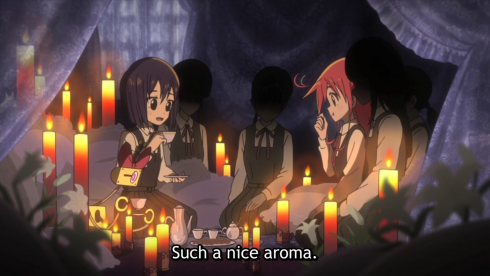 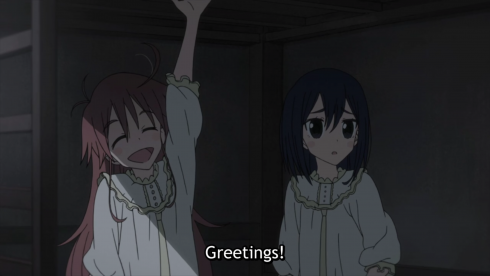 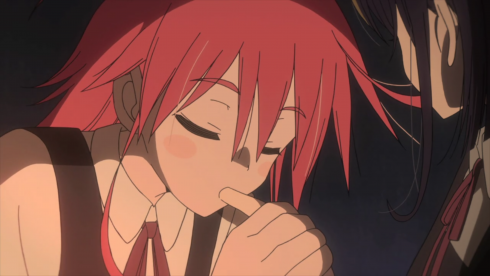 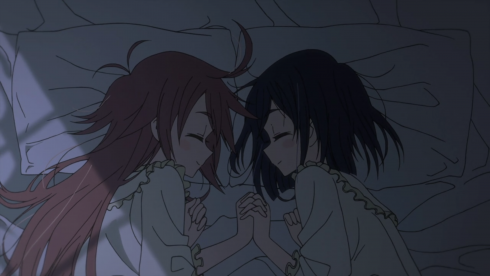 Ultimately, though, it’s an empty world, a prison of repetition and stasis. By their nature, “S” relationships don’t go anywhere. They can’t exist beyond the school and into adulthood. They can also be quite limiting, demanding a narrow definition of idealistic “femininity” and love. The girls in the school are all the same: faceless and void of individual identity, not unlike the Invisible Storm in Yurikuma Arashi. And, as Bu-chan shows, to stay there is to become one of them, to homogenize and repeat the same words and actions forever, never developing beyond an idealized schoolgirl innocence.

Adulthood is scary. So is sexuality, especially if your feelings don’t match the ones most readily accepted by society at large. But it turns out the alternative is a whole lot scarier. While it’s tempting to stay in a world of safe, chaste crushes, protected by school walls, the only way to grow both as a person and in a relationship is to step outside, force the clock to strike twelve, and move forward. 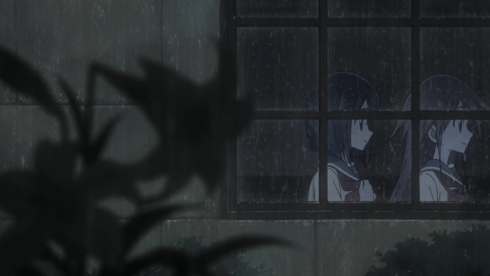 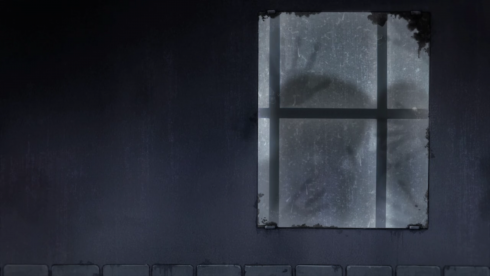 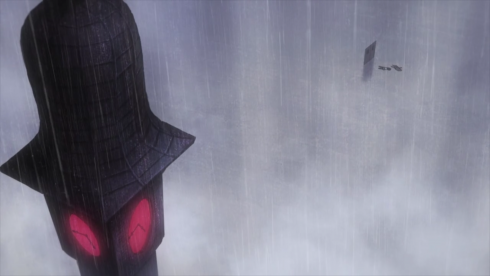 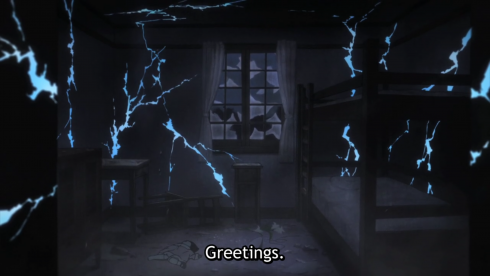 “Pure Echo” provides a kind of counterpoint to the manipulative, impulse-driven Queen of Masks in Episode 3. If she was the extreme edge of Papika’s instincts, doing whatever she wanted because it felt good, then the boarding school is the extreme edge of Cocona’s propriety, boxing herself into the culturally expected image of femininity and love. Neither is a healthy way forward for the girls, either as individuals or in their relationship, and so both must be defeated.

That Cocona rejects the boarding school faster than Papika does and is the one to force the world to break its loop says a lot about her growth as a character. She may be “afraid of failure,” as Yayaka notes, but by the end of the episode she’s at least willing to take the steps forward towards that potential failure–or, as it turns out, towards success. Cocona freely tells Yayaka that she’s not ready for what happens next. But she’s decided to travel there with Papika by her side even so, and that’s not a bad start at all.