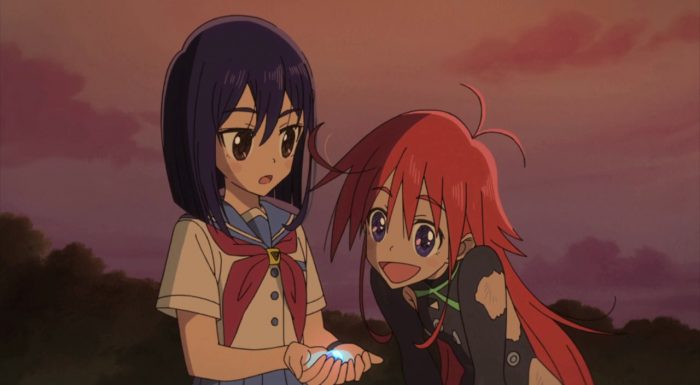 It was many months ago (in March of this year, in fact) that I first became aware of the upcoming anime Flip Flappers, and initially it was only a few images. However every once in a blue moon when I first come across an upcoming series something about it “clicks” in me on a non-rational, intuitive level and instantly pulls me in, even if I know little about it, and I begin to keep an eye on the news related to that series and look forward to it with a lot of anticipation. Flip Flappers was one such series – and perhaps the most recent one. Needless to say, the more and more I found out about this series the more I was intrigued (including the fact that it was to be an anime original story animated by Studio 3Hz – also responsible for Sora no Method and Dimension W), and with the first episode airing today I can very truthfully admit to still being intrigued, but I am also … confused, and confused in a way where I am chuckling at myself. 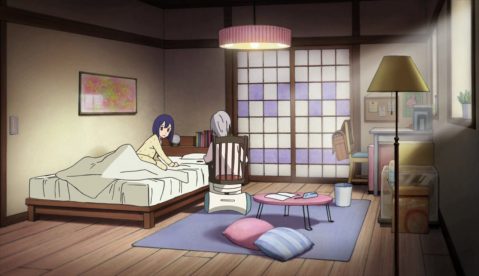 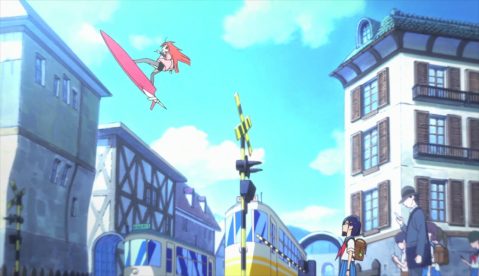 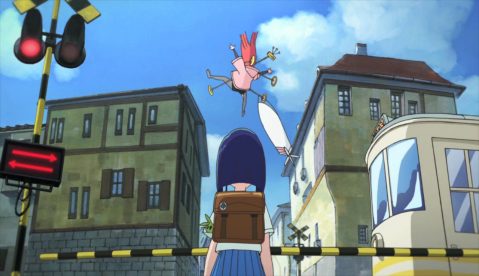 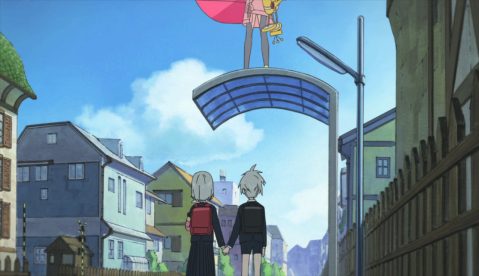 I watched the series and tried to take in what I could and after it was over I tried to put my thoughts in order … and, well, I was not quite sure what to think about all that I had just seen. Overall I had the impression that I liked it – it did a good job at conveying how the lead character, a young girl named Cocona, was sucked into … whatever it was she was sucked into – they called it “Pure Illusion” and it was something like another dimension. Another thing that came to mind that I was not quite sure (though kinda curious) about what Papika’s (the other lead character who is also a girl very close to Cocona’s age) story is. My first thought was that perhaps she was a human who was raised with venturing to and fro from this pure illusion place … thing … whatever … by a rather mysterious group of people who seem to be lead by someone named “Dr. Salt”? Papika kind of reminded me of a pearl diver who was trained from childhood to master that task and very little else, somehow….

Perhaps it would be helpful to give some official summaries of the anime series, since going into this one blind will definitely leave one all kinda of degrees of confused. Here is a combination of a few official descriptions of the series: “Cocona is a model honor student, cautious and slow to embrace new opportunities. Her bland world gets turned upside-down when she encounters Papika, a strange and lively girl who rides a flying surfboard, and her robot Boo-chan. They take her to another realm Papika calls “Pure Illusion”, a place where the snow tastes sweet and “frozen trees” roam the land. A harrowing adventure there results in Cocona manifesting powers and recovering a glowing stone coveted by a secret organization. When fates collide and they’re given the ability to transform into powerful fairy-like beings, where will the dangerous journey into “Pure Illusion” take them?“ 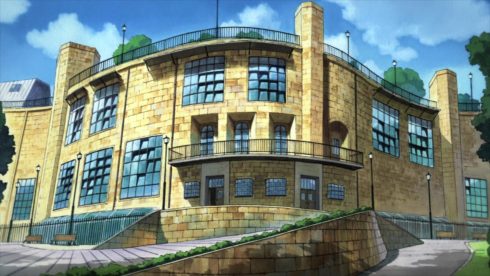 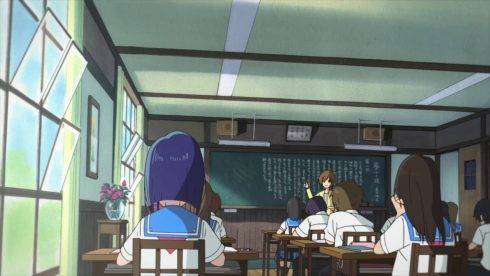 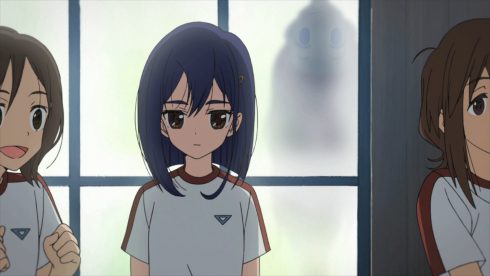 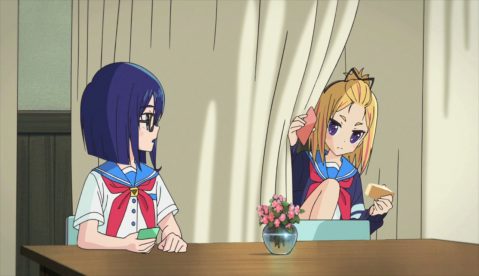 From the get go of the episode we notice a few notable things about Cocona and Papika. Interestingly, Papika can do “super powered” type things in the “real world” too, but just as curiously it seems not everyone notices her … only Cocona at first (when she sees Papika surfing through the air and tackled by something that looks like a robot for a split second before they disappear behind a train passing by in front of them) and  a mysterious pair of black clothes wearing deadpan twins – the latter also showed up in the art promos before the series aired, so they may have some important future role in the story as of yet as well. Papika notices that Cocona (and the twins, incidentally) notices her and even hears her name a minute or two later after the train passes as a fellow classmate also hurrying to school prods Cocona to hurry on.

It is while she is at school that we not only notice that Papika is tailing Cocona, but also that Cocona is unsure of … well … basically what and where she wants to go with her life. Cocona seems a bit of a loner, but at least has one friend – a young girl named Yayaka. (Interestingly the only glimpse we get of Cocona’s home situation is that she is cared for by a kind grandmother in an electric wheelchair – I wonder where her parents are and if she has any siblings?) 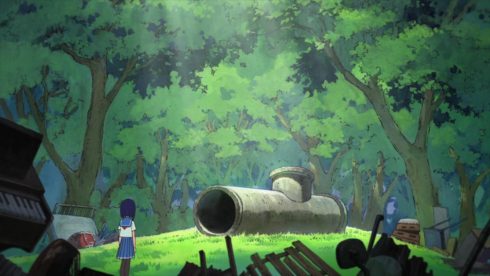 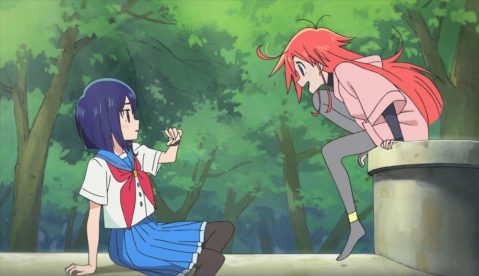 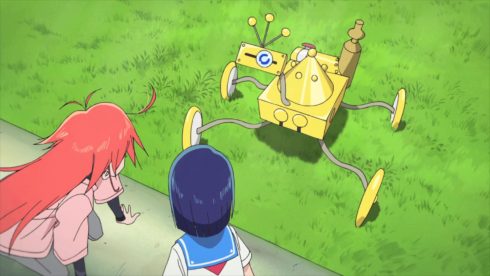 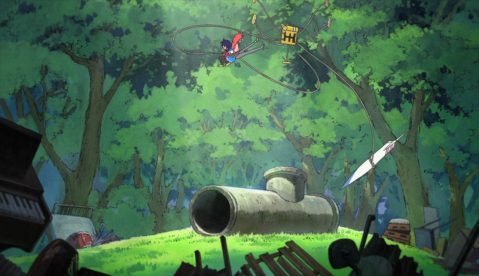 Cocona also appears to be responsible and reliable, and at least some of the teachers seem aware of this as well. At one point she goes for a walk to try and sort out her thoughts as to where to go for high school and winds up meandering into a small grove with a very large old pipe and some other junk in it. After sitting on the pipe who should pop out of it but Papika (who has very little sense of personal space, it seems) and soon the robot that tackled her mid air when Cocona first saw them (officially named TT-392, by the way) rolls in, grabs both of them and forcibly transports them to … another realm, a realm Papika names “Pure Illusion”.

The realm of Pure Illusion is … unnerving and beautiful at the same time. At first glance it seems to be a lovely, snow covered, uninhabited realm (the image of the lamp posts after they emerge from the dark area they fell into is a nice nod to the first of the Narnia books). Papika immediately zooms off to play in the snow, dragging an understandably nervous Cocona forcibly behind her, and the snow scene continues for some time. Interestingly the series seemed to strike a nice balance between Cocona’s being very concerned with what had happened, where she was and what was going on, but also being able to roll with things in the realm she finds herself in. 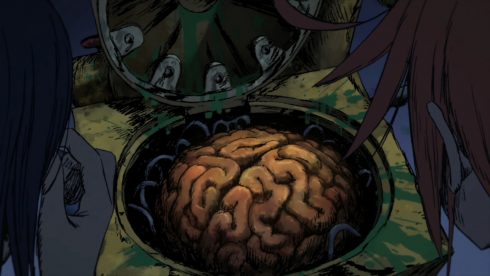 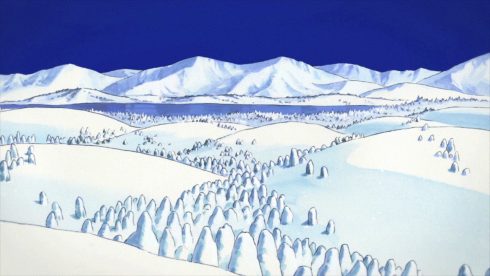 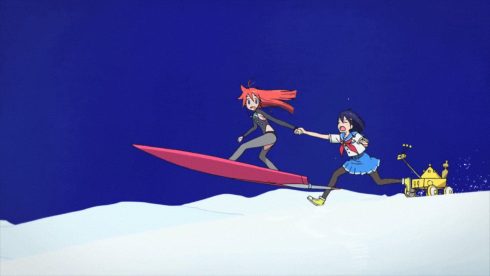 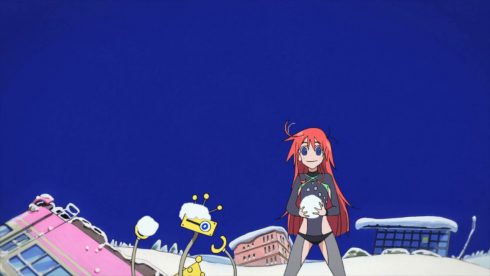 She soon finds, however, that this realm is definitely not candyland. As she and Papika begin to explore around a bit more and even head through other landscapes – plains filled with giant boulders and thick forests with very tall trees – they camp in a home made igloo for the evening only to be rudely startled by something that reminded me of the giant Om insects from the Nausicaa movie. It seems they were actually the boulders they saw while flying over the plains, and were all heading towards a giant lake or something … and the main characters happened to be in their path. When Cocona accidentally loses her glasses Papika recklessly retrieves them from the back of one of the giant boulder things just as it plunges into the lake.

It was then that things happened. Cocona panics and then suddenly begins glowing, and transforms into … something or other, gaining magical powers, and instantly saves Papika from the depths of the lake. After this the robot grabs the two of them and transports them back to the real world. While in the real world Papika not only finally returns Cocona’s (slightly broken) glasses, but also asks her to help her with a task related to returning to the realm of “Pure Illusion”. Needless to say Cocona is not much in favor of this. It is then that Papika notices a sweet scent coming from Cocona and Cocona to her surprise finds a gem of some sort in her pocket that glows. And with this all hell breaks loose as semi robotic super trooper looking soldiers show up, capture Papika in a net, knock Cocona out with a chloroform cloth and … the episode ends. -_- Cliffhangers! Argh! 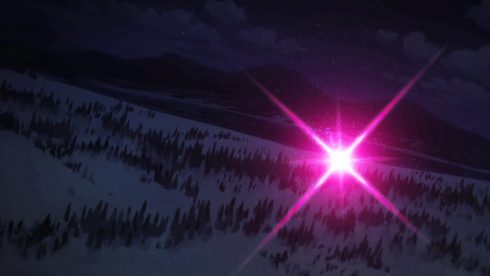 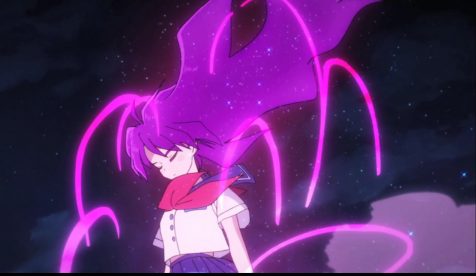 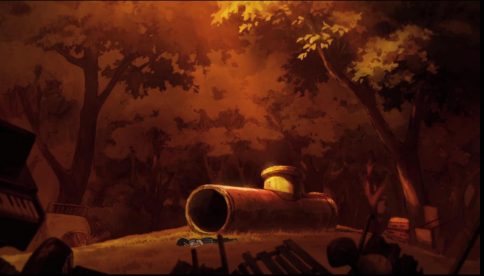 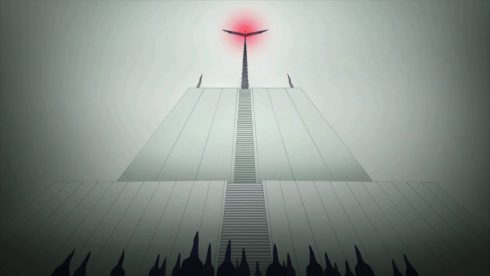 So then … other things of interest specifically as related to the OP and ED. From the OP sequence (which is definitely a high energy piece, but not unpleasing to be sure) it seems there are “bad guys” in this story too – the KKK cloak wearing lookalikes, and perhaps those super-trooper, robot looking soldier guys/things who captured the pair at the end are the minions of the bad guys? Perhaps this evil group is also after the Shard? (For nefarious purposes, of course.) The ED, however, is definitely a different thing – more eerie, with minor notes, and even putting one in memory of the superb ED from the amazing series Jinrui wa Suitai Shimashita. The OP and the ED were helpful for me, though, in a different sense. It was as if they were representing the “two sides of the coin” that this series might eventually be showing us – for the first episode the frenetic and wide eyed feel of the OP seemed the main thrust, but the slightly off key and disturbing tones of the ED, presented through the visuals of periodically going into the area of “not a fun dream but a nightmare” were well done, but also (I think) will likely be heading our way soon – at least that is my guess … and hope!

As for the episode itself, overall I thought it was well done. The strengths were definitely in the animation, hands down, but it if I was to give it a weakness I would say it was hard to digest. Many, many of those who I read giving their feedback about the series said things like “I don’t know what that was that I just watched, but it was really good! So … what is going on again?” on the one hand to “I don’t remember taking drugs before watching this … I am totally confused here.” Even with all that, however, many (and I as well!) are more than interested to see where the story will head from here out. Strong premiers are very nice, but strong follow-ups are even better much of the time. I still have high hopes for this series, and in its ability to bring everything together for the viewers, but … we will see! Incidentally I do not expect I will be blogging this one, despite being very interested in where it will be going. But I may write an end-of-the-season review for it. For those who watched it, what were your impressions? ^^