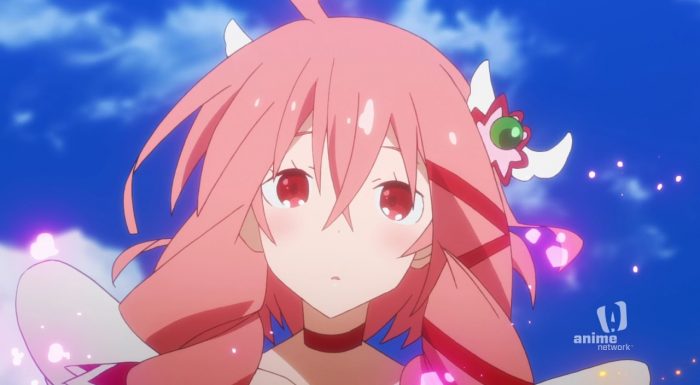 I didn’t know what to expect coming into this episode, but can still say this episode had some surprises. There was a fair amount to ponder about this episode by the end of it. I have no idea if this will be a great show or just a solid one, but there was at least plenty to think about. Will say that I probably won’t end up covering this for the whole season, but it was good enough to talk about the first episode. Strangely the supernatural powers involved wasn’t even the most curious thing about the episode, which was saved for the family situation involving our main character. 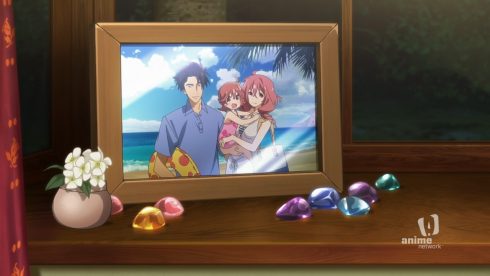 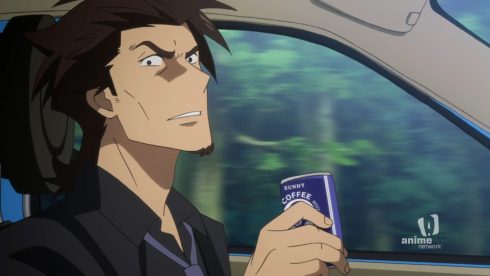 There is certainly something odd when for the whole episode you have Matoi referring to her father by his first name. We actually need her friend Yuma to call him Matoi’s father for us to be able to know for sure. Considering we saw the picture in the house of the family of three, it is clear that they did live together at one point. Is one possibility him not being her biological father? If he married her mother when she was a kid that might explain why she calls him by his name. She started out unable to call him “dad” and as time went on she just got more used to calling him by name.

Of course that possibility opens up a lot of questions. The summary gives us some pieces of information such as Matoi living with her grandparents for a time after her mother “left.” How long was Matoi living with her grandparents? Why could she only move in with him recently? And honestly I still don’t think she’d call her father by his first name after being separated by a few years. She still refers to her mother by that title and she’s been gone much longer. 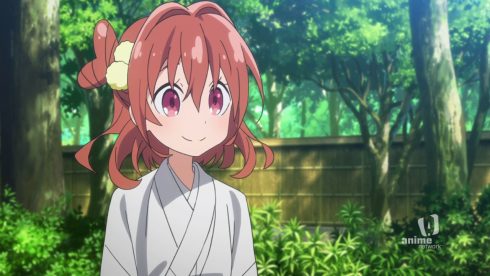 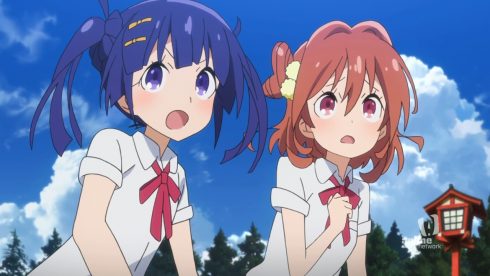 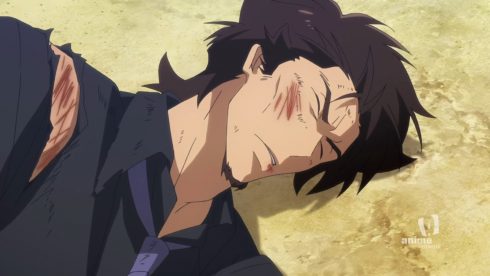 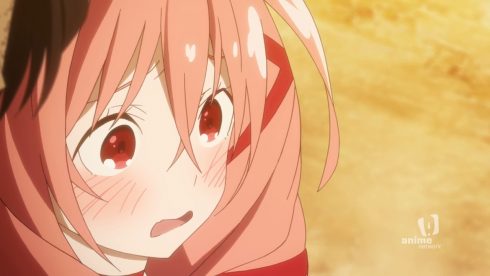 Another thing I’d like to comment on is the potential awkwardness of the situation going forward. Matoi has gained a power that transforms her into this ‘slayer.’ The side effect of that is that it makes her appear similar to her mother. To the degree that Matoi herself was momentarily shocked, but even more so….that her father mistook her for her mother. And that got all kinds of awkward in a hurry. To be fair he has been separated from her for a good while and he was probably pretty messed up from his injuries. Biological or adopted, can’t say there are many anime I’ve seen that had a father momentarily groping his daughter…

This could just get pretty weird going forward. I mean if she speaks up then it should be easy enough to clear the misunderstanding. Though maybe she wouldn’t want to reveal the truth. That could create conflict from what she’s involved in now. This also opens up the question of whether her mother also had this kind of power. Is there a connection to her disappearance? This could lead to some real drama down the road if this power has some kind of major price involved.

Although you could say the power has a price involved considering it ate Matoi’s clothing…I mean this could become a very expensive battle she’s involved in. Clothing isn’t exactly cheap, unless she plans on going around in bargain bin outfits. Matoi might have to start charging people respectable fees for saving their lives. 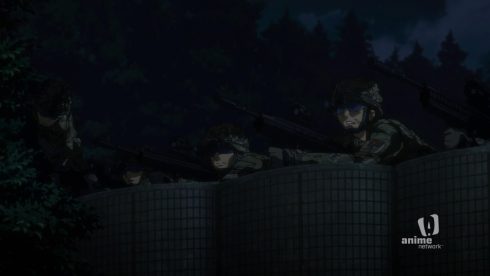 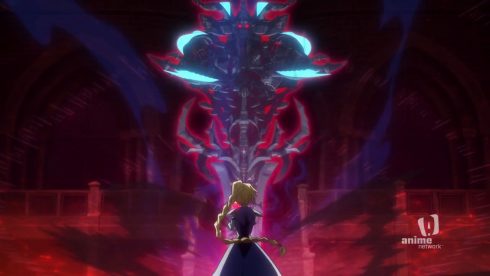 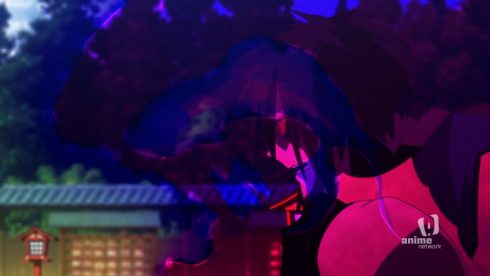 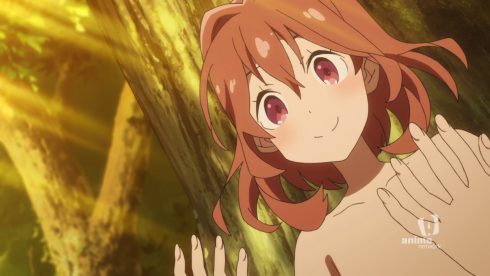 I will say the first transformation was well done. They got across the almost mystic quality to the power that Matoi gained there. They didn’t mind making fun of Yuma along the way either XD. There wasn’t much action in this first encounter, but rather Matoi just kind of blindly protecting herself. It worked so I suppose there isn’t a big issue there XD.

The start of the episode was pretty messy though. Ignoring the “ehhh” Engrish, the soldiers really had a bad day there. I suppose you could make a pun that they ran into problems because they didn’t get people who could speak fluent English for their communications room! Come on, there should be a basic English equivalency test before you start ordering soldiers! The interesting thing was the very different feel of the first girl we saw fighting. In a sense it was almost Nanoha-like with the machinery involved in her transformation/combat. With Matoi it felt like she was gaining the powers of some kind of god. In comparison this other girl was closer to gaining the power of technology along with something more…demonic? 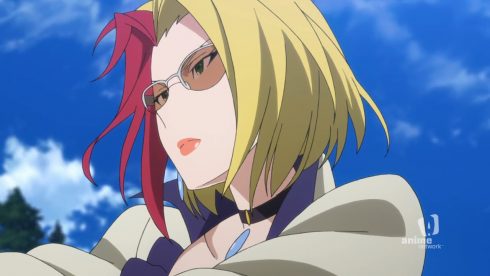 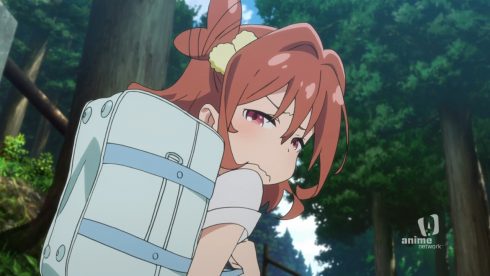 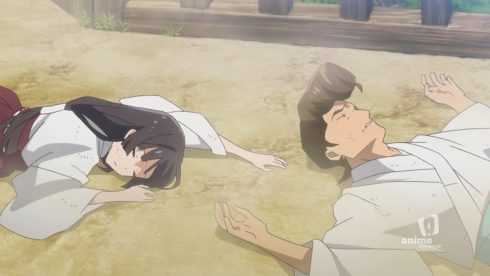 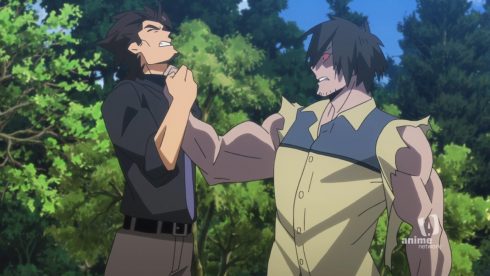 This was a decent first episode. Honestly if you don’t dig through the summaries or character profiles then there are a ton of questions coming out of this episode. I’m honestly curious where things will go from here. Certainly this is a visually different type of show than White Fox did with Re:Zero. It both feels like a more intentionally comical side…and also cheaper. Maybe they burned the budget to hell with that show and have to take it easy with this series to make up the difference.

in Matoi the Sacred Slayer