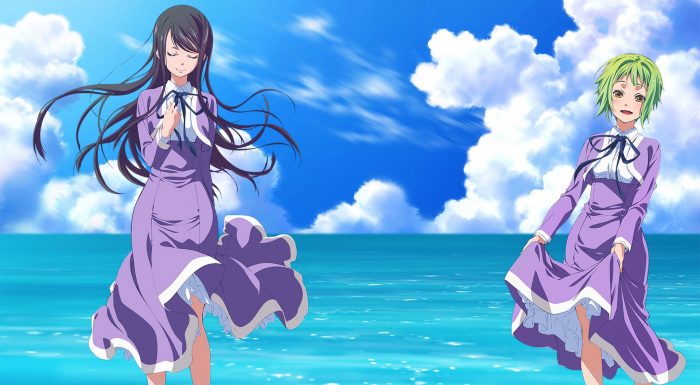 It should be no surprise to those familiar with my blogging that before the Summer 2016 season began my most anticipated series scheduled to air would be Amanchu. As a huge fan both of Kozue Amano’s manga as well as of Sato Junichi’s direction in bringing her previous work (the Aria franchise) into the anime adaptation format, my expectations were quite high, and fortunately for me the first episode out of the gate was lovely, uplifting and pretty darn faithful to the source material. The strongest points of the series from the get go for me undoubtedly were the soundtrack (I thought the guitar music by Gontiti was perfect while the OP is undoubtedly my favorite from the Summer 2016 season) and the incredible art. Like last season’s Flying Witch (also adapted by J.C. Staff) the art in Amanchu was downright breathtaking at times. 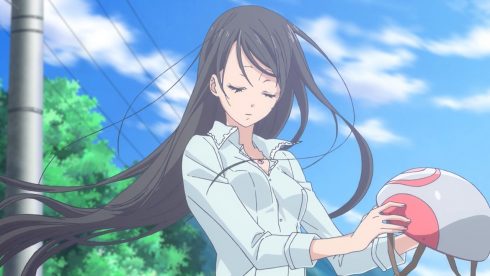 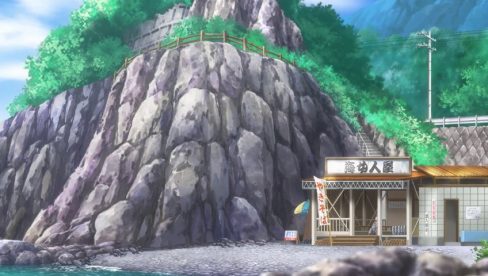 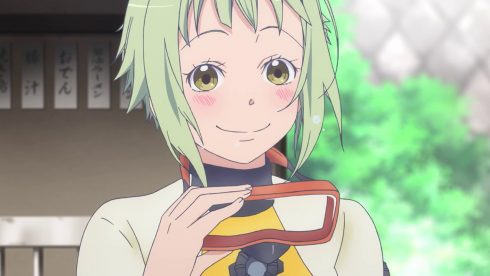 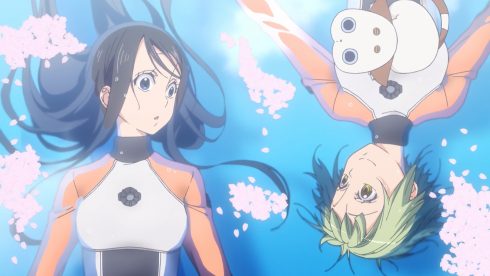 When the second and third episodes came along, however, it began to slowly become clear that this was definitely going to be yet another adaptation of the source material – in other words, Sato Junichi knew exactly what he was doing and what he wanted to do, which involved being faithful to the spirit of the source material but creating a story from a slightly different angle and approach. And in the case of Amanchu one of the main characteristics he opted for was “stretching out” and going into slow details about the growth of Futaba, who definitely becomes the main character in the series – in the source manga Futaba and Pikari sort of “shared” the main character role equally, I felt. As a result, we are shown more of her inner struggles and the hurdles she begins to encounter and overcome bit by bit, at a pace that felt (to me) more drawn out than was shown in the manga proper. It did not bother me, though, and in many ways I found the different approach to be rather interesting, and it brought to light the story as a whole in a slightly new light – to me this is one of the signs of a well done adaptation. 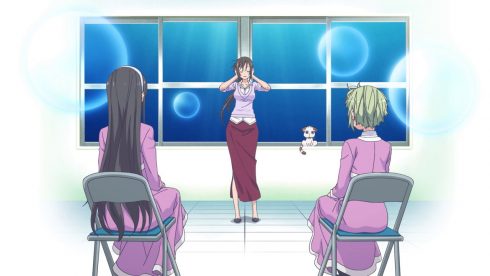 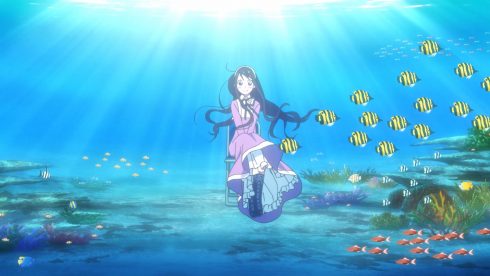 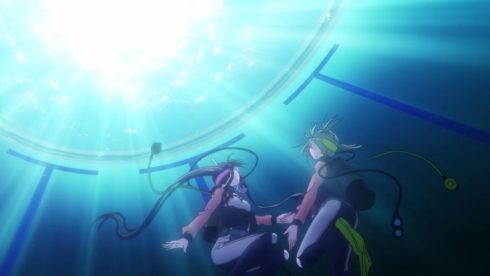 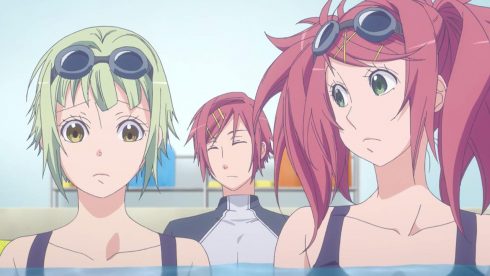 Since the focus of the series shifted primarily to Futaba and her inner struggles, it was not surprising that we encountered a fair amount of the episode material in a series whose focus is around scuba diving outside of the water itself, and because of this angle of presentation the episodes themselves were assembled and slightly rearranged to fit the narrative from different chapters of the manga itself. The overall effect was … well, surprisingly effective for me. Since I am pretty familiar with the source material I found myself delighted and surprised at many of the episodes: “What? He stitched together that part of that chapter and that part of this other chapter and placed it there in the chronology? How interesting!” And overall the “total sum” result of how both Futaba (and Pikari, curiously) came across to the viewer was … intriguing. The characters as a whole often came to life in ways totally unexpected, and there were even some downright delightful surprises – one example was the choice of the VAs for Futaba’s Middle School friends being the same voice actors who voices Akari and Aika from the Aria series. Many, many viewers mentioned breaking into a huge grin on first hearing them, and I was no exception! 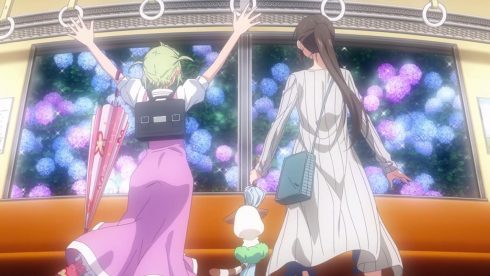 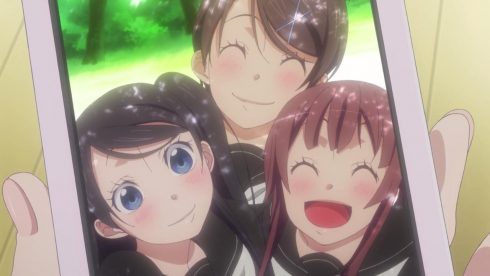 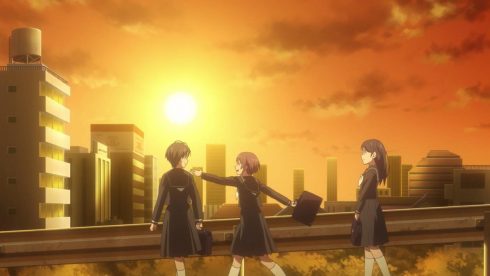 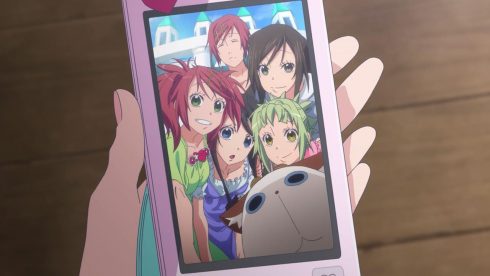 While there was much to praise in the adaptation there were a few minor nitpicks I had with some of the choices, though, and both of them involved attempts at humor. One of these was undoubtedly the number of times the anime opted for drawing the characters in “chibi mode”. This was, of course, done in the manga, but nowhere near as much. For me it felt like a combination of saving animation costs and making the series a little more “accessible” to a wider audience. The other difficulty I had was with what I felt to be an over-emphasis on the violent habits of the older sister of the twins towards her younger brother. Again, such elements are present in the manga, but nowhere near to the degree they were shown in the anime. And in the same breath I felt as if the manga did a better job at fleshing out the inner world of the twins. That’s not to say that no efforts were made, but for me the overall effect I felt the twins felt underdeveloped compared to what I received from reading the manga. 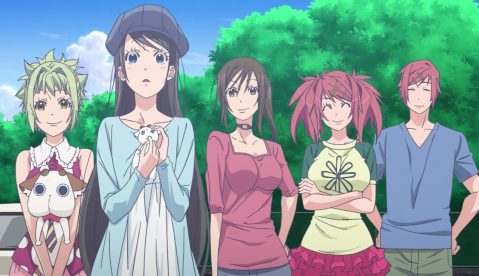 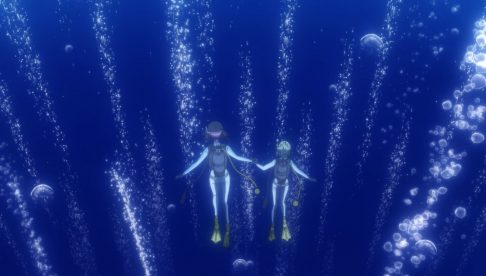 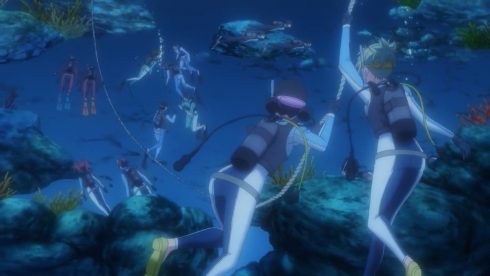 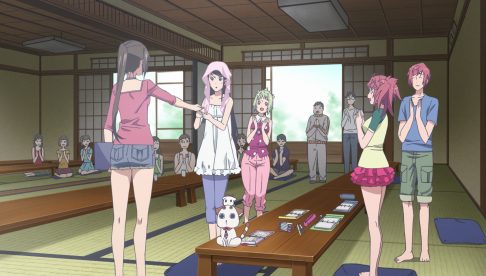 Those minor complaints aside (stemming from knowing the source material as contrasted with going into the series “fresh”) most everything else about the series was simply delightful. Special mention in the art department should be made to any time water was involved on screen, whether on the shore, floating on the surface of a pool, diving near the bottom of the latter, and especially the scenes of underwater diving along the floor of the sea’s bed. While the manga’s art is still incredibly beautiful, I gotta hand it to the anime studio – they did a stellar job showing the viewers what it was like down there and overall this series was an excellent effort in so many ways.

As mentioned in the Flying Witch review, there are few things as consoling as having a beloved manga series receive such a care-filled anime adaptation with such attention and love for the source material itself. Whatever minor faults this series may have had with me, nevertheless on the whole it was my favorite anime of the summer 2016 season, and I am more than glad to have had the opportunity to have blogged it. For a final score I would give the series an A- rating, and would love, love, love to see more seasons of the story, especially as there is a fair amount of material out there. Many thanks to all who following along watching this series with me. ^^