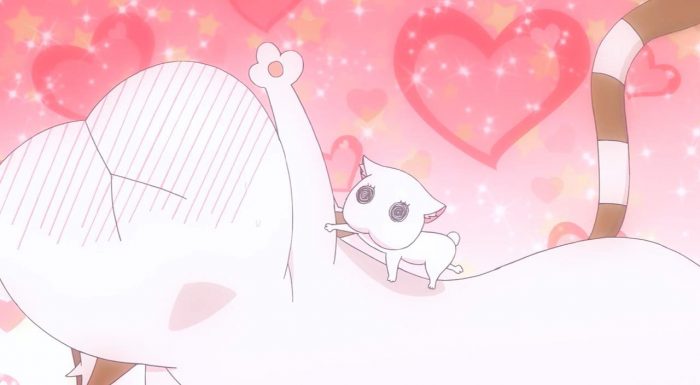 What an interesting way to introduce the whole subject of Hime, Advisor Chaa (actually named Aria, it turns out – should have guessed) and Advisor Chaa’s owner. Quite different from the manga, and yet … it worked, and worked quite well – and it even introduced the element of Futaba identifying herself with Hime as part of the main cause for her wanting to care for it. I really liked the anime-original elements woven into the episode, and thought the whole thing worked out quite well. What a great work of adaptation this continues to be. ^^ 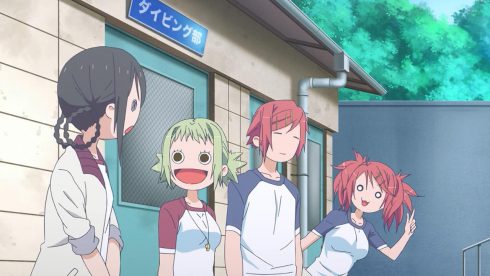 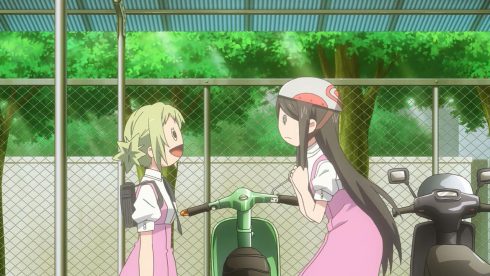 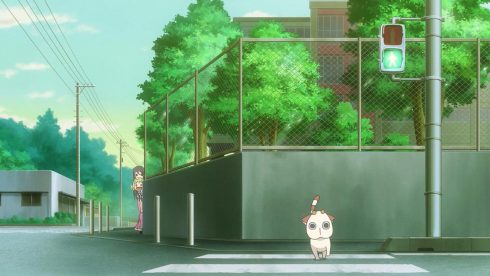 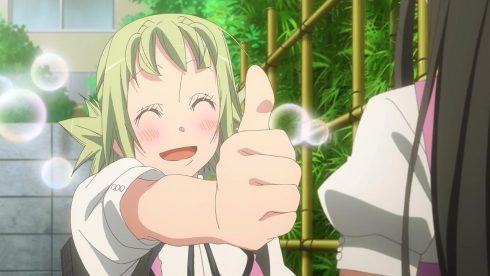 Let’s see here … in the manga Pikari and Futaba first learn who Chaa’s owner is while out on a jog (although at the time they don’t know that he is the Principal of their school) and what Chaa’s actual name is fairly early on (in fact, after the chapter focusing on Ai discovering the misplaced love letter in her shoe box), and they learn these things just minutes before they come across the crow going after the kitten. In the anime the episode began with them knowing who the principal was already (which makes sense if he spoke at the opening ceremony), though they do not find out about him being Aria’s owner until the very end. 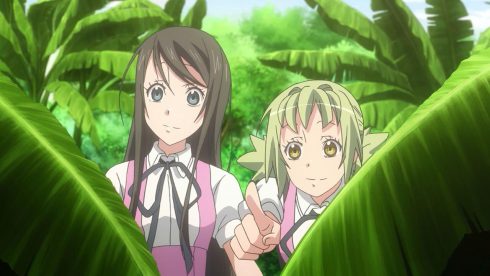 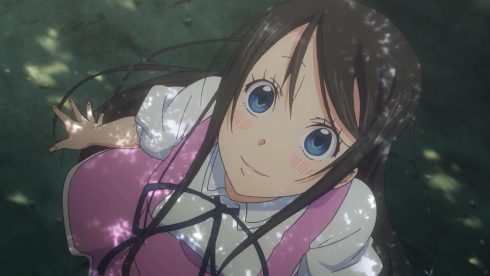 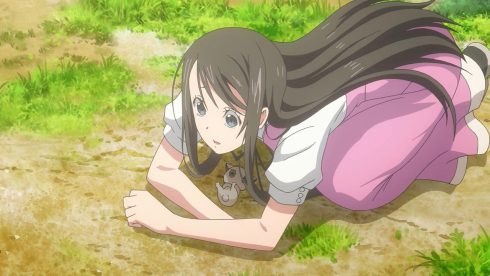 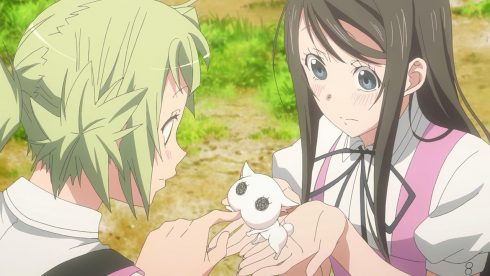 Instead the episode begins with Pikari and Futaba deciding to follow after Chaa as he strolls by after school and club activities are over … and on following him they eventually find themselves deep in some forest and next to an old shrine. The deep foliage and greenery of the scene of the shrine is super well done (and having been to Japan and seen some of the shrines they really are nestled in such a thick, rich, green setting much of the time), and really captures the beauty of setting. It is at the shrine deep in the forest that they find the kitten being pursued by a crow. (In the manga it was in a park.) After saving the kitten from being killed Futaba in particular becomes attached to it and begins to care for it, bringing it home for the evening before bringing it to the club room the next day at school (the apartment she is staying in does not allow the residents to keep pets). 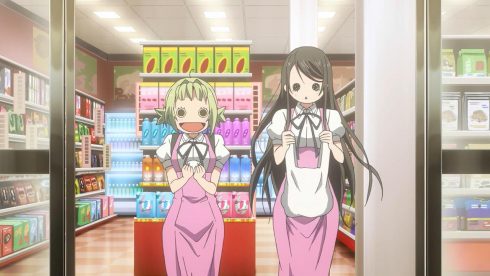 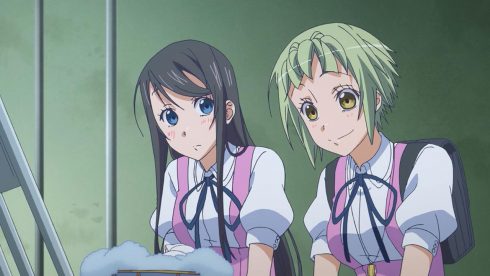 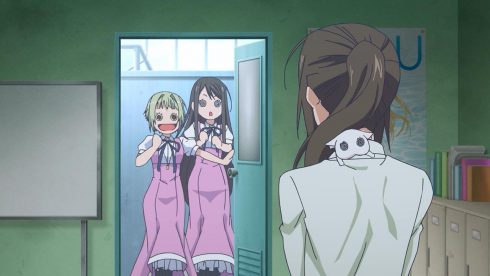 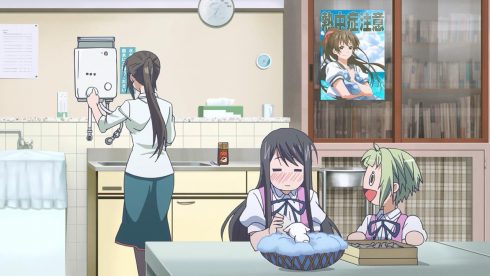 The idea is to use the club room as a temp place to house the kitten while they search for an owner that will take it in, of course, but Katori-sensei notices the two of them sneaking to and from the club room in between classes and discovers the kitten. She gives them a hard time about it and insists they be more responsible and think the matter through more after bringing the kitten to the nurse’s room, and while there we discover that Futaba actually HAS been thinking about the matter seriously. Interestingly, Futaba not only finds herself identifying with the kitten (in her case she says it was Pikari who “rescued” her) but in a way she wants to “give back” in some small way as well, and feels the kitten is her “responsibility” assigned to her in a way. 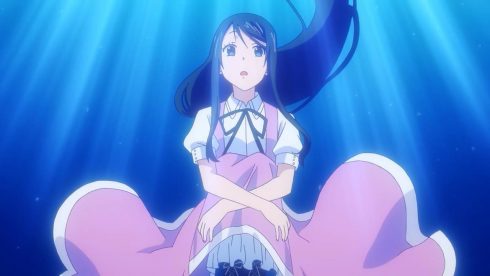 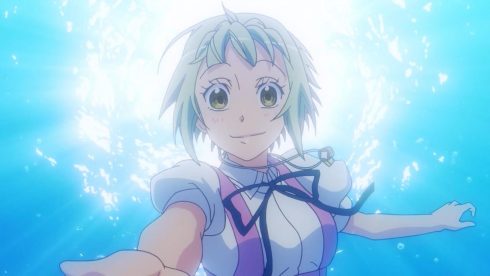 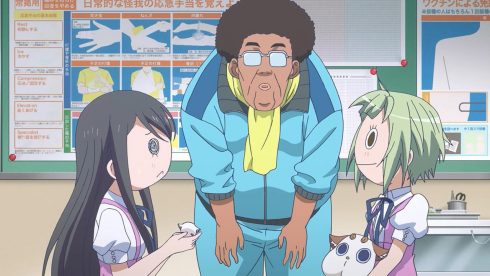 Her comments totally take Pikari off guard and impress Katori-sensei, but they also impress the Principal, who just happened to be resting behind a curtain on one of the beds (after taking a jog – probably a nod to the source material). Chaa/Aria also happens to be present, and after informing them of the cat’s name (although it does not quite register with Pikari) he agrees to adopt the newly found kitten, much to Pikari and Futaba’s delight. This movement outward that Futaba is showing, this wanting to come out of herself and “give back” to others what she has received is definitely a huge turning point in her development as a character.

The episode ends with the Diving Club heading out very early in the morning to take some of the last tests required for Futaba to complete her Entry level diving qualifications. Hmm … it looks like that event is going to be the one they end this season on (pleeeeeease let there be more seasons, please let there be more seasons), and it is likely that next episode we will finally get some of the beautiful underwater scenery in the source manga. Hopefully it will be a strong finale! See you all next week! ^^