Nanatsu no Taizai: Seisen no Shirushi – 03 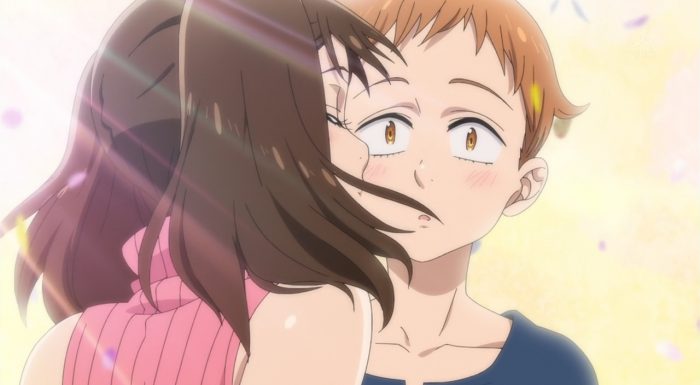 I had fun with this episode. My expectations going into this one was that it’d be a pretty weak love triangle episode with Howzer getting too much focus despite not standing a chance. Instead we got an episode that focused heavily on King and Diane…and that was all. It didn’t pretend that there is a realistic option outside of the King x Diane shipping. And I’m sure for those who enjoy some shipping that was a comfort. It did end with a sigh worthy memory reset, but it did show a lot. We learned a lot about what Diane actually remembers and the fun she had in this episode. In a sense her growth was more important than King remembering this. He still has feelings for Diane so it’s not like that got reset, it just doesn’t push their relationship into a full blown romance quite yet. 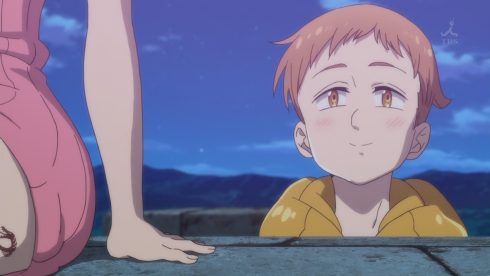 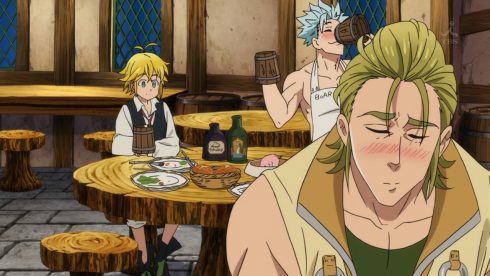 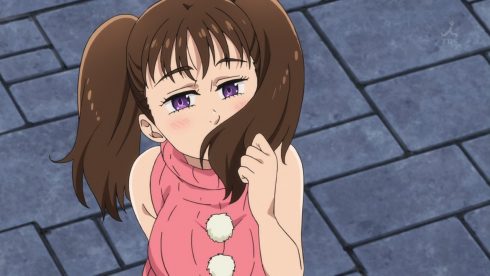 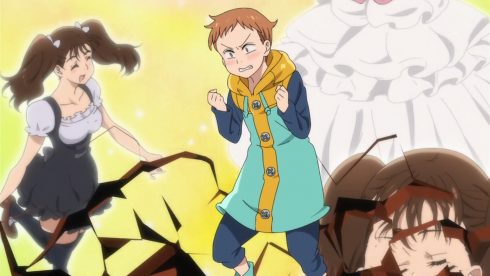 It’s nice for Diane that she does remember her past now. A big chunk of her life to this point is now open and she can decide for herself what to do going forward. It doesn’t seem like she’s that focused on Meliodas as a love interest and has well moved on. Although could say she moved on pretty effectively before getting her memories back when accepting that Meliodas and Elizabeth just fit. She considers Elizabeth a good friend and even Diane realizes after a time that Meliodas just doesn’t see her that way. Such is how it goes. At least she’s been able to decide on things with King and just has to make her choice to tell him again what she remembers.

While King being silly about Diane can be nice, I approve when it gets a bit more serious than that. Instead of all the stupid ideas he came up with when chasing Diane, he went with a much more honest question. Just finding out what Diane remembers since that does change a lot. It’s a bit too bad that he forgets all that, but in the end that’s just a short term thing. She’ll tell him again sometime. Diane remembering and focusing a lot more of her attention on King says a lot about where things could go. And the both of them taking their time is fine, they are much longer lived creatures than humans. There isn’t necessarily a rush to kick start their relationship. 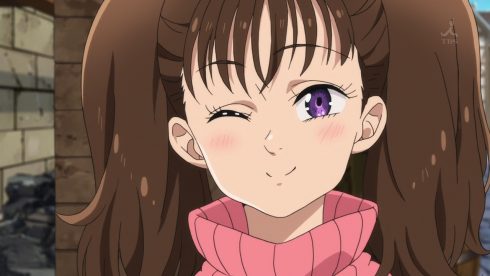 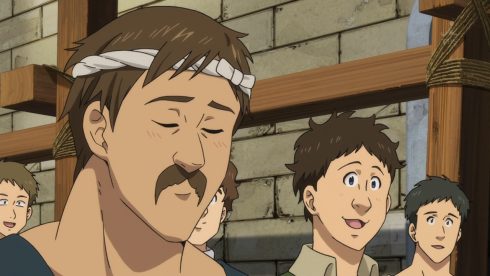 The scene with the workers was a nice one and I’m glad it didn’t spiral out of control. Rather than focusing on the negative for people the show went more optimistic. That the people living in the capital are good people. They made bad choices in part because of what they were told about the Sins and also their fears. While a bit of a showdown of ideals would have been interesting, I like that both Diane and the workers felt bad. There was a great deal of regret on their part in terms of not having treated Diane well. It didn’t require a big showing on Diane’s part either to accept their apologies. That they felt that way meant a lot to her. Someone who had so many bad experiences with people simply because of what she is. 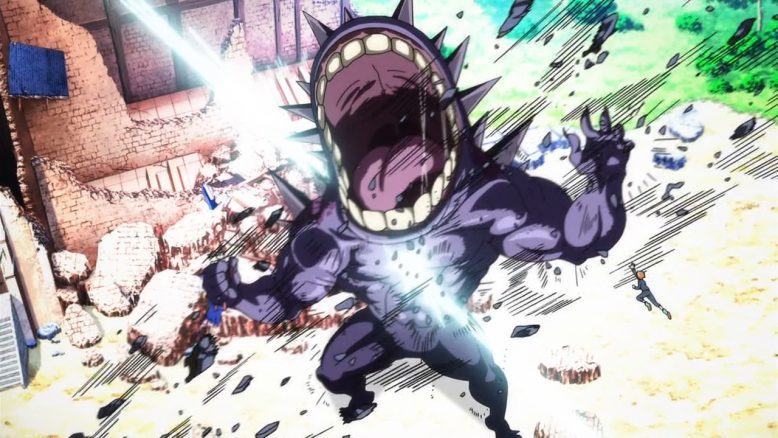 I did find the showdown against the berserk new generation interesting. I would agree it’s a stretch that this one somehow managed to stay hidden all this time. Although maybe he was imprisoned by Hendrickson and couldn’t go berserk during the climax of the first season. It might have taken this long to break free or maybe even turn into that monster. Certainly King and Diane cleaned that up without too much trouble. A few comical moments, but they weren’t in any real danger there.

What is a bit surprising is that they didn’t go and grab Ban. Without him there was no way to actually save the holy knight who had turned into that thing. They just nuked him along with the parasite. I mean there is no way that guy survived. Not that I suppose they are the types to be shaken up that much about taking a life. They’ve had to kill a lot of enemies over the centuries they’ve been alive. Too bad for that guy. 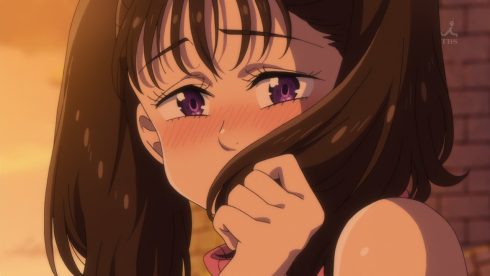 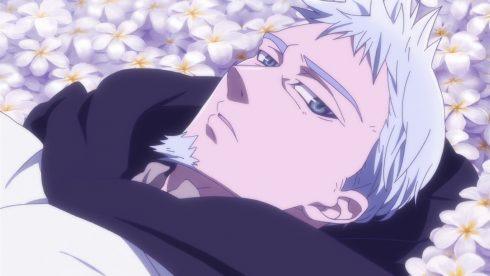 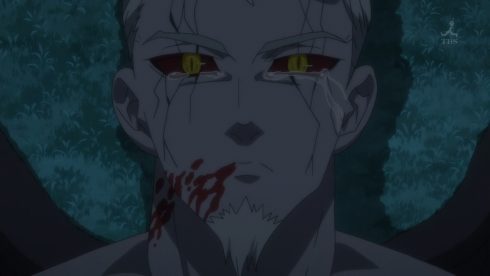 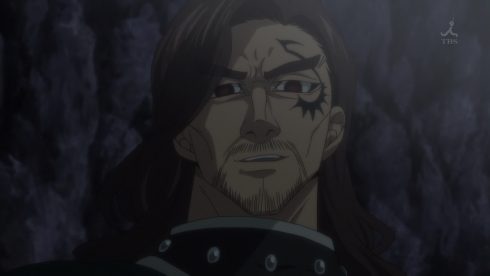 And of course we have our weekly peek at what Dreyfus is up to. The fact that Hendrickson is barely alive and pulling his body back together is both creepy and surprising. So he did fly off barely alive after that Revenge Counter while his body parts basically had to make their way over to him. The much stranger portion was with Dreyfus who…seems even creepier than last week. Somehow his blood actually restored Hendrickson and allowed him to restore his body. There is just a lot of weird going on with Dreyfus who is looking much more involved in all this than anyone suspected during the first season.

It should be interesting to see how the fourth and last episode of this mini-arc plays out. Maybe they’ll focus a bit on Gowther for an episode and also just make a point of setting things up for a full second season. Here’s hoping we get some kind of announcement out of the next episode. That would make these episodes all the more worth watching.