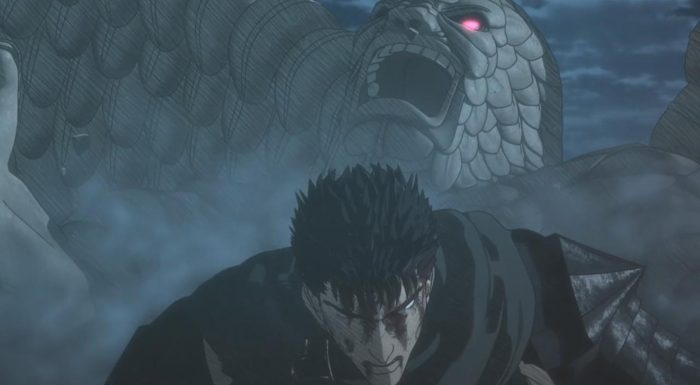 Mark that down as another successful episode for the 2016 Berserk anime series. I may be sounding like a broken record at this point, but it just continues to astound me how much this series is able to do in spite of its production value issues and small budget. Its just so darn impressive that this series is as enjoyable as it is, and is able to maintain such a sense of momentum and rhythm despite all the various frames and scenes where the experience is at the risk of just breaking down. 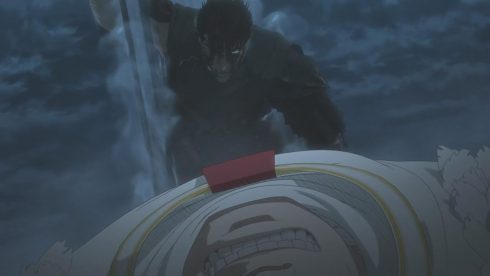 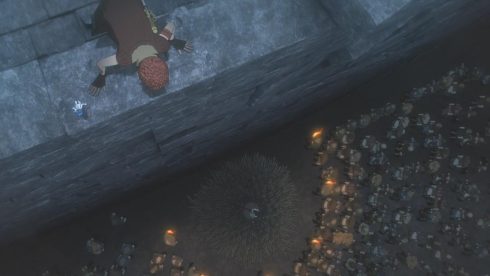 This week featured another great dose of expertly paced battle sequences, fun character moments, and a serious forward progression in the story. It feels like every moment and every scene in the show now counts for something. Nothing feels like a waste, and if anything, I can almost see the complete “GAR!”esque way in which the anime production staff are forcing themselves to tell the story as best they can.

The fight that erupted between Guts and Mogzus, was pretty darn splendid to see. It was a tense battle, with Guts almost entirely on the brink of death, while Mogzus seemed near indestructible. The look of Mogzus’s Stone form, actually lent itself really well to the 3D Cell-shaded CGI that this series has been using. The battle itself, while not the most dynamic, had a nice collection of shots and angles that keep the action going. 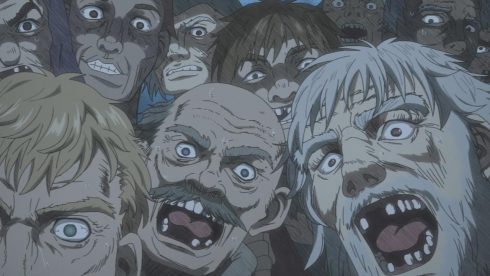 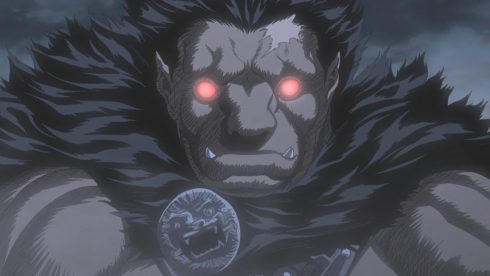 At this point, its actually the scenes and frames we got of hand-drawn animation, that seem to feel out of place and lackluster. There’s a very incomplete, storyboard like feeling to the visuals whenever the show shifts away from the CGI. The shots that we got of the “normal” people, for lack of a better term, were horrendous and definitely very noticeable. But for every horribly rough scene we got, we also got a stellar collection of moments.

Guts versus Mogzus, the rest of the group taking on the twins and working well together, it was all fun to watch. And in between all of this fighting and savage violence, Berserk also managed to throw in quite a bit of emotional story beats as well. I particularly liked how Guts and Mogzus clashed on the idea of faith versus taking things into your own hands. Both are extremes, and as a religious person, I myself like many others, fall somewhere in the middle, but I liked how Guts showed the problem with just blind faith. 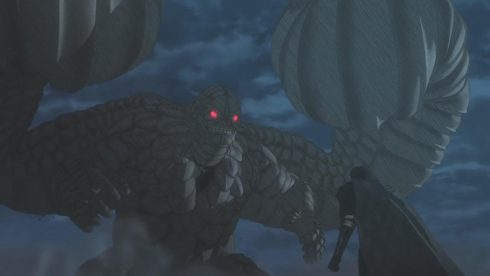 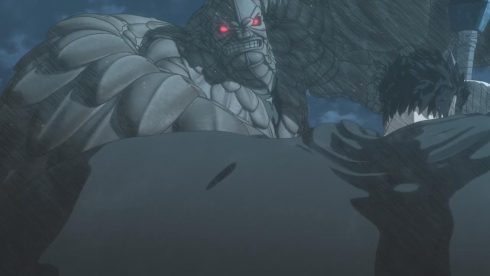 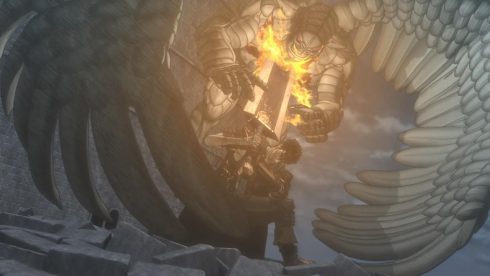 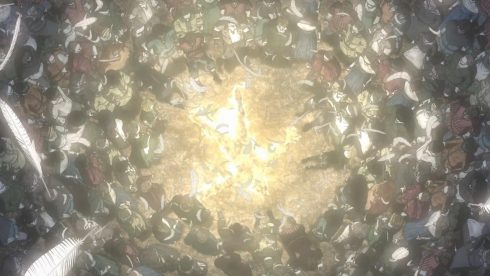 Faith itself isn’t worth anything if all you do is stay static and just keep praying. Taking action and helping yourself is equally important, and I think that’s the larger point that Berserk is trying to make here, even with its clearly anti-religious slant on the whole argument. And I like that, and by the end of Guts’ big declaration of how twisted and selfish the people down on the ground were, I was rooting for him to take down Mogzus.

And its worth noting, that every attack, every blow, and even the big death scene where Mogzus literally was a fallen angel that burned up, was beautiful to see. I myself do wonder why the series didn’t just stick to everything being CGI, as I think it worked quite well in the prequel films to this series. Hamstrung budget is a hamstrung budget though, so it is what it is. 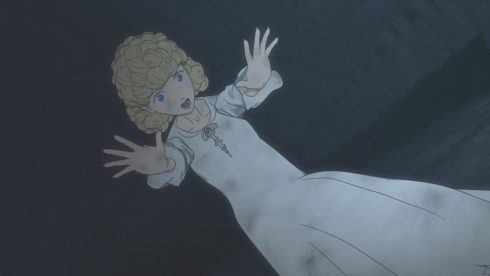 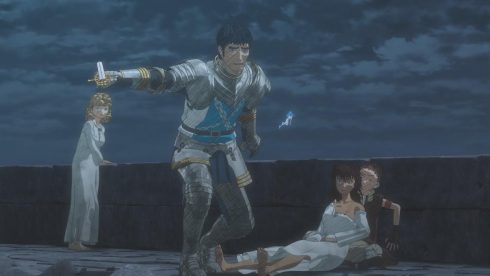 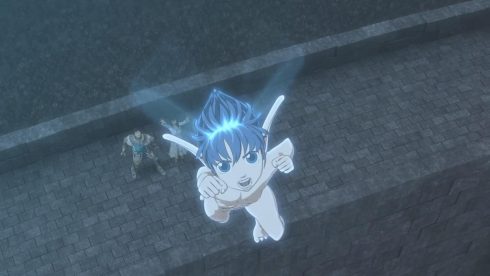 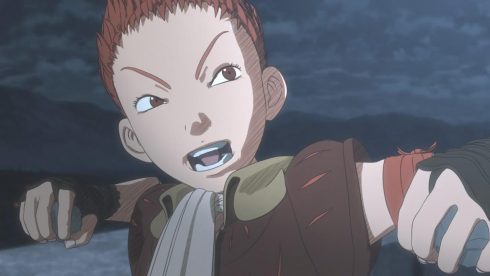 Beyond just Guts and Mogzus though, I loved how the other characters each continued to do awesome things. Ishidoro and Puck working together was an awesome moment, as was Jerome jumping in and basically taking the plunge in terms of clear defiance of his own Organization. Nina was still being Nina, and ended up thinking only of her self, and getting herself in even more trouble. I will say that I didn’t quite care for the comedy bits that the show shoved in, on top of everything else, but they were sparse and quick enough, that they didn’t disrupt the momentum too much.

And the episode did well, it took care of the Mogzus story beat, it also moved forward with the Behelit child storyline, and it ended with Guts and everyone else around him preparing to make their struggle until dawn. Which, props to the episode and the direction for ending it at that point. We got enough of events to where the episode felt satisfying, but there is the final push to survive and make it alive into the next day. Which, feels pretty indicative of Berserk as a whole. 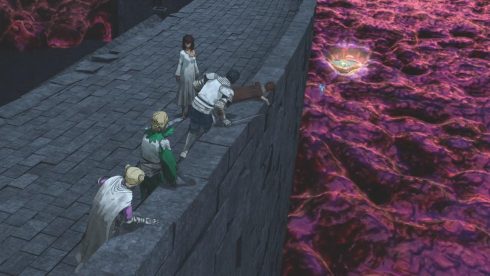 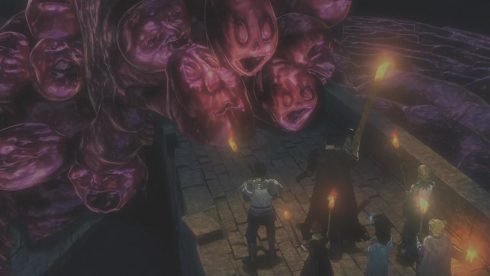 A part of me wants this series to succeed, and be financially viable, so that we get a continuation with a better budget and more financial backing. Another part of me wonders if it deserves to, given how amateurish it looks at times. I guess I’m not entirely sure where this show will end up on that spectrum, but I will say that it continues to surprise me each week with how good it is regardless. As we near the end of the arc, and the series as a whole, I’ll once again say that, that is a good place for this series to be.