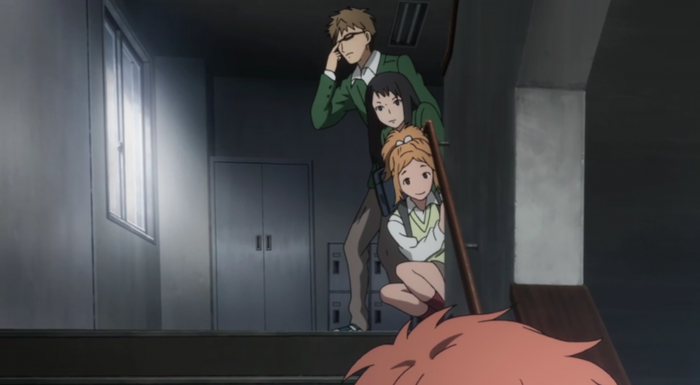 Even though a good portion of orange focuses on realism and day-to-day high school events, I don’t tend to think of it as a “slice-of-life” because it has such a clear end game and driving story line (save Kakeru/change the future). The constant sense that we’re moving towards a tangible goal helps orange maintain tension even during its most mundane arcs and conflicts, but it can also serve to make episodes like this one feel frustratingly slow-paced, as if we’re just marking time before the next major “Kakeru event flag.”

That isn’t to say the quieter stories don’t serve a purpose, or that the cast aren’t likable or interesting enough to carry us through everyday events (I love hanging out with these kids, personally). orange‘s narrative arc is a kind of rise-and-fall, a sequence of highs and lows for Kakeru and, by extension, the rest of the cast. Which, while it can lead to some lulls in the story, is also a pretty excellent depiction of grief and depression. Healing isn’t a constant rising line; it’s a series of crests and troughs, some created by obvious triggers, some by far more obscure ones. 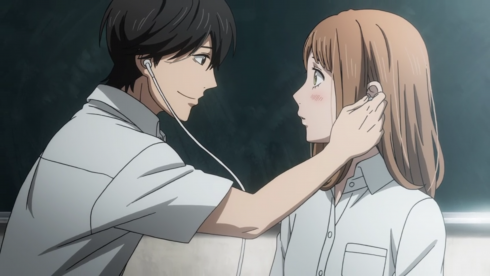 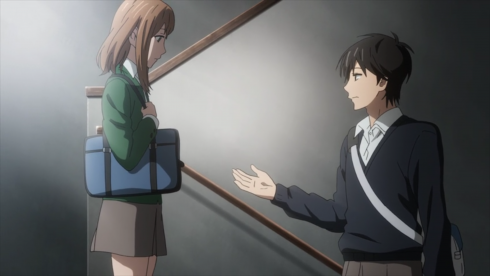 Likewise, relationships and personal change tend to go through bursts of growth followed by quieter stretches of status quo–or even backtracking, drifting into old patterns and habits. So it’s not surprising that, after last week’s explosion of emotion, we even out again, settling into day-to-day happenings like budding romances and the upcoming sports’ day. Nor is it surprising that shy Naho slips back into her old indecisive habits, unsure how to move forward and so sitting hesitantly in one place.

I think the anime adaptation could have moved through these still waters at a snappier pace (I thought for sure we’d get to the relay this week), but overall I respect orange‘s decision to push for realism and keep things steady, even if I didn’t personally enjoy this episode as much as I have others. And hey–it isn’t like we didn’t get at least one major reveal along the way, so I certainly can’t say it was all quiet on the western front. 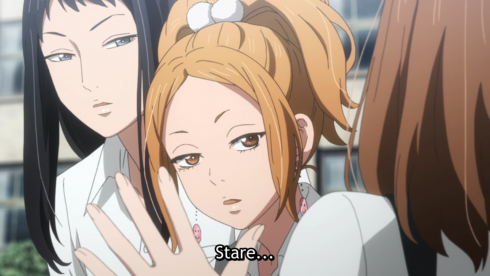 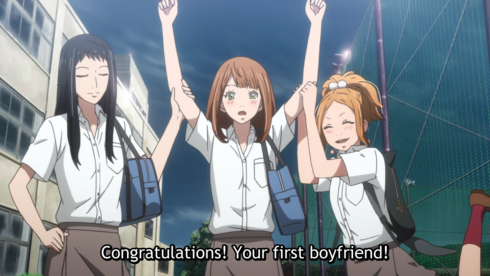 There are two main stories this week–Naho and Kakeru’s relationship and the relay race–and even though they’re both technically about Kakeru, they’re really stages for The Best Friends Gang to step up and shine. Despite his exhaustion on the soccer field, Kakeru does seem happier this week, flirting with Naho and voicing his excitement about being the anchor in the upcoming relay race. He wants to “be of use,” echoing his wish to “do something for Naho” from last week, an ongoing and understandable desire given that he feels he couldn’t save his mom.

But Kakeru’s still afraid of hurting others (and being hurt himself, no doubt), so he rejects putting a label on his relationship with Naho, can’t work up the courage to just ask her to hold hands, and caves to Suwa’s concerns that he might collapse during the relay race (and, he thinks, disappoint everyone by losing). For the first time, Kakeru seems willing to move forward in his relationships and school life, but he’s still vulnerable, uncertain and easily intimidated by the weight of responsibility. 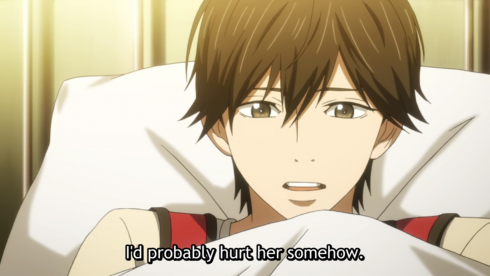 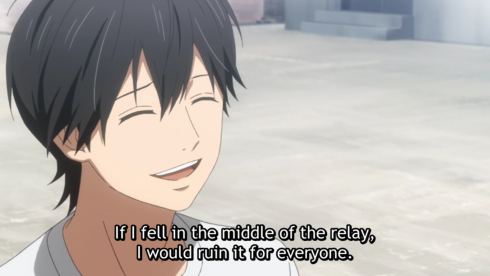 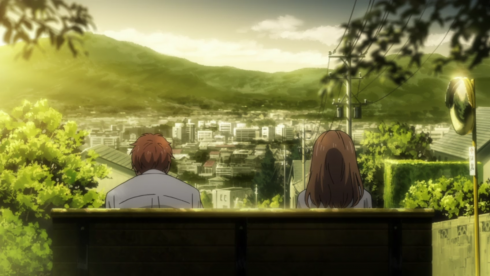 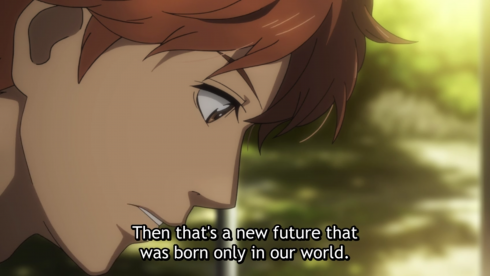 For once, Naho and Suwa are of no help, paralyzed by their reliance on the letters. Naho doesn’t want to officially date Kakeru because changing too much might mean the letter couldn’t help her anymore, and Suwa’s so certain Kakeru doesn’t want to run in the race that he ends up shaking Kakeru’s already fragile self-confidence. The letters have served as both prophecies and advice columns up til now, but as this timeline veers further from that one, they become less useful–just one more possible future among hundreds.

Naho’s central conflict is on the edge of redundant this week, since we’ve seen her struggle with the letter’s advice before, but I think the important difference this time is that she’s not failing to act or acting on her own, but acting in direct defiance of the letter’s instructions. “Don’t let Kakeru run in the race,” it says, but this Kakeru isn’t the same as that Kakeru anymore. He’s opened up to others, and they in turn have sympathized with and accepted him all the more. Naho and Suwa are stuck, wanting to help their Kakeru but too afraid of the letters’ prophesied future to know what to do next. 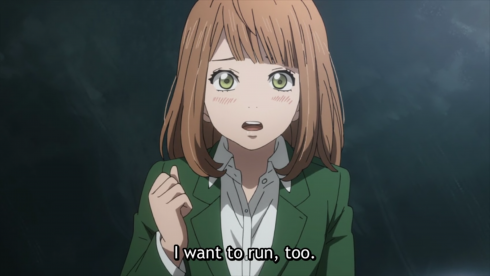 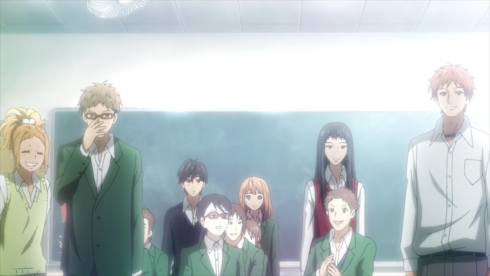 Thankfully–and as orange hammers home a little more each week–they’re not alone. Takako and Azusa act with confidence and creativity, finding a way to show Kakeru they trust him to run in the relay while also making sure he doesn’t feel like he has to win or he’ll let everyone down. The relay race becomes a group activity, something fun he can do with his friends, rather than a responsibility for the school.

The moment when all six of them stand up in the classroom is one of my favorites in the series, a spontaneous burst of solidarity and love that reminds us how much The Gang has cared for and looked out for each other from the very beginning. Even reluctant slowpoke Hagita throws himself into it once he sees how happy it’s made Kakeru, even practicing after school with Secret Crush Azusa. 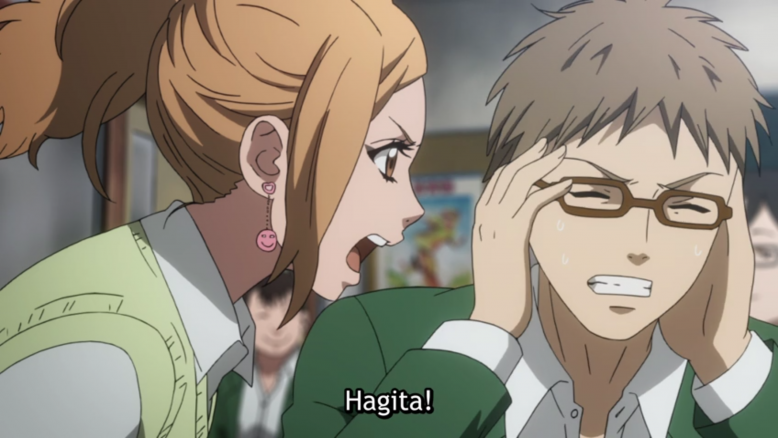 Then of course there’s the final scene on the rooftop, when The Gang offers dear oblivious Naho the world’s most obvious romantic advice (“just hold hands with the poor guy!”) and pushes her to be more honest with them about everything from now on. Realizing that she’s always been stronger with The Gang at her back, Naho decides to tell them about the letter–and they take it in stride as easily as Suwa did, because they all have letters, too.

orange has been dropping hints about this for a while now (at least since we learned about Suwa’s letter), so it’s not all that surprising, and the series likewise handles it with casual matter-of-factness. The reveal itself doesn’t matter; what matters is how it affects Naho, as she realizes that not only does she have the help of the entire group, but that every one of them cared enough to send letters to their past selves. Naho and her friends are connected by bonds stretching across 10 years and splitting timelines. Knowing that is bound to give anyone more strength and confidence, but in the fluctuating uncertainty of high school, with the weight of a friend’s life in your hands? That feels like a downright miracle. 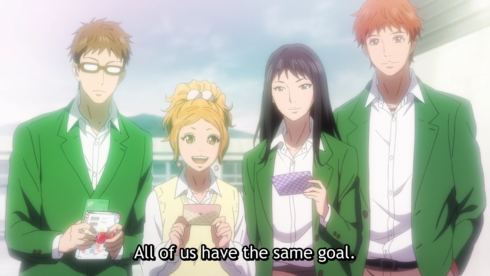 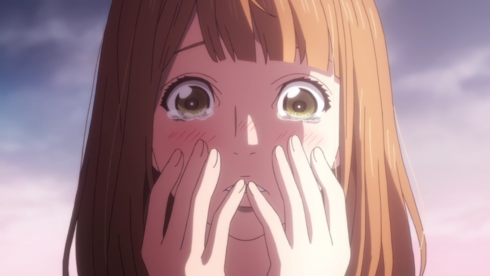 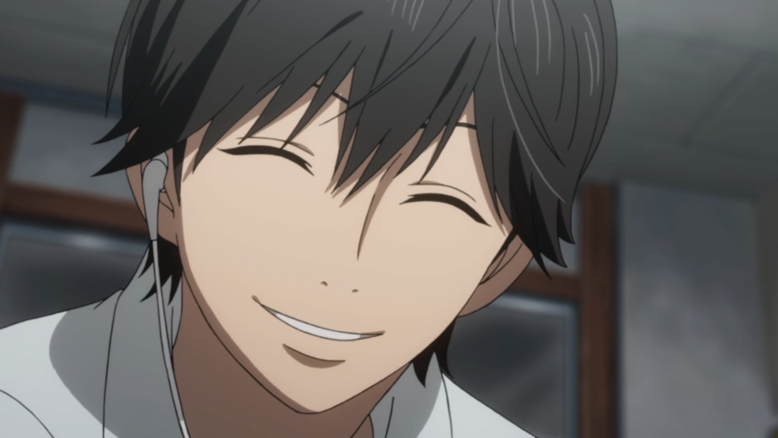