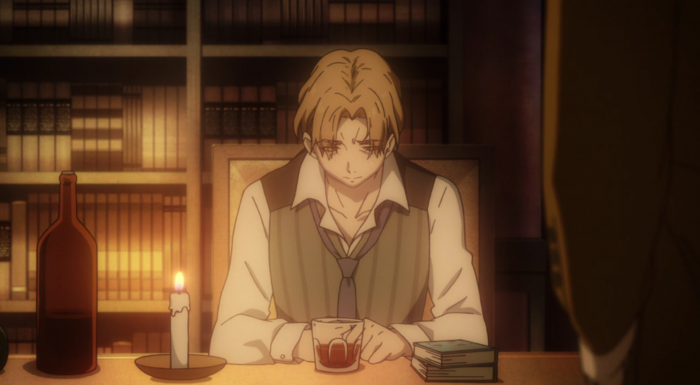 91 Days outdid itself this week, zeroing in on the Vanetti family feud in an episode packed to the rafters with layered characters, conflicts political and personal, and a tense, rapidfire chess match of scheming from the shadows. Most impressive of all? About half of it happens outside of the dialogue, through subtle (re)actions or off-screen entirely, leaving us with a snapshot of our cast that’s both dense and loaded with uncertainty.

I feel like I could write a small essay on just about everyone, to be honest, but for the sake of my typin’ hands and your readin’ eyes, let’s focus on a few main through lines: Families, puppetmasters, and dual (duel?) protagonists. 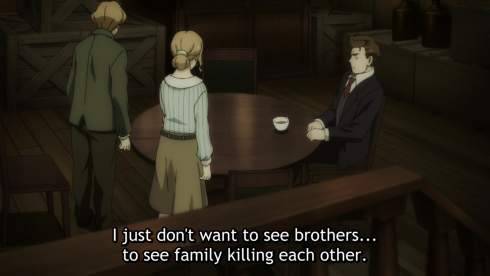 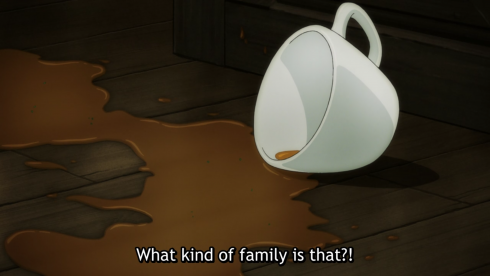 There’s an important linguistic shift that gets a little lost in translation, so I wanna go ahead and start with that, because it highlights the episode’s central conflict: The tension between the mob family and the blood family. Everyone’s been consistently using the English “family” to describe the Vanettis, but this week Fio joins the fray and pointedly uses the Japanese “kazoku,” only shifting to English when she snaps at Nero and Frate. “What family are you even talking about?!” she demands, and then shifts right back: “I don’t want to see brothers…to see kazoku killing each other.”

The family/kazoku divide is at the heart of this episode, because for many of our characters it’s a false divide, one they’re pretending exists to make their conflicts seem grand and epic instead of petty and intimate. Frate and Nero both talk about wanting to “protect the family,” but the longer they argue the clearer it is that Frate’s issue isn’t with the family’s future, but with his kazoku‘s past. It’s a prodigal son story, of sorts: The brother who always obeyed now feels taken for granted, resentful of the one who “did whatever he wanted” and still earned his father’s acknowledgment. 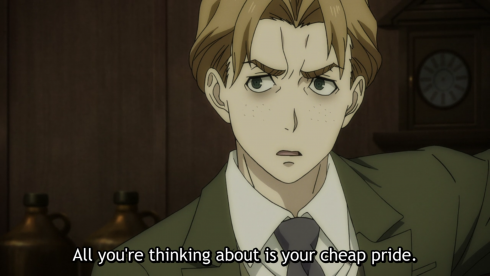 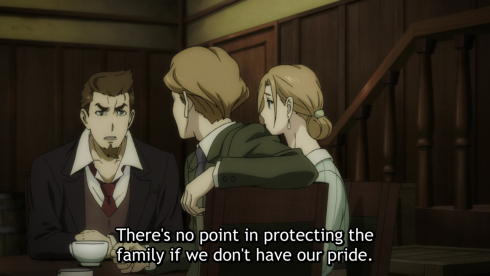 The fact that the Vanettis start a gang war essentially because “ daddy didn’t notice me” would be hilarious if so many people weren’t dying because of it, and it serves as just one more reminder that our cast of bootlegging gunslingers are all 21 and under, Frate the youngest of all. He feigns maturity with his arguments about pride and obedience and “the greater good,” but at the end of the day he’s a neglected, sulky teenager lashing out at the big brother he never felt respected him.

The older, cunning Ronaldo is only too happy to take advantage of that, showering Frate in compliments about how he’s “the only one” who can save the Vanettis, giving him the acknowledgment he craves, and getting him hooked on narcotics just to ensure his dependence. Frate is very literally addicted to Ronaldo and everything he provides, which makes him the perfect puppet for the Galassias. And the poor dumb kid actually thinks Ronaldo cares about him. 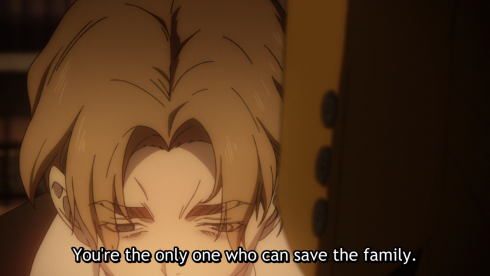 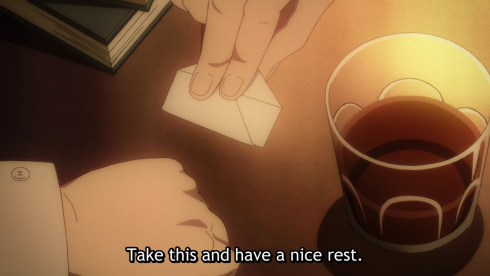 Caught in the middle is Fio, a character who’s seen all of 15 minutes total screen time but has more depth and breadth than a lot of main characters get in an entire series. While Frate uses “the family” as an excuse for his kazoku feud, and Nero naively tries to separate family tensions from kazoku ones, Fio’s focused on keeping her brothers alive and really doesn’t give a damn what happens to the family along the way.

And why would she? The family forced her into a political marriage, using her like a bargaining chip. And based on the tired, empty look in her eyes when Ronaldo encourages her to tell Nero about her pregnancy (for the sake of “the family,” not “the kazoku”), I’d say she’s the only Vanetti kid who’s painfully aware of her place on the chessboard and how little power she really has. 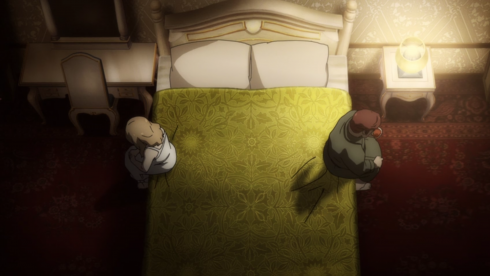 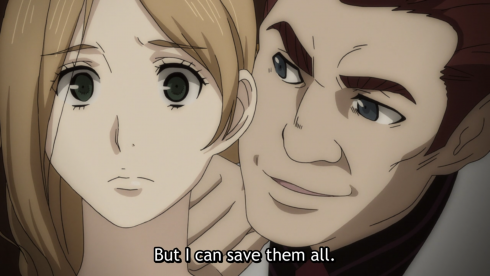 Yet Fio isn’t content to sit quietly and let others move her wherever they please. Her understanding of the game, her knowledge of her lack of power, allows her to exert at least some influence on, if not the family, then at least the kazoku. She pushes for her brothers to make peace (and would’ve succeeded if not for Angelo’s constant sabotages), and while both Ronaldo and Nero/Angelo do use her in their own games (and she knows damn well that they do), it’s still on her terms: Her goal is to protect her kazoku, and she consistently acts in ways that’ll make that happen. And if that means she has to kill her husband to keep him from killing her brother, then so be it.

It’s not easy to write a woman with agency in a setting where they historically had so little power, but 91 Days does a remarkable job with Fio. Right down to that glare she gives Angelo as she boards the train, Fio is no passive, ignorant child. All the Vanetti kids are puppets this week, but only she can see the strings. And she hates the family for creating them. 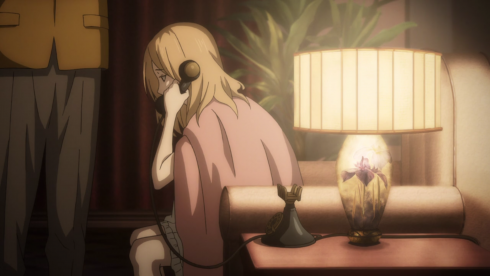 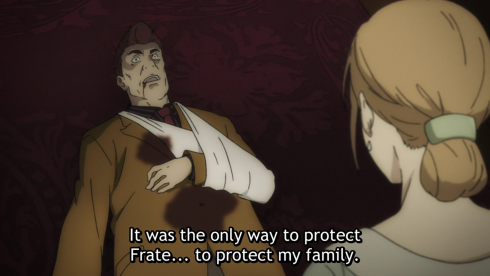 91 Days‘s story is based in deception and false faces, and that extends to its conflicts. The apparent fight this week may be between the Vanetti kids, but the actual fight is between Ronaldo and Angelo, who both use the Vanettis to further their own ends. The difference? Everyone knows Frate is Ronaldo’s puppet, but no one has any clue that Nero is Angelo’s.

Frate accuses Nero of hubris, and he certainly has a streak of stubbornness and pride in him, but the deeper we get into 91 Days the more I realize that if Nero’s going to have a “tragic flaw,” it’s not going to be his pride. It’s going to be that–just like his baby brother–Nero is far too easily influenced by the people he trusts.

Vanno suggests they go after Fango and Nero immediately agrees. Angelo hatches plans and Nero goes along with them. Fio scolds him for putting some abstract “family” above their actual kazoku, and in the very next scene he’s telling Angelo he’s going to make peace with Frate because “kazoku is more important than anything” (it’s the only time Nero uses kazoku instead of family all episode, by the way). And, when Nero isn’t listening to his sister, he’s listening to Angelo. Nero trusts him at every turn, and Angelo plays him like a fiddle, leading him straight down the road that ends in him killing his own brother. 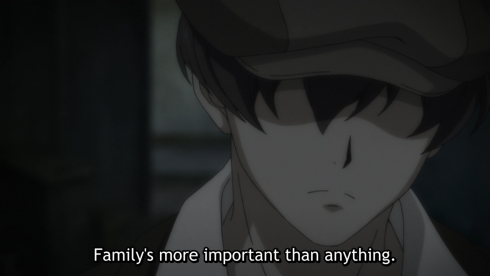 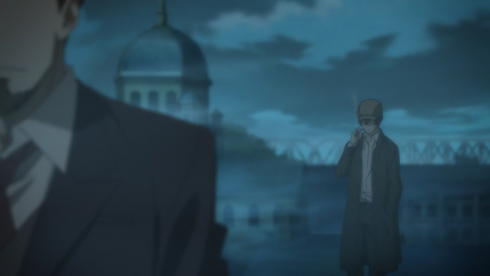 91 Days balances competing perspectives and writes its characters with such paradoxical nuance (e.g., Frate is simultaneously a lonely, manipulated kid and an entitled little shit) that I suspect there’ll be a lot of different gut-level emotional responses that’ll come out of it. Outside of my immense pity for Frate, what really surprised me about this episode was that, the longer it went on, the more I realized I’d started thinking of Nero as the protagonist and Angelo as the Iago-like villain plotting his downfall.

Given how damned charming they’ve made Nero and how little we get of Angelo–he barely talks and rarely emotes–I suspect this gradual shift was very intentional and utterly brilliant, turning 91 Days from a revenge fantasy into a story about how cycles of violence destroy everyone they touch. 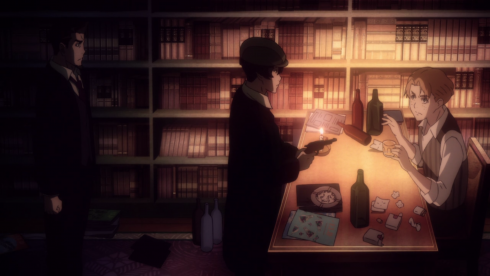 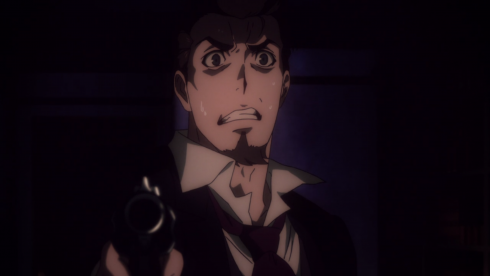 Because it’s not just that I  really like Nero. It’s also that I hate what’s happening to Angelo. He’s been on the edge of a breakdown since we met him, but there were still glimmers of someone warm and human before that we’ve stopped seeing as of late. Remember the kid who hesitated to shoot Fango, who went out of his way to make sure the “innocent” prostitute was unharmed, who stole Nero’s belt and screwed with a camp attendant? Yeah, that kid is gone.

Maybe he died last week, or maybe he died this week after Nero said “family is more important than anything” and Angelo burned with a cold fury we haven’t seen in a while. Angelo’s always hated the idea of the Vanettis and the tragedy they represent, but this week he hates the Vanettis themselves–for the family they still have, for the bonds they take for granted–and he’s ruthless in how he reacts to that. He systematically destroys the Vanetti kids this week, even the ones who had nothing to do with his family’s murder, leaving Nero isolated, grieving, and clinging to him even tighter. Before, Angelo’s revenge was “to the death.” Now it’s “to the pain.” And that’s a terrifying place for both Nero and Angelo to be. 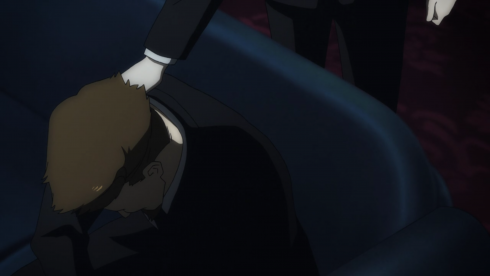 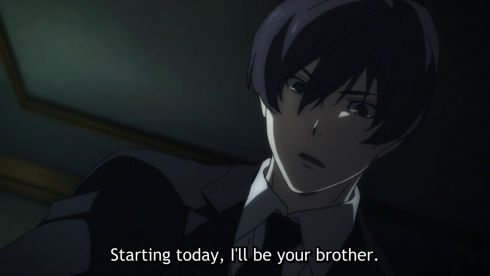