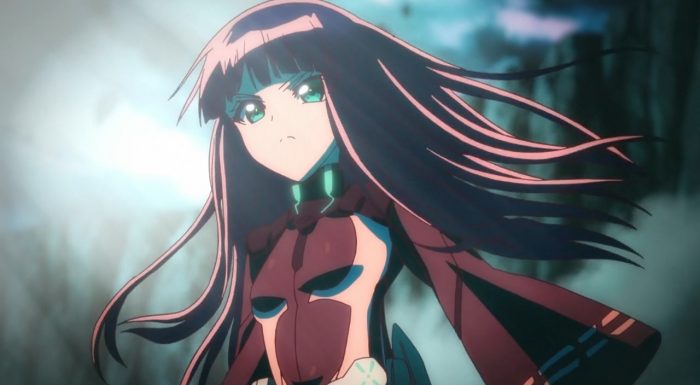 Well this fight certainly didn’t fail to live up to my expectations. I both expected to see some awesome moves by all parties and also how utterly difficult an opponent Yuto is. This fight isn’t even over yet, but what we saw showed the insane ceiling this guy has. It does make you wonder if it is possible to wipe him out even with a hit squad of the 12 Guardians. He has reached a level of power that is pretty darn difficult to believe. Of course it does show how far those two have come that they could force out a certain level of response from Yuto. Although it also shows how utterly powerful the guy is and frankly how far away both of them are from being able to beat him. The question really does seem to be whether they can force him to retreat or not. 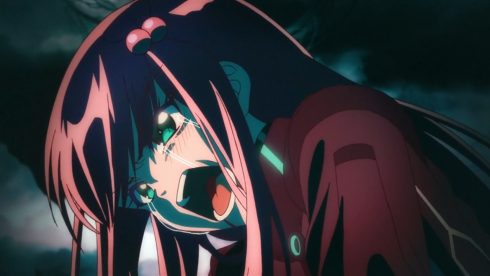 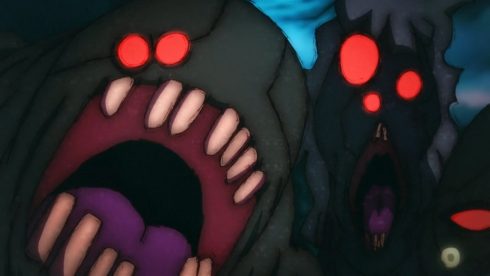 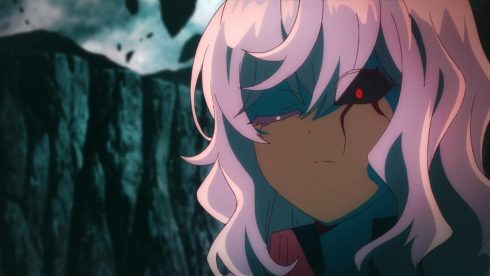 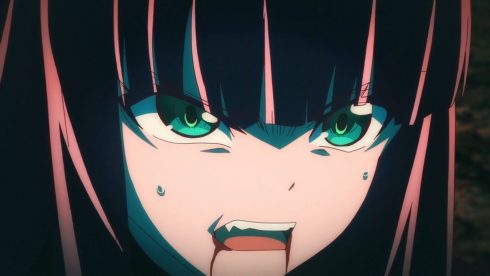 The one complaint I have is the whole “Benio Legs” scene. I do get that it is hard to show limb dismemberment in anime, but honestly it was hard to tell she actually lost even one leg until Kamui mentioned it! It seemed like a good possibility at the time. I mean Benio’s defense isn’t iron clad and she took a powerful attack to her legs from point blank. But, I do think a show needs to make it a bit more clear in that case. If you can’t show it….then have either Benio or Yuto immediately comment on it. It shouldn’t be hard to throw in a line of dialogue like “now that you’ve lost your legs, lay there and die” or something to that extent.

Still, a pretty insane development with Benio. Though in some ways it does make sense. Yuto is insane and frankly evil, but his logic has some value. Having the ability to manipulate both kinds of spell power should make one more powerful than simply having one or the other. So in that sense it is believable that at some point…Benio would actually lose something in order to get a kegare limb. Although in this case she is getting two instead of just one. I’d say that would give her an edge over Rokuro, but maybe not XD. In the end it would be more awkward to only have one super powerful leg rather than two. Kind of a necessity if you are going to go with leg replacements. 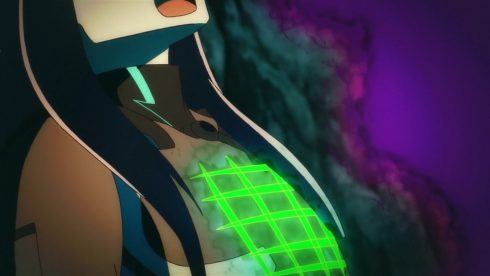 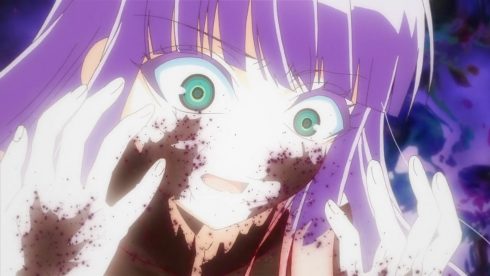 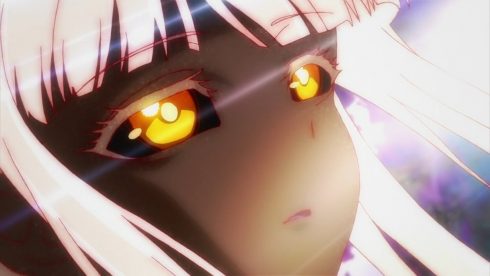 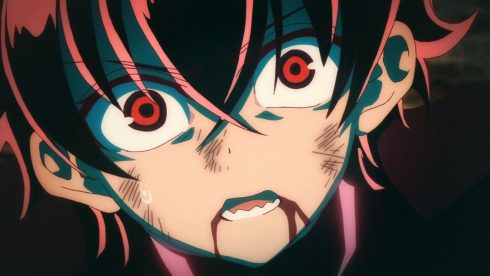 What I did really like was the moment for Benio. Being able to make that kind of bold choice when the time came for it. That is an incredibly tough position to be put in. Taking a potential power-up from an enemy is hardly easy or pleasant. The last person on the planet she wanted to accept help from would be Kamui. One of the people on the planet she wants to kill the most. Kamui made the options simple as usual. Accept help or don’t. I don’t even think this was one of those times when he was going to kill her himself if she refused, but rather just leave Benio to her fate. It was up to Benio to decide what mattered to her. Revenge? Pride? Survival? Rokuro? There was a lot of factors at play and in the end she decided to try and continue fighting alongside Rokuro.

It wasn’t like she had a lot of options. Even if help suddenly arrived, it wouldn’t matter much for Benio’s future. There is only so much a person can do without legs! Speed is Benio’s game and being unable to move around at all would utterly end her career as an onmyouji. I don’t think healing talismans can do much about dismemberment. Benio made her choice and I think did the right thing. And really I think it was worth it just for Yuto to look shocked. That the person he looked down on most in the world was also able to survive that. That Benio had whatever was necessary to avoid being killed by the corruption. 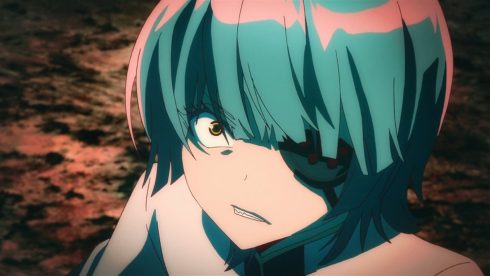 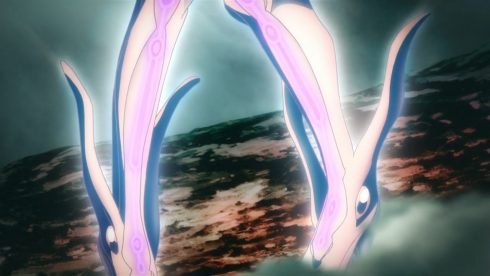 I will say that I didn’t expect that Benio would have to be corrupted for this to work. Of course not sure what I expected when it came to Benio needing new legs. That should have been a given from Rokuro’s flashback, but I didn’t quite piece that together. If I ever agree with Kamui on something it will be on his words at the end. Those new legs are a bit too beautiful to be considered corrupted XD. They are very bright and almost pure looking legs. I suppose that moment of revelation when Benio truly came to understand her feelings for Rokuro helped save her from being utterly destroyed. 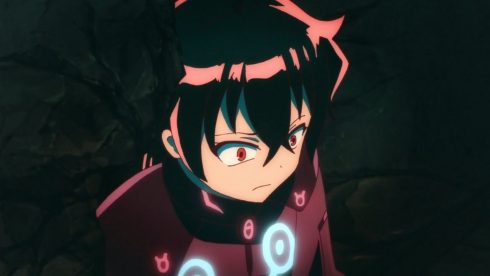 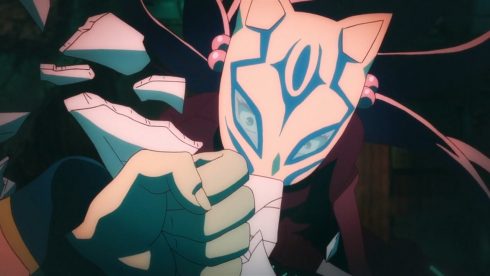 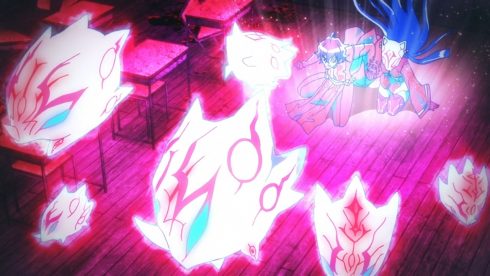 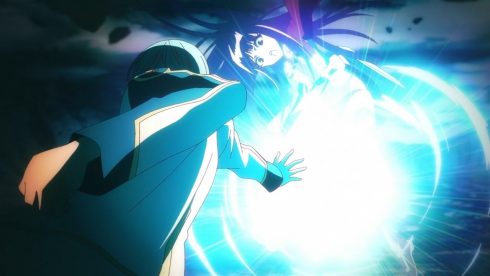 The fight itself against Yuto was both fun and unnerving. It was clear from the first moment that this guy outclassed them. I did enjoy seeing them get a few surprises in. Does still seem like Yuto is uninterested in the whole Twin Star business. He realizes they are using those skills, but doesn’t seem too interested. His focus remained completely on Rokuro throughout the fight. The only times he really put focus on Benio was to insult her, injure her, or rub salt in her wounds. Though I do think he was right in that continuing to wear those hairpieces showed that she hadn’t fully committed to killing Yuto.

I still really enjoy the visual style for the Twin Star attacks. The colouring and the intensity of their moves does make it something worth seeing. Though it is a bit frustrating for them that even that much resonance couldn’t do significant damage to Yuto. His ability to even temporarily turn his whole body into a kegare just makes him incredibly hard to deal with. He might not be able to hold that for long, but he can do it long enough to withstand major attacks. I’d love to imagine that he actually did use that form for an instant against Seigen if only to give that guy a bit of his pride back. Yuto defeating Seigen using a burst of his true strength would be more believable. 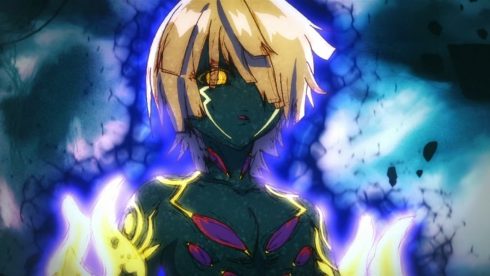 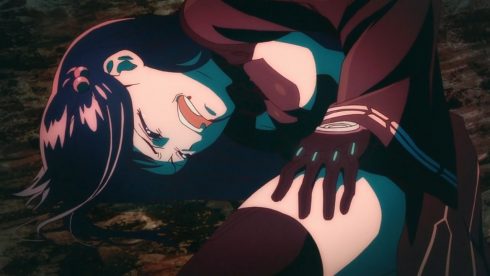 Hard to forget or ignore Rokuro’s efforts either. The new talisman was pretty darn awesome looking. It wasn’t enough to take down Yuto, but powered up by resonance did make it pretty insane. That attacked forced Yuto to get serious. If Rokuro just has more time to master that power and continue to develop then you’d have to imagine he can get closer and closer to Yuto. But, it hardly seems like the kind of gap that can be closed in this fight. Even if Benio joins back in with power it will only bring her to the point where Rokuro (who is already beaten down) currently resides. At least her power-up should get Yuto’s attention. 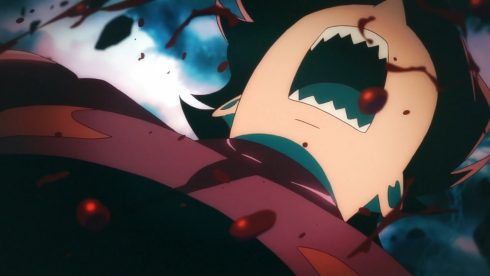 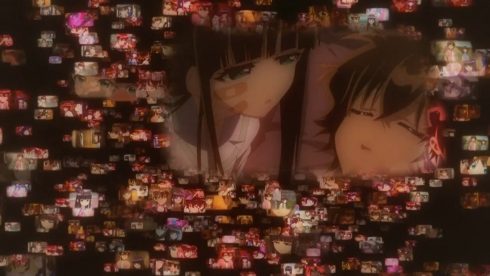 I really did have a blast with this episode. The action was fun to me to watch and the character side was also good. We now know that Yuto’s goal is even more horrifying than one could imagine. His intention to absolutely massacre every onmyouji in the country (and somehow I can’t imagine he’ll stay cooped up in Japan forever). Yuto’s hit list is rather long and he won’t stop until he gains all the power he can. Can’t wait to see what Benio can do with her new legs, though I won’t have expectations beyond belief. She is just catching up and even an immediate boost probably isn’t going let her kill Yuto.