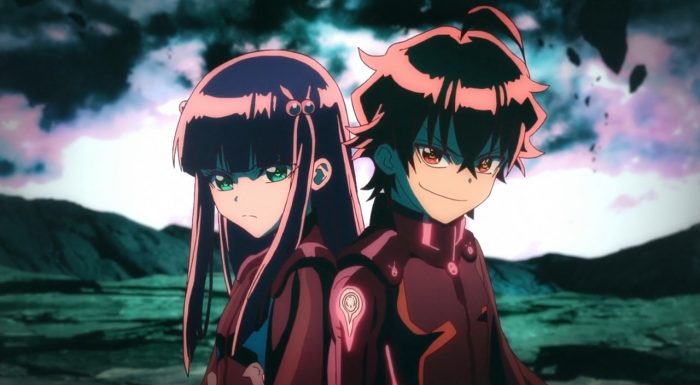 This was a pretty good “calm before the storm” episode. A chance for Rokuro and Benio to gather their courage and determination before going to face Yuto. While I wouldn’t have minded just jumping into it, this was the smarter decision. Time was needed to both further flesh out Rokuro’s backstory and also prepare these two for a life or death struggle. There is nothing simple or easy about what they are about to do. It’s basically a suicide mission in terms of their chances of success. But, it is something they feel necessary to take on. Yuto has done too many horrible things that they can’t just sit by and have someone else clean this up. Stopping him from further acts and punishing him for what he’s already done is what they are out for. It’s just a terrifying thing, since he is basically a monster. 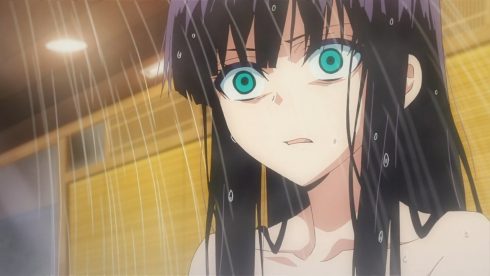 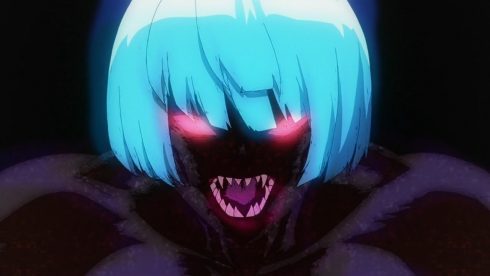 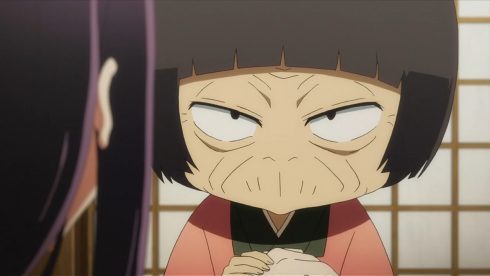 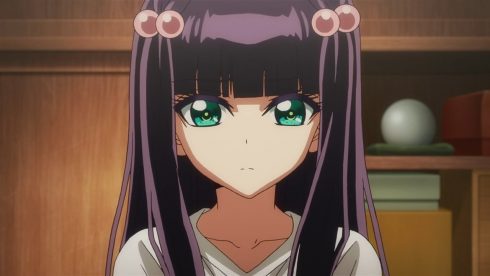 Understandable that they both had fears and concerns. For Benio this is all the more painful because her brother has turned into a monster here. One that cares nothing about his family and utterly looks down on her at any opportunity. Benio understandably didn’t want to show that level of weakness to Rokuro. Turning instead to “Granny” for a chance at calming her nerves. There are times you want to show weakness to those closest to you and times when you don’t. Wanting to appear at your strongest with those you care about most is understandable. In this case Granny was someone she was willing to turn to. And she did get good advice. Running isn’t always the wrong thing to do. Sometimes it is absolutely proper and reasonable. The key thing is to try to avoid too many regrets. Getting buried in those will just drown you. 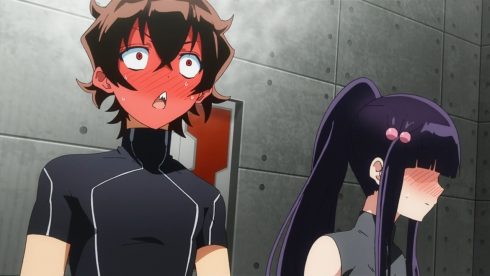 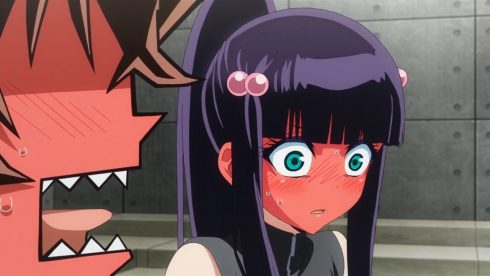 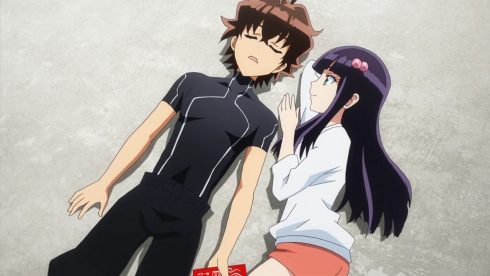 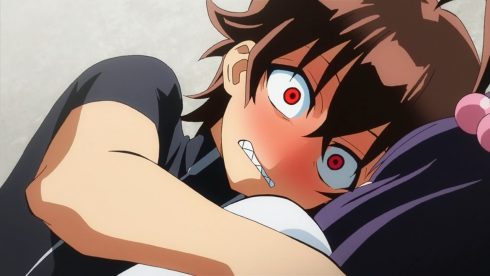 It shows how close these two have gotten and the trust built up. Not being pushed at each other, but instead finding their own reasons to stand together. Both rather feeling saved by the other being there. It’s easy to talk tough, but I don’t think either of them would have been able to do much by going it alone here. Rokuro might have gone to face Yuto alone, but his fear might have worn him out before he could do anything. Both of them are getting things figured out. Not that it isn’t causing them trouble in other ways. Both getting rather flustered when realizing how much physical contract they’ve been making XD. Not exactly used to holding hands, but it is a key part of their battle plan.

I suppose the most focus on that front still rests with Benio. The first one to get nervous and also to naturally grow closer to Rokuro. Even falling asleep while watching him sleep. Although she still gets the luxury of making it out to be his fault XD. Not sure even she realizes that she’s fallen for him yet, but there is plenty of time for that. Presuming of course that they don’t get killed here. 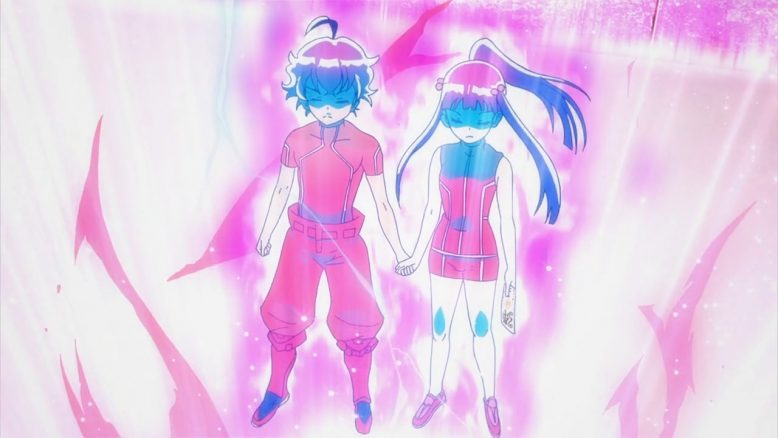 The idea of actually practicing resonance is a good one! Heck, I’m kind of surprised they didn’t think to test out this power-up they found a while ago. Figuring out the limitations and usage is a good idea. In a sense it basically doesn’t have many limits outside of their stamina. That is about it. So long as they can stay focused with the same will and goal it is possible to activate resonance. Just about pacing themselves so they don’t burn out. Although against Yuto there really isn’t much they can do except for going all out.

What is beneficial is the power-up that Rokuro was given by Seigen. I guess this red one allows him to make more use of the kegare power in that arm of his. Of course there has to be major risks to doing that. Losing control of his arm would basically cause nothing but tragedy. If he can control it then it’s a useful power-up. All up to Rokuro in that case. So at least he has something that can do some real damage in a pinch. 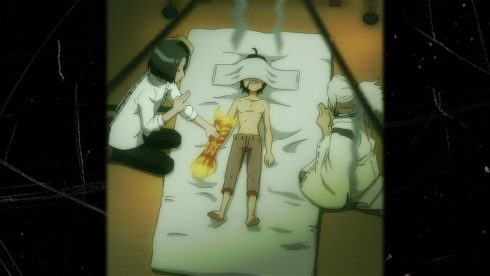 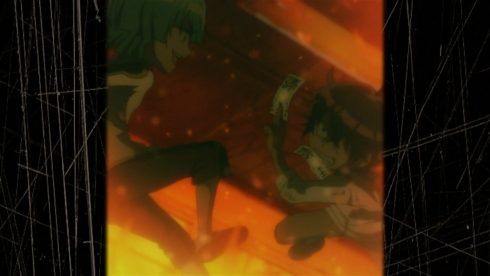 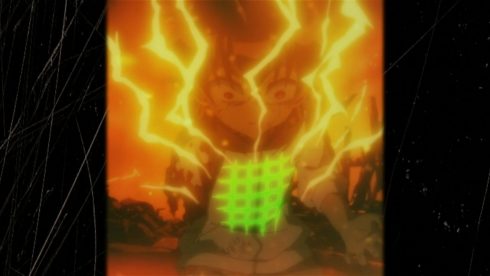 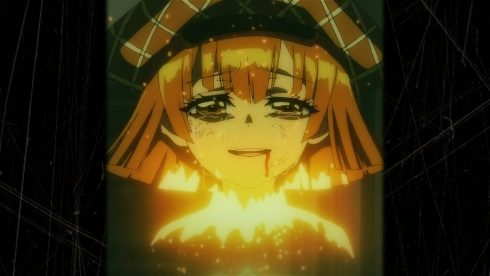 This was also a chance to dive into Rokuro’s past a little bit more. Finally after 18 episodes the opening scene makes perfect sense. I did presume that his arm wasn’t a normal human arm, but it was nice to finally get confirmation. That he did lose his arm in that incident. Getting his arm eaten by his friends who had been turned into monsters…..which is unsettling. Then going after Yuto in a badass way with only one arm. He didn’t win like that, but still pretty cool.

Is surprising that he managed to survive the kegare corruption as a kid. A lot of decent onmyouji weren’t able to pull that off. I suppose Yuto did it to himself as well and thus why he has that arm now. But, leaves me curious why Rokuro survived? Is it just because he lost an arm first? Because he’s one of the twin stars? I hope we’ll find out eventually.

Understandable how Rokuro just wasn’t able to stand and move forward after that incident. He lost his friends, had his arm eaten, killed ones that hadn’t turned yet to save them from that, and had this kegare arm replace his old one. That’s a lot of stuff to carry on your shoulders. And credit to Benio who is the reason he could stand up and find his way forward again. By himself it just wouldn’t have ever happened. And honestly he might have been killed by Yuto at some point when he got bored of the life Rokuro was living. 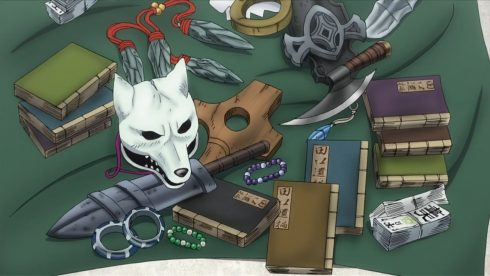 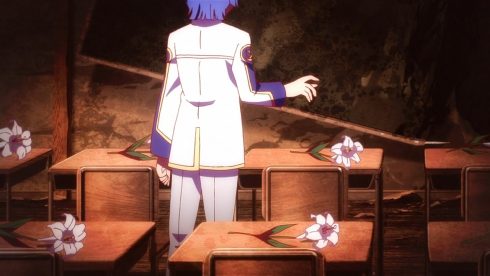 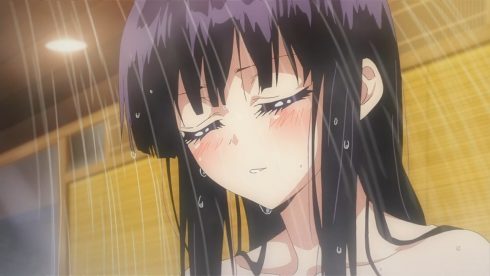 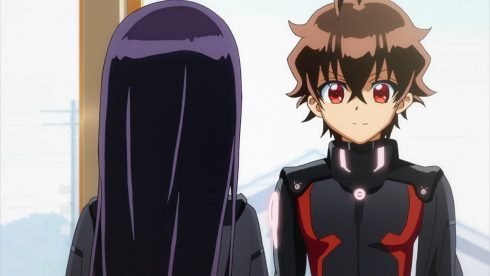 Now we’re all set up for this big showdown with Yuto. It’s going to be one heck of a dangerous battle. This guy is willing to do any kind of horrible thing and that could make it even harder to survive this. Yuto has no sense of morality nor sympathy for the lives of others. They need to beat him into the ground before he can do anything. Not that this will be easy at all. Yuto’s strength is on a level that I’m not sure even resonance can cover for. I will just hope for the best and wait for next week.