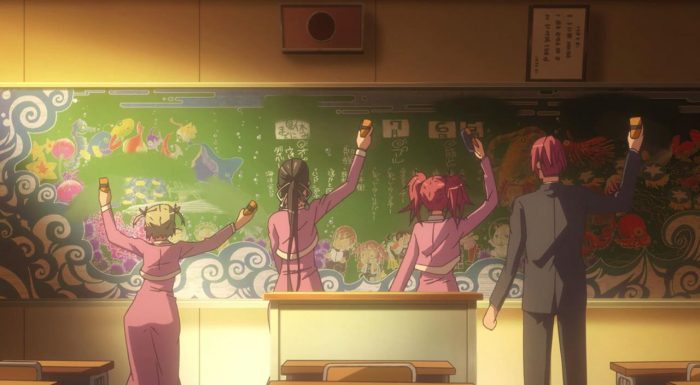 With this episode some of the other major cast members of this series were introduced and brought with them a fresh storm of sorts in the the person of Ai, the older sister (by just a little bit) of the two we encountered in the previous episode on the beach. Ai and Makoto (Ninomiya is their surname) turn out to be twins and while while both of them seem quite good-hearted they have many differences even at first glance. Makoto is definitely is the more level headed of the two Ai is the more  passioniate, impulsive, intense and … well … she is like a storm out at sea. 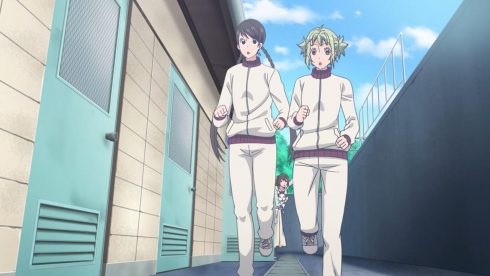 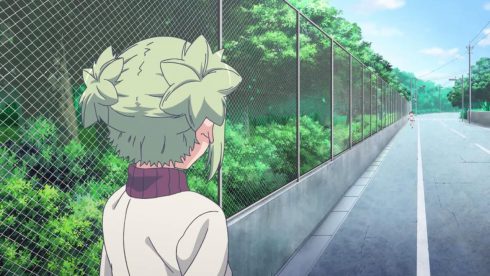 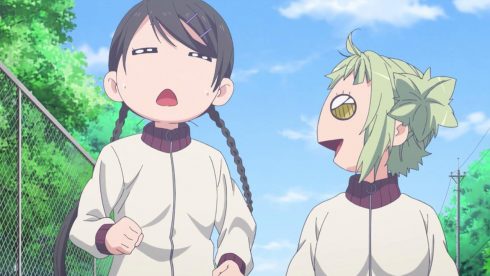 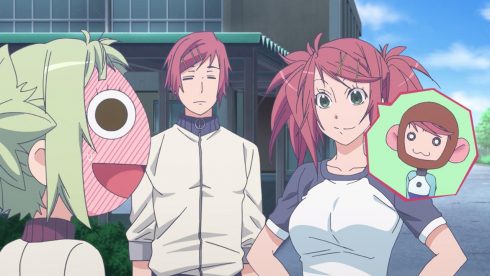 As for the events of the episode itself it seems as if the the pool is shared by many clubs at the same time, which makes sense and is likely one of the tasks of the teacher advisors – that is, juggling schedules for use of the facilities and helping to arrange the weekly activities of a particular club (no doubt it varies from advisor to advisor). The swimming club seems to be using the outdoor pool for preparation of an upcoming match (I wonder if this implies there is an indoor pool that might be being used by other clubs?), so a decision is made to spend the time training basic strength and stamina and focusing on the basics. 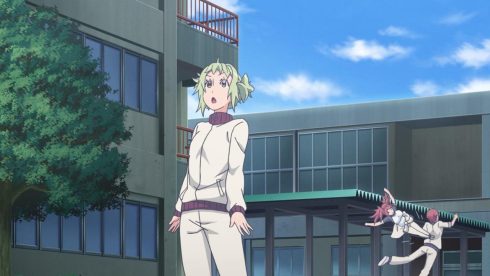 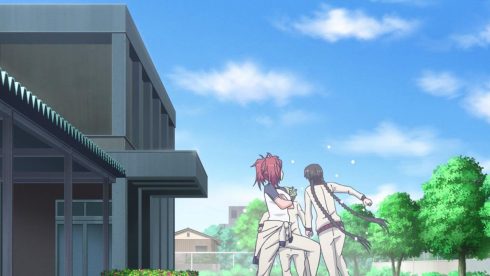 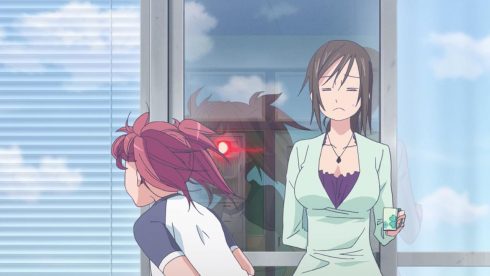 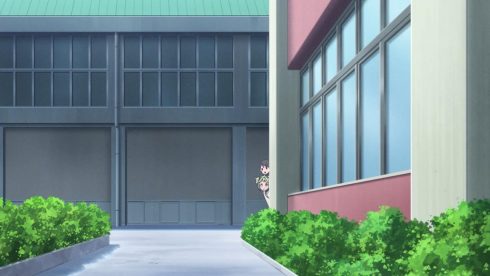 This is primarily for Teko, of course, who begins the episode literally shaking from using muscles to a degree she had not before in the previous episode’s pool practice, but going over the basics and focusing on training never hurts for refresher for other members of the club, and Pikari is all for it, of course. While out on their running laps Pikari is encouraged to go on ahead by Teko, and when the former does so it just so happens that she passes by the two she had gone diving with in the previous episode, who are also jogging and training.

In the course of the conversation Pikari picks up that these two are the other members of the diving club, and more than that … that Ai is extremely indignant at whoever it was that “invaded” the club room outside of the official times and used the diving suits; indignant to the point of threatening physical violence. 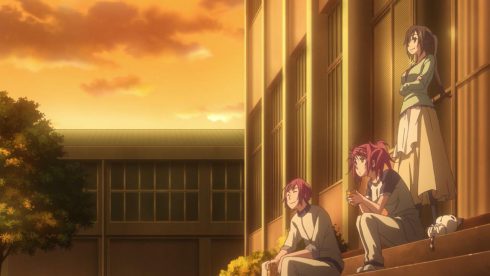 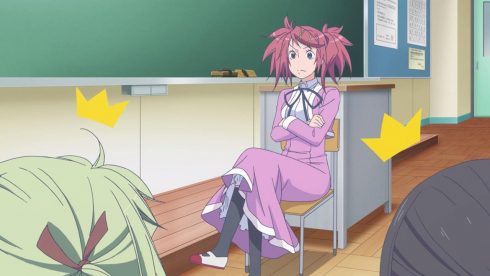 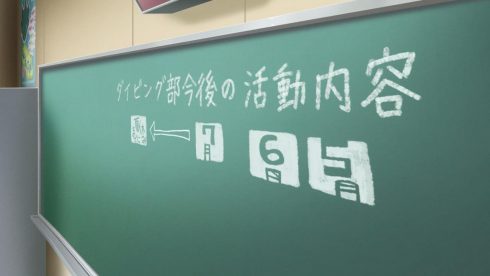 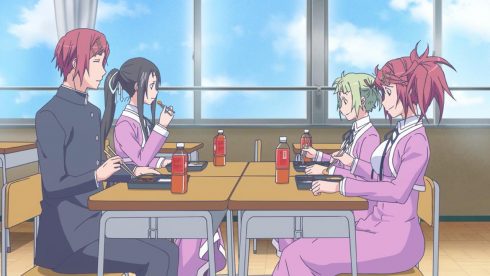 This, unfortunately, is our first extensive introduction to Ai as a character, and unfortunately for a fair number of viewers she did not make a very good first impression – perhaps understandably. Without going into any spoilers or details I can only offer a few comparative notes. Last season during Flying Witch J.C. Staff adapted only about 16-18 chapters of the manga, picking and choosing in a re-arrangement of the source material to drive points home as they saw fit. At the moment there are less than 30 chapters released of the series proper. Now a similar approach is being taken to Amachu this season thus far, but a difference is that there exists about 50 chapters of the series itself, and with this there is a lot more material in terms of material to go into details about the characters proper. It will be very interesting to see what the studio will do in terms of the Ninomiya twins and development in the limited amount of time they have with one cour.

Thankfully the passionate and impulsive nature of Ai is just as quick to forgive as she is to get angry, and after Pikari and Teko disarm Ai’s tunnel vision with sincerely apologizing she seems to return to a state of “semi-normalcy” and interacts with the new members of the school’s diving club in a welcoming and even responsible way, helping to arrange for plans and short term goals for the club – and in particular for Teko shooting for a license by which she could go deep sea diving with them all. 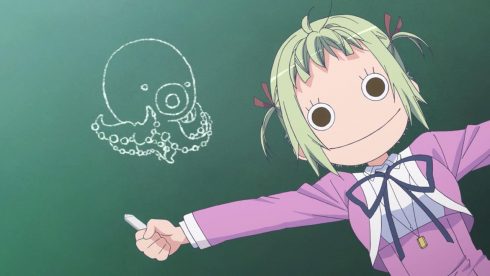 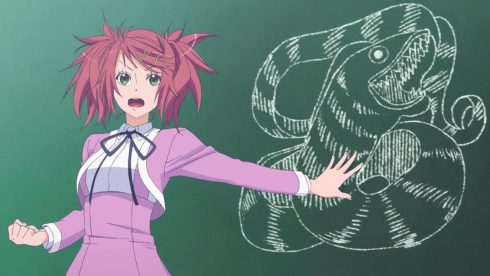 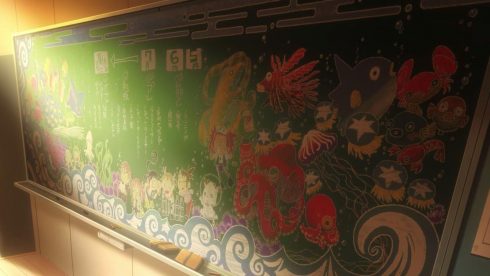 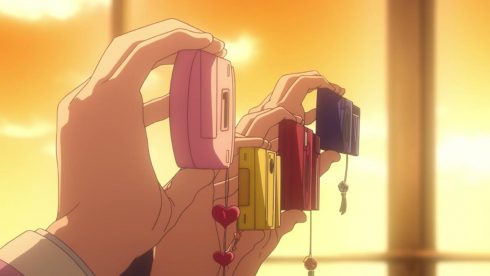 It is then that the last minutes of the episode come upon the viewer and Pikari catalysts a mode of behavior out of Ai (she can draw!) and brings out her playful, childlike and cute competitive side. The end result is a colored chalk extravaganza unleashed on the chalk board in the classroom they are all in at the moment. Makoto has no problem immediately melding in with everyone else, and eventually Teko is dragged into the flow of things as well. The end result is quite lovely, actually, and at Teko’s suggestion everyone take a pic of it with their cell phones before erasing it and wrapping the day up.

Now this moment of taking the pic with the cell phones actually dovetails into a character development mini-arc for Teko in the manga, and I would not at all be surprised if they were to adapt it in one of the future episodes, so no spoilers here regarding that. However, since we are on the subject of future content it looks as if the next episode will indeed combine two separate chapters earlier in the manga’s chronology into one, and I must admit that it does not seem out of place at all.