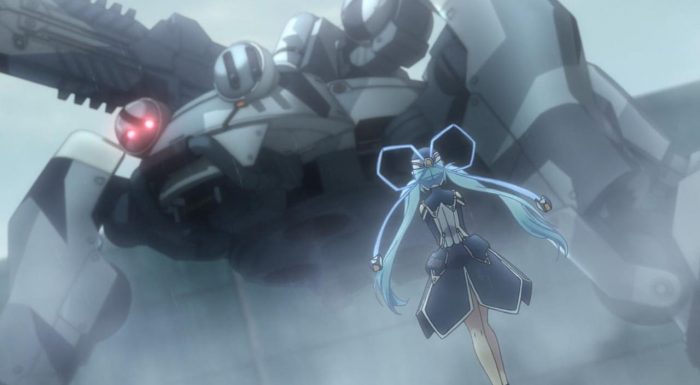 One of the most interesting things for me while following this excellent, excellent series has been seeing how some of the Key fans (a notoriously difficult group) and how some of those who have already finished the virtual novel proper have regarded the adaptation. Almost uniformly, across the board, from many, many different sorts of viewers the reaction has been a positive one. And to anyone who has been exposed to anime fandom (in any language) such a reaction to a virtual novel adaptation is rarer than hen’s teeth. 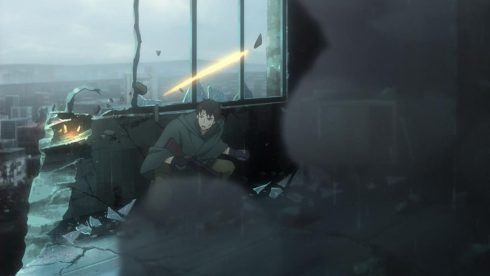 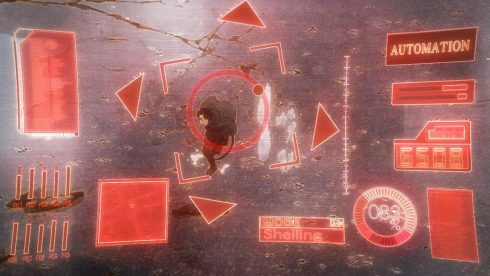 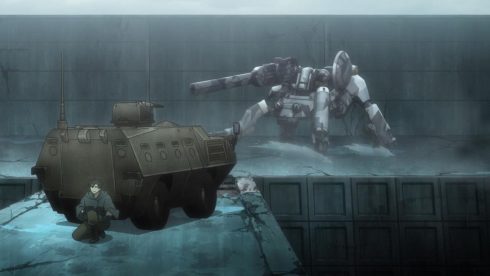 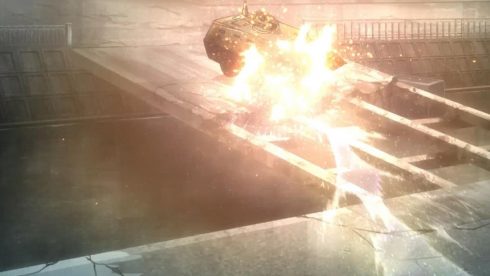 This episode concluded pretty much as expected … on a rather sad note. Yumemi, following her programming principles, goes forth to confront the robot fighting with the Junker to try and protect a human being and … gets not only gunned down but literally torn in half by the bullets! O.O Even if we knew that Yumemi’s days were likely numbered from the lack of a power source to recharge her, and even if we knew that there were barely any humans around who she could serve and share her planetarium presentations with any more, to get ripped in half was … not the sort of end many not familiar with the source material were expecting her to receive. 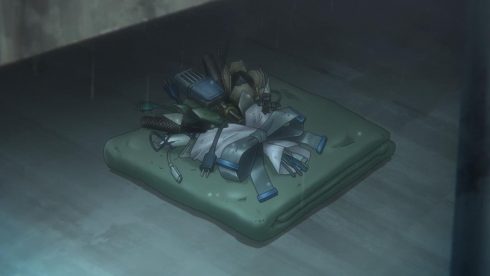 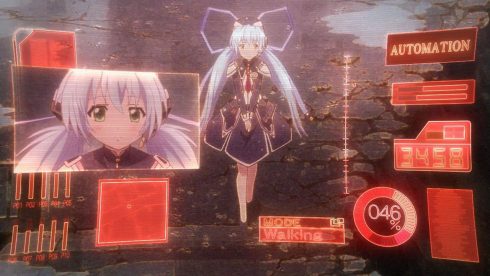 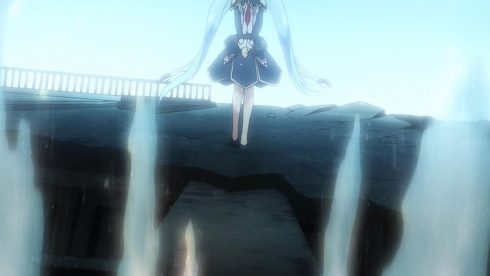 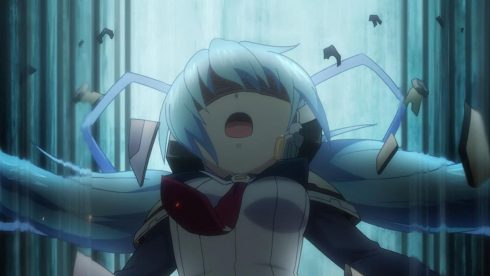 Yumemi’s final scene of parting with the Junker really does hit hard … really, really hard … and on so many levels. Yumemi has noticed while out and about with the Junker that everything is definitely not as it should be (the ruined buildings, the lack of people, etc.) and the fact that she cannot connect to any databases at all after repeatedly trying puzzles her. While she knows something might be amiss it does not make sense to her and she is aware of the fact that it does not make sense to her. (Advanced programming there!) 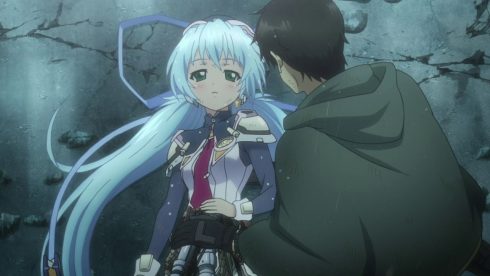 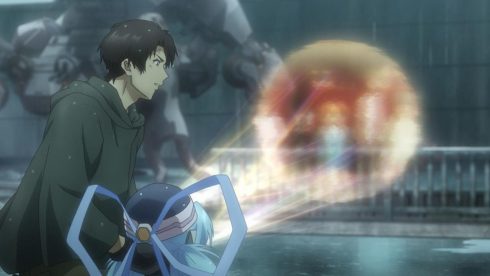 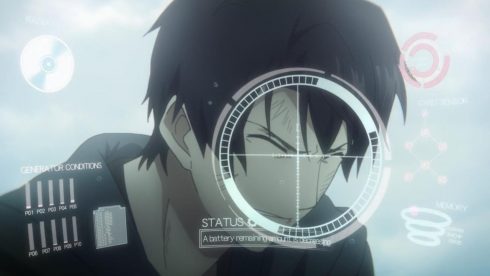 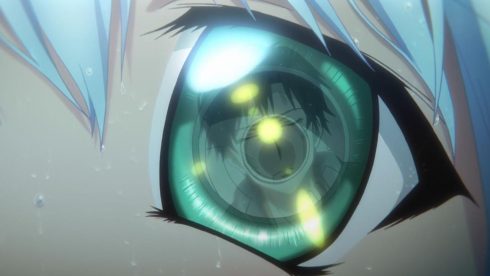 In the midst of it all, however, we see that there is a small sliver of hope. In the midst of Yumemi showing a little puzzlement at the Junker’s tears and sadness, she reveals to the Junker about the presence of a removable memory card (of 128 exabytes?! for those who do not know 1 exabyte equals 100 terabytes) containing everything she has recorded – all of her “memories”. After Yumemi’s batteries finally run out and she is no longer able to function she finally loses power in an agonizing scene (at least I was crying) and the Junker takes the card and heads out through the hole in the wall … they were both sooooo close to the exit! 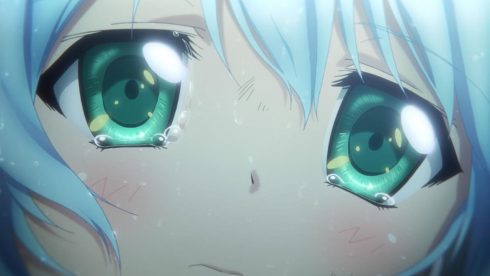 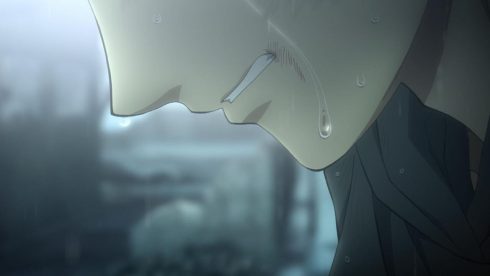 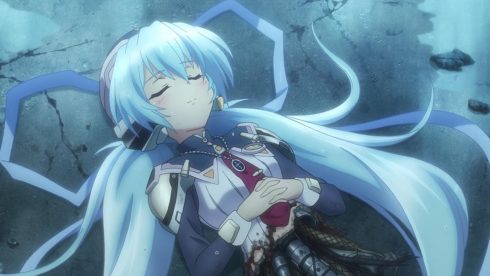 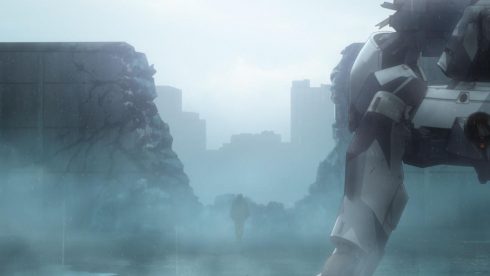 Some have pointed out that all the OVAs together make up the length of some anime movies out there, and have also emphasized that the conclusion to these episodes will be in another movie named “Planetarian – Hoshi no Hito” airing in early September of this year … for which the PV trailer has already come out. If the anime were roughly the same length as these 5 OVA eps you would roughly have a 10 ep series adaptation for Planetarian! And in my book, if the first half (now completed) is any indication, that is a very good adaptation the series received. And to be honest, after watching this beautiful, moving and touching OVA series I am very, very glad it received such a good adaptation and was received so well by so many.

I will likely be going into more about the series with the overall review AFTER the movie (I feel the two of them go together far too well) but for now I really have nothing but praise to offer to David Productions studio for the excellent, excellent work they did with these OVAs. Almost everything – the animation, the soundtrack, the voice acting, was all quite good in my opinion. It definitely takes its place as one of the best series of the Summer 2016 season for me.

For those interested, here is the pv for the movie. Enjoy! https://youtu.be/I2u_ZOS00uI