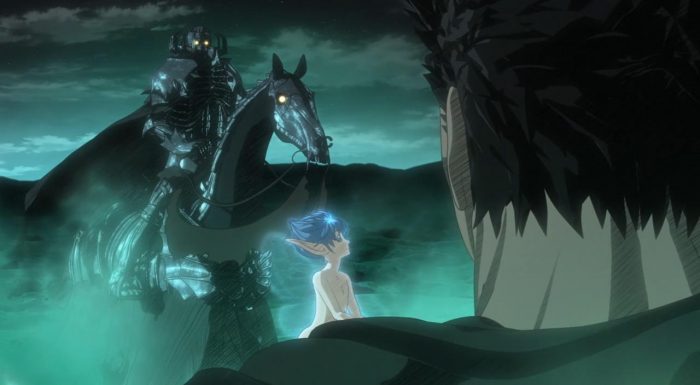 Its kind of amazing how slow Berserk has become, and how carefully it treads, now that its arrived at the story arc that it so desperately wanted to get to. There are some interesting choices made this week, including certain scenes that I personally wouldn’t have touched with a ten foot pole. What this week’s episode does manage to do, however, is still keep the spirit of the source material very much alive, while avoiding an exact, panel for panel adaptation at the same time. 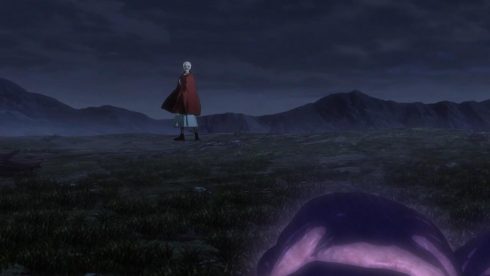 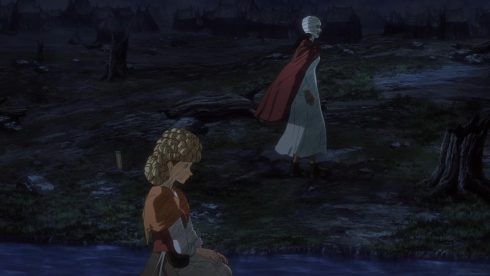 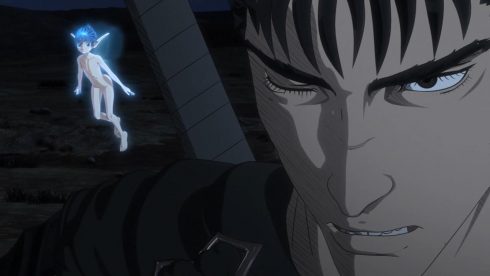 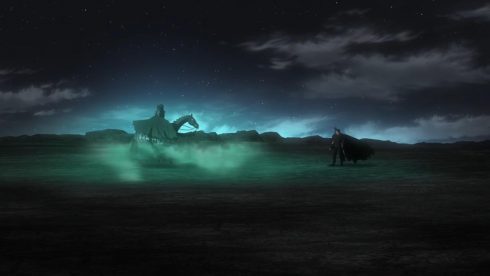 I suppose the major headline this week is that this week’s episode is yet another setup/transitional episode. Gutts still hasn’t made it to where Casca is at the moment, and his big thing this week is a reunion with the Skull Armour Horseman (for lack of a better name at the moment). If you’ve seen the movies or read the manga, then this character’s arrive will probably be pretty significant to you. If you’re one of those people who’ve only seen the original 1990s anime series, however, then its safe to say that this week’s episode was really your first real introduction to this particular character.

So… For those of you new to this character, lets do a quick recap. After Gutts and Casca manage to escape the Festival of the Hunt (The Eclipse) without being actually sacrificed, its the Skull Armor Horseman here, that actually both leads them to safety, and gives Gutts a very basic lowdown of his situation and life from that point on. And that’s the last Gutts actually sees of him. Ever since that night, Gutts hasn’t really seen the Horseman at all. And now, after two years, both Gutts (a branded sacrifice) and the Horseman (an opponent to the ethereal, as he himself puts it) are meeting again. What that is, is a sign of something very world altering, about to happen. 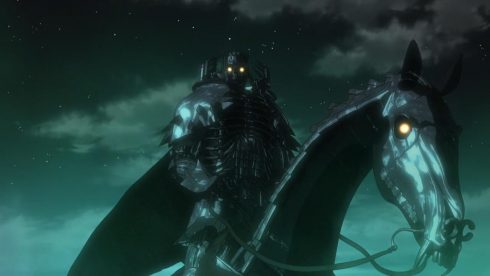 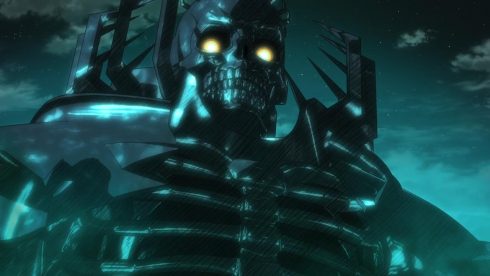 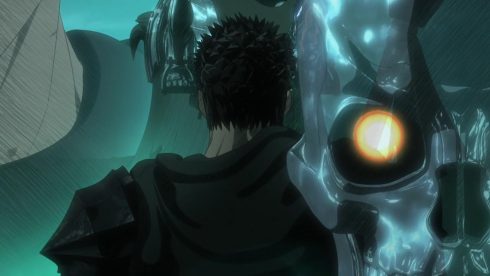 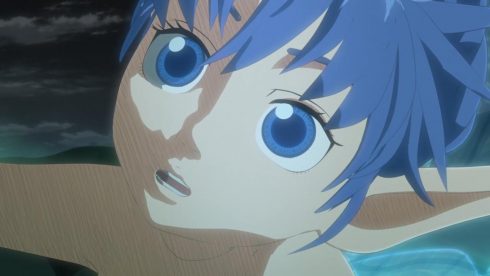 The other super important thing to note, is the “joy” that Puck detects in Gutts, when our leading man finds out about this very idea. The joy is I think, is a big sign and an indicator of what Gutts is hoping for right now. He’s aching for a chance to take on and redo the situation that caused him so much despair. There’s an urge, and desire to do things right this time, and to see if all the power and strength he’s amassed in the last two years actually makes a difference.

But While Gutts is inching ever closer to where Casca is, he’s obviously not quite there yet. The majority of this episode, in turn, actually focuses on the world building that this series seems to have a real knack for. Once again, this show outlines just how dark, grim and utterly deplorable the world of Berserk really is. There’s the dominant religion of the era, the Holy See, which continues to make things uneasy for everyone even remotely involved with it. The religion itself seems to focus on masochism, herding of the masses into a blind faith and controlling the majority for the “chosen” select few’s benefit. 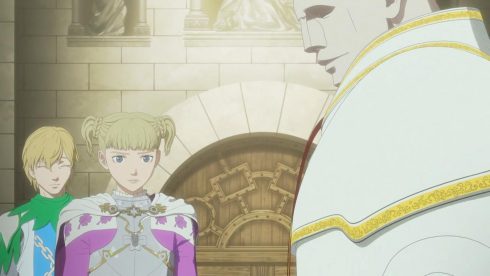 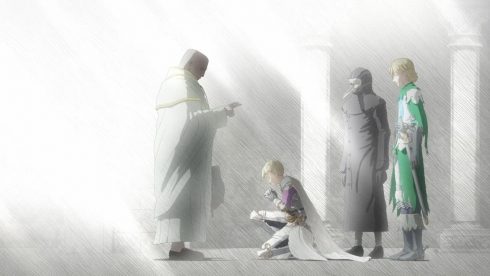 People like Farnese, are in the clear, for the moment. Farnese is, at this point, following whatever twisted brand of justice that the High Inquisitor “Mozgus” seems to be preaching. And everything that Mozgus is calling for, is twisted, contradictory and messed up to say the least. The one caveat to all of that, I guess, is that Mozgus isn’t a hypocrite. Despite whatever psychotic and sociopathic leanings the guy has, he practices what he preaches. That whole moment with Mozgus “prostrating” himself a thousand times, is a horrific scene that’s supposed to highlight two very important things.

One, He clearly belongs in a insane asylum, and two, that he’s kind of a very strong and resilient dude, and a bit of a monster. To make matters worse, despite the fact that the guy is supposed to represent order and fairness, what he actually represents is utter and completely chaos and randomness. There’s no telling what he might do, or when you might find yourself doing something that he may deem “unfaithful” and ruin your life for it. 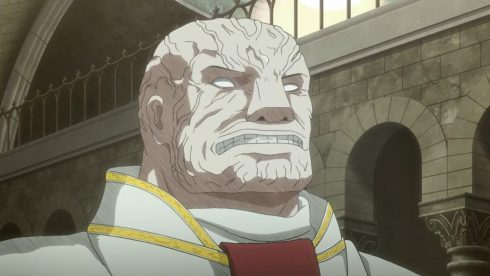 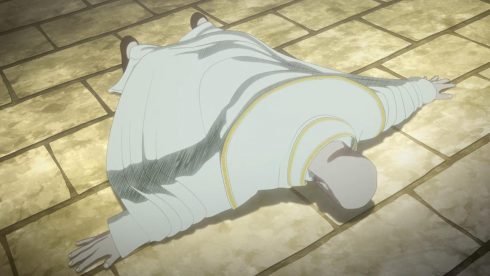 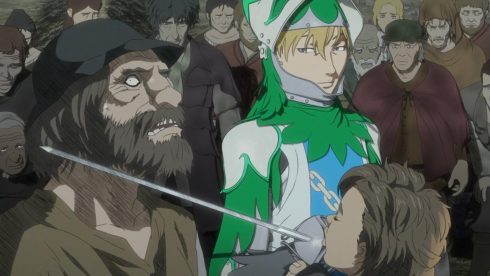 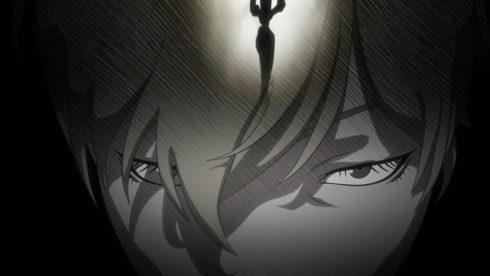 But as much as the series continues to double down on the idea of the High Inquistor’s fairly obvious isanity, there’s also a deeper dive into both Farnese and Serpico this week as well. There’s the rather big revelation that both Serpico and Farnese lost their mothers in a rather tragic way – By seeing them burned at the stake, at a very young age. The major difference, however, between Serpico and Farnese it seems, is that Serpico clearly turned against the unjust world that let this happen, whereas Farnese was basically broken down by it. She, in her inherent weakness, become a part of the corrupt world order that resulted in all her pain and problems.

Farnese’s own little private moment of remembering how she caved into the monumental pressure as a child, and piled in on the fire that burned an innocent woman (Edited thanks to GrayLurker’s comments below), is horrific. Its also very eye opening, because it explains pretty aptly why Farnese is as  broken and messed up as she is. There’s guilt here, and its mixed with discomfort and a lack of acceptance of reality itself. 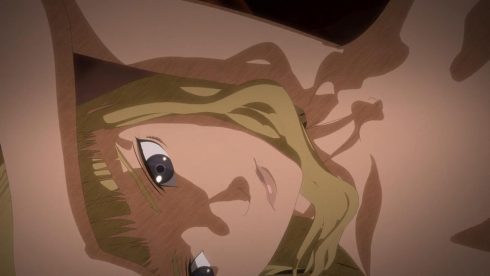 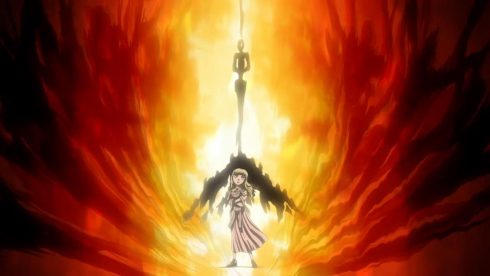 There’s also an element of tragedy to it all. Yes, Farnese isn’t at fault for what she did as a child, but its that very moment that put her on the path to doing horrible things as an adult. Of course, with an upbringing like that, born in a world as twisted as Berserk’s, who can really say if she had any choice in the matter? That… I think, is the very crux of her character and her character arc as a whole.

Will Farnese ever realize how many atrocities she’s committed in the name of “faith”? Will it even matter if she does? That’s the big question here, and one that’s sure to play into the grand scheme of whatever it is that’s going to go down in this refugee ridden area. One thing’s for sure, with the amount of players and entities gathering, and the demons lurking about, something terrible is afoot. 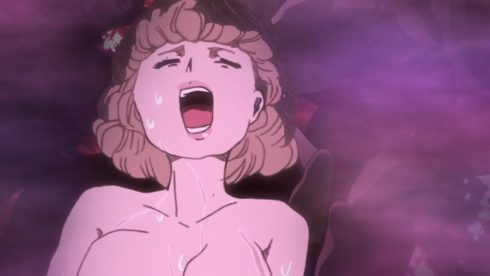 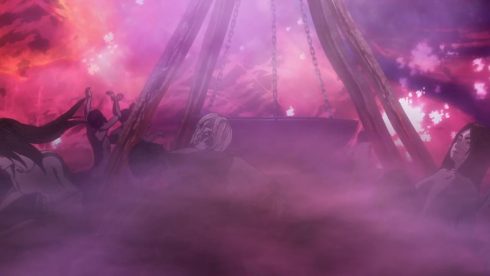 One of Kentaro Miura’s signature tactics in Berserk, is to really spell out something with an utterly shocking and extremely graphic visual scene. The whole orgy scene in the manga, and its less extreme version in the anime, is just supposed to provide depth to the whole “this world is utterly broken” idea. See, while Farnese is questioning whether what the Holy See is doing is actually right, and being persuaded to ignore her rather accurate instincts, there are people hiding in the same area,  and doing some rather extreme things to try and cope with the horrors that they’re facing. 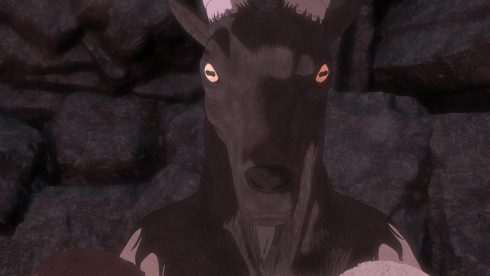 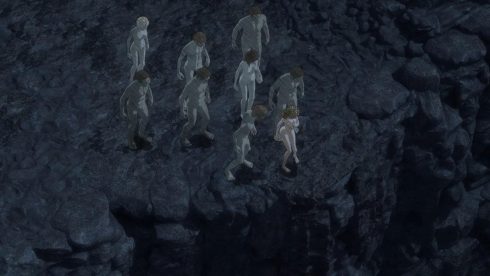 The orgy, the hallucinogens, its all meant to show that these people are so forgone, so broken, that all they can do is try and lose themselves in the drugs and the sex. Is this scene entirely necessary? Probably not, and I didn’t think it was when I saw it in the manga. But it is what it is, and again, I won’t make any apologies for Berserk and how adult and mature this story can be. Berserk is as subtle as a jackhammer straight to the head, and that’s just kind of part of this franchise’s DNA, whether people like it or not.

The other important moment within all that depravity and the shocking transformation of the seemingly harmless whore “Nina”, is of course, Casca. Casca gets saved this week, from (another) attempted rape, and also a bunch of flesh hungry monsters, by none other than the same creature that came to Gutts and got him to act, at the start of all of this. All I want to say about this is that this creature is very important, and I’m kind of surprised by how much more “in your face” this creature’s appearance is in the anime, than it was in the manga. Or at least, it certainly feels that way to me now, after all these years. 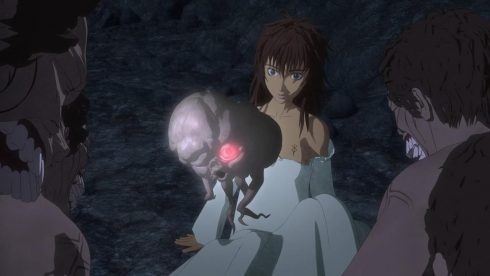 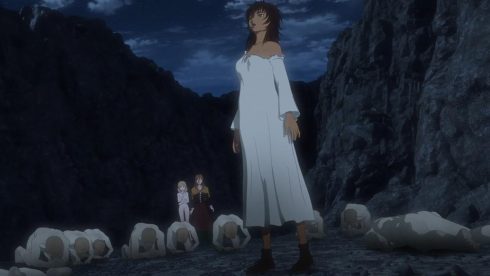 So… Having said all of that, the final thing I’ll talk about is the animation and production values itself. It seems like the anime production staff are trying to find creative ways to basically use whatever hand-drawn animation frames they have, without being overly detailed or very polished. I still don’t get what the big obsession is with just removing nipples from characters naked bodies, but I’m not going to harp on that point any more than I already have (There’s episode 3’s blog post for all of that, if you’re interested XD). What I will say is that while the production values and animation continue to be shoddy at best, I am kind of impressed by how the source material’s story continues to remain captivating, in spite of all the bad presentation.

From that perspective, I suppose nothing really changed with Berserk this week, and I’d say the series has kind of found its rhythm. I doubt we’re going to see any improvement from the series beyond this point, so I guess I’m sort of okay with what we have now. This is a series that I think is only for the really hardcore Berserk fans, and the ones that are willing to make compromises to just see their favorite manga get the animation treatment. Time will tell if those compromises are actually worth it, and if this adaptation was actually a good idea. For now, its at least managing to be engaging despite all its problems.