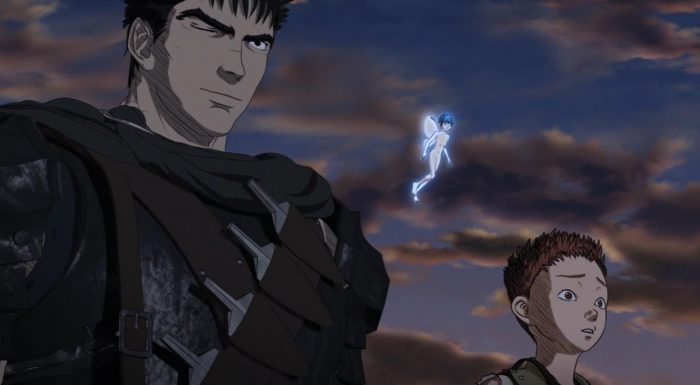 The world of Berserk is a dark and twisted place. Its the kind of place where concepts like faith are hollow, and the term “hell on earth” may not be too far from the truth. And for all the problems that the latest Berserk anime series has, the depiction of the world of the Berserk franchise is thankfully, not one of them. The realization of the horror of the world of Berserk is actually the one thing, I think, that this series is really nailing. Which is good, because.. Anything positive at this point with regards to this series, is a silver lining. 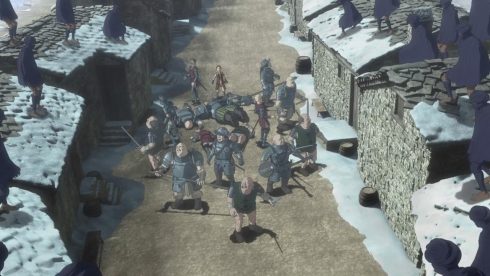 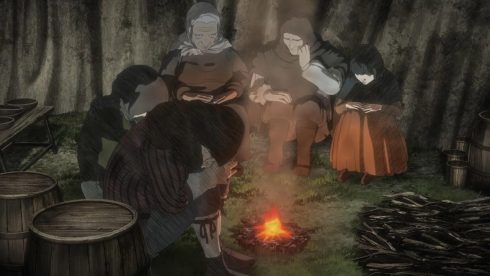 As a sort of rule, I believe that this series often oscillates between two states. The first one, is a state where the poor animation and shoddy production values manage to continuously detract from the immersion of whatever’s happening on screen. This is also the state, that I think the series is in, most of the time. There is, of course,  a second state. A state where the actual shock, horror and power of the source material is just so overpowering, so deeply engaging, that it shines through and just makes you forget about all the less than stellar aspects of this series.

This week’s episode, was largely a case where the second state was definitely more prevalent than the first. There was some truly sick and disturbing imagery that was shown off this week, but it I’d say it was all engaging, in a very unnerving kind of way. It was meant to show how broken the world of Berserk has become in the few years since we last saw it. And man, is this world really in dire straits right now. 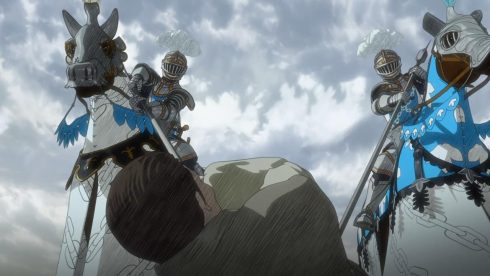 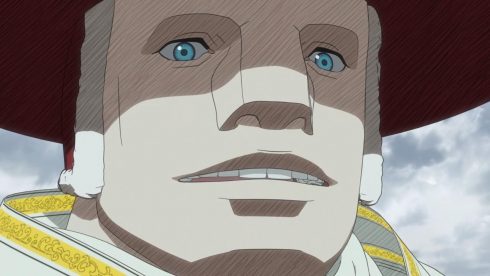 At the epicenter of all the despair and lack of hope, is the religious organization known as the Holy See. This organization preaches a faith that ravages and corrupts everything around it, plunging the world ever deeper into a well of chaos that it already seems to be inside of. Its the High Inquisitor that really personifies everything that’s wrong with the world in Berserk, at least, at this particular moment. When we rejoin the show this week, it takes a bunch of starving villagers, with a mother and a infant and in tow, and tries to have them steal “tributes” to the Holy See. This particular event, particularly the daring courage of the mother, causes the High Inquisitor to decide to finally show an act of kindness (or so it initially seems).

He actually takes in the people that were trying to steal food from the Holy See’s “tributes”, and decides to feed them and particularly save the mother and her child. And while you see the mother being unquestionably happy and thankful, and the child being saved, you can’t help but wait for the other shoe to drop. There’s just that sense of unease, and that whole idea of it being too good to be true. 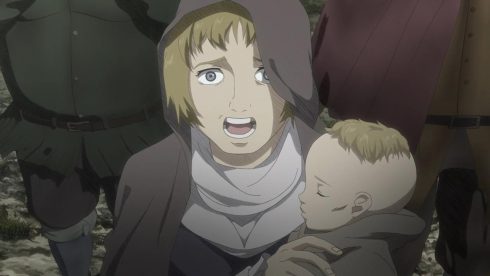 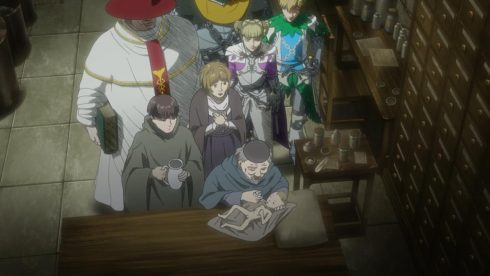 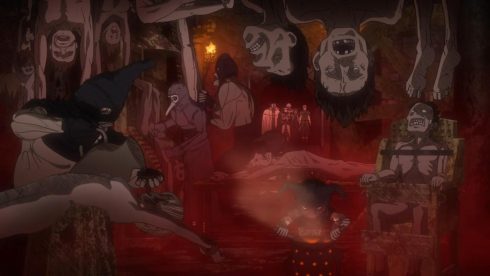 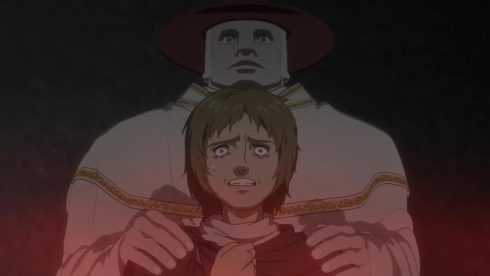 Lo and Behold, as soon as the son is saved, the mother is escorted into what you’d call a hell scape of torture and pain. And the way the High Inquistor switches from benevolent instrument of kindness, to flat out arrogance, hypocrisy and sadism, is jarringly difficult to see. Berserk’s manga will constantly shower its readers with moments of utter darkness, and I think its in how disturbing the source material is, that I found myself completely forgetting the bad animation of the episode, and focusing on the complete and utter darkness that I saw unfold this week.

Beyond just establishing the Holy See and its High Inquistor as a messed up cult of religious zealots and fanatics, the episode also took us back to Casca and the prostitute that had taken her in. The outlook doesn’t get any brighter, and there’s just shades of grim here as well. The Prostitute in question, Luca, seems to be trying to create some goodness and comradery inside what you’d easily call a hard line of work. 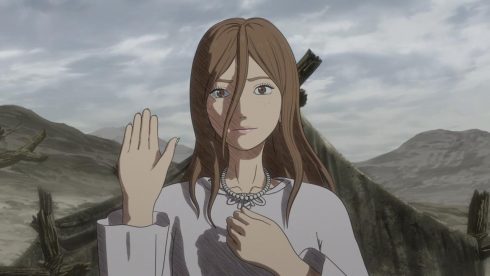 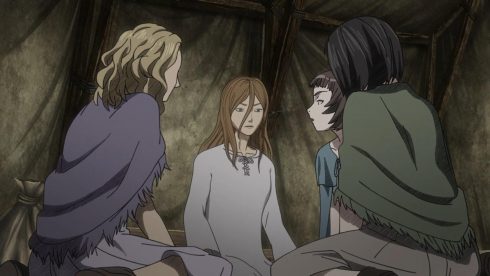 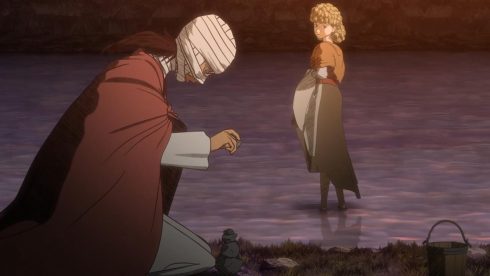 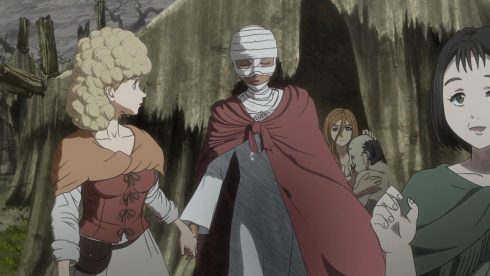 And its thanks to this woman, that Casca isn’t completely and utterly dead (or worse). Of course, given that Casca has a brand on her, she’s a walking source of destruction and misfortune for anyone around her anyway, so I suppose her situation isn’t all that great. And as the episode keeps going, we see that while the women under Luca’s defacto sisterhood have problems, they’re nothing compared to what Casca’s going to unleash on them soon enough.

Elsewhere, there’s also Guts and his second meeting with Isidoro. Isidoro did indeed turn out to be an important character, one that I had completely forgotten about in the premiere (where his inclusion was an anime original change). The only thing that I have to say on that particular matter, is that its been a decent while since I’ve read Berserk. The dynamic between Guts and Isidoro is fairly standard fare, with Isidoro kind of looking up to Guts, in a world where there’s rarely anyone genuinely moral to begin with. 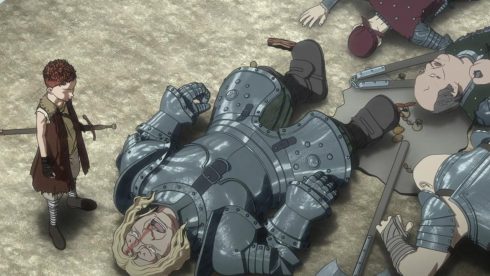 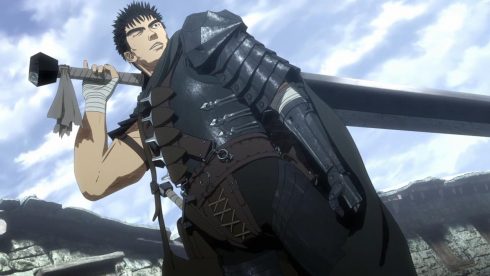 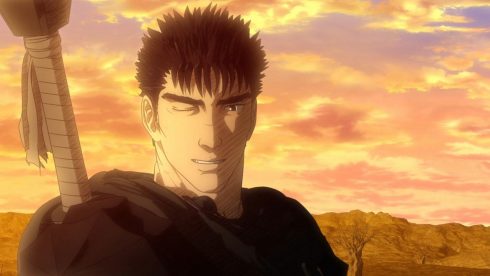 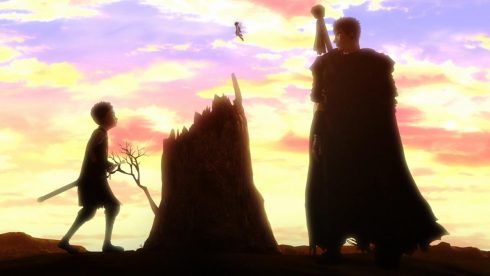 The scenes where we see Isidoro dealing with the mercenaries, show that there really isn’t a lack of ruffians lurking around, looking to take advantage of the weak. It also clues us in to the other party that’s part of the political struggle in Highland at the moment, the Kashans. There’s a nice little call back to the movies and Flashback arc here, with the leader of the Kashan scouts be the same guy that hunted the Band of the Hawk after Griffith was sentenced to torture by the king.

So… To bring things back… By the end of the episode,  we have Guts zeroing in on Casca’s location, dealing with a bunch of evil monsters that have resulted from the wheel executions that we saw from last week. Meanwhile, Casca herself is out in the open, near a bunch of religious cultists that are beyond sadistic, and is about to be attacked by the demons and monsters that she was branded as a sacrifice for. 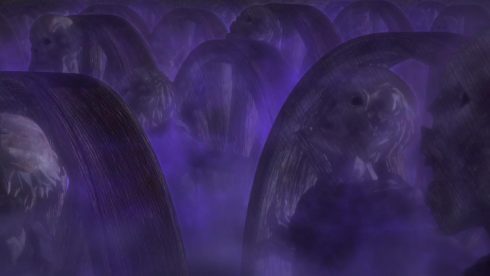 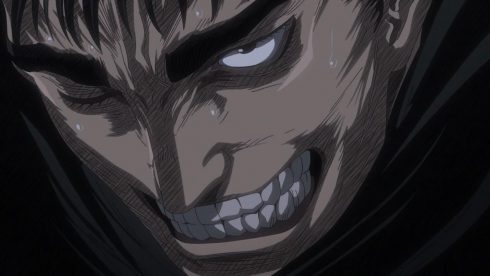 Things are definitely heating up, but what I’m appreciating about Berserk, is the measured and slower pace that its taking now. The first three episodes felt very uneven and rushed, and while the animation for the series continues to be lackluster and absolutely amateurish at best, the storytelling is at least being done well now. I can always respect a series for taking time to slowly build on its characters, their dynamics and on expanding upon the world that its trying to show its audience.

Hopefully the character moments and dynamics shine through, just as much as the world building of Berserk’s latest anime series, which is very much its one highlight thus far. Here’s to next week, and a continued sense of improvement.