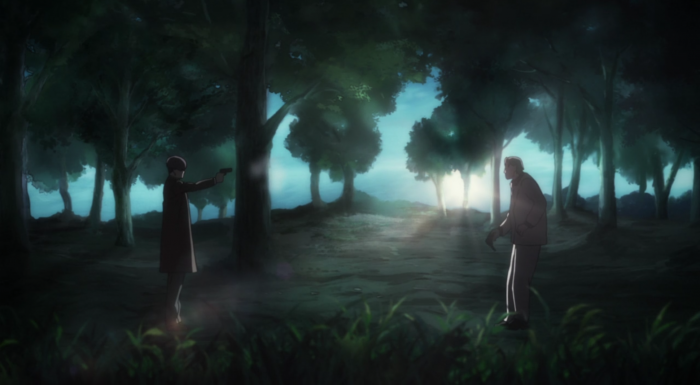 91 Days had possibly the best premiere of the season, and two episodes later it continues to dig its hooks into me with twists, turns, mysteries, and conspiracies. You read or watch enough stories and you start to get a feel for where a narrative’s heading, but 91 Days has kept me on my toes with unexpectedly speedy escalation, a chessboard full of barely-glimpsed players, and a camera that just loves to build tension through canted angles and wide shots of empty rooms. I’m not sure where it’s all heading, and I love that about it.

You know who else isn’t sure where this is heading? Angelo, a.k.a. Avilio, whose quest for revenge has got him in way over his head. He returns to town with a letter that reads like a trap (“here are the names of the people who killed your family, ‘kay byeeee!”) and almost no knowledge of the factions vying for power. While I’ll give the kid credit for decisiveness (did not expect Vanno to die so soon), his ignorance nearly costs him his life because he doesn’t understand just how many people are watching and manipulating this city. Even the camera often feels like a player, peering in from above or around corners, waiting to make its move. 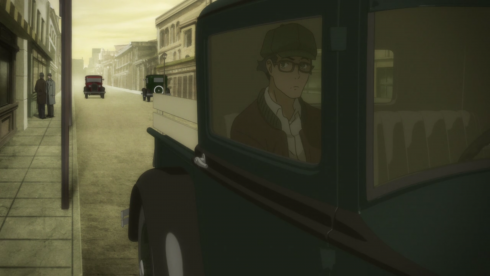 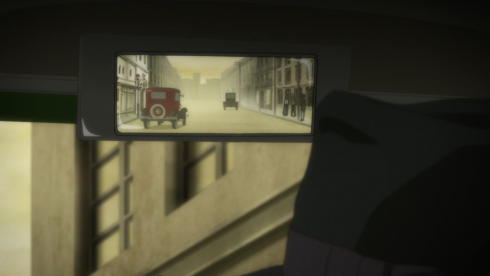 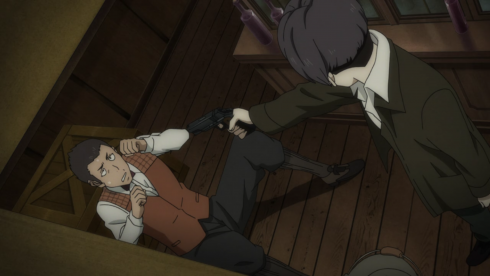 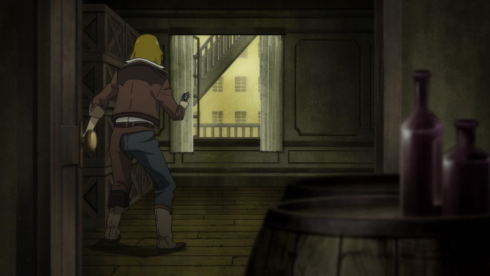 And who is manipulating this city? Well:

To say nothing of the local barkeeps, cabbies, and bootleggers just trying to make a buck. And speaking of bootleggers, Corteo does know the city and is understandably frightened for his friend. He’s the main reason Angelo is still alive, since his connections eventually lead them to Serpente’s body and convince Nero that “Avilio” is on his side. Angelo lives to slay another day, but his and Nero’s rash actions force them to leave town to avoid a war with the Orco family. Whoooo’s ready for a road trip buddy comedy?! 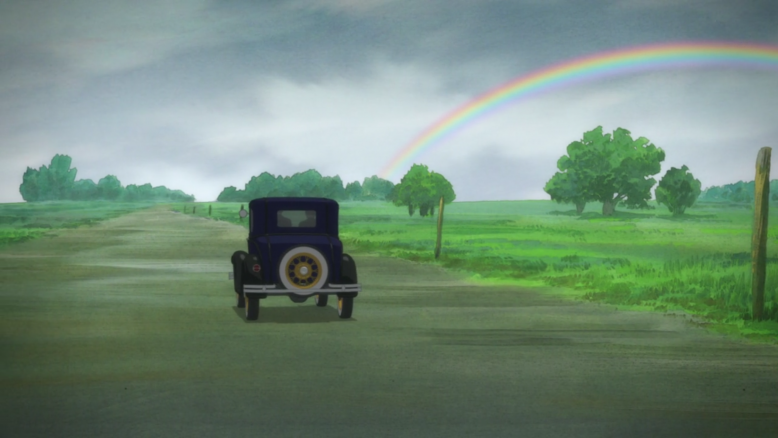 These two unlikely companions are about to discover that the road to hell is paved…with friendship.

What stands out to me most about 91 Days at this point is how polished and well-composed it is. While the animation can be a little sloppy at times, the direction and writing are tight and focused. Events move quickly but never feel rushed, and every scene and shot serves a clear and distinct purpose, whether that’s to forward the plot, unveil aspects of the world, or reveal character.

The cast’s interactions are relatively free of exposition or long speeches detailing their thoughts, yet we’re able to see through their expressions and reactions what motivates and moves them, whether that’s Angelo’s barely restrained volatility (the opening sequence’s shaky, traumatic flashbacks while he clings to his gun is downright harrowing), Corteo’s care and concern for his friend, or the fierce pride and protectiveness behind Nero’s easygoing demeanor. Nero crumpling beneath the tree, mourning Vanno’s death, is vital to his character, and lays the groundwork for what’s likely the real conflict here: Angelo’s own grudging respect for one of the men who murdered his family. 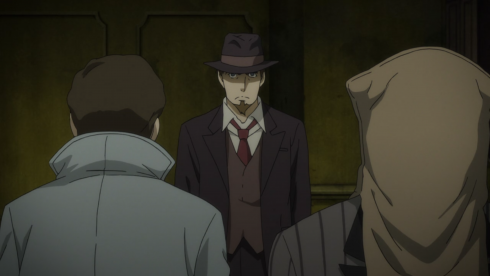 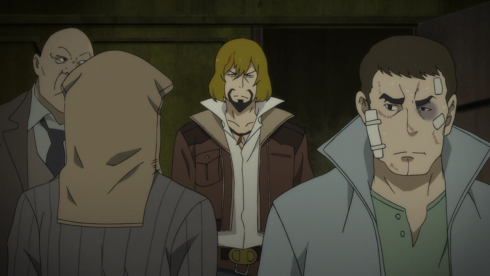 Fango, meanwhile, continues to stick out like an overzealous cymbal crash in the show’s fine-tuned orchestra. He’s fulfilling a role integral to this genre: the man who thrives on war and pain, who can only exist in a world where violence is sanctioned and encouraged by those in power. Baccano‘s Ladd Russo and Boardwalk Empire‘s Gyp Rosetti (to name some recent examples) fill the same role and are some of the most magnetic characters in their respective series, powder kegs of animal aggression who expose the hypocrisy of the well-dressed, businesslike “gentlemen” bosses, stripping away the veneer of order to show the chaos beneath. He’s supposed to be an aberration, and in that respect he succeeds.

The problem with Fango is that he’s sort of…well, boring, playing at a single volume instead of the manic rise-and-fall of other, more interesting incarnations of this archetype. Part of this is Tsuda Kenjiro’s perpetual snarl, but most of it is the writing. There are no real surprises with Fango, no moments where he holds back, no shreds of humanity, no motive beyond “make pain happen.” He’s not so much a character as he is a carnivorous force of nature. Ladd and Gyp can be reasonable, even friendly, and it’s that erraticism–that constant question of who or what will trigger the next explosion of violence–that loads their scenes with so much tension. But Fango’s phasers are always set to “kill,” and it makes him predictable.

I’d like to see the series either flesh him out or shift the focus to other, more layered antagonists, but even if it it doesn’t, I don’t see it as a dealbreaker so much as a minor stumble in an otherwise sharp performance. As long as 91 Days keeps its focus on the main event–Angelo’s relationship with Nero coupled with his quest for revenge–I think we’ll be just fine. Employee of the Month, right here.

Among all the mafia intrigue and cat-and-mouse games, a few connecting threads have also started to emerge: The paradox of the “moral killer” (best exemplified in Vanno’s “forgive me Father for I am totally about to sin” prayer) and the use of vengeance to justify an endless chain of violence (Trunco, Serpente, Vanno…) are present, for sure, and hopefully we’ll get to dig into them as the series goes. But what really caught my eye in these two episodes was the building conflict between the older and younger generations.

The Dons of the families, having used violence to shore up power, now want order so they can be free to enjoy their wealth (their fancy cigars, their personal chefs) in peace. They’re insulated in their ridiculous dining rooms, protected from the bloody realities of how their wealth gets made, so everything is “just business” to them. Distant. Professional. 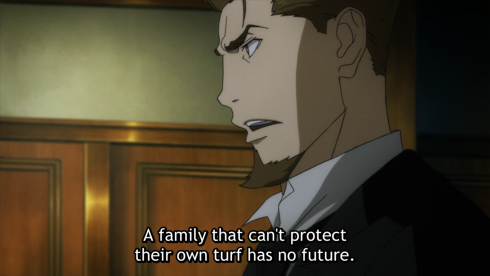 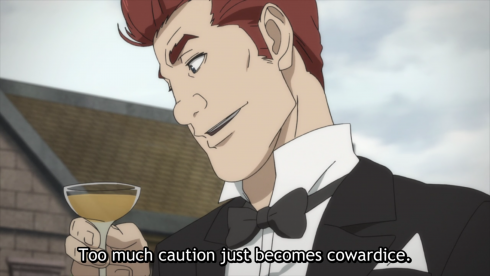 But the younger generation, raised in this environment of “organized” crime and closer to the effects of it, can’t see it like that. It’s not “just business” to them. Angelo’s grief pushes him to seek revenge for his murdered family. Nero’s pride pushes him to defend his turf and protect his people. Corteo’s moral code pushes him to first reject the mob and then turn around and work with them in an attempt to help his friend. Even Fango is very much a member of this world, embracing and craving the violence that allows the Dons to live in luxury, talking of a peace that no one on the ground can imagine or likely will ever see.