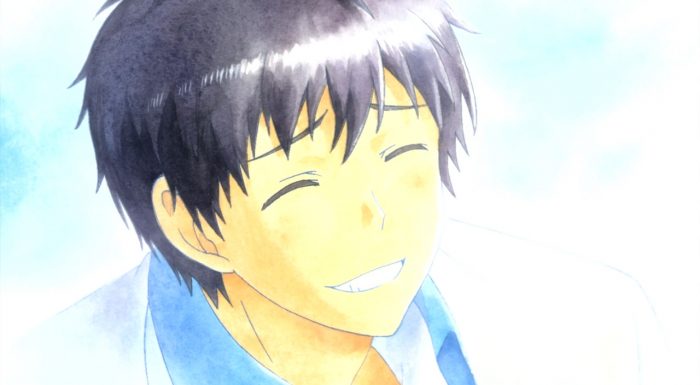 We’ve finally made it to the end of the line. Kind of sad to say goodbye to the ReLIFE anime after all these episodes, but all good things must come to an end. That in a sense is the feeling that Arata is left with in this episode as well. The realization that these moments are so precious and that they will eventually end. The pressure and the strain on him became more apparent in this episode as he had to personally draw the line between himself and Hishiro, not wanting to take up so much of her world that he would leave a gaping hole in it when the memories of him disappeared. Of course the great irony in this episode is finding out that he’s not the only one facing that dilemma. Hishiro herself is facing the exact same situation as the original ReLIFE subject for this branch! 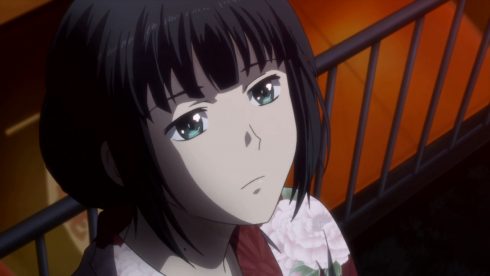 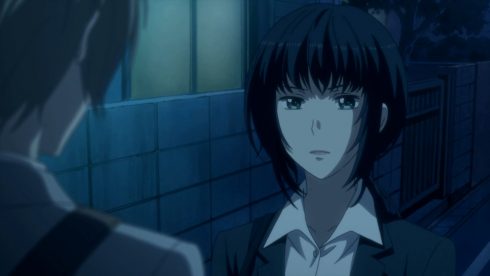 Really the first thing that has to be talked about is the pretty big reveal that Hishiro was the first subject of this experiment. The mysterious subject 1 that was such a tough case and didn’t work out. I didn’t want to really play into any speculation there since I did actually know that this was the case. It might be the anime moved too quickly (especially with how all the episodes came out at once) for people to spend time speculating on this, but it was something I found a pretty constant question while reading the manga. Who was the big first subject? Are they still around and could it be Hishiro? In the end the answer was affirmative and it makes sense. Hishiro’s social issues would undoubtedly cause her some problems in the working world and she would seem like a decent ReLife subject. Her intelligence is extremely high, just needed to develop social skills. But….clearly that failed spectacularly. Hishiro is someone who struggles to change and without someone like Arata around she just didn’t get very far in her efforts. 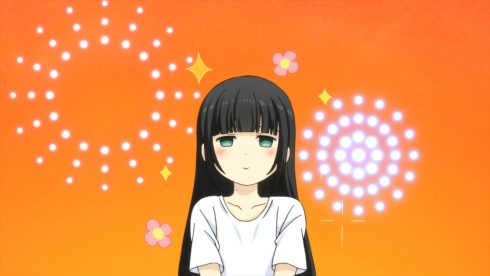 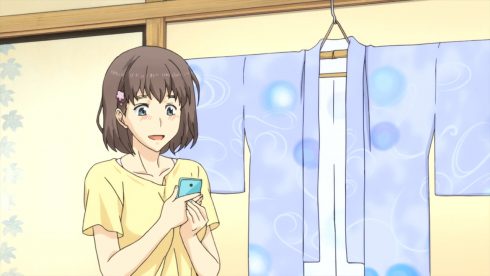 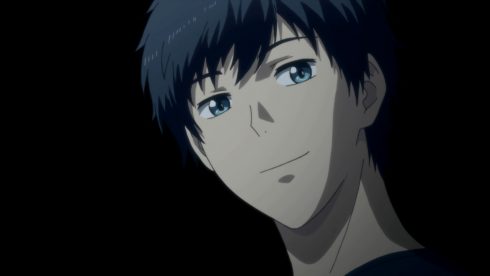 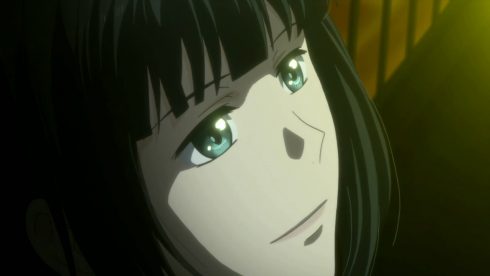 If we get a season 2 then we’ll certainly see more of why things didn’t work out for her and that’d be interesting to get a glimpse of. Regardless we now see that she is in very much a similar position to Arata in carrying the burden that she’ll be forgotten in time. Although with nothing happening last year that’s better than the alternative. She never would have made connections at all if she didn’t do anything. It’s a tough situation for anyone and I do feel for Hishiro in that sense. She obviously doesn’t have friends outside of this experiment and in a sense not being able to keep connected with them will be tough.

All the more so is her position of dealing with the obviously growing feelings she has for Arata. We’ve seen it from his point of view, but it is the same for her. Falling in love with a much younger guy that will only forget her after this year is over. All the more difficult since obviously she hasn’t had any romantic relationships either. One final difficulty there is even if she is interested in Arata, he’s going to make it difficult for her to really pursue that since he’s going to try and distance himself a little in order to protect her memories. 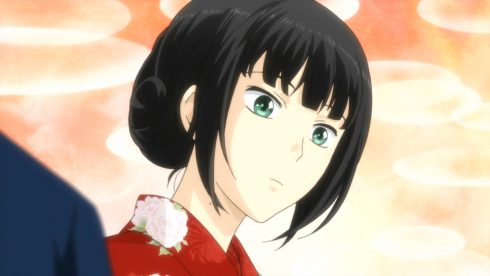 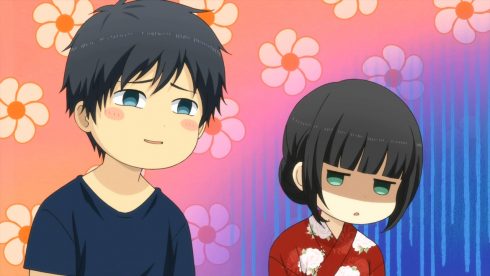 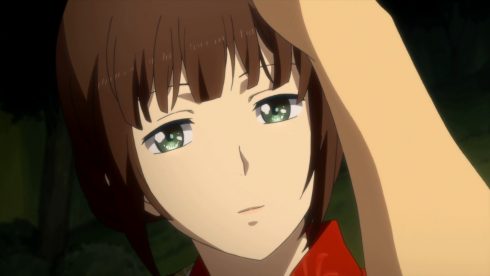 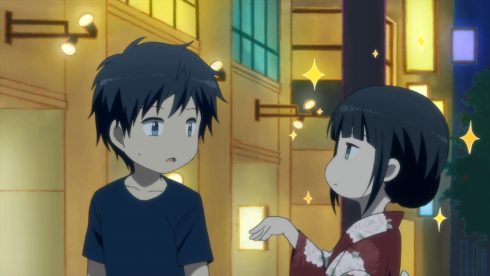 Still, I think finding out about Hishiro is one of the better things for the ReLIFE series. Before there was nothing but a tragic kind of feel for any romantic involvement between Arata and Hishiro. Now it’s just more questions than anything else. Just what will happen when the experiment ends? How do memories interact with 2 subjects? How do the memories work for the support staff? Will they remember each other? Will they both forget? I have no idea how that will work and it does create some uncertainty, but it does also give you some hope. Even when the experiment ends they might still have a chance together as their regular adult selves and having someone who remembers their friends with them would be a real comfort. But you just never know and just because we know the truth doesn’t mean they know and that kind of makes a big difference. 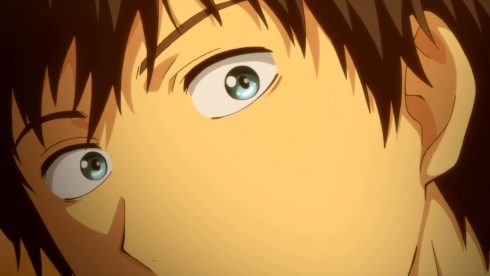 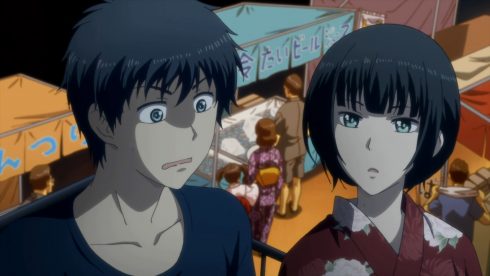 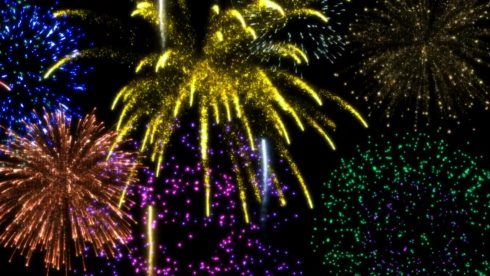 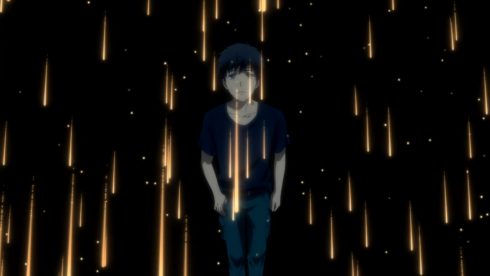 Just what will Arata do going forward? I can understand his stance. Even though he’s trying not to acknowledge it, he has obviously fallen for this awkward girl who he thinks is much younger than him. Just what is he supposed to do? Because he cares about her he wants to be close to her, but he doesn’t want to be because it will hurt her and himself. The idea that he’ll be forgotten by Hishiro hurts and the idea that he could leave a big gap in her memory is scary. He’s already been in so many of her big moments that he doesn’t want to basically leave a blank slate behind for her and take away all her efforts to improve herself and change.

Though in the end I think it is more that he can’t accept that he is in love with her and that she’ll be lost to him at the end of the year. He wants to pull back, but it is hard when he also wants to be close to her. The moment in the park showed that he is realizing it even if he tries to rationalize it away. It’s a strange situation and one to watch out for if/when this gets another season down the road. 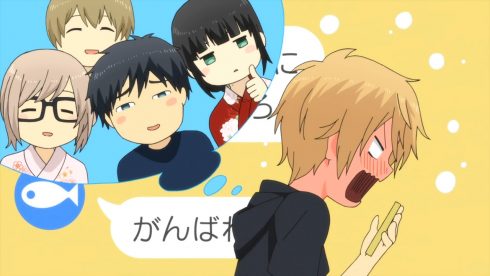 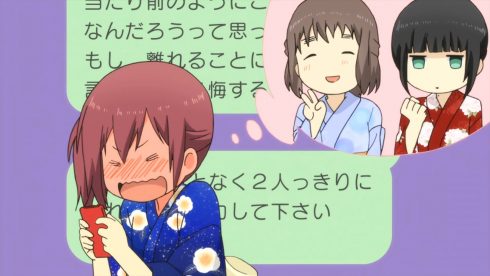 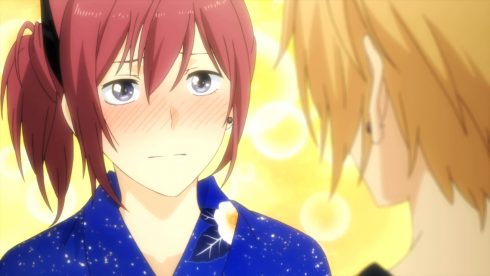 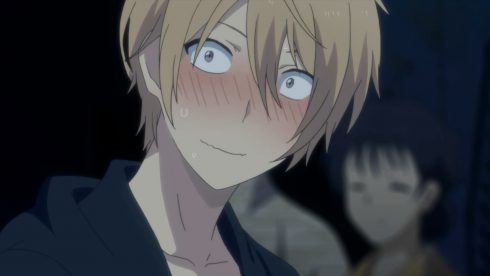 The other big thing was of course Oga and Kariu, although the outcome was never in doubt. It is a cute thing that Kariu as well saw this as the perfect chance to make a move. Kind of sad that she was actually going to hold off on doing anything if Oga was actually going to the same university as her. I mean really how long did she plan on keeping this situation going? Until they were about to graduate from there? Though I suppose it is pretty human to just procrastinate on something until you absolutely feel the pressure to do something about it. She was timid enough to basically sit on her feelings for 2 full years of high school and most of the third year before this summer chance came up.

In the end you could argue that Kariu is as major a character as anyone in the show considering how many story arcs revolve around her. The initial issue with Hishiro, the injury problem with Honoka, and then this confession from Oga. This girl has been central to many events. At least this one wasn’t a bad situation. It was more about just getting two people together and having it work out nicely. That kind of awkward and silly confession just works well for them. Oga just blurting it out while they are standing around and Kariu coming back with a pretty good confession. It was just a nice series of scenes where things worked out pretty nicely. No complaints at all in that sense. 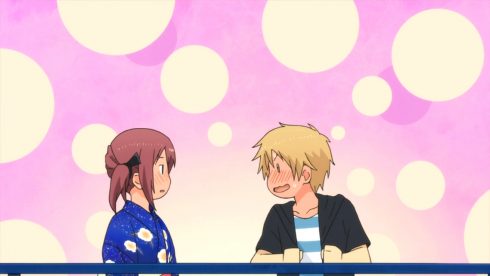 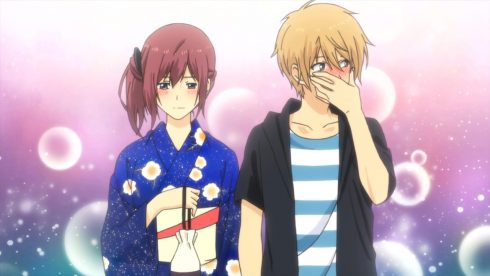 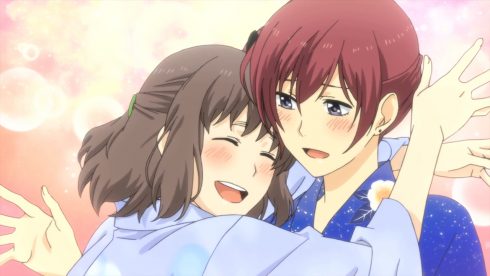 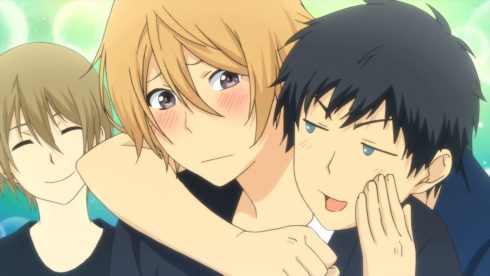 This was a pretty nice episode to leave on. Obviously it is too bad to end the series before the story is over, but the source material isn’t over so you can’t exactly do much about that. I wish I knew how things will turn out for these characters. It was concluded nicely for Oga and Kariu, but they are hardly the only characters who have plot threads hanging. Mostly it’s the main duo of Hishiro and Arata who still have their futures hanging in the air. The hope from An that Arata might be able to do something for Hishiro and help her reach a happy conclusion. That itself would really save Yoake who I’m sure regretted not being able to help Hishiro at all.

It is too bad we have to say goodbye to the show, but we can always hope for more in the future. They covered an incredible amount of ground in this anime so I can’t say there is nearly enough material to do another season right now. But, maybe when that story ends we can come back and see how Arata’s ReLife turned out in the end. 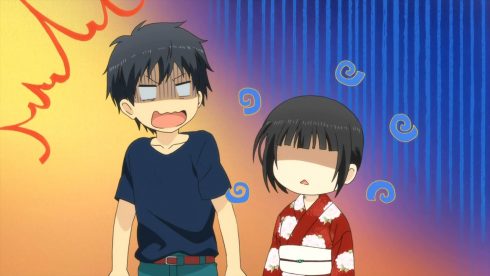 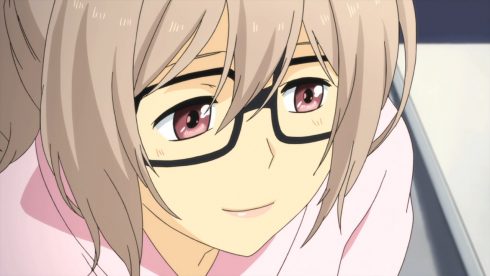 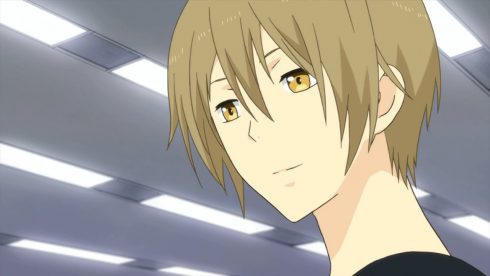 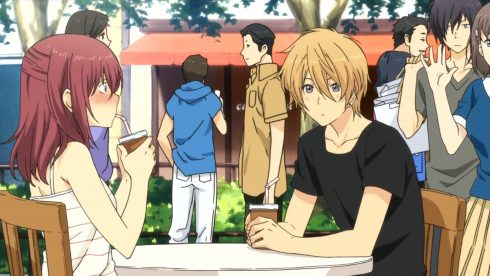 When this first released all at once I was kind of overwhelmed and blown away. I hadn’t been sure if I was going to go ahead and blog it at all and then it was all there. Thus leading to this situation where I ended up doing a kind of blogging marathon. It has been a wild ride covering this thing and realizing just why I really enjoyed the source material in the first place.

ReLIFE has a lot of difficult and dramatic moments, but they really work. This show has a strength to it of hitting points that can make people think of their school lives and also their working ones. Arata’s situation is an extreme one, but I’m sure people can relate to having to deal with bad work environments and terrible bosses in one form or another. Or people can probably relate to some of Kariu’s issues of not being able to match up to rivals or feeling like you aren’t getting anywhere. The show handles some solid issue and allows the characters to face them. Even going to the serious extremes of the suicide of Arata’s senpai. That is the kind of thing that sometimes happens and the hurt to those left behind is shown clearly here. 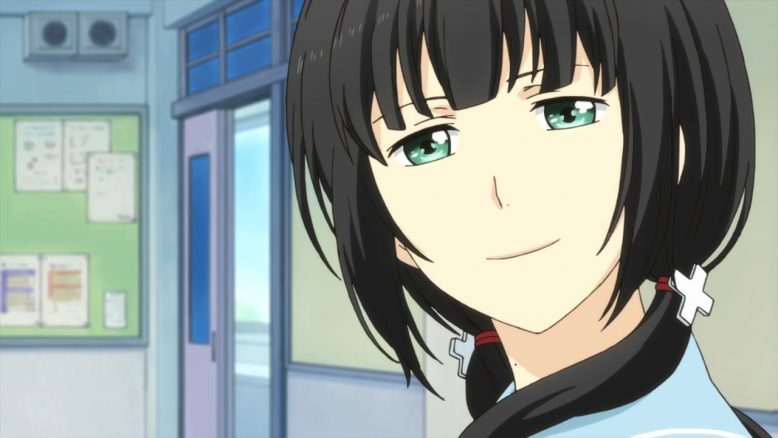 In the end I do really like these characters. My personal feeling is that I hope for the best for Arata and Hishiro. I wish there was a more ideal result where the friends find out the truth and they can all stay in contact in the future, but that may not be realistic. If nothing else I hope that Arata and Hishiro even without knowing the truth will take their chances and seek out their own happiness. I will still throw a review up later, but this is the end of the ReLIFE episode posts. This show lived up to my expectations. It might have sped up at times or changes events slightly to make them flow quicker, but I don’t really mind. The end result is a good show and one I hope gets enough attention despite the fact that it really is over in a flash.