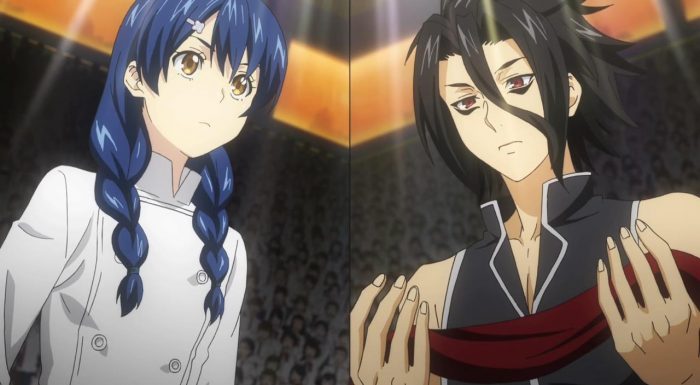 Man, do I really want some Ramen after that episode. Shokugeki no Soma’s second season isn’t slowing down, and any imperfections that were even remotely present in the premiere, just washed away as the show really brought its A-Game once again this week. I wish more and more people would watch this show, because it really is so darn good. Its exciting, clever, fun, funny and charming with a bunch of elements that will appeal to almost any demographic. The fact that Shokugeki no Soma isn’t one of the biggest runaway successes in Japan and the west, will forever leave me baffled, and this week’s episode just added more fuel to that particular fire. 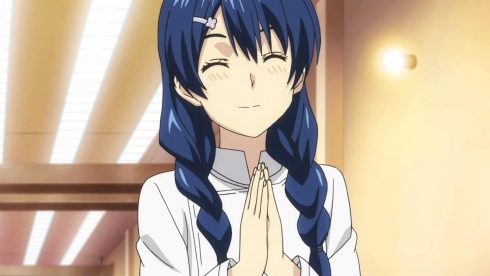 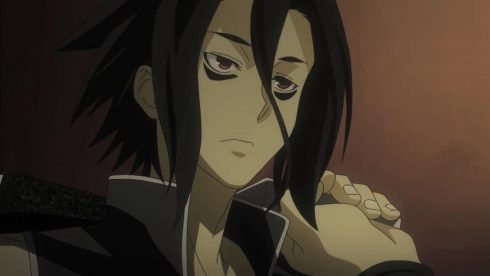 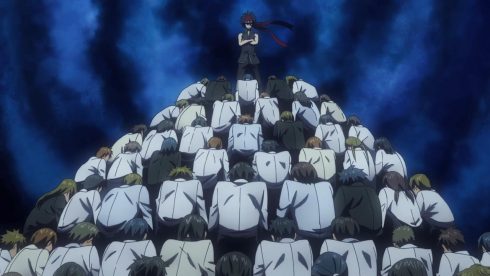 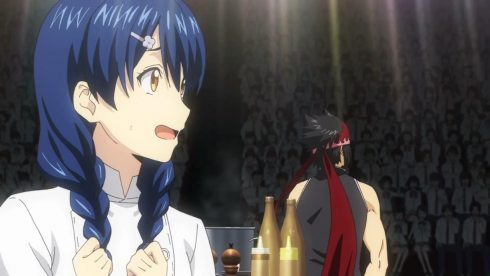 This week had the focus squarely on Megumi as she took on the rather rough and viscous Ryo. Megumi’s always been my favorite female character of the show, and her entire character arc of improvement and progression has been wondrous to see unfold. Going from where the series started, when Megumi was a nervous, failing wreck to the point where she’s at now, has been one of the most rewarding character-driven experiences that I’ve had from anime. And one of the reasons that I continue to prefer Megumi over all the potential “love-interests” for Soma, is that she just compliments and learns from him so well.

Indeed, much like in previous arcs, you could definitely see Soma’s positive influence on Megumi, and how much she’s taken her experiences with him to improve. The biggest thing, is of course, just how able Megumi’s become, to perform under pressure. Taking that Megumi, who’s learned and matured based on her interaction with others, and pitting her against someone like Ryo, who’s a lone wolf, was once again, ingenious. Ryo is the perfect foil and adversary to the friendly and collaborative Megumi, with his rough, brash and slightly bi-polar personality, and the fact that he’s basically someone who’s in it to win, no friendliness necessary. 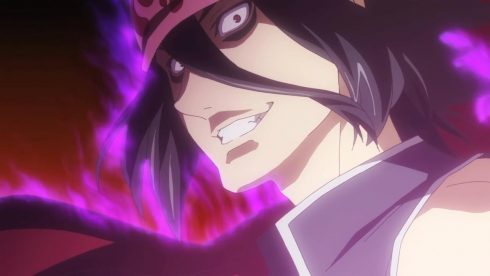 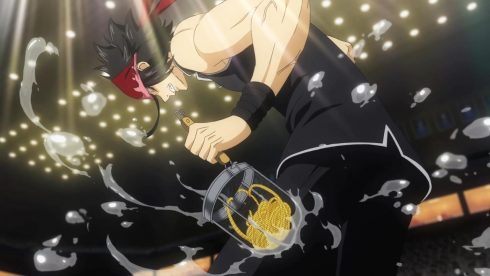 Ryo’s a pretty unique character, because he’s the delinquent loner, that just dominates via his cooking in a very traditionally “manly man” manner. Ryo’s cooking is all about a show of power, its all about overwhelming the person who eats his cooking. And much like Soma, Ryo’s been cooking and serving customers since he was very young. He’s almost like a dark reflection of the series protagonist, Soma himself. He’s a boy that’s been raised solely on competition, without the love and care of a inspiring father  figure.

The dynamic of Ryou versus Megumi, and the clash of ideals that once again was present, really made this match something different. I’m enjoying how each character in the Autumn election finals is actually embodying a specific idea or way of cooking. Megumi’s whole “learning to achieve new heights in cooking with friends” and Ryo’s “Alone at the top” mantras, provided two unique perspectives on not just cooking, but on the whole idea of “honing your craft”, as well. 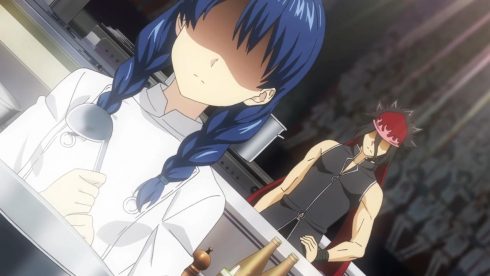 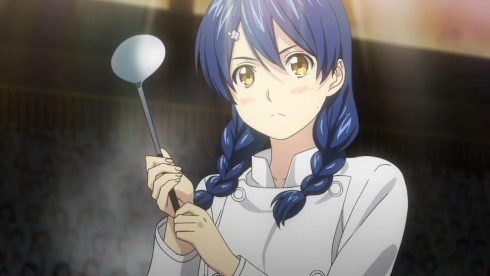 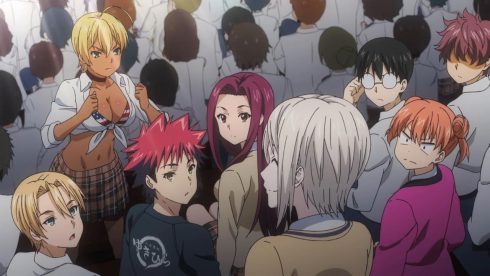 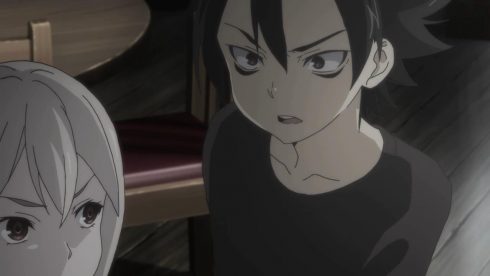 And while the two of them worked diligently on their respective dishes this week, it was the peanut gallery, that also provided some interesting moments and tidbits. I was glad to see Nakiri Alice kind of join the fray this week, and start chatting and talking with Soma and the rest, as they all watched the big match unfold. Alice is a girl that I feel, has been in dire need of friends, and Ryo kind of being her first real one, hasn’t helped matters. He’s definitely not what you’d call a people’s person, so to see her encounter Soma and already become kind of likable is great to see.

Slowly but surely, Shokugeki no Soma is turning all its characters into a fun group of kids, that play well off each other and learn and expand themselves, like a bunch of passionate students would. Learning from each other, developing like minded friends and reaching for new heights? Is this really the same Totsuki Academy that we saw last season? It definitely doesn’t feel that way, and I like how the show is slowly transitioning towards a school that’s actually a fun and collaborative learning environment. That’s how schools should be. 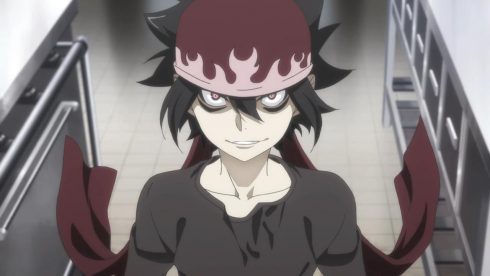 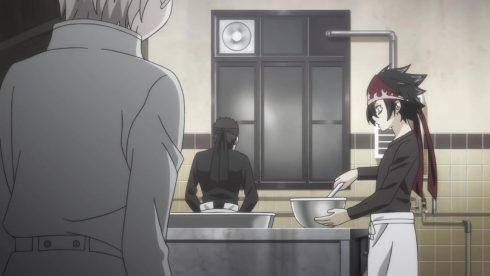 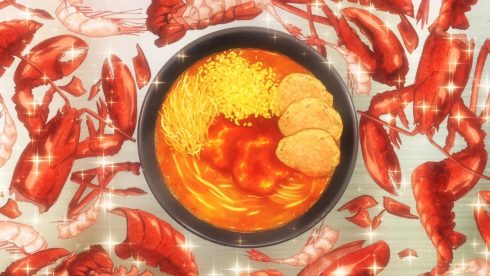 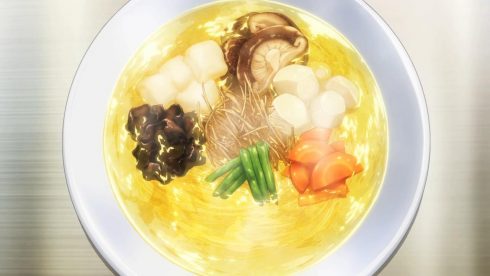 But all of the side stuff aside, the main event, the Shokugeki itself, centered around Ramen. You’ve got to kind of hand it to the series – Its not saving any of Japan’s big cuisines or dishes for later, and I’d argue that Ramen is perhaps, at least in the modern day, one of the most famous Japanese cuisines known around the world. The topic this week, is undoubtedly more powerful and focused, than say the more general Bento box topic from last week.

There’s some serious stakes involved with covering something like Ramen, which, if you’ve ever had any at a true Japanese restaurant, can vary greatly depending on what you’re having. What I did find kind of odd, in a good way, was that the Ramen this week was actually seafood based. That’s generally the kind of ramen that I swing towards, so it was nice to be able to see something that was in the same vein as the stuff I’ve had before. 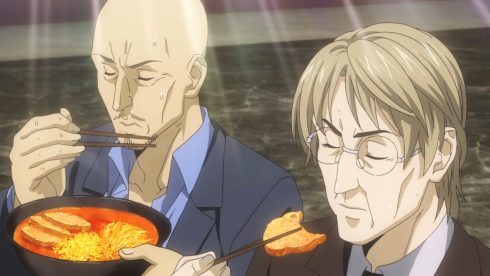 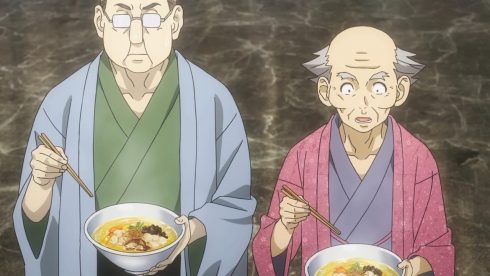 Not to say that I’ve ever had stuff as outlandish and impressive looking as what we saw this week. And as usual, Shokugeki no Soma had the very essence of Ramen, down this week. Three major components, The broth/soup, the Toppings and the noodles. It was interesting to see that the noodles themselves were kind of disregarded this week. Noodles are a pretty large topic to cover in themselves, so I’m not surprised that the show decided to focus on just the toppings and soup instead.

Slanting the topic more towards the soup and ingredients, also played to both characters’ strengths in a way. Megumi and Ryo have both shown that they really understand flavor, and how to use whatever ingredients they’re most familiar with. For Megumi its been her childhood home’s local ingredients, and for Ryo, he’s seemingly a master at using seafood as a whole. And as Alice pointed out quite aptly, the Shokugeki this week was a worthy battle between two cooks that had grown up in port towns. 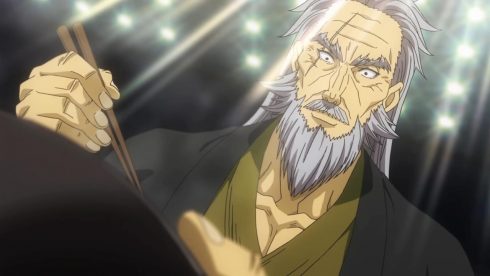 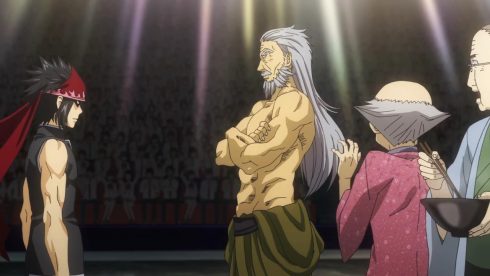 As to which dish I actually preferred this week? I’d have to give it to Ryo. Ryo’s deep, rich and overwhelming marriage of flavors seemed to be the kind of thing I’d enjoy more on an occasional basis. The thing with rich ramen like that, is that if you have too much of it, too often, it’ll lose its luster after a few times. For a first time dish, used in a contest, however, Ryo definitely had the advantage this week.

Not that Megumi lagged behind at all, providing a light broth based Ramen that was pure, clear and especially embodied everything that we’ve seen from her. One of the most fascinating aspects of Japanese cooking (for me), is the leveraging of natural flavors from the ingredients, rather than relying heavily on sauces or spices. Its an interesting concept, and one that I think both cooks embodied this week. They used every ingredient they had to really create a unique collection of flavors, all swimming inside a soup with noddles to compliment the taste. 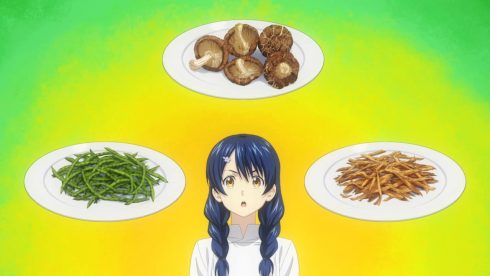 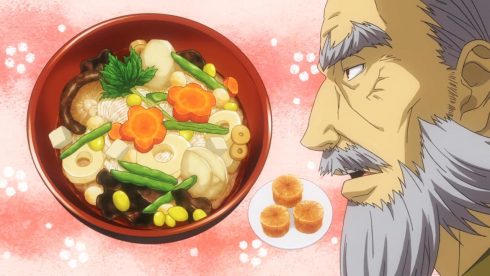 And while I found Ryo’s Ramen to be more tantalizing at the outset, I feel like I’d be having Megumi’s Ramen on a more regular basis. Megumi’s light, sweet and vegetable based Ramen just seems like the sort of thing that you’d have as a “regular” at a restaurant. And there’s something to be said about how Megumi’s Ramen has more Japanese DNA, than Ryo’s french soup inspired Ramen.

Which one will win? I feel like Ryo’s will, even if I’m hoping against it. Ryo is at a point where he needs to be humbled a bit, and learn and expand his horizons. Losing to Megumi would definitely do that. It would also open him up to the idea of actually learning from others, rather than just competing against them. I’m not sure if we’ll ever actually see Ryo shed his loner, competitive based personality traits, but it’d be interesting to see. The one problem with that, of course, is that it wouldn’t be super believable. 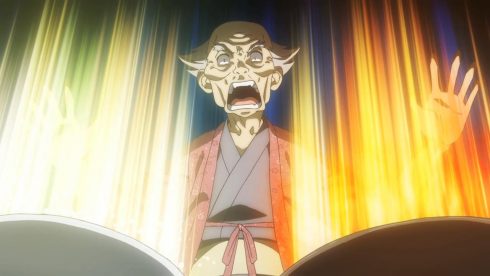 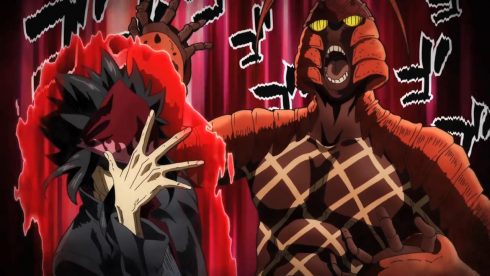 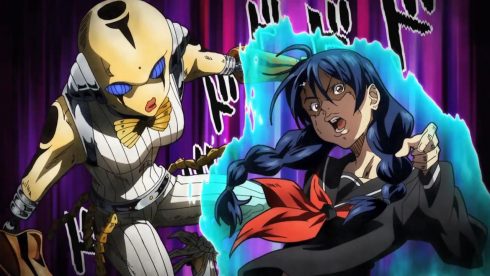 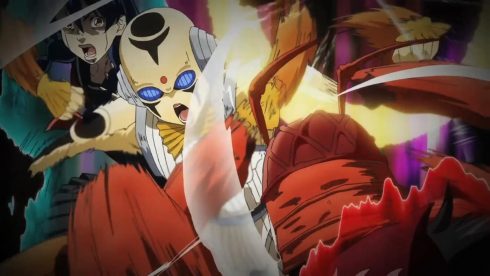 Megumi losing to Ryo, with a very small margin, would I think give her character enough development for now. I can’t see Megumi advancing to the late stages of this Selection, so she’s got to bow out at some point. This seems like a good a place as any, and I think, for the Megumi fans like myself, we got enough great moments from her this arc, to be okay with that outcome. All of that being said, however, I don’t know for sure, and THAT is the beauty of this show. The fact that I’m not entirely sure of what the outcome will be, is pretty darn awesome. And like I’ve said numerous times before, the best entertainment, is the one that you can’t predict.

The judges themselves definitely didn’t elude to any one candidate this week. Speaking of them, their reactions this week, were again, very  fun and hilarious. Added to that, I particularly enjoyed the little reference to Jo Jo’s Bizarre Adventure, with both Megumi and Ryo giving their own take on “Urarararara!!” (Which is what Kujo Jotaro shouts during his Stand attacks). The whole changing their particular Ramen into Stands, and then attacking each other while shouting their primary broth ingredient, was a nice little joke and got a few good laughs out of me. 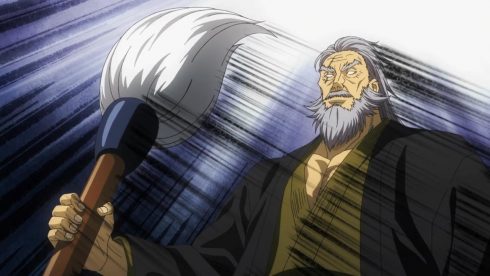 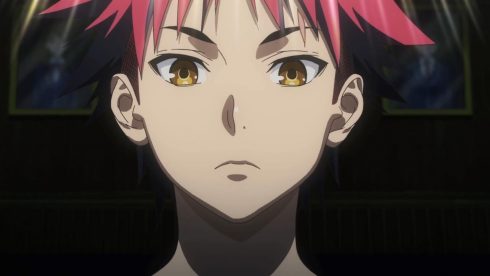 Now… The one other thing I’d like to mention about this week’s episode, is the immaculate pacing. Last week, one of the things that worried me, was the slightly rushed nature to the pacing. Everything just seemed a little too fast, if only just slightly, and I’m glad to see that particularly kink completely ironed out in the second episode. Everything flowed well this week, there were nice breaks and pauses, twists and turns, and heart felt character driven moments. This was Shokugeki no Soma firing on all cylinders. And this was an episode that didn’t feature the main protagonist, so that’s a bit of an achievement in itself.

All in all, I’d say this was another solid offering from a show and franchise that keeps on giving. Each week definitely feels like an experience akin to trying out fantastic new food. And that’s just the sort of feeling, and embodiment that this show should have.