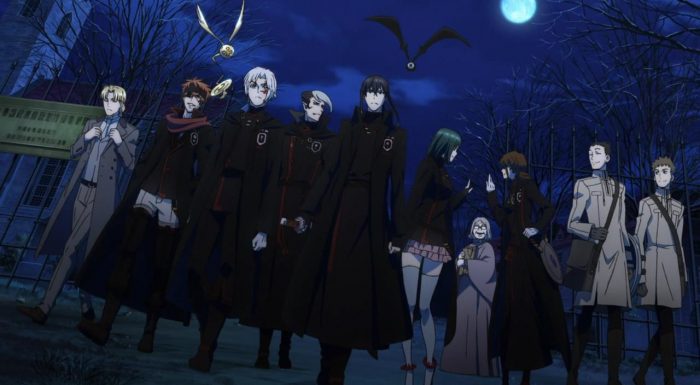 That was some serious whiplash there, and in more ways than one. D.Gray-man is yet another beloved franchise that’s making its long awaited return this season with D.Gray-man Hallow. Now… This second series for the franchise is notable for a few key reasons beyond just being the franchise’s big return to animated form. One, its not a reboot or remake, but a continuation of the first series, one that ended in 2008 (a good 8 years ago). Two, its voice cast has been recast heavily, with main character Allen Walker getting a new voice a in the form of Murase Ayamu. And Allen isn’t the only one, with big characters like Kanda, Lenalee and Lavi have gotten new voices as well. Third, there’s the fact that this second series is only going to be 1-cour (13 episodes). 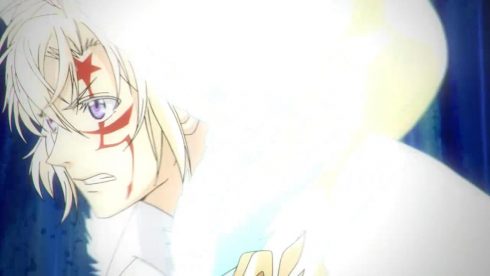 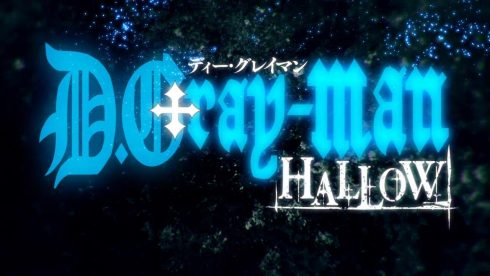 I will confess, the whole situation with D.Gray-man Hallow is strange to me. I’m glad to see this franchise make a return, if only because I LOVED the original anime series, and followed it weekly when it first aired. In those days, D.Gray-man was a very unique shounen series that was darker, featured a much different protagonist to the norm, and have a visual style and art direction that was gothic, enchanting and pretty unique. After the first series ended, the manga for the franchise trucked on for a bit, before changing from a weekly schedule to a monthly one, and then even going on a pretty long hiatus. It was after the hiatus that the franchise kind of left me, as it felt like it became a different series entirely with a different art style, and a harder to follow story.

Having read a bit ahead after the first series, I found myself pretty lost in this first episode. There were some notable parts of the manga that were pretty aptly skipped over, and that in my mind, made the transition to the new series pretty jarring. And that’s nothing to say of the new voices for the characters, which feel very alien. Which is ever the more bizzare, because its been eight years since I heard these characters, and yet some of the voices really didn’t feel like they fit. 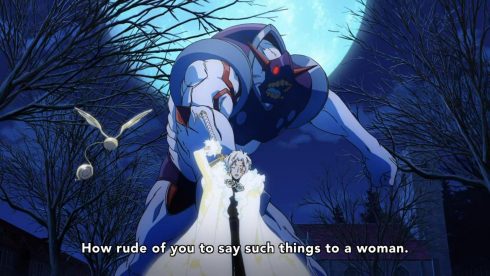 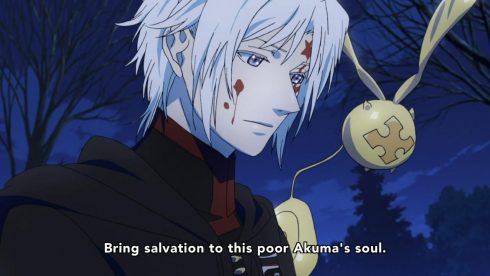 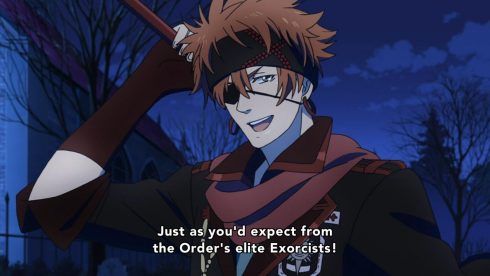 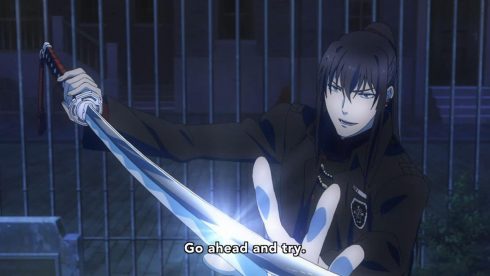 When a new seiyuu takes over a role, there’s a certain part of the character that is infused by him or her. In this case, it really felt like Allen Walker was a different character to the one I remembered. It felt pretty similar for some of the other characters. Lavi felt a lot less of a joker or easy going guy, Kanda felt a lot less feminine than he used to be, and Lenalee felt a lot more “girly girl” than her kind of strong but cute vibe from the last series. There’s a transition to be sure, and while I can’t say I necessarily hate these voices, the fact that they change the characters themselves a bit, is what’s going to take some getting used to.

But the new series isn’t all bad. There’s definitely a HUGE improvement in the visuals and the animation. Shiny is the word I’d use to descibe how D.Gray-man Hollow looks. There’s a very new and polished look to the series, and I’d say the smoother animations and higher production values make quite the case the series perhaps being just one cour. Some of it may because of how many years have passed, but TMS really does make its earlier series look fairly dated with its presentation this week. 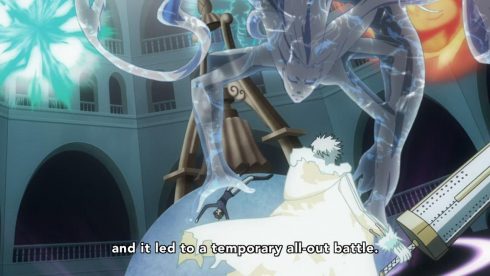 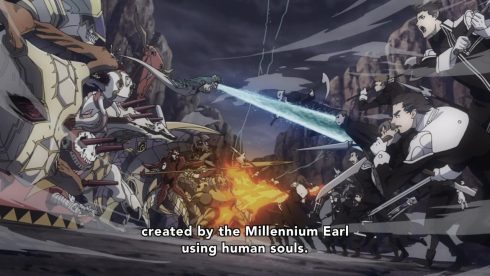 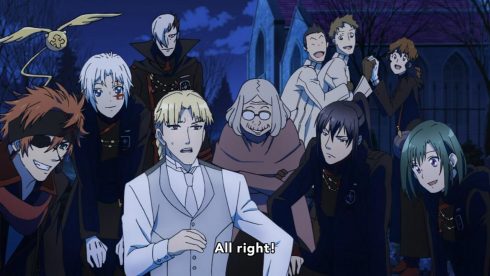 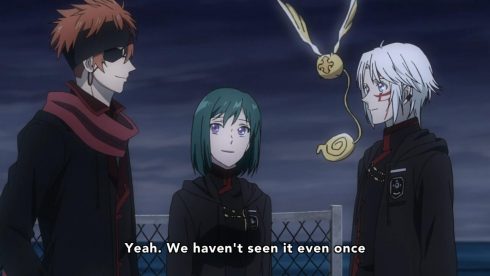 In terms of the story, that’s probably my least favorite part of the episode, and where I felt like the series had a bit of a rough start. When we last left the show (eons ago I know), Allen and Lenalee had just defeated a Level 4 Akuma, after the Black Order Headquarters had just been invaded. What happened immediately afterwards, in the manga, is the Destruction of the Black Order headquarters, and some other notable stuff that this episode just recaps in a quick narration segment from Lenalee.

This series actually picks up right at what you’d call the Disappearance of Cross Marian story arc. So right from the get go, this series has decided to cut a whole 6 chapters worth of content, and a fairly important story arc that basically ends in the destruction of the Black Order. That’s where a lot the jarring transition comes from, because there’s just no context for anime only viewers. At the end of the last series, everyone kind of went their separate ways, here we have them all together, fighting in the opening part of the episode. Then we move on to the arc proper, picking up directly at chapter 165 (you can read chapters 159-164 to cover that blank spot in the story). 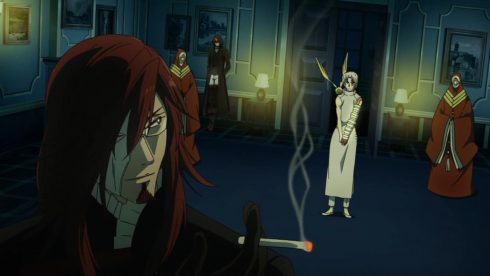 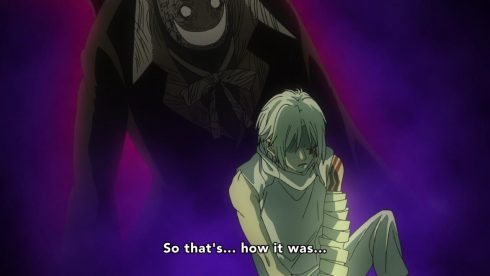 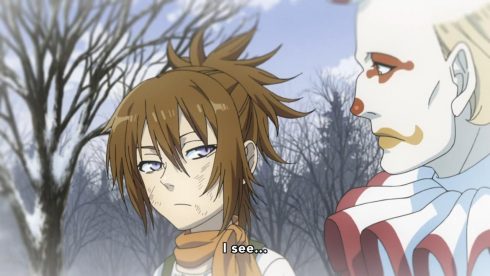 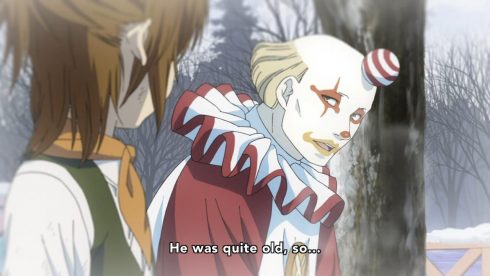 And I suspect the reason for this jump, is to get to the big twist that was revealed in this episode. The big revelation, revealed by Allen’s own Master, Martial Cross Marian, is a doozey. Allen Walker is actually a host for the 14th Noah, the elder brother of Allen Walker’s father figure Mana, and the only Noah that betrayed the Earl and tried to kill him.

Honestly, I felt like this episode and the series, was in just too much of a hurry to get things moving. I would’ve liked an episode to just reunite with the characters and this unique world. To throw a major plot twist, and a pretty central one, right in the first episode, is kind of a gamble. I can see why it was done, because you want to open up with an attention grabbing event, in this case that is Allen Walker’s true identity, and the problematic predicament that he finds himself in. 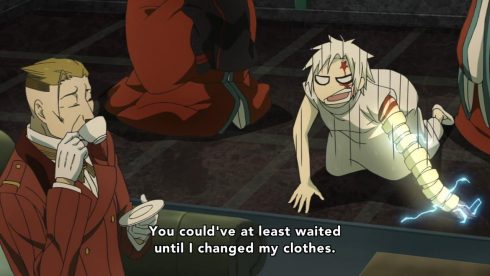 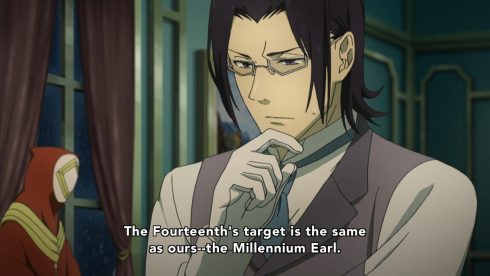 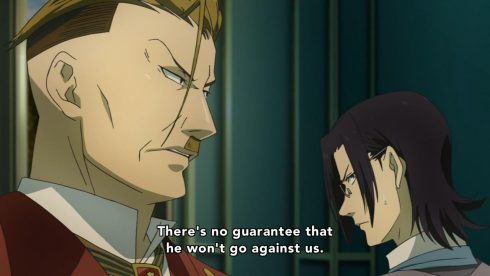 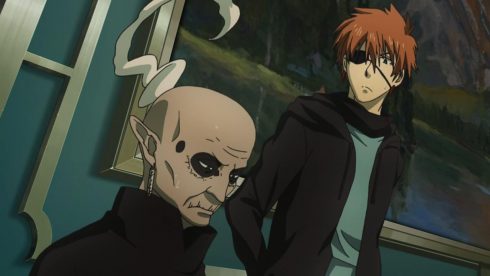 It does set a completely different dynamic from the one we’re used to. Right from the get go, the relationship between the Order and Allen is pretty strained. We have a pretty good idea that Allen is now looked at as a potential threat by them, and that’s definitely going to inform the story moving forward. Plus now that Allen’s met with his master again, and learned a few answers to the questions that have been plaguing him, the situation is entirely different.

But I don’t think that gamble actually paid off, because the twist actually didn’t have the earth shattering impact that I remember it having in the manga. For me, I was too busy trying to get my bearings, and trying to remember what had last happened, to even compute the big change that the show just laid out there. The different voices, the changed art style, all of that didn’t help. 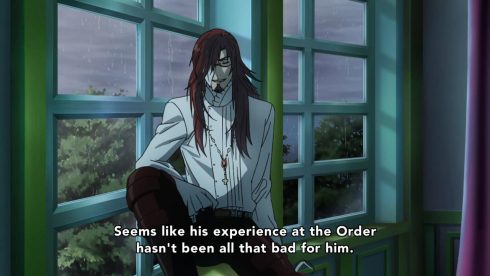 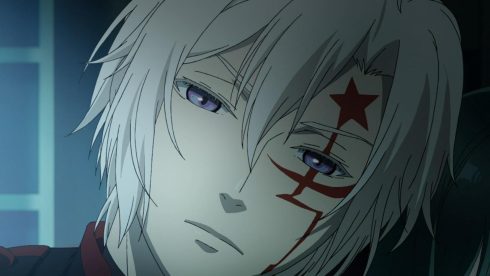 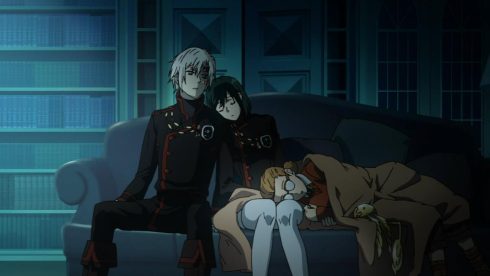 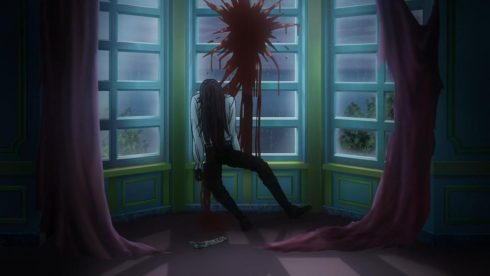 In the end, it just kind of felt like D.Gray-man Hallow had ran forward without me, and wasn’t going to wait for accommodate my lack of context or familiarity. I suppose that’s fine in the end, because while this episode and its big twist was a tragic causality in this transition, we at least are back and running with the story. And now we have Cross Marian potentially killed, and it really does feel like we’ve left the station, full steam ahead.

Its a bit of a mixed bag for me really. I’m glad to see D.Gray-man back, and with better visuals and production values, but the lack of care in the transition between series seems to have impacted the experience, at least this week. I still like the show, and am eager to jump back into this franchise, so lets just say that this is a rough way to do that. I’ll be curious to see how much this one cour series is able to push forward, and how rushed the pacing is. Hopefully the show will just take its time, and adapt the source material with respect and care. I suppose we’ll find out, as this will be another series that I cover on a weekly basis.