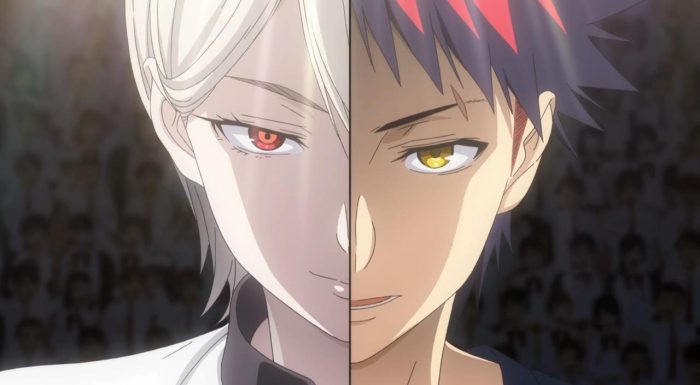 Holy wow… That was a good episode. Shokugeki no Soma is not only back, but its made its return without losing any steam, impact or power. The feeling of having never even left, that feeling that Shokugeki no Soma – Ni no Sara was able to exude so effortlessly? That’s something a lot more remarkable than you’d think. After seeing quite a few sequels to beloved franchises kind of fall flat recently, I’m just glad that Shokugeki no Soma’s still got its mojo. And I say that, because in just one episode, I feel like Shokugeki no Soma’s second season reminded us of everything that made the first series such a success (at least for me). 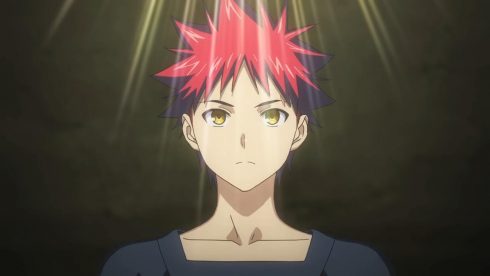 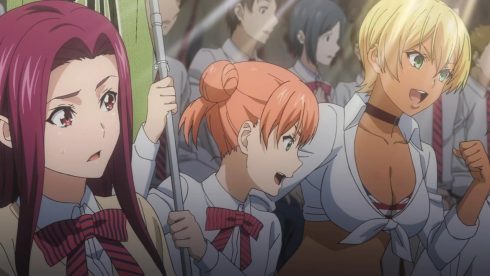 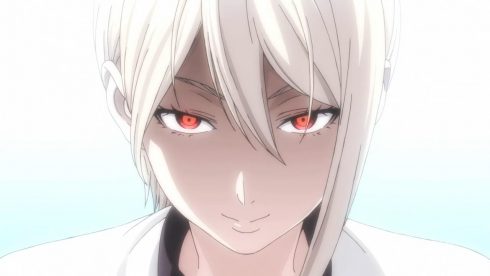 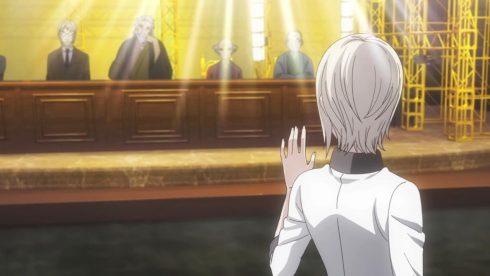 This episode had everything. It had high stakes, surprises and a thrilling momentum from start to finish. It really did feel the show came out swinging with its very first episode. The fact that we had Alice vs Soma in the season’s opening episode, just blew me away. One of the hallmarks of Shoukgeki no Soma’s first series, was how it continued to surprise, marvel and amp you up as the episode started, and then went on to just build on top of all of that. And this episode really was an upward trek, with each moment intensifying the excitement and the urge for knowing what would happen next.

For starters, we had Soma competing against someone who basically beat him in the preliminary round. It was Nakiri Alice who won first place, and who seemed to be kind of like the last boss that Soma would end up facing in these finals. The fact that the show just took the last boss, and made her the opening act, is why its such a masterful piece of entertainment. It doesn’t follow any rules except its own, and good luck trying to predict what its going to throw at you next. 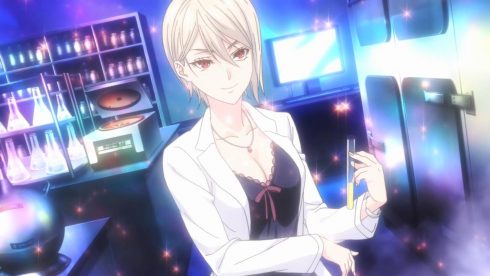 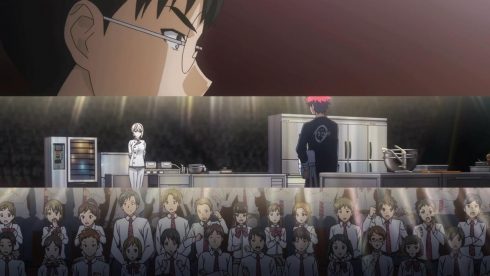 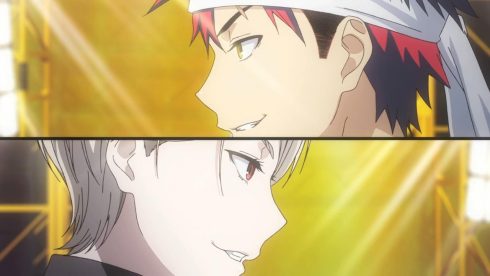 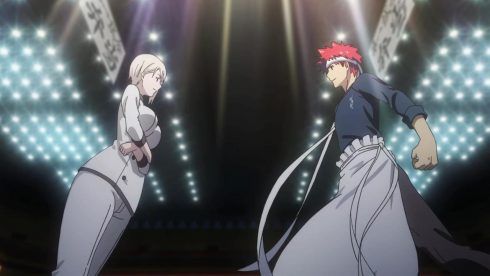 I’ve mentioned this ad nauseum, but its shows like Shokugeki no Soma, where I have no idea what’s going to happen, that really are my favorite things to experience. And while this franchise is all about surprises, there’s definitely more Shokugeki no Soma than just sheer unpredictability. There’s some real heart in this story, and a lot of it comes from a place of deep love for both food and cooking. There’s a sense of passion, both in the series as a whole, and most definitely in this episode, that can’t be faked.

I mean, the crux of the episode is all based around the Bento, and examining what exactly that is, from two very different perspectives. And as usual I love how Soma and Alice both represent two very different sides to the whole Japanese cooking equation. Alice is all about using the latest technology and science, to create something new, odd and wondrous. Soma, on the otherhand, is all about using his creativity and empowering himself through his own background and culture, to create something that’s enough of a twist to be a new entity in itself. 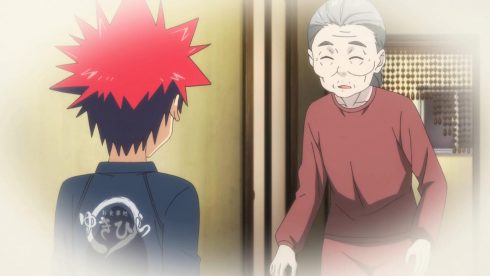 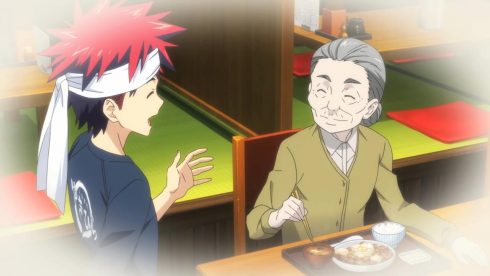 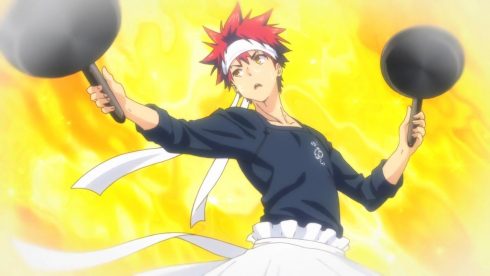 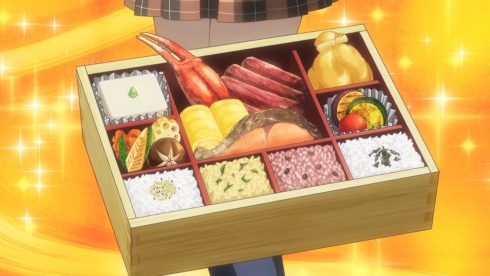 And I like that this series, has a very solid opinion that it promotes throughout. The central message, that cooking requires heart and a deep care for whomever it is that you’re making the food for, is a concept I can get behind. Soma, our lead, lives by that mantra by virtue of being raised by family that run a diner. That whole “country bumpkin” in the big city thing that this show kind of appropriates for Soma, is really fun and hasn’t gotten old yet.

And while Soma and his belief system and drive actually do win the day, the way it happens feels very earned, rather than something that was shoehorned in. Soma’s bento box outright beats Alice’s assortment of Sushi, and its her grandfather himself, who puts it best. Soma’s offering is something that leverages the very idea of what a bento box is, and creates something unique and exciting inside of those constraints. Soma simply goes one step farther than Alice’s whole “Bentos are cold” notion and actually creates something that really is entertaining and fun to experience. 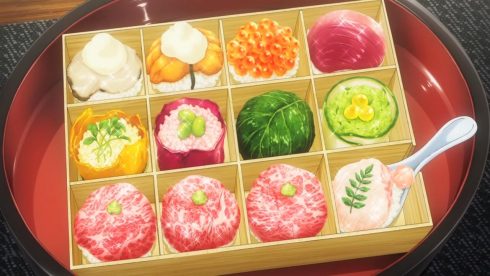 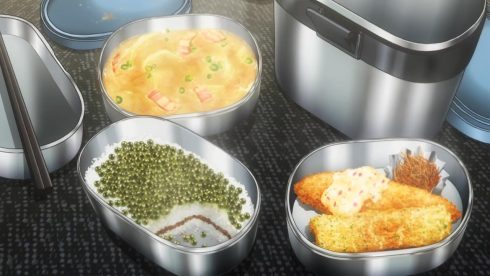 If you’ve ever had a Bento box, then you’ll know what kind of an experience it is, and that its very much in line with what Soma presented this week. A bento box, especially ones that you get at an actual Japanese restaurant, is a bit of a journey of discovery in itself. The way everything is arranged, and what is paired with what, is at least, to non-Japanese natives, a really fun time and a vastly new experience.

To see Shokugeki no Soma really embrace the idea of mystery and surprise inside a Bento, was just heart warming and really personally touching. I continue to love how much I can relate to this show, and the various ideas it presents. Its a stark contrast to say, Dagashi ]Kashi, which while I definitely had the cultural context of snacks/Dagashi and had had some in my own childhood in when I lived in Asia, I just couldn’t get into the core concepts of that show, in the same way as I do Soma. 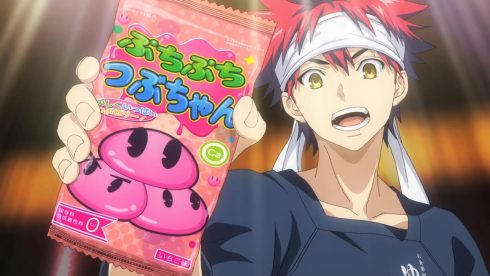 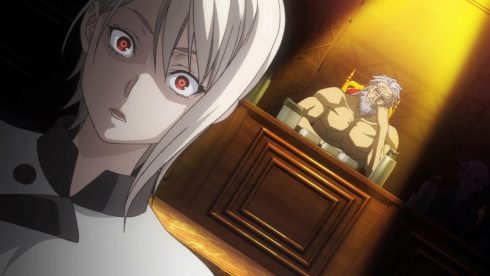 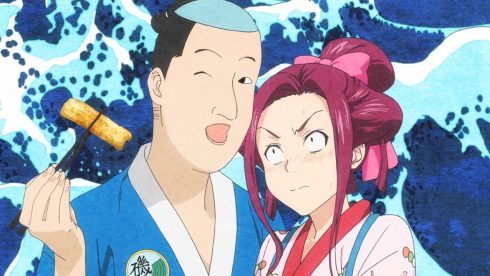 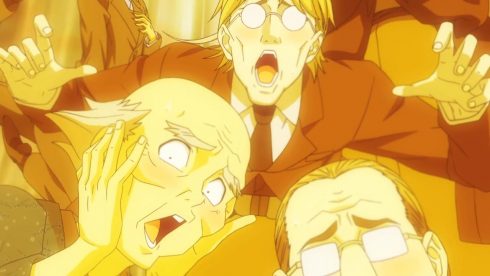 I make that comparison, not just to hate on Dagashi Kashi (which was actually an okay show), but mostly because even the Dagashi (Snack) itself, makes an appearance in Soma’s dish, in a manner of speaking. Soma actually uses a Dagashi sweet to inspire his creation of the “nori bombs” as he calls them. I love how Soma will look to his own culture, and to less “high brow” food for his inspiration and create something truly remarkable. Its just taps into that innate power that a good cook has to make something cool, out of whatever materials he or she has.

Nuff said, the cooking is really deep and well thoughout in this episode as always. But, beyond just being a show about cooking and cooking battles, there’s also a real sense of showmanship in this series. Its gloriously over the top at times, especially with its food reactions. The reactions were a bit hit or miss for me last season, but I found this week’s reactions to be a true return to form. I loved everything from the judges all dancing in the little meadow, to the Frigging director of the school, taking off his shirt and then using Calligraphy to write and announce the winner of the battle on a huge scroll. 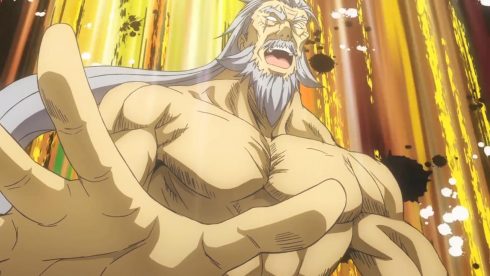 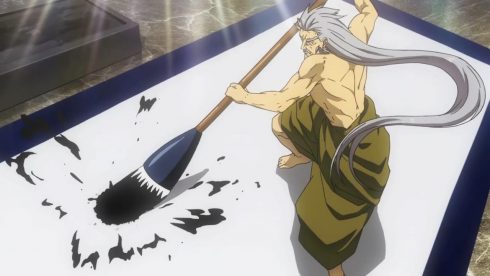 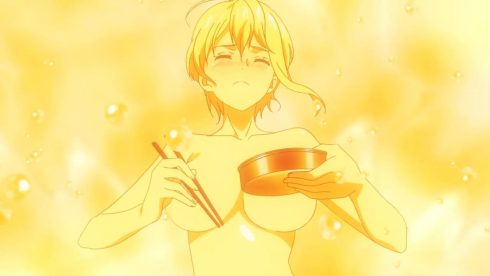 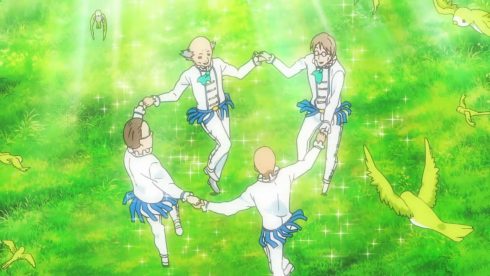 Again, there’s just that love of Japanese culture that fills the entire DNA of the show. And after all of that, despite the fact that she lost, I felt like Alice had some advancement in her own character arc this week. Unlike say Soma’s interactions with Erina, I actually love how Soma and Alice play off of one another. Both are extremely competitive, but there’s a general sense of child like wonder, that the two share when it comes to cooking.

The whole part on stage, when Soma was presenting his dish, felt like the most and relaxed competition I’ve ever seen. And finally, when Soma had Alice try his dish, after he used his final surprise, was a touching moment. We got some insight into Alice, and how much of a complex she has about being compared to Erina. Its a tough spot to be in, especially considering how arrogant and annoying Erina is. 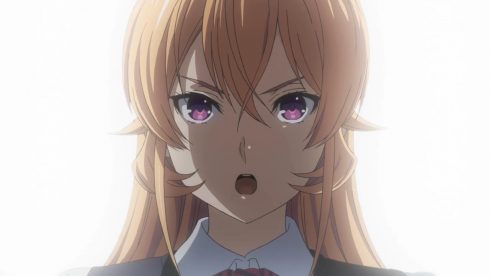 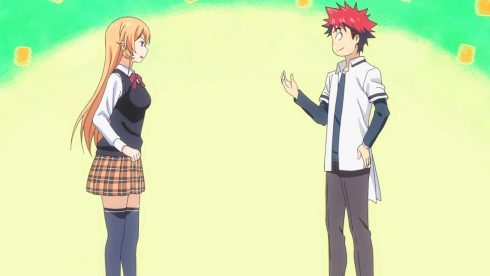 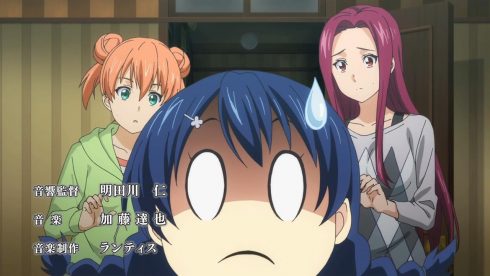 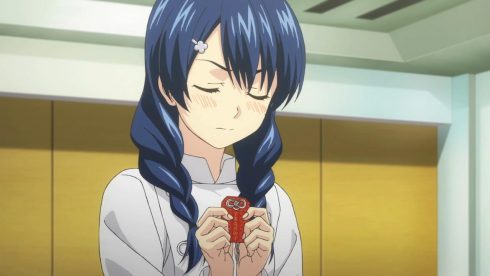 Yeah, my thoughts on Erina haven’t changed since last season. I still don’t like her, and can’t fathom why the show continues to have a spot reserved for her on the heroine table. For me, there are much better options available, whether its Nikumi, or my personal top pick, Megumi.

Speaking of Megumi, we do see her kind of book end this episode. The episode opens with her packing her stuff and being all nervous, and the episode ends with us going into her match. And boy, is her matchup equally as shocking as Soma’s was this week. Megumi is going to be facing Alice’s assistant dude, Ryou. Ryou proved that he’s a force to be reckoned with, and I’m actually thinking that this will be the end of the line for Megumi. It’ll be interesting to see how Megumi stacks up to the rather fierce competition next week. 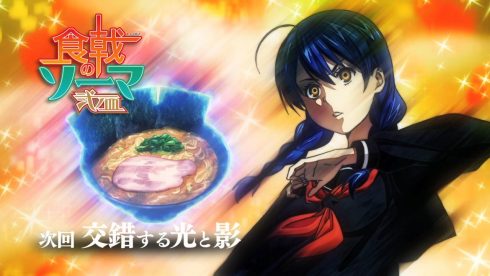 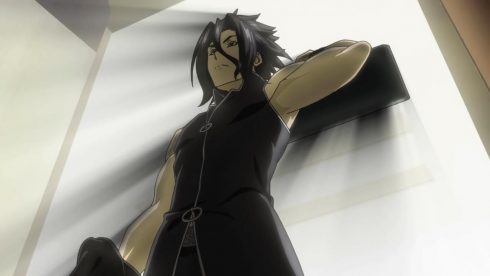 Before I go, I will say this: its a bit sad that Shokugeki no Soma’s second series is only 13 episodes, or one cour this time. I would’ve loved to have gotten another 24 episodes, because God knows I love this show so much. It just checks every box for me, so knowing that it’ll only last us for three months or so, is kind of bittersweet. The fact that we even got it though, is still a bit of a happy surprise, so I guess I’ll take what I can get.

Having said that, however, I did notice that this week’s episode felt a bit more rushed than the stuff we got from last season. The pacing wasn’t atrocious, it was just quick. I felt like I did need a second or two to catch my breath, before I got smacked with the show’s next big surprise. I don’t see it as a problem yet, because while quicker than usual, the show did hit all the notes it was supposed to, and felt like a truly exhilarating experience. I just hope that the series takes its time, and doesn’t rush through anything though, even if it only has one cour to make its case, before it goes away again. Well, I’ll be blogging this series for sure, just as I did the last one, so I suppose we’ll see how it goes.