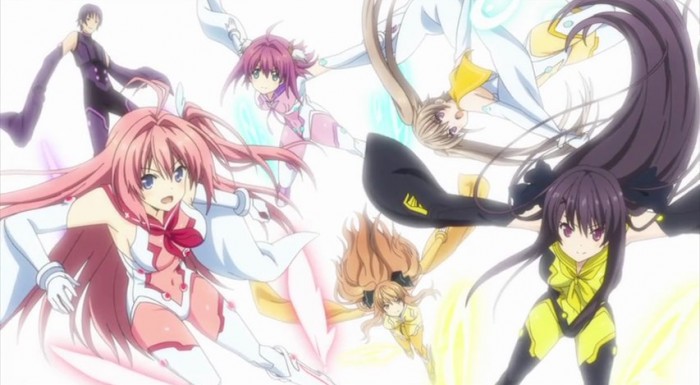 Ever since the announcement of this adaptation over a year and a half ago (in November of 2014) I had been greatly looking forward to it. Some reasons are “understandable” and able to be articulated – it was based on an eroge/visual novel created by Sprite, the same company that produced Koi to Senkyo to Chocolate) after all, and I loved both the anime, the characters, their designs, the story and setting and especially the backgrounds and the background music. As a whole package it was really beautiful first and foremost, I thought, and also had an engaging storyline.

However, there was something else involved when I came across the announcement. Call it intuition of whatever you like, but when I first came across the announcement I felt somehow in my gut that this could be a series that I might be able to enjoy quite a bit in terms of rewatchability – something Koi to Senkyo to Chocolate has been able to provide. I expected similar things from Ao no Kanata no Four Rhythm (also know as “Beyond the Sky, Into the Firmament”), then, and as the months have passed I had been keeping track of game summaries, watching footage of the game while it was played, listening to clips from the VN’s background and the rest … and I had been very happy with what I had seen. 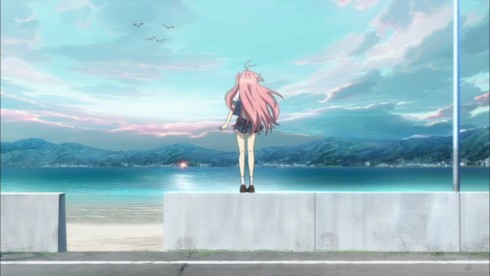 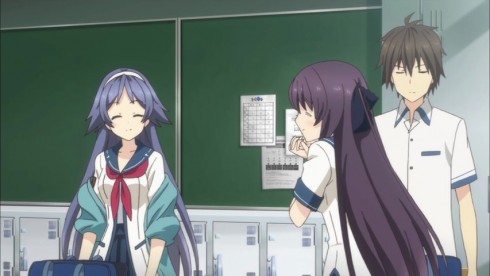 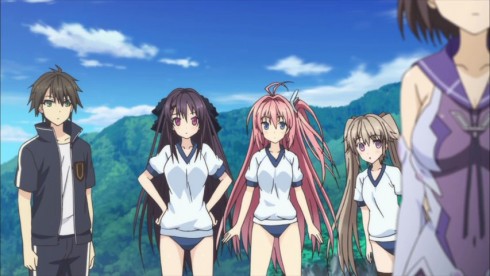 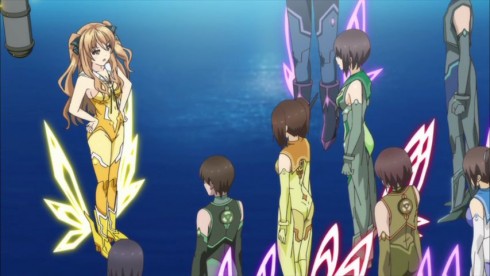 Here is the summary of the story as outlined in the visual novel: “The story is set on an archipelago of four islands far south of Japan or even the South Seas. It is all but a different world from modern Japan. From the discovery of anti-gravitons came the dream invention of anti-graviton shoes (“grash”) that let people fly the skies. They introduce people to a new realm by enabling flight with just one’s own body strength, without feathers or engines. This led to the rise of the sport of “Flying Circus” (a sort of aerial dogfight/race). Kurashina Asuka transfers into Kunahama High school, where she meets Hinata Masaya and Tobisawa Misaki, finds out about the aerial sport that’s rapidly gaining popularity—Flying Circus, or FC for short—and, fascinated by it, immediately joins the school’s FC Club. She and her teammates sometimes clash, but they also support one another in the pursuit of their respective goals as they take on formidable rivals and look to triumph in the summer FC tournament.“

As I mentioned this is an anime adaptation of an eroge/visual novel, but I don’t think that should discourage viewers who are not well-disposed to those kinds of genre. If anything else it may be more accurate to regard this series as a futuristic/science fiction “sports based” story, but unlike the source material the adaptation did not introduce any elements of romance whatsoever, and the main characters of the adaptation switched from Masaya (the male lead of the visual novel) to Asuka and Misaki. It became much more of a light sports themed series, yes, but it also had secondary themes that kept in line with the sports aspect as well, including Masaya overcoming his past traumas associated with the Flying Circus game. This was a pretty bold decision by the staff, I thought, but in my opinion it worked out fairly well, and in doing so they avoided all the potential difficulties associated with “which romantic route does one adapt” side of things. 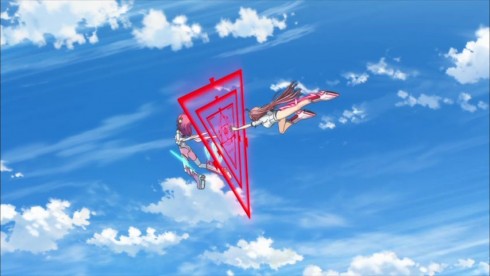 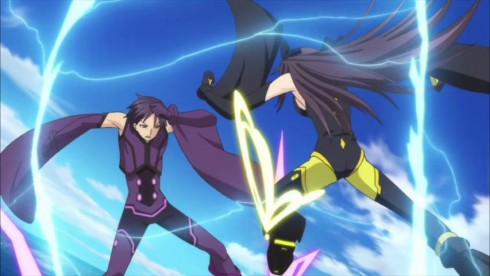 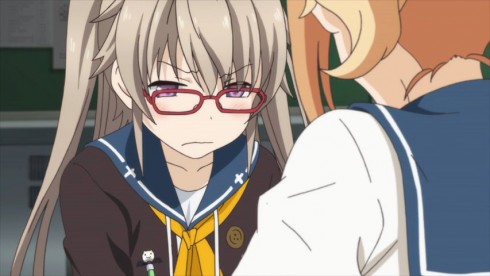 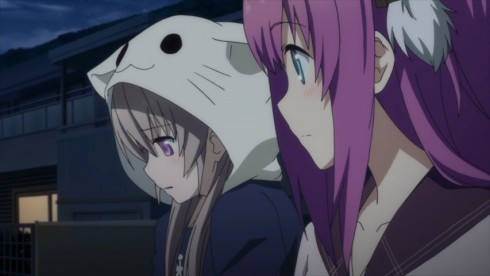 In terms of the strengths of the series, I would have to give an especially big shout out to the art. It may be that I just really like the works produced by Sprite, but I give kudos to the studios in their adaptations of the game’s art as well, something Sprite has developed both a signature “look” of and have developed a good reputation about. The visuals and background scenery (especially the sky panoramas) are positively lovely and really helped paint and strengthen the entire semi-futuristic setting of the story proper, and I thought the character designs were quite excellent as well.

Another strength that I did not notice but which gradually crept up on me, as it were, was the aspect of the series’ sound – admittedly from the get go the VA performances were quite good, with the VA for Asuka especially nailing her performance, I thought – Asuka comes across very strongly as both endearing and a riot. XD But the part that crept up on me was best symbolized by the … umm … quiet and unobtrusive (?) aspect of both the OP and the ED. Initially I only thought of them as “appropriate” but not adding much “extra” to the series. But as time went on they began to “come into the foreground” more and more, and in so doing the background music of the series also became more prominent The last time something similar had happened to me was with the Nagi no Asukura series (which I also enjoyed), and when I went and looked at the staff for the series it was actually the same singer that sang for it and Ao no Kanata – a good choice, in my mind! 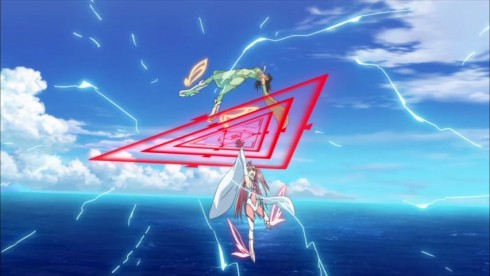 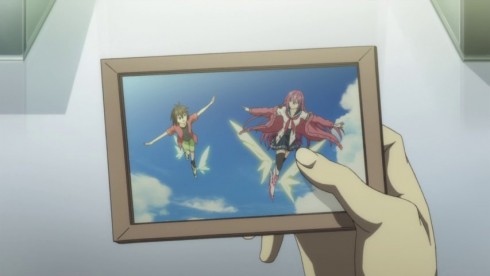 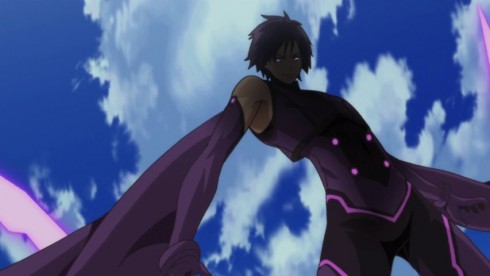 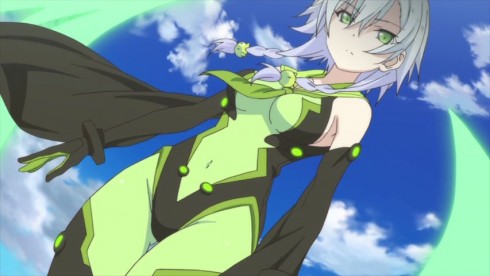 But without a doubt one of the greatest strengths of the series was how it ended. The build up to and then the final match between Asuka and Saki and positively AWESOME. What a great way to end the series! And even though most everyone knew what was coming many viewers (myself included) were floored by the final episode and loved the way the story was finally wrapped up – once again proving that so much of the success or failure of an anime series is not reliant on the use or avoidance of “tropes” (that abysmally over-wrought and crudely abused word nowadays) in and of themselves, but rather on the skill, care and effectiveness in presenting the story as a whole. Tropes are present and have been used for centuries (perhaps even millenia) for a good reason – in the hands of a skilled artisan they work.

The final match in “hyper mode” was exhilarating – seriously. The two of them increased their speed and pursuit and evasion of their opponent to such a degree that the contrails from their shoes seemed to meld together into a single orb, like a miniature sun shining at mid-day, and in the midst of that incredible combat … as all knew was coming but on viewing it all held their breath … Asuka pulls off an utterly brilliant move, combining a millisecond barrel-roll and a flying fish style turn and scoring a point to win the match. Needless to say – the viewers (in the anime and “outside” of it) were blown away. I only noticed how intensely I was engrossed in everything after it was over – I had been holding my breath for a few seconds! XD 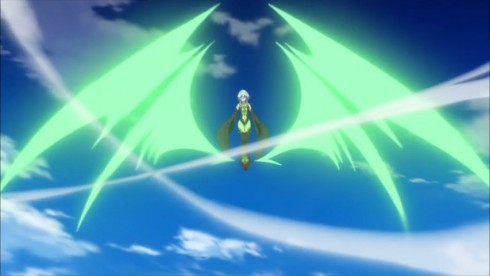 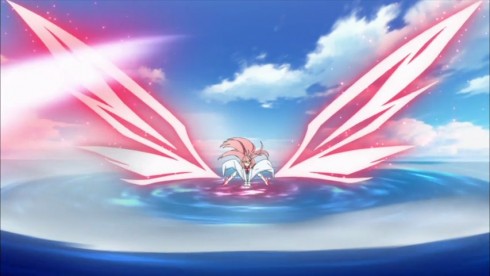 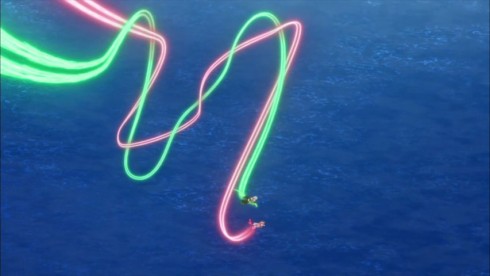 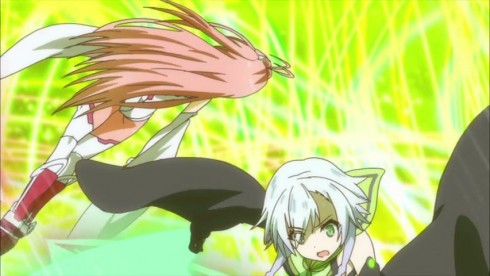 For me this series was a success from beginning to end, and in most every way. I loved the manner of the adaptation, the way the characters were developed, the visuals, the world building, etc. The audio aspects were initially only “pretty good” for me, but grew on me over time and unsuspectingly came to stand in the “front row” by the time the series was over. I can say that this series was not only be archived by me, but I could already tell by its’ end that it would have a high degree of re-watchability. It was also, which for me is perhaps one of the most important aspects to any series, one of the weekly anime I most anticipated every week during the Winter 2015-6 season, and that anticipation stayed consistent and strong throughout the season proper. That’s proof that the studio and the writers were doing something right!

When all is said and done I was torn between whether to give the series a B+ or an A- series, but in the end opted for the B+ grade. If you enjoy sports themed anime and did not watch this series because of it’s source material being a heavily romance themed story this may be a series that has flown under your radar. I can only suggest that you give it a chance. Like the audio aspects of the series it may slowly creep up on you and become something much better than you anticipated! ^^