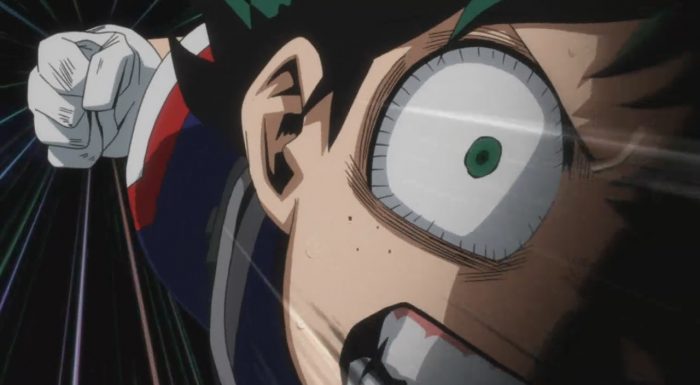 And here we are at the end of season 1. Which is ok since they did announce that Season 2 is going to happen! We don’t know when it will happen, but at least we know it is coming. That allowed this episode to be a wholly positive event rather than just a kind of bittersweet farewell to the show. Which is good since this episode was so strong that you’d want to be able to walk away from it smiling. There were some tough and close calls there for All Might and Deku, but in the end they managed to walk away from this in one piece. Of course not everyone got away from this unharmed, but considering the danger it was about as good a result as anyone could have hoped for. The villains basically failed and most of their members were captured or injured. Really only Kurogiri and Tomura managed to get away from the heroes. They were technically the most dangerous members, but regardless they aren’t going to be causing trouble immediately. 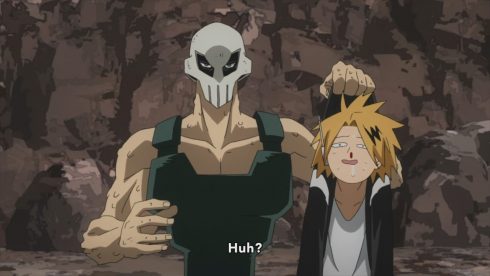 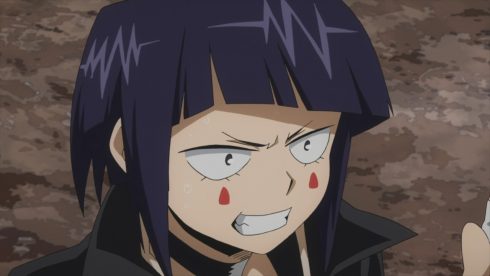 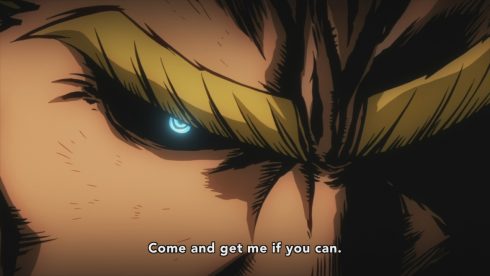 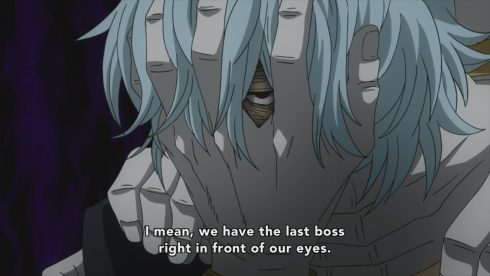 This wasn’t a perfect situation in the slightest though. Things did get pretty close to a disaster anyways. Kaminari and company were put in a bad spot by the electric user who was interfering with the signals. We knew that guy was hiding in order to continue disrupting communications, and when he came out things got pretty dangerous. Even the clever move that Jirou was going to try was spotted and failed. In a sense that does work. This guy was probably on a slightly higher level than the regular grunts. A kid’s attempt to be deceiving and tricky could fall flat like that. In a sense it was kind of refreshing to see a villain that was very much on his game and put the good guys in a bad situation. It also made it very easy to enjoy seeing him get shot and put down after he was such a creepy piece of work.

Things were pretty bad for All Might as well. Though he was able to pull off a much better bluff. So long as he stayed in that muscle form he could basically intimidate his way out of things. Unfortunately Kurogiri was a pretty calm and rational person. If he had been bluffed as well this would have ended pretty simply, but instead it nearly ended in All Might dying anyways. He wasn’t in any condition to fight off Tomura. The most he could do was stand there and get killed. In that sense Kurogiri might be the most problematic of these villains. He’s very calm, has a powerful quirk, and can respond to unexpected situations pretty well. Even managing to deal with Deku’s surprising charge without losing his focus. 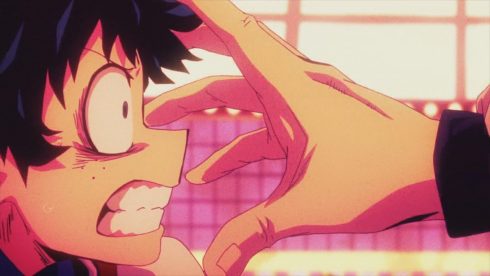 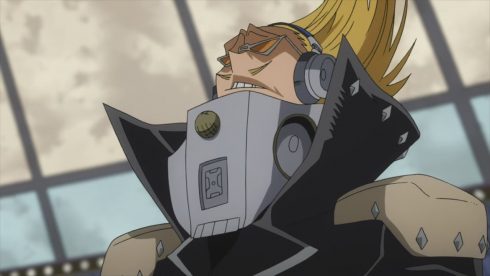 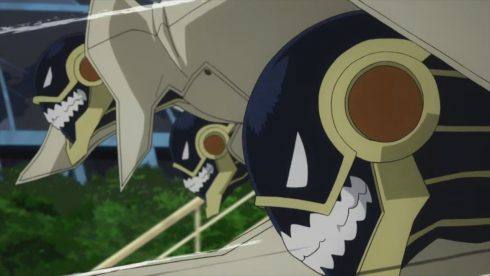 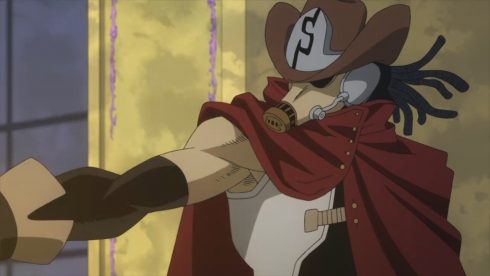 Good freaking timing by Iida and the teachers. They just made it in the nick of time there to clean up the situation. The grunt villains were starting to pick themselves back up and of course Deku and All Might were moments away from death there. Instead the situation gets resolved pretty well. Only letting two villains get away. Good thing the teacher’s had someone who could attack from such a distance. Nothing more enjoyable than seeing Tomura get shot up like that. Getting hit in his arms, legs, and his attacking hand. He’ll bounce back sure, but he’ll definitely be feeling that one for a while. Even Thirteen got a chance to get some payback in there. Almost managing to get a hold of Kurogiri who really had to rush to get away with just Tomura. There wasn’t much they could do with all the pro heroes suddenly hitting them. Was nice to see what some of the pro heroes were capable of. Can see how darn strong those guys are and why they were brought in to teach at this school.

Credit still to Deku who did very much buy All Might time. Breaking his legs again, but there wasn’t much choice here. He was the only one who knew that All Might would die if he as attacked at that point. It really is who Deku is. He’ll rush forward when he knows someone is in danger, even if it means risking his life in the process. He didn’t resolve the situation with a punch, but rather his presence. The distraction he created was enough in this case. It does make it clear though that he needs to adapt to One for All sooner rather than later. He’s already been picked up on the radar by Tomura and will be a focus in future attacks. 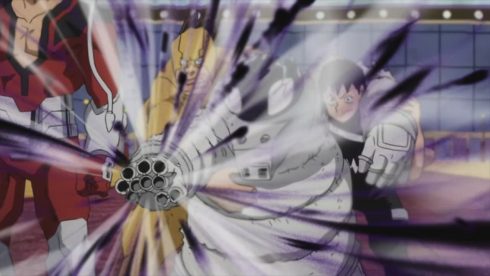 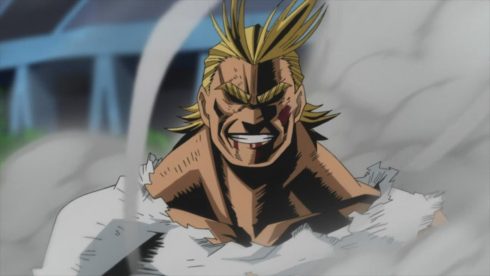 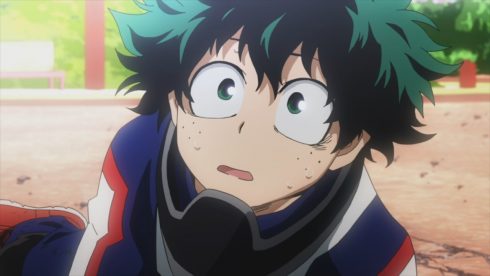 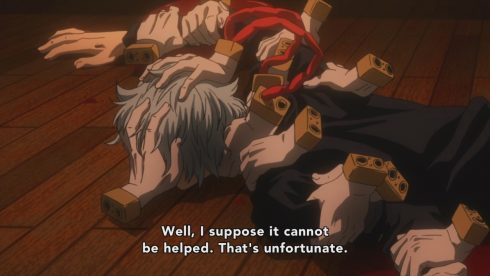 Got a picture of the Villain Alliance and their situation. It does seem like they themselves are a symbol for those who are against All Might but cannot for various reasons make an open attack. Basically Tomura is being used as a tool by those people. Doesn’t seem like a very savory bunch that he’s working for. Will have to keep an eye on them in the future.

I agree with All Might that the villains really screwed up this time around. The students were inexperienced and had some tough moments…but they are going to be stronger from this. Having faced such danger and adversity in their first year at that high school….they are going to be pushed so much harder to improve. They learned more from this than from any class. They know how dangerous the world truly is and if they want to be heroes they will have to mature in order to catch up to individuals like Aizawa and All Might. Some are of course going to be really shaken up by this, but it’s an experience that could be more beneficial than negative. 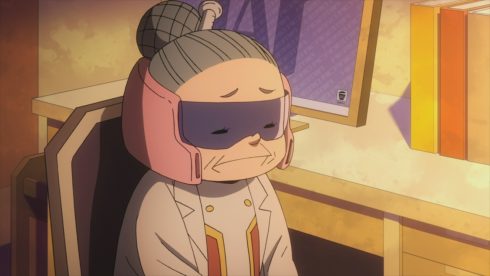 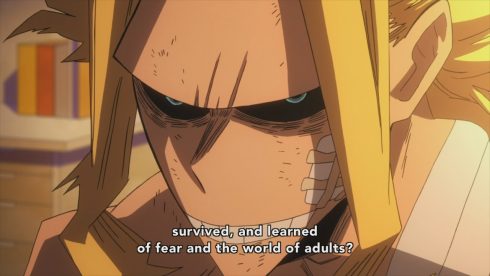 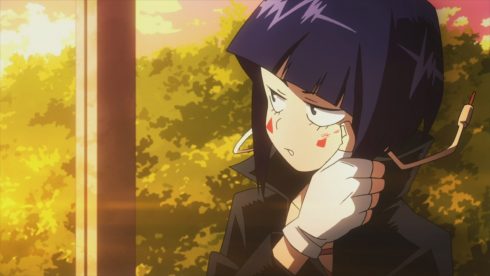 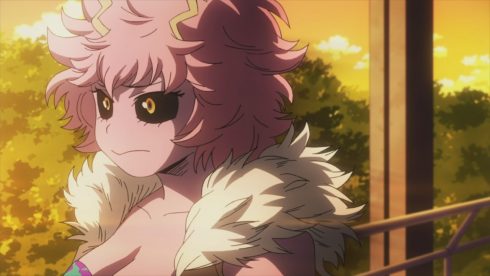 Here we are at the end of season 1 and it has been a great ride. The show took a couple episode to get its feet under it, but once it did the ride was great until the end. A really good shounen show that managed to handle the concept of kids growing up to be heroes in a powered society in a good way. We really only got a short ways into what is a big series. I’m sure we’ll be back with Boku no Hero before we know it. It would be nice to just continue onward without stopping at all, but that is just how things are these days. A pretty big rarity for shows to go 2-cour and not take any breaks at all. I most certainly enjoyed covering this series and will look forward to what comes next.

The show really did a nice job from start to finish. We got to see both how powerful these young characters are, but also how far they have to go. Instead of just making them the elites and the adults look utterly useless, it was the grown characters who played critical roles. There was no way for the students to handle something like Nomu and backup arrived just in time in the latest episode. A great deal of care had to be taken in the big ambush here because of how hard it would be to handle professional heroes. 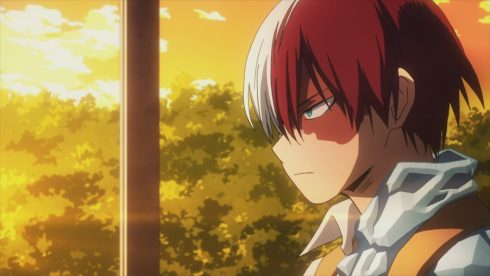 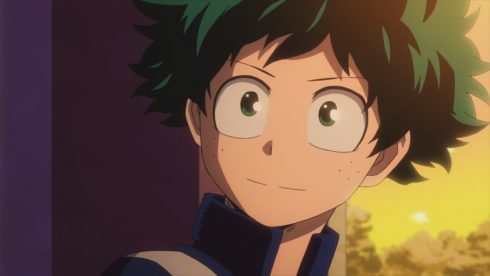 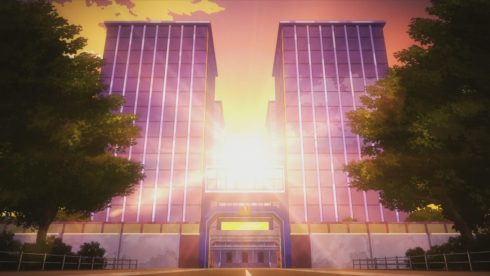 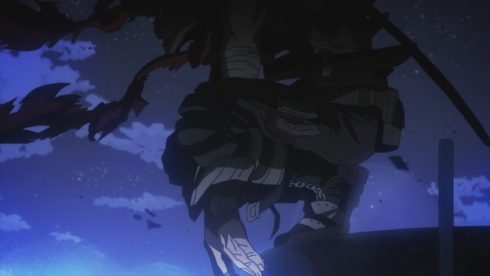 Will be interesting to see how Deku evolves in a second season. The guy has tremendous talent, but it is a long road for him to master One For All. There’s no way he can really get anywhere if he has to constantly break fingers and limbs when he really wants to take action. I agree with Aizawa that a power that constantly forces him to be saved isn’t useful enough. But it’s a tough thing since the moment he masters that power that immediately rockets Deku up to the status of a very powerful character like All Might. It will be good to see just how the show deals with his strengths and weaknesses.

It isn’t an easy situation at all. All Might is very much vulnerable to attack and that is only going to get harder on him. Possibly reducing his activity limit even more. Honestly outside of teaching a class he might not have enough in him per day to do much of any hero activities. Just slowly reaching the point where he’s going to be unable to fight any longer. Still, he really is a top notch heroic character. Risking it all for those he has to protect and serving as an impressive symbol of peace. 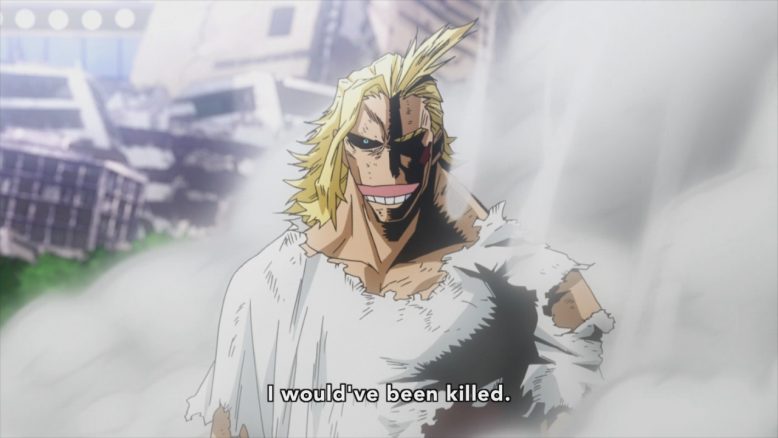 See you in Season 2

It was a lot of fun to watch this show and I can’t wait to see more of the cast develop in season 2. We saw some development out of Bakugo and hints at how the others are going to develop from this point onward. Certainly Todoroki has a story to tell and likely will develop in the coming season. Also did get a good laugh with him realizing that he almost froze the invisible girl without realizing it….close one XD. There is plenty of story to tell here with Deku’s growth as a hero, All Might’s situation, the Villain Alliance, and the weird guy shown at the end there. There is bound to be a lot to enjoy going forward. Will say goodbye to this show for now, but it is nice to know it won’t be for too long.