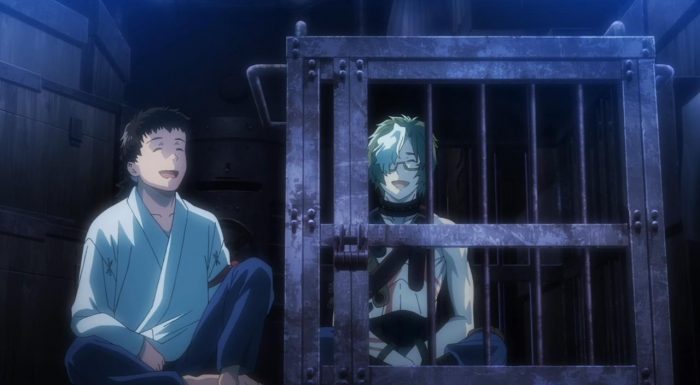 Well that was certainly…. Unexpected. I had mentioned last week that the route that Kotetsujo no Kabaneri seemed to be taking was, at its worst, generic and at its best, predictable. I was hoping, despite the very clear indications to the contrary, that the show would throw some loop or curve-ball into the fray. A twist that would just make things exciting and interesting again. And while I don’t think this week’s episode (despite its best efforts,) is able to quite do that, it does at least feel like a step in the right direction.

The big headline of the week isn’t just team Ikoma’s pure and utter failure, but its the cost and consequence of that failure, i.e Takumi’s death. Takumi’s death, is a powerful card for this series to play, if only because its a move that’s had the necessary ground work laid out for it to succeed. Takumi is a character that I care about, and I’ll hazard a guess that a decent amount of the viewers of this show share a similar sentiment. Takumi and Ikoma’s friendship, their bromance dynamic has been really reinforced and built up in this series, and it has slowly grown into one of the show’s big strengths. 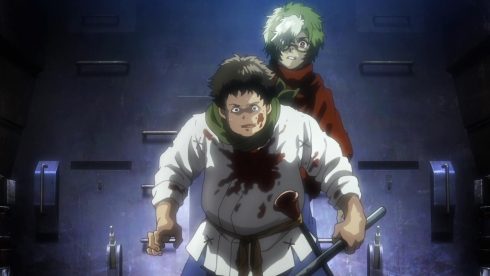 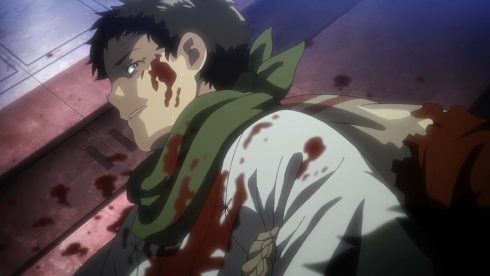 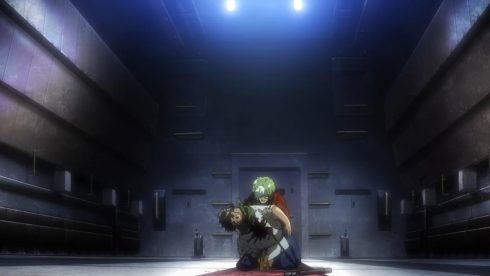 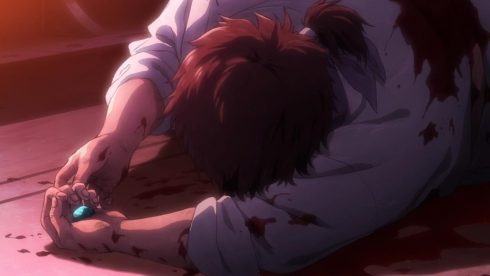 Takumi himself, as a character, has had quite a beautiful arc. He started out as the skeptic friend, one that seemed like he was almost afraid of Ikoma at first. We soon saw, however, that Takumi had the heart, the goodness and the common sense to see Ikoma for who he really is, and back him up every step of the way. Ever since that moment in episode two, that moment where Takumi proclaimed that Ikoma wasn’t a Kabane, but rather his friend, he’s been easy to like. And that’s only been developed and reinforced in all of the show’s following, quieter moments, where he’s banded together with Ikoma and really been what you’d call a best friend.

So when Takumi gets killed, protecting Ikoma, its a powerful moment. The whole fact that Takumi actually feels guilty for not having protected Ikoma earlier in the series, plays well with the general theme of guilt and atonement that this series has been striving towards. The fact that Takumi dies at all is actually kind of surprising, because this episode does such a masterful job of fooling the audience. Whether it was intentional or not, Biba’s character and his generic nature have definitely given this show a sense being something little more than “standard fare”. Biba’s the stereotypical villain, he’s outlandish and he’s got a plan to “eradicate the true evil in the world”. 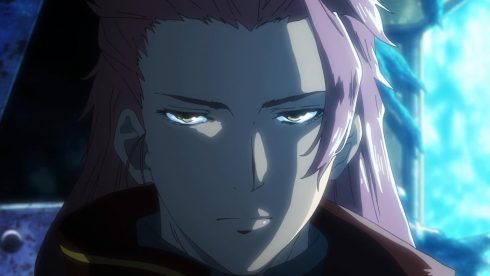 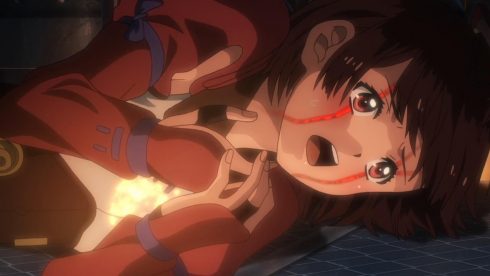 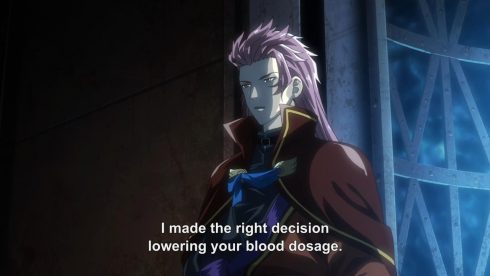 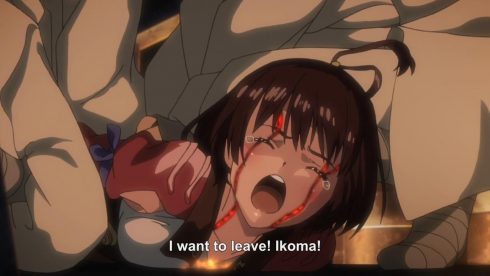 Its Biba and all the predictability that he brought to the series, that makes the big death scene all the more surprising. Takumi’s death isn’t conventional by any stretch of the imagination, in fact it’s the exact opposite. The standard idea would be that Ikoma and Takumi and the rest end up actually winning and taking down Biba, and then Biba in a last ditch effort does something really crazy and destructive, that forces everyone to band together to stop him.

That’s what I expected anyway, but what the show delivered was a sobering dose of reality and a shattering of all hope for Ikoma. Yes, I’m under no illusions that both he and Kurusu are not actually dead (It seems like falling off a train is the new way to survive imminent death), but… Takumi dying is a real sense of loss. There’s something that both Ikoma and the audience have lost, and that’s whatever it was that Takumi brought to the table. Even if you didn’t quite like Takumi as much as I did, you can’t argue that there’s a genuine sense of surprise when Takumi actually does get killed. 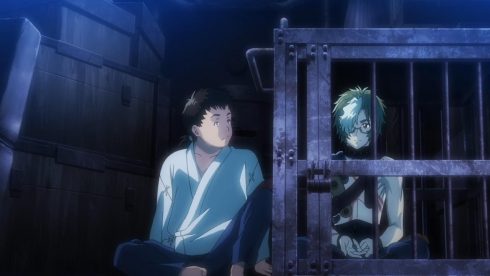 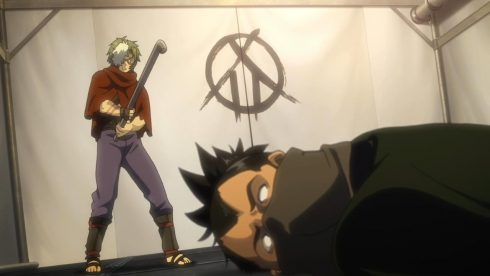 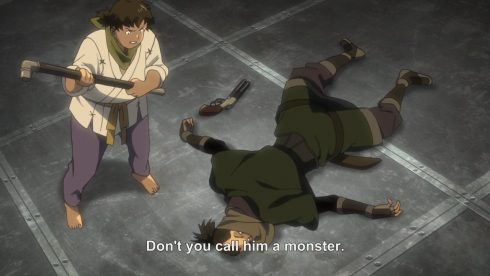 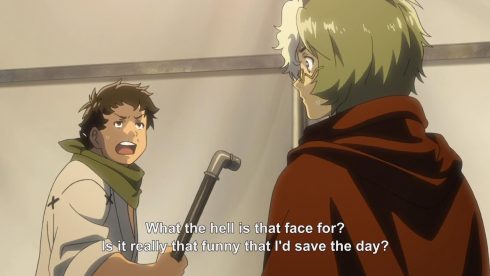 Maybe its because we haven’t had a member of the core group actually die, but Takumi’s death feels jarring and alien. And while all of that is definitely interesting, what intrigues me the most is how clearly Takumi’s death seems to be setup in this episode. Takumi ends up doing a lot more than he usually does, and even saves Ikoma’s butt in a pretty deadly battle. On top of all of that, Ikoma and Takumi have a nice quiet moment to themselves. If that’s not a decent chunk of death flags being triggered, then I don’t know what it is.

But the reason its all unexpected is because something like this just hasn’t happened yet, in this series. The reason it works, is because it feels like something more akin to what would happen in real life. Ikoma’s big plan, no matter how quick and clever witted, isn’t something that’s going to go off without a hitch. Even if Ikoma’s little rebellion had succeeded, I doubt it would’ve done so without some kind of casualty. This episode, and where it ends up, is in stark contrast to how everyone in the Kotetsujo was able to survive against that Colony all those episodes ago, despite Mumei and Ikoma’s bungling. 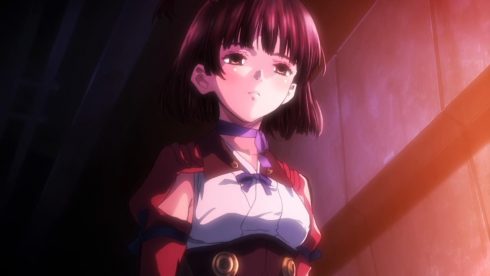 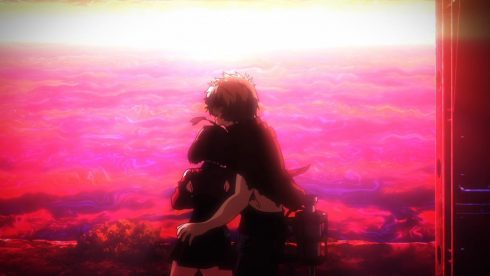 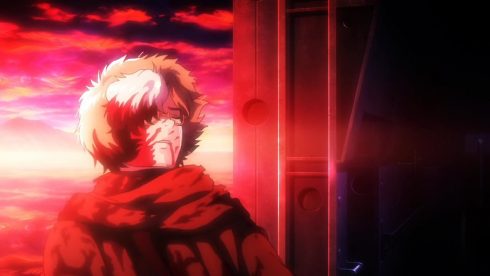 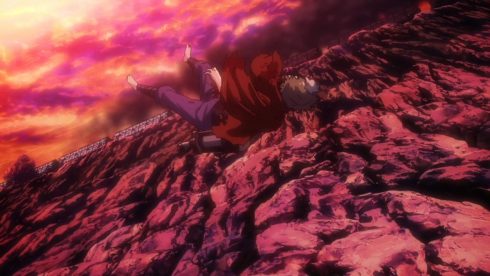 And at the end of the episode, beyond just Takumi’s death, we have a situation that is dire to say the least. Ikoma’s been shot and knocked off the Train, Mumei’s under Biba’s full control, and there’s a decent chance that Biba plans to have everyone killed as soon as Ayame does whatever it is he wants from her.

Biba himself continues to be a sticking point for me, and does kind of offset some of the power of Takumi’s big death scene. Much like how I surmised in the past few episodes, he’s a sociopath who believes that killing his father and taking revenge for all the men he lost, is more important than anything else. He sees the Kabane as more of a force that masks the true evil, which he sees to be both his father and the current societal system at large. I get what the show’s trying to do here, but there’s just nothing deeper, beneath the surface that makes me really want to root for or even hate this character. He’s just a misguided fool, and a broken guy who was clearly (and rightfully so) traumatized when he had to lead a force against the Kabane at the tender age of twelve. 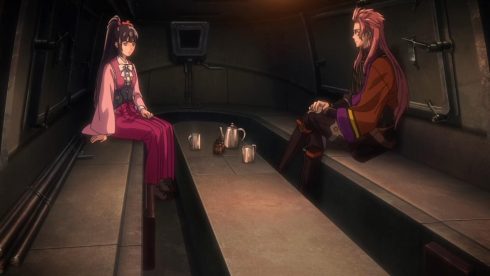 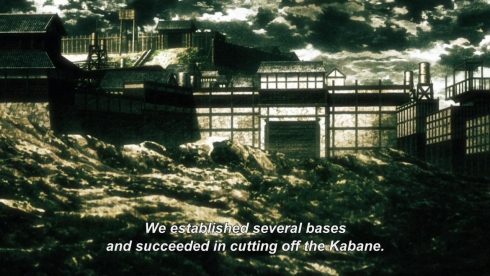 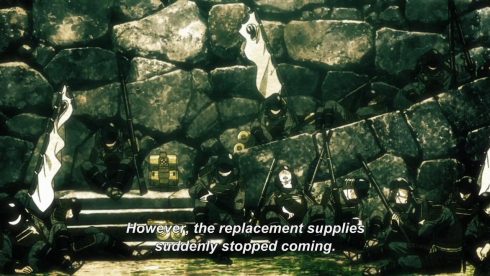 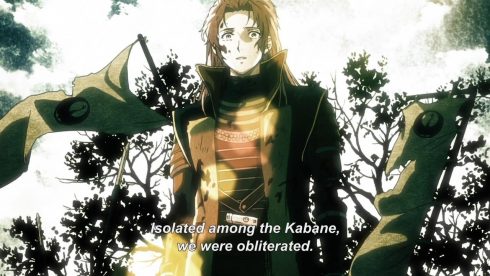 Okay, that was kind of surprising. I was definitely startled when I saw that particular little revelation play on screen. Biba was a leader at the age of 12, and was basically left to die by his father? He survived but saw unimaginable horrors and probably was too young and weak to really do anything about it. Yes, his little backstory does put some context into why he’s as messed up as he is, but my earlier point about a lack of depth still stands.

Even Ikoma’s big cry, and shock at how twisted Biba’s reaction is to his pain of losing a dear friend, doesn’t do anything for me. And while we’re on the topic of misgivings, I will say that it does kind of lower the excitement levels when you’re expecting both Kurusu and Ikoma to come back next episode. Of course, given how bad the situation has become, I’m almost a bit worried about the series writing itself into another corner. 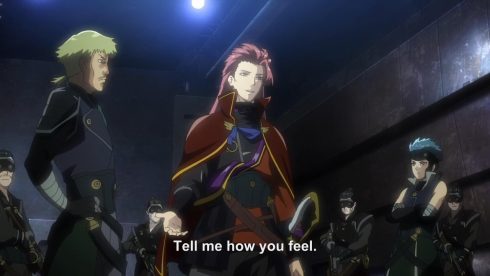 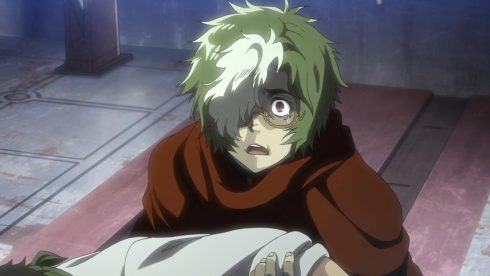 Based on past experiences, whenever Kotetsujo no Kabaneri creates an impossible situation for its characters, it rarely provides a logical resolution to it all.  Takumi’s death is shocking, Mumei actually being under Biba’s mind control is tough to watch, and seeing the Kotetsujo people utterly fail and get shut down by Biba is definitely unexpected. But, I can easily guess where the story’s going from here, and a lot of that hasn’t changed. Ikoma might bow out for an episode or two, but he’ll be back, maybe with Kurusu in tow, and will save the day.

That’s the standard ending, but I hope the show actually channels whatever power lead to the idea and decision to off Takumi. I hope there’s another wrinkle that brings this series up a notch again, because now that Takumi is dead, the show doesn’t really have much else to offer. None of the other characters are particularly all that developed or important, at least in my eyes, so them dying or living is almost inconsequential. Its all up to whether Ikoma is actually able to succeed at defeating Biba, and more importantly, whether Mumei is actually saved. 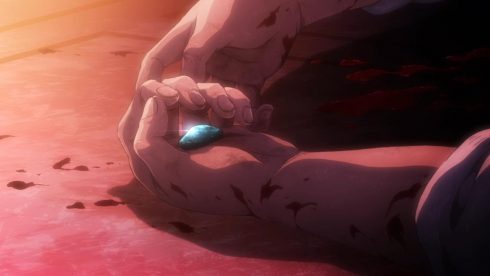 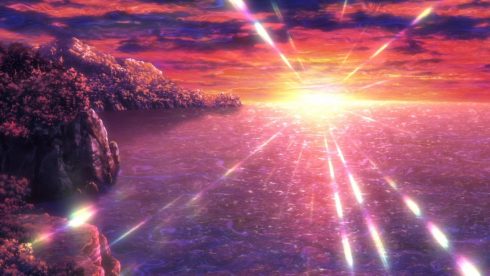 Its at this point, in my humble opinion, that the series is truly at a cross roads. It can end in a generic but happy manner, or it can do something completely left field and interesting. Much more so than any other series, this final decision is what’s going to determine whether Kotetsujo no Kabaneri is remembered as a fun but okay series, or a great one.