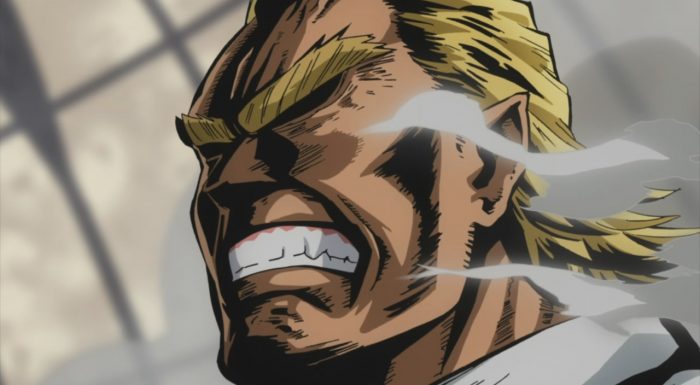 If nothing else this episode was a crash course for how utterly dangerous the world of heroes and villains is. It was a near death for Deku, Tsuyu, and Mineta there. Not like Aizawa was in better shape either by the end of this. This is a dangerous profession. People may be excited about using their quirks in spectacular ways, getting famous, earning big bucks, but in the end it is dangerous. When you face a threat like Nomu then you have no one to come in and save you. It was an interesting mix of an episode as we saw all the good from the students prevailing over thugs with quirks. But then we saw how bad things could get with Eraser Head being utterly demolished by that monster. It’s a pretty dangerous situation, but the kids managed to survive for long enough. While they might have hoped to do otherwise….it really all has to be left up to All Might. He doesn’t have a ton of time in that form so it will have to be a very short showdown. 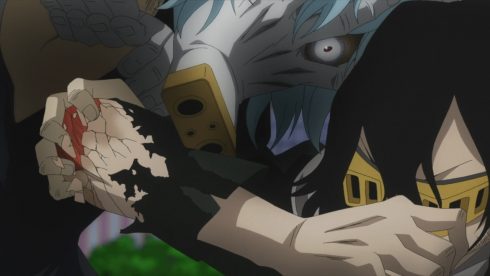 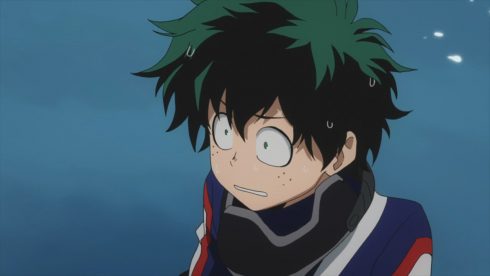 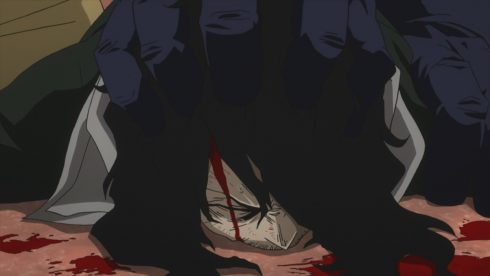 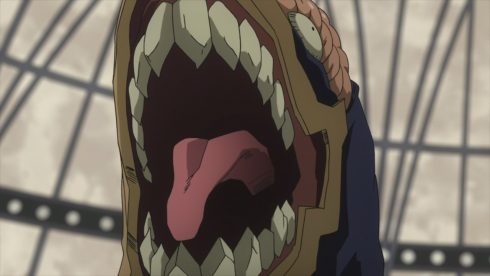 And talk about a brutal episode. This show didn’t hold back at all for showing how bad things can get. It was built up slightly with the damage Aizawa took from the Facepalm man, but was far more horrible when he was getting beaten by the Nomu. Just being taken apart like a toy. No harder to shatter his bones than to snap a twig. Just that this twig has blood and a sensation of pain! It was just brutal and horrible. There was a fair chance that Eraser Head was going to end up dead before All Might could arrive. It’s a good thing they have an OP healer at UA, otherwise we’re talking about hospitalization lasting many months for Aizawa.

But they did manage to keep the tension going. In a sense giving the characters the same kind of shock as some of the viewers. This was a situation where things were about to go horribly. The villains were very likely going to kill Eraser Head and kill a fair amount of the students. Of course they couldn’t linger since help was going to arrive, but they had enough time to kill Deku, Tsuyu, and Mineta. With a person who has a warp quirk they had the options to take their time and push it to the very last second. This could have been a horrible tragedy if All Might didn’t get there in time. I’ll presume it was thanks to Iida running off for help. That move literally saved lives. 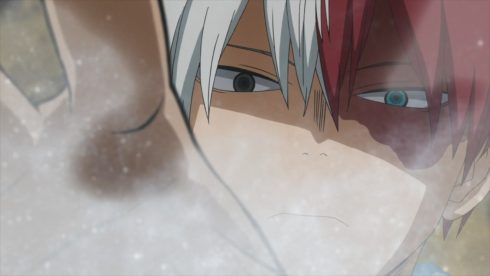 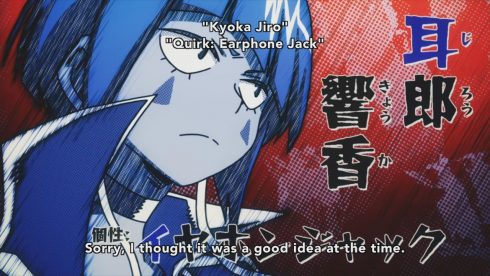 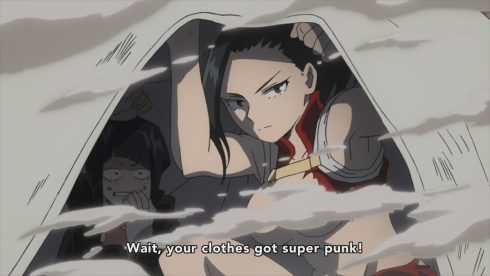 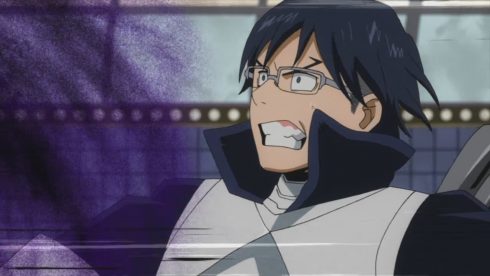 Was nice as well to see the other students and how they handled things. Todoroki was handling things incredibly well by himself. Just smoking everyone that got in his way and even taking some time to interrogate. That guy is willing to walk the line between good guy and bad guy. Credit as well that Bakugo was at least thinking about what they should do and had a half-decent plan. Some great teamwork to get Iida out the door. Ochacho and everyone just working together to slow down the Warp Guy as much as they could. Just had to be enough for him to run away.

Was a nice bit of focus as well for Kyoka, Momo, and Kaminari. Got a good look at their quirks and how they could handle things. I agree with Kyoka that Kaminari should have considered options for his costume. She certainly did and it managed to give her some very nice range. Though it was thanks to Momo covering for Kaminari’s weakness that they could topple those guys. He couldn’t go all out without shocking his allies too, so she made sure they wouldn’t end up getting shocked. Though they don’t seem completely out of the woods, it’s still a good situation overall for them.

Just as lot of good teamwork. But also balanced out by things not going entirely as planned. Iida got away, but Thirteen took massive damage. Honestly I’m not sure how hurt he is because he’s in that suit and we don’t know what kind of regular body he has. But, at least he took a big hit. This was a situation where the villains forced both pros out of their range. Thirteen is a rescue hero, he doesn’t have that much experience in combat. And Eraser Head is used to fighting very few enemies and only in short bursts to capture them. They both had to fight battles that weren’t to their strengths and both took huge damage because of it. 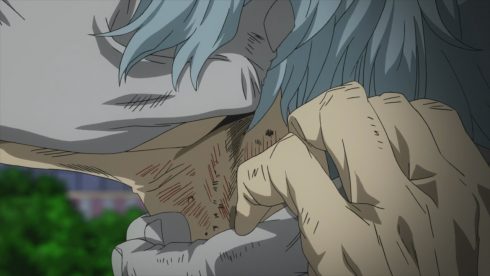 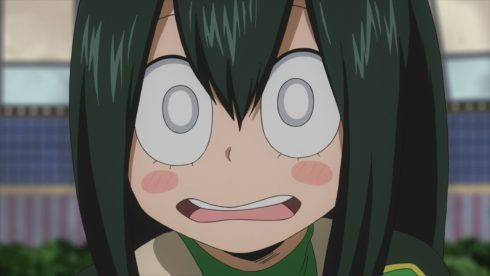 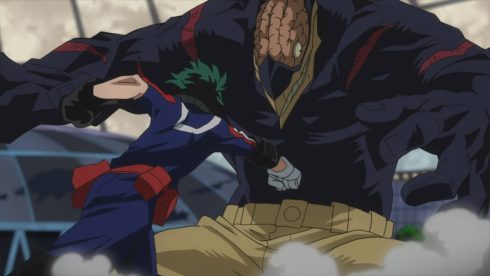 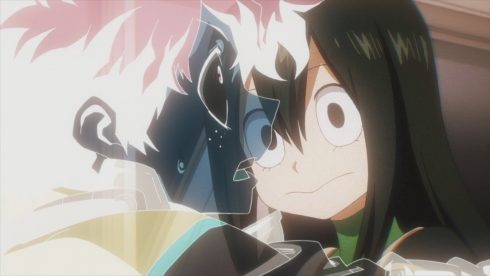 And now All Might is there and ready to go. And man he is pissed to the extreme. They might have a plan to kill him, but he’s ready to give all he has. The question is whether he has enough. He’s not nearly as capable as he was before that massive injury. Plus the villains have a threat that could take Deku’s smash and keep going. Credit to Deku, this was the first time he used a good smash without damaging himself. Sadly….it was against a monster where that wasn’t enough. It was a perfectly done moment. You build up the threat level of that enemy while also having Deku make some personal growth. What a horrible situation though before All Might appeared. That could have been a disaster.

Can’t wait for next week. The big fight starts here. All Might vs this villain alliance. Whatever he has to give in order to come out on top he will. He’s normally a cheerful and happy guy, but right now he’s pissed. His allies are hurt, his successor was threatened and I’m sure he’s feeling guilt as well. If he had just been there from the start then this wouldn’t have happened. They wanted a fight….well the villains have one now.