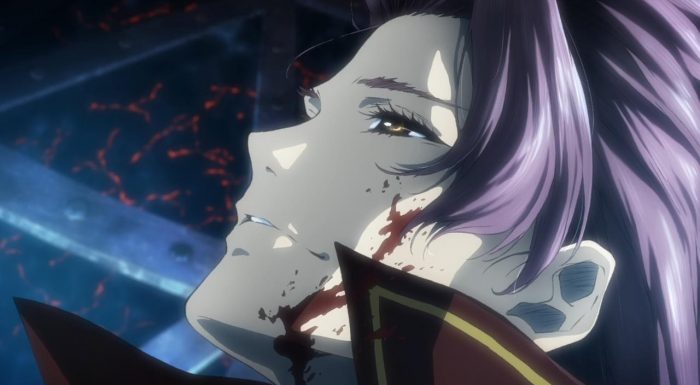 Kotetsujo no Kabaneri’s lack of ambition when it comes to storytelling and characterization generally works in its favor. Generally. There are times, however, such as this week’s episode, where that doesn’t quite ring true. Episodes like the one this week, instead, simply feel really uninspired. The whole “its not that bad” excuse doesn’t really work this week, and really, the conversation shifts to the idea of the episode just not being altogether great. The reason I think, for my change in opinion, is because of the whole character of Biba. Biba, a character who not only has a ton of potential, but who could very well lift the entire series up in a big way…. Actually just ends up dragging it all down a few notches. 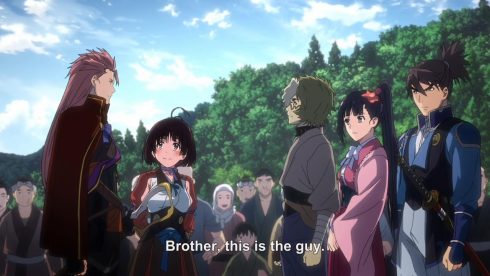 Much Like the episode as a whole, Biba is the very definition of generic and uninspired. He’s the typical pretty boy that seems noble but is actually a sadistic sociopath. Beyond just being a walking cliche, Biba’s whole introduction lacks any subtly, nuance or even anything remotely intriguing. He’s just plain stereotypical, and what makes it all such a darn shame is that his character… Or the idea of his character, is something that would contrast beautifully to our main man Ikoma. Ikoma’s the goody two shoes, the boy scout, the guy who dreams big and is generally an aspiring hero. He’s a bit rough around the edges, stubborn, and has a boyish side to him, but the guy’s heart is in the right place.

Biba, on the other hand, is on the surface, everything that you’d think is heroic. He’s tall, dashing, has long wavy red hair, commands a confident presence and even has an aura of nobility, atleast on the surface. Underneath all of that, the guy’s actually a wolf in shepherd’s clothing. Backing up for a second, Its actually not too surprising that Ikoma sees right through him. You’d think that Ikoma would reject his polar opposite on some fundamental, sixth-sense-like leve, afterall. And I think there would’ve been something really to it, if Ikoma and Biba weren’t so black and white “good guy” bad guy” respectively. 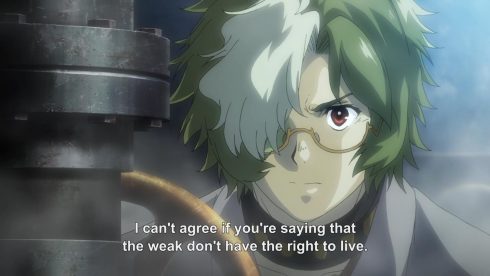 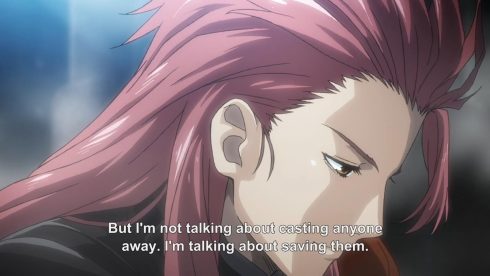 My favorite moment of the episode, was when Biba almost had Ikoma and the audience doubting his antagonistic nature. The whole idea of motivating people to fight, to stand up and become strong isn’t exactly a flawed way of thinking. There’s even a decent contrast to Ikoma’s whole: “We’re weak but we band together” mantra and personally, I would’ve loved to see Biba be painted in a much more ambiguous tone, like that.

Something like maybe Biba rejecting Ikoma’s thinking and maybe even judging him to be weak, would’ve made for a nice conflict between our protagonist and what seems like our series’ antagonist. So at least in theory, I feel like the whole Biba thing would’ve worked if it had been done cleverly enough. Sadly, the show just doesn’t try anything too new or add any twist to his character, and ends up squandering said potential. 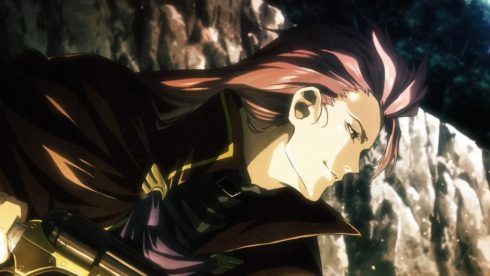 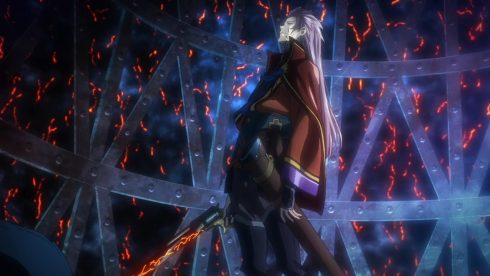 Biba ends up being exactly what you’d expect. He’s a villain that manipulates those around him, he’s got some selfish vendetta and views people around him as his personal tools. He’s clearly using Mumei, and given how Mumei is, she’s been entirely ruined and brainwashed by her “Ani-sama”) past a point where even her established bond with Ikoma and the rest of the Kotetsujo is rendered moot.

Its a weird spot for Mumei to be in too. After all the character development, after all the lessons she’s learned, and how long she’s been around Ikoma and the rest, its pretty sad to see her just regressing back into who she was when the series started. Its a bit of a misstep for the series in my opinion, because it goes against its own character development. Ikoma is obviously going to clash with Biba, and he’s going to prove who Mumei’s wellwisher really is, exposing good old Biba in the process. 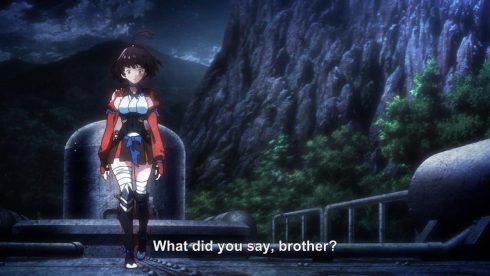 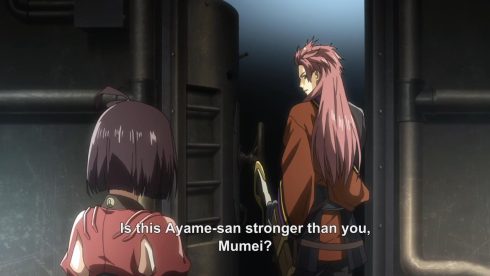 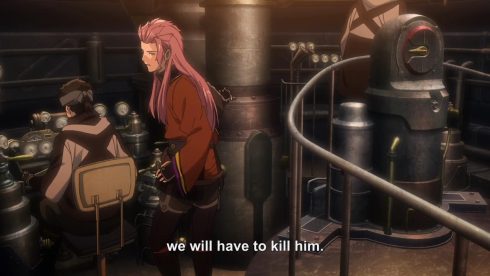 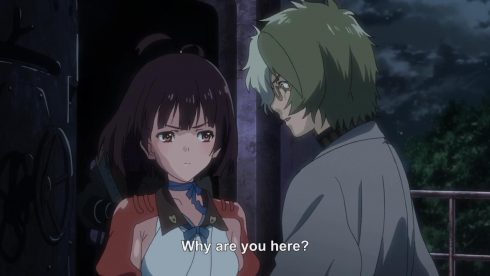 And honestly? That’s kind of boring. Its boring because it really really is predictable. Its disappointing, because its the easy route for the series to take, rather than an interesting one. But that really does fit this show to a T, doesn’t it? The show will create some nice action moments, it’ll have great production values, and most of the time the story and characters will be serviceable, sometimes even surprisingly good. But this week’s offering of Biba as an atangonist, just wasn’t any of those things, and its unfortunate that this new character really doesn’t add anything interesting to the story.

In some ways, this week is almost the antithesis of last week, where every moment and every little seemingly mundane event, actually had a purpose and developed the story’s characters. Instead of something like that, we have a villain that smiles as he cuts down the weak, a villain who’s manipulating Mumei to his own ends, and a villain that has his train being powered by a blue Kabane(or Kabaneri?) heart. 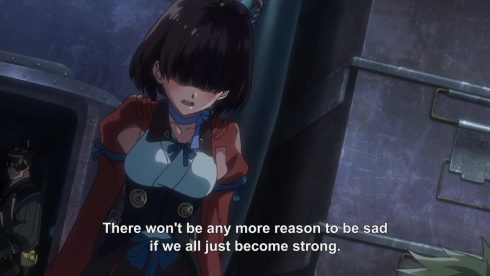 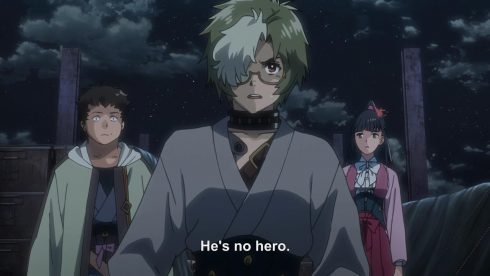 I really do hope that this week is just a bad first impression, and that there’s more to Biba than meets the eye. Given the last 7 episodes though, and how by the numbers Kotetsujo’s story can be, its highly doubtful that that might happen. So the whole Biba storyline is a bit of a miss already, with the fight for Mumei’s well being kind of being a retread of what we’ve seen thus far. We’re about 4 episodes or so away from the finale, so I’m hoping that this encounter with Biba wraps up next week, so that the last three episodes can really home in on something strong, as an ending moment.