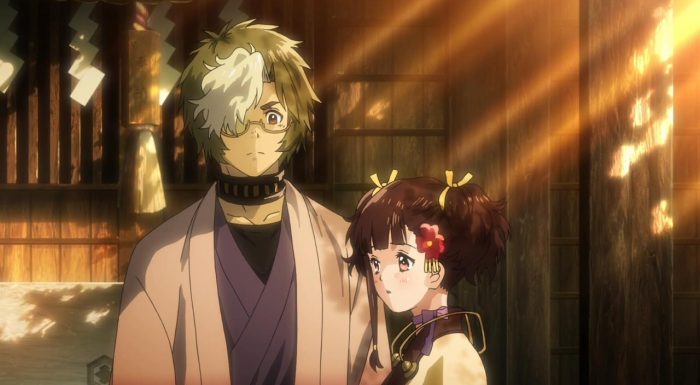 If this were any other show, then this week’s episode would’ve been the fanservice episode. Thankfully, Kotetsujo no Kabaneri manages to give its characters a brief respite from the horrors they endure on a regular basis, without devolving into something more crass than needed. This week is definitely the “calm before the next big storm” moment, but what makes it work nicely is how it reveals something new and interesting about our characters with the little time it does have.

Character development episodes like this one are some of my personal favorites, and this week’s offering definitely adds to a growing list. It was just nice to see all the characters laugh, smile and have a renewed sense of hope after all the horror and tough situations they’ve dealt with in the last few episodes. I had been expecting some fallout from Mumei’s mistakes in the last two episodes, but I guess Kotetsujo no Kabaneri isn’t really interested in being super dark too often. Instead of something glum and gloomy, the characters are actually able to catch a break this week. The episode begins with our heroes reaching a station that still had humans in it. 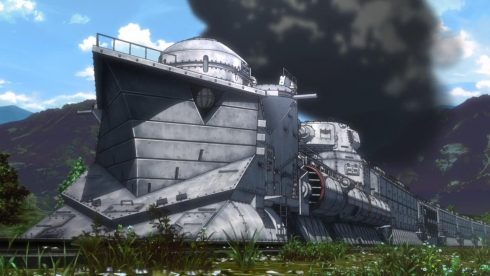 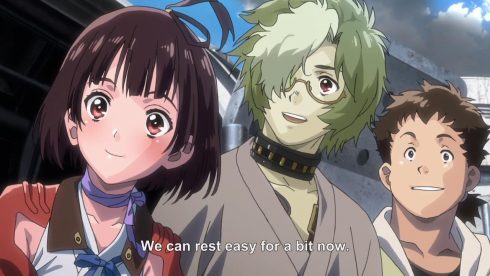 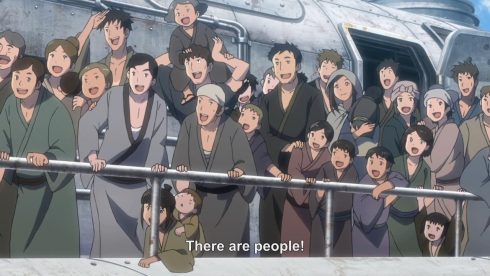 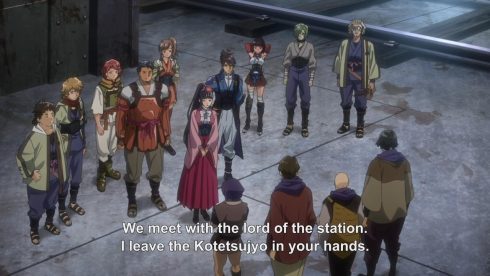 At its heart, Kotetsujo no Kabaneri is really an optimistic story with an undercurrent of sadness to keep things interesting. And while each of our primary characters had moments to goof off, relax and enjoy themselves, each of them still had a challenge to face this week.

Ayane, for example, had to negotiate for their food provisions in order for the group to make it through the rest of their journey. Again, if this were a different show, Kurusu would’ve popped in on Ayame changing rather than stuffing her face, but I think the show is able to produce the same effect with a lot less. The scene itself, is also a lot more funny too. Its kind of telling that Ayane has to maintain the whole “prim and proper” lady persona, and that even stuffing her face is something she can only do in private. 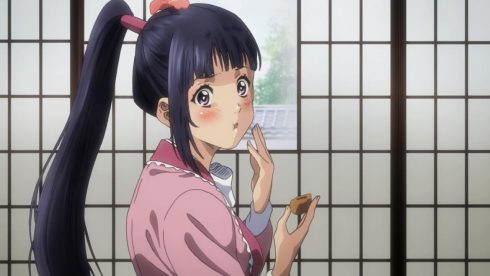 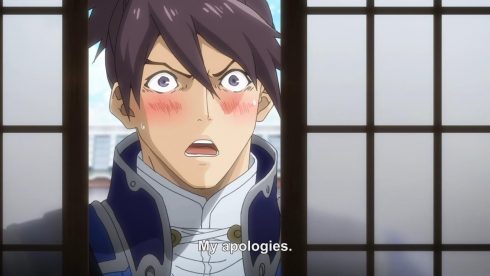 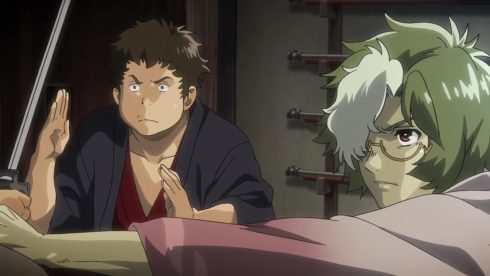 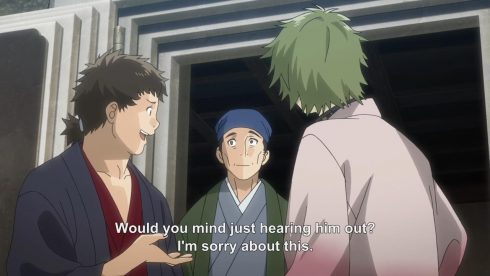 Then there was of course, the nice moments with the two bro-friends Ikoma and Takumi. The young lads kind of dish out some justice to the corrupt bushi in the area, while they’re out shopping for Jet Bullet parts. While the whole moment for these two was pretty positive, that undercurrent of sadness for both, actually manifested a bit later in the episode.

Before that, however, there was also the case of the two engineers, Sukari and Yukina. Their job in the station was to get repair parts for the Train, but even that had a moment of sadness with a young boy running encountering them. Turns out the young boy’s father had been on the train that crashed into Aragane Station (which is where our heroes hail from). While Yukina tried to feign ignorance, it was actually Sukari who gave it to the kid straight, and then told him to be strong. And through that whole exchange, we realize that Sukari actually lost his father at a young age as well, and only found out about it, much later. Which, of course, does explain why he acts the way he does, and why he has the whole “no sugar coating it” personality. 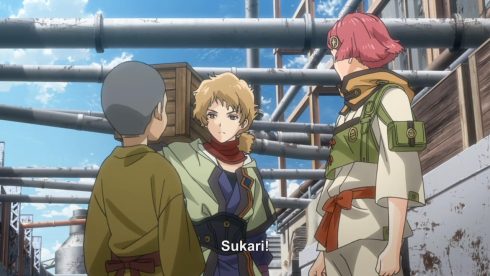 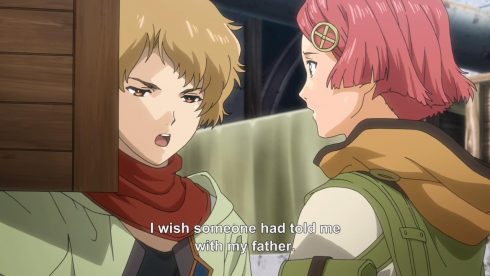 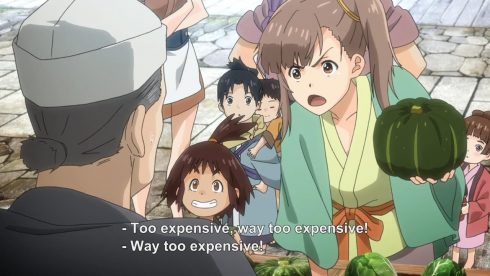 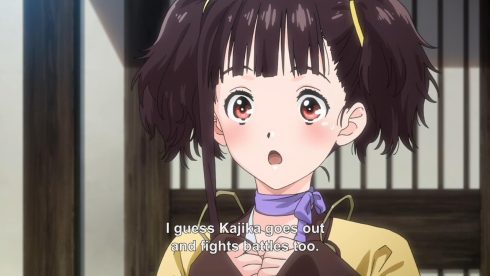 And as if we could forget, there was Mumei and Kajika. Kajika, is definitely the caregriver/motherly figure of the cast, even though she’s about the same age as Ikoma and Mumei and Ayane. There’s a very traditional “housewife” aspect to her, in that she’s all about taking care of the kids, haggling for the best prices and what not. Its a nice little moment where Mumei exclaims about how Kajika actually has her own fights too. Mumei for the most part, is pretty cheerful for most of the episode, and is particularly interested in a festival known as the Tanabata.

The Tanabata is a festival in which people write their wishes and put them on bamboo tree. Its a pretty Japanese Shinto-Buddhist like tradition, and its nice that the story finds a way to both use it as a device to extract more from Mumei and the rest of the cast. 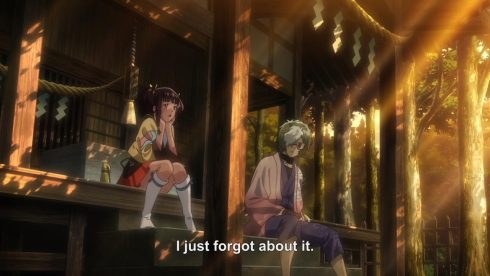 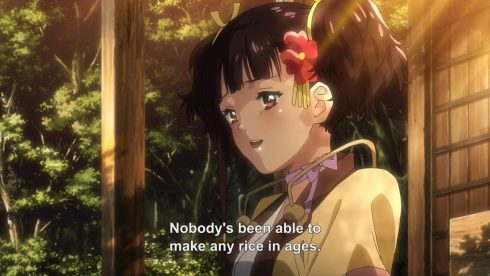 Mumei, it turns out, actually did celebrate the festival once before, and with her now dead mother at that. We learn a good deal about her after she runs off, and Ikoma chases down and finds her. For the one thing, Mumei is definitely both still afraid about her Kabane side, and also seems to now trust Ikoma enough to tell him that. We also learn that she actually abandoned her original name after she met her “brother”. Ikoma’s right to be distressed, and there’s a nice little analogue to Mumei’s original name Hodsumi.

The name itself relates to the idea of rice, or being able to eat as much of it as possible. The name’s kind of funny, but the big reveal here is that Kotetsujo no Kabaneri’s world is one where Japan does not grow any rice. That’s quite the shocker, and for the people of Japan, who’s diet has a huge staple of rice, it really would be the end of the world. Its a nice little addition to the world itself, and gives Ikoma his big goal of not only erradicating the Kabane, but making sure that people are able to use their rice paddies to grow rice again. 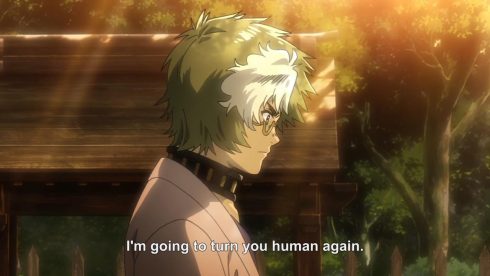 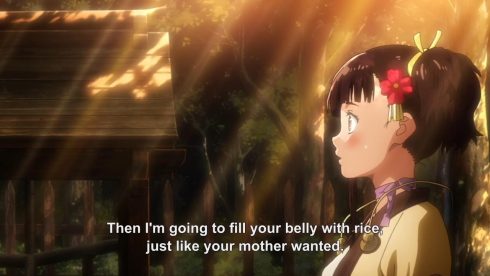 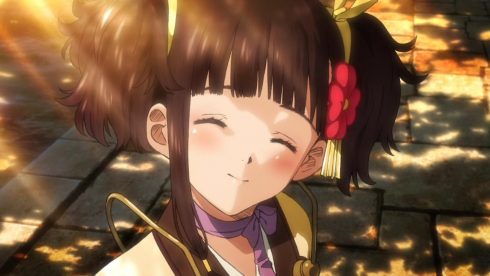 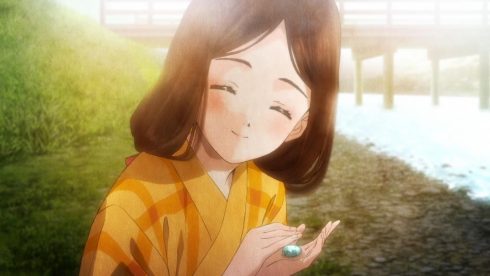 Oh and he does promise to make Mumei human, somehow, cause you know, Ikoma’s got that shounen lead aspect to him. But Ikoma isn’t just there to inspire and cheer up people, we learn through his interactions with Mumei, that he actually sees his dead sister in her. That makes a lot of sense, and also gives us some decent insight into why Ikoma is so protective of her. She’s kind of like a chance for him to make up for his previous failure of protecting his sister.

That’s a very interesting prospect, if only because it throws out the possibility of an Ikoma x Mumei romantic pairing. Which, to be honest, I kind of like. It makes more sense with their characters, and its a fresher dynamic than one we’ve seen before. Plus, if you are looking for romantic tinges, there’s Kurusu and Ayane, which lets be honest, Kurusu totally wrote that he wanted to be with Ayane on his little wish paper. 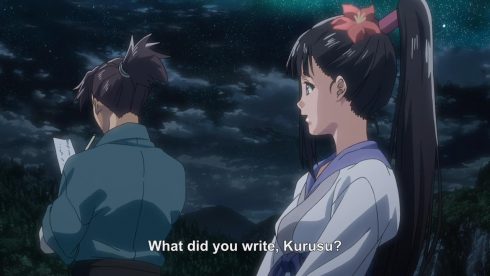 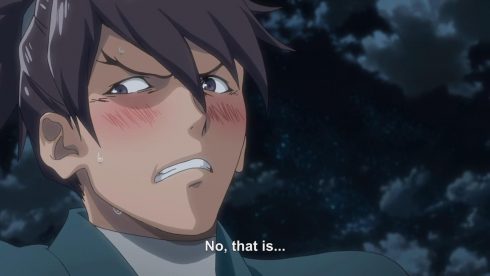 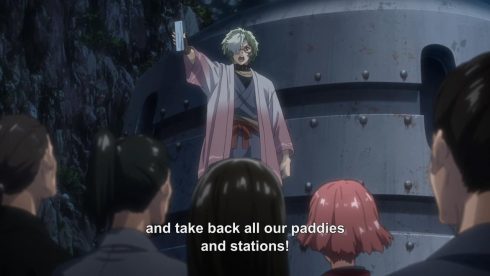 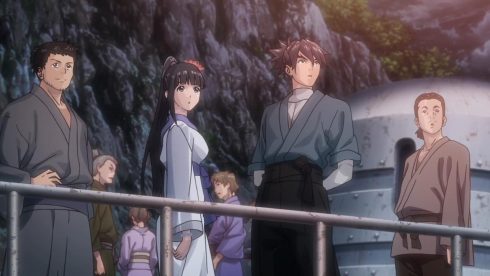 Kurusu being in love with Ayane adds another layer to his character. It makes his overprotective action logical, and also puts him in a rather sad spot. Its very doubtful that Ayane and him could ever work, or that Ayane would even notice, but the heart wants what it wants. Its a traditional “attendant/guard” falls for the princess he’s protecting story, but added to everything else, it does work.

But of course, the big revealing moment for everyone on the Kotetsujo is their wishes at the Tanabata festival. When Takumi writes a simple wish to survive, its Ikoma and then a few other characters that follow suit and dream big. Ikoma wants to bring the rice back and kill the Kabaneri, Ayane wants to open her old station, Kurus wants what he wants, and Takumi changes his wish to one where he has riches and 3 wives. Its a funny little moment, but it gives everyone on the train a new sense of optimism. All the other people under their protection are able to dream big and smile. And all of that results from Ikoma standing tall and announcing his rather outlandish dream to everyone. 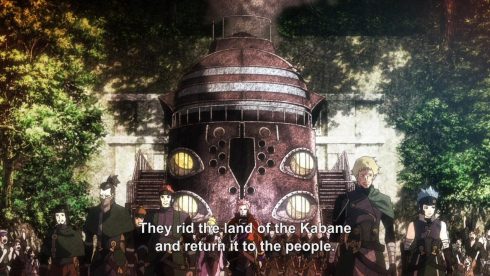 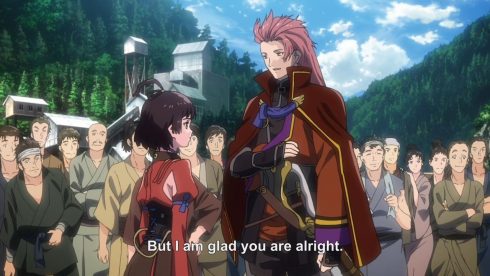 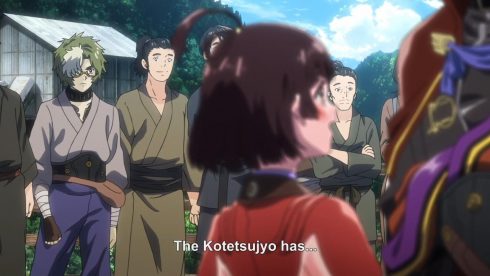 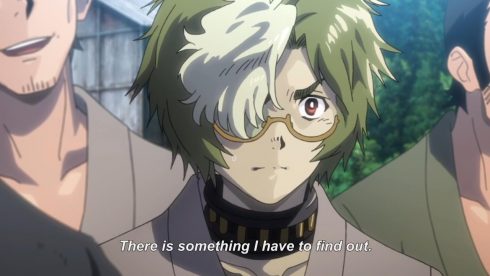 Now… You’d think that with all of this stuff, Koetsujo no Kabaneri would move onto the next station and the next journey of hurdles. In a rather interesting curve ball, we actually have Mumei’s brother, the son of the current shogun and the leader of the Hunters, arrive at the same station. Thus we have the big meeting between The Kotetsujo group and the hunters. More specifically, Ikoma has his chance to verify if Mumei’s brother is actually a hero, or some twisted individual that warped Mumei’s mind and uses her as a tool.

That’s pretty interesting, and I suspected we’d only see that particular situation at the end of the series. Yet, we’ve still got about 5-6 episodes left, and I think this changed meeting is going to drive us to the end game, and the end of the series. As usual, its a nice spot to end at, with no real indication of how things are going to go from here. All we can do, is wait for next week’s episode.