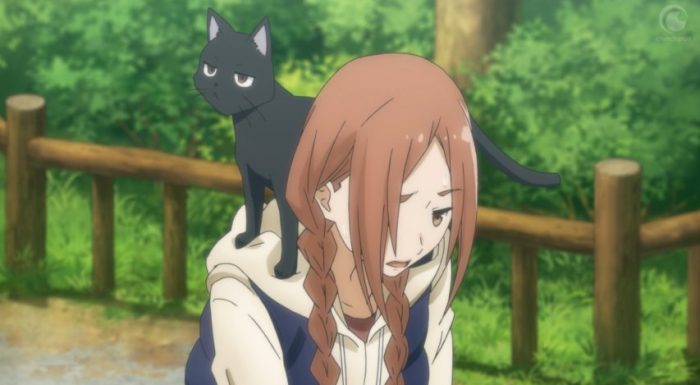 And here we arrive at one of the points in the manga that I was most looking forward to seeing animated in the latter half of episode 7 – when Makoto, Kei and Chinatsu are directed by Akane to go and visit the nearby “Cafe” that is run by a witch and meet it’s waitress. However, there are a series of events which build up to the reason why Akane even thinks of directing the three of them there in the first place, and those events comprise the first half of the episode proper: an outing spearheaded by Kei for everyone to head out into the woods and gather more edible plants (following the example from episode 2 when they all gathered – and battered and deep fried – the “bakke”). In this case they went and gathered some edible ferns, ferns which were translated as “ostrich ferns”. (For those who remember a similar type of fern was collected in the anime Non Non Biyori – the general name for these types of ferns with the curled top is called a “fiddlehead”.) 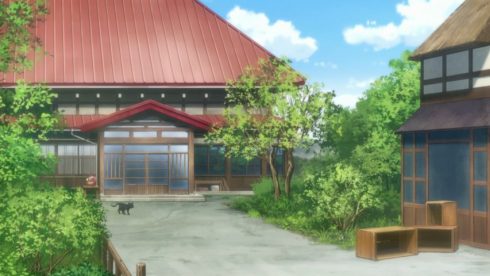 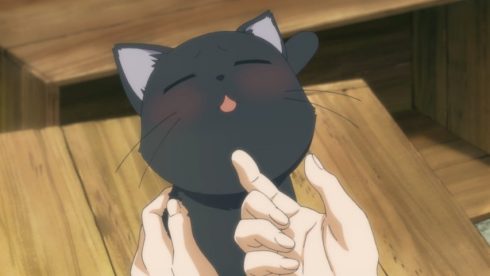 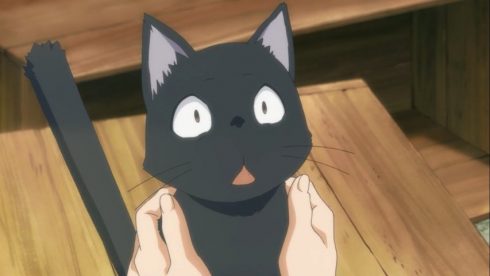 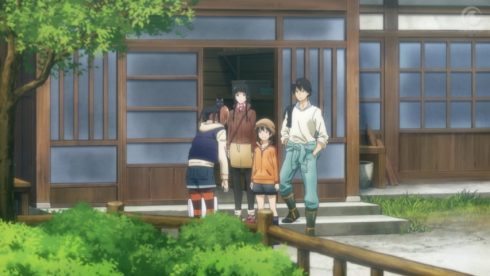 However, while the main activity of the first half was devoted to gathering the edible plants (the ostrich ferns were not the only ones that were gathered) much of the character-driven content focused around Makoto’s cat familiar Chito and Nao – Kei’s cute, dual-braided friend from Middle School. It turns out that Nao was invited by Kei to come along to gather plants with Makoto and Chinatsu. After she arrives at their house Nao comes across Chito in the front yard to their house before ringing the doorbell and alerting the rest of the expedition that she had arrived and while scratching her fur and chin, etc., unthinkingly informs Chito (who is apparently a female as well) that she appears to have gained some weight. When the doorbell finally rings Kei and company find a nonplussed Chito standing on Nao’s shoulders while whacking Nao’s forehead with her tail and refusing to get off as “revenge” for being called fat. This does serve as an occasion to inspire Chito to join the expedition and get a little exercise and activity, however. 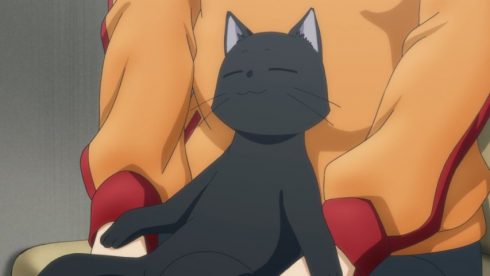 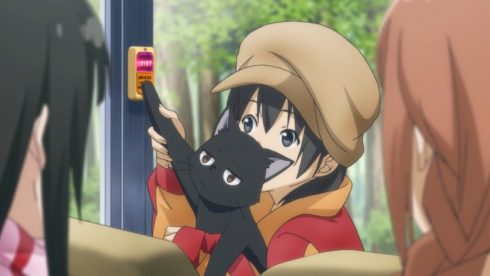 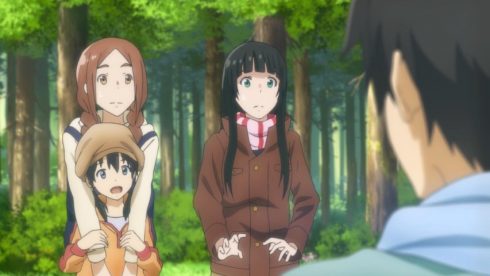 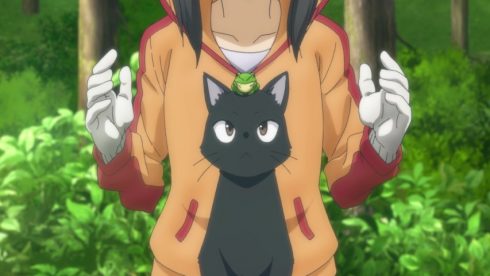 The expedition itself (which is apparently to a plot of lush, forested wilderness complete with a stream owned by a friend of Kei’s) is the occasion for dropping a few more interesting tidbits about some of the characters. For example: Chito is actually 17 years old in human years, but apparently cats who are witch’s familiars have a longer lifespan than an “ordinary” cat. We also discover that witches (in this case Makoto especially) become more animated and energetic in personality when they are closer to “unspoilt nature” – something we learn as Kei is communicating this to Nao … I wonder where he found out about this? Finally we find out that Nao apparently does not like frogs AT ALL (apparently based primarily on a “tactile objection” … she does not like the fact that they “feel slimy”. 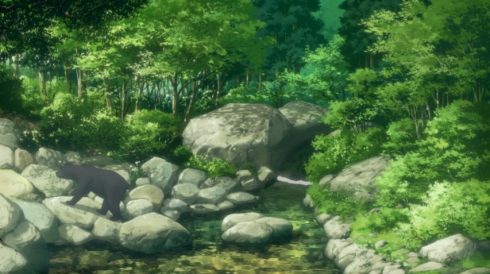 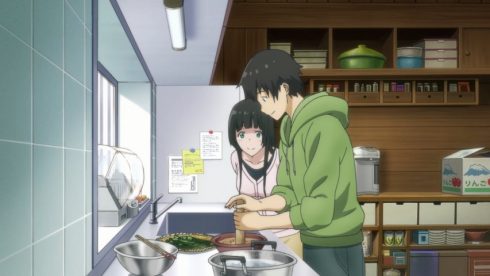 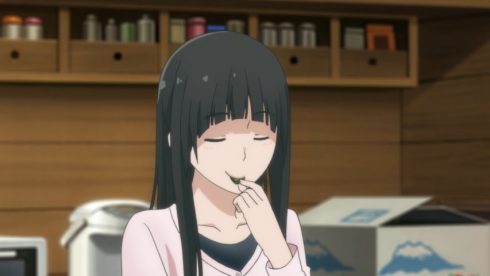 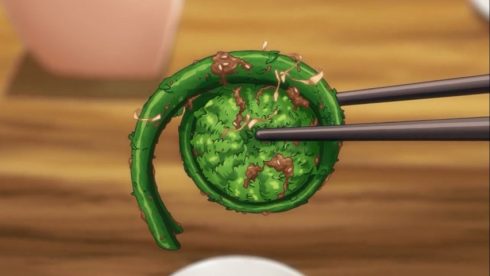 The plant gathering is a resounding success in terms of achieved goals and avoiding potential problems (Nao’s screaming at the sight of frogs is so loud it drives off a bear that was nearby) and when everyone returns home the ostritch ferns are eaten together with a hand-ground sesame paste (my mother used to toast sesame seeds using the same method of a bowl and a stirring stick device). Kei prepares it and Makoto is delighted. Chinatsu also gives it the “ole college try” since Akane informed her that a witch should be more willing to try out all sorts of things (or something to that effect) and eats the fern head, though she still does not think much of it. Akane is also delighted with the fruits of their foraging and on hearing that Chinatsu does not think much of it asks if she would like to wash down the flavor with some cake? Of course she is all for it (as is Kei – he seems to have a sweet tooth as well) and Akane decides to direct  them to a nearby Cafe run by an experienced witch – someone she thinks it will be good for Makoto to meet as well. 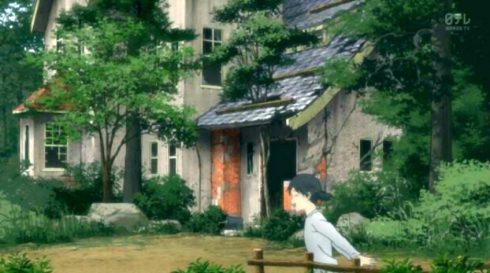 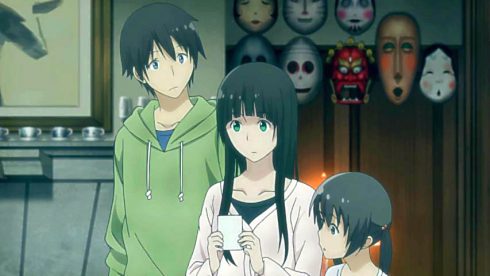 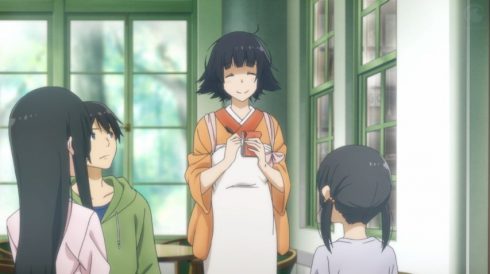 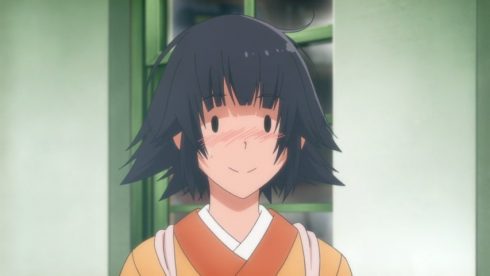 We soon discover that the reason why Kei knew nothing of the cafe is that the house it is in is hidden by an illusion spell of some sort that makes the exterior look like a ruined and abandoned building – on bypassing the spell (thanks to directions by Akane’s cat familiar Kenny) Kei, Makoto and Chinatsu enter the small mansion and follow some signs to where the Cafe part of the ground floor is located. No one appears to be around, but hand written notes begin to show up on the floor and on the table in front of them out of the blue. Makoto calls Akane, and the latter informs her that the waitress is actually a ghost (!) who is serving the witch and is normally invisible because it is extremely shy.

Watchers of the series might remember from episode 4 that Kei is very uneasy around the supernatural, so Makoto whips up a spell on a piece of paper that will make the ghost temporarily visible. Well! When the waitress becomes visible it is quite plain that the young kimono-clad lady is absolutely adorable (as well as being over 100 years old). At first she is unaware of the fact that she has become visible to everyone, but when it becomes clear she blushes and bright red and hastily heads off to the kitchen to bring back their orders and don a mask to make her feel a bit less self-conscious! XD 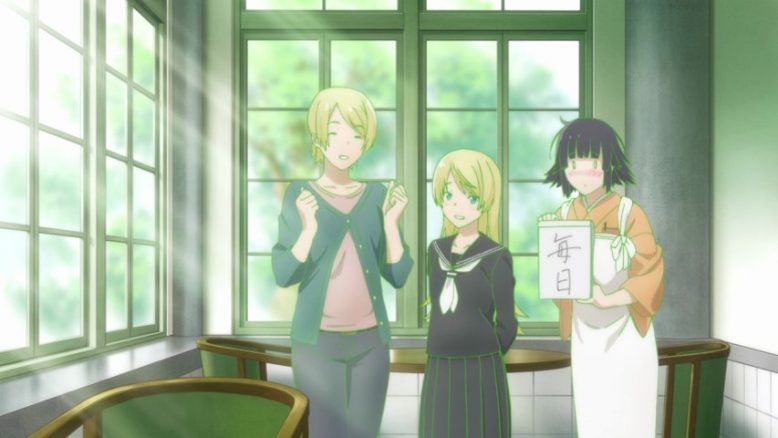 The manga has more events continue from the point where the episode left off, and I for one and really hoping that they will continue directly from here. We have already been given a tiny preview of the other inhabitants of the house that the young ghost is serving in the OP, and we were also given a tiny snapshot of the young blond girl in the middle of the above picture back in episode 1 as one of those who heard the mandrake scream after Makoto pulled it out of the ground. Needless to say, I am very much looking froward to the next episode – the adaptation continues to be extremely well done for me! See you all then!