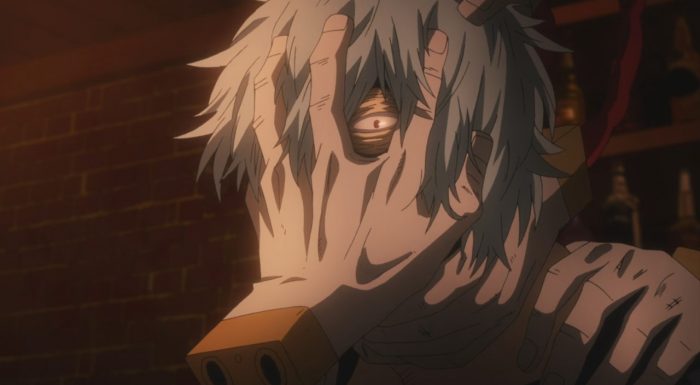 I do wish Deku would take as much consideration about his secret as All Might has. Telling your secrets to your childhood bully is just a dumb move. You are using the same moves and quirk as All Might, try not to make it any more obvious than you have to…Nothing good was going to or came from opening up like that. Luckily Bakugo is such an over the top personality and constantly pissed off so he hopefully won’t remember or think on it. I say hopefully because who knows. Could easily turn into a major incident. Either way it’s certainly cliche that the MC thinks its more important to tell his rival/bully/enemy his secret than his own mother. Just freaking lie! Say your quirk finally emerged after that big incident with the slime guy. There, problem solved. 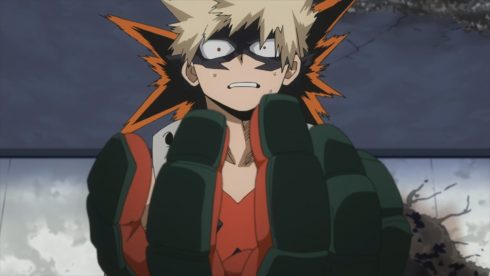 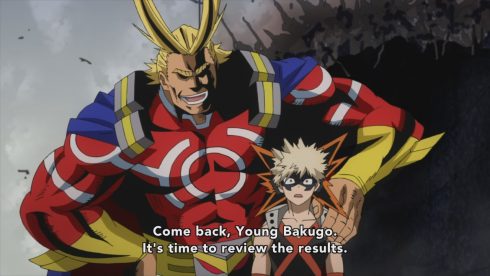 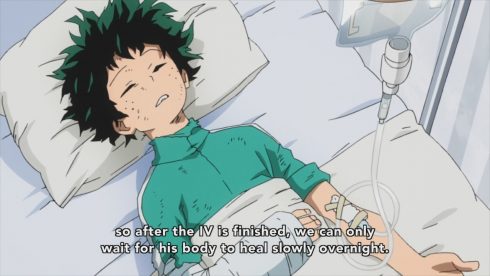 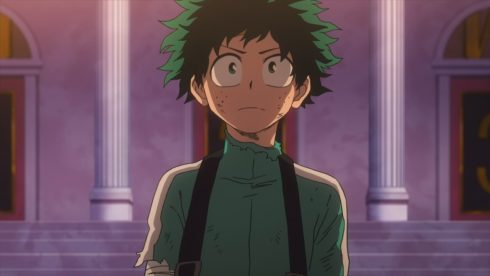 Not a lot to say about Bakugo. I just don’t like the guy. Even his resolution or dealing with his own weaknesses is didn’t work for me. Mostly since no matter what he does….he’s just constantly pissed off. Really is just a mass of pride. In the end just walked out from class because he couldn’t take the hit to his pride. I suppose credit to him that within a short amount of time he managed to turn that into a desire to overtake everyone in the class and reach the top. Still nowhere close to dealing with his personality flaws, but such is how it goes. People don’t change that easily or that quickly. For the time being…this is what Bakugo is. A very angry person who just took the first slap of reality.

Certainly there was nothing but reality to be thrown at him this time. Seeing how other pairs handled things so much better than he did. Although to be fair…you couldn’t have handled this test worse than Bakugo did. Running off all pissed and trying to settle a grudge. He completely forgot what he was supposed to be doing there and was just chasing Deku the whole time. Maybe on some level he thought that if he crushed Deku they’d win anyways, but it was still a really poor decision on his part. 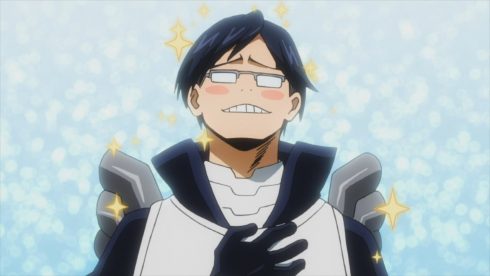 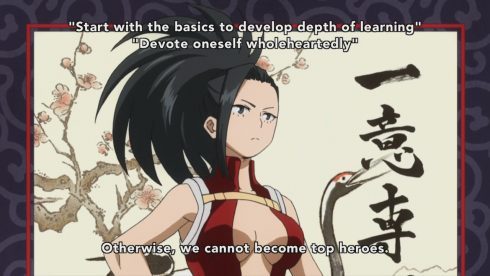 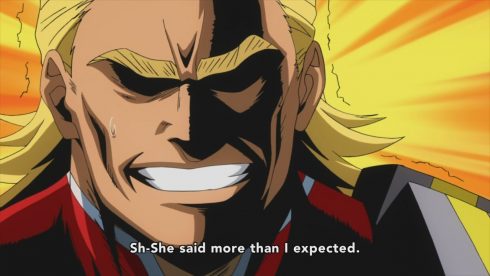 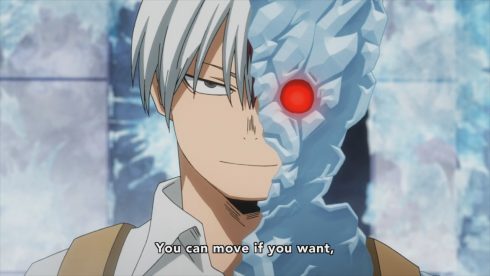 I suppose giving Iida the MVP spot for that match was alright, though not sure if I really believe it. After all they gave Ochaco a minus for using tactics that took in mind that the weapon wasn’t real. But isn’t the same to be said of Iida. He couldn’t have just picked up and carried around a real nuclear warhead, both for the danger and the weight. I suppose you can say he didn’t break character, but that seems like a minor point really. They aren’t here to be actors.

Was interesting seeing everyone else have their tests though. Obviously it was a quick run as you’d expect, but at least got to see a few interesting moves. Some were just really one-sided and ended in a hurry. The Todoroki curb stomp being the highest level of them all. He just casually froze the entire building, walked up there and won. Talk about making all the efforts of the other side meaningless. There wasn’t anything they could do after being frozen other than rip the skin off their feet. Not that they couldn’t have tried that. They do have the super healer at this school. But, in the end that team took the loss simply rather than really hurt themselves for it. 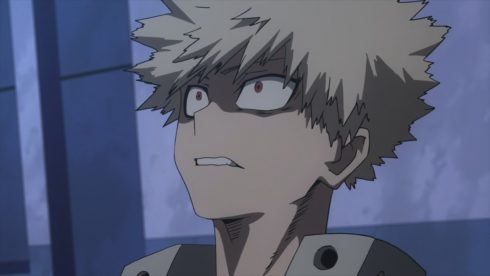 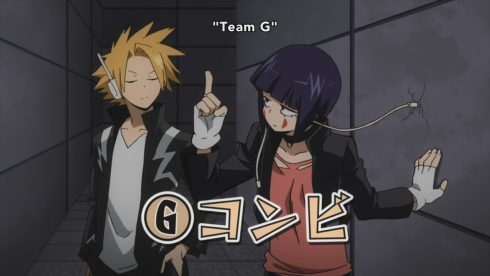 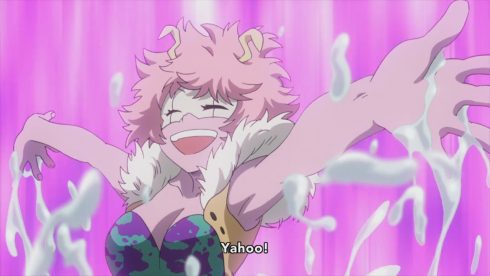 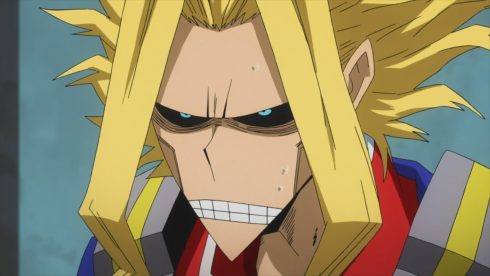 There was a lot of solid powers being shown off here and not just the standard types. Sure you had electrical powers, ice powers, heat powers, etc. But also powers like the earphone girl, the frog girl’s powers, and….that girl that was surfing on acid? This might be one of those times where it would be good for the show to just throw up placards explaining all the abilities XD. Though I suspect we’ll get that soon enough. This is just a preview of the kinds of powers we’re going to be seeing here. If nothing else this show knows that it has a lot of flexibility to work with. Quirks can basically be anything, so might as well go nuts with them.

It wasn’t a bad episode. There was some weight to the end results. The heroes won, but they barely pulled it off in terms of Deku’s team. Certainly Deku having to carry those injuries for a while longer should make that clear enough to him what is at stake. If he utterly exhausts himself on a regular basis then it’s going to be tougher to get back on his feet. Even having a super healing quirk available, it isn’t all powerful. He has to pace himself and get through these things without getting hurt. Fair points made by All Might during his chat with the nurse as well. He has a lot of pressure and responsibility on his shoulders here. If it’s found out that his power isn’t natural it could cause chaos and possibly lead to a loss of faith by the public. He has to be seen as this unwavering tower of strength and peace. His presence has kept criminal activity to the lower levels it has reached, if he looks weak….nothing good will happen. 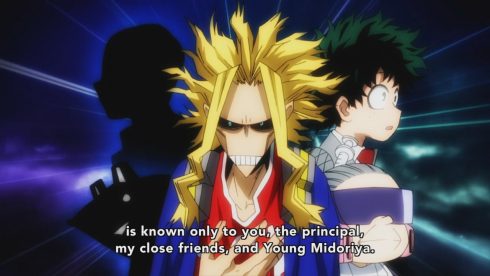 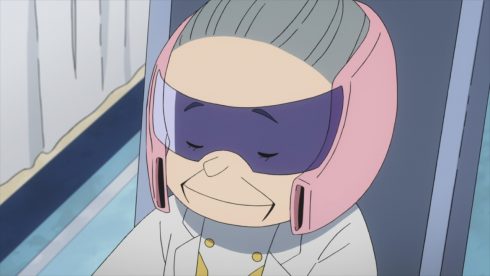 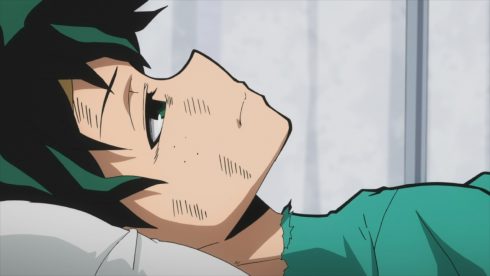 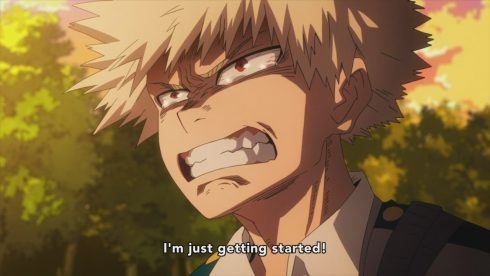 Which of course sets up nicely for the conflict with this weird group of villains. Though to consider targeting All Might….they are either really strong or really dumb. We will probably find out soon enough. I suppose whatever conflict that is coming up with this group will be the climax for the series. At this episode count it doesn’t seem like there is time to set up or cover any bigger conflicts. Will just have to see what happens.