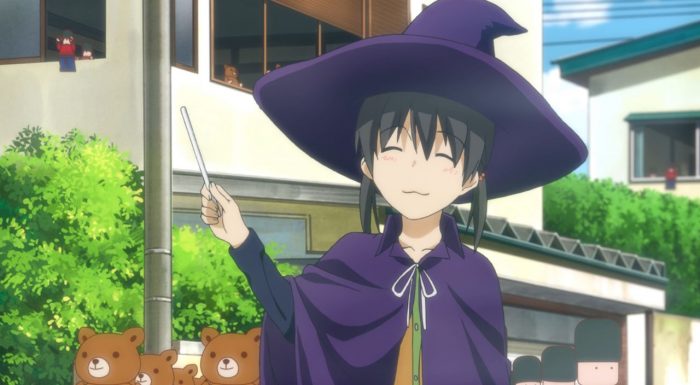 As expected, episode six did indeed have one of the most looked forward to events in the manga, and that was the agreement by Makoto’s older sister Akane to temporarily take Chinatsu under her wing (at the latter’s insistent pleading) as an apprentice witch. What this means in a practical sense is that Akane (and by extension Makoto a little) will be consciously and deliberately bringing Chinatsu into the “daily existence” her kind inhabit, and by extension the viewers will also be able to be lead there by the hand as well. Needless to say this is an important turning point in the story. 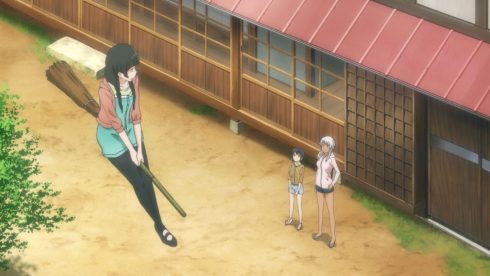 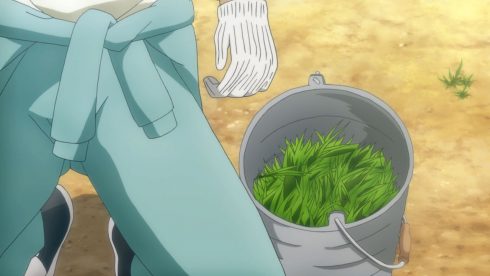 Several things come to mind in relation to the whole seemingly out of the blue insistent request of Chinatsu to Akane that sheds more light on their characters. The first is a reminder that Chinatsu does indeed seem to have some aptitude for becoming a spellcaster. Way back in episode one when Makoto pulled the mandrake out of the ground the all of the lines who noticed the sound of its wail were also bound up directly with magic, while those who did not notice were not.

Another interesting thing is how responsibly and seriously Akane took the request – it was very much in contrast to the easygoing and spontaneous disposition she carries throughout much of her interactions with others. And finally even after Chinatsu received permission from her parents (at the drop of a hat) Akane continued to be very, very cautious and set up a sort of compromise position to more thoroughly sift out the true intentions of Chinatsu over time. In many ways her decision really was a rather wise one. 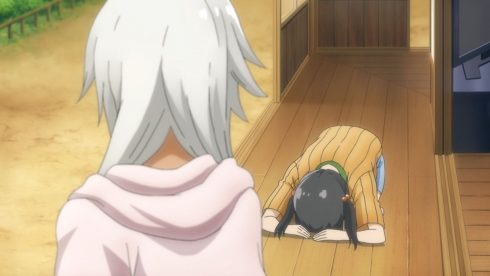 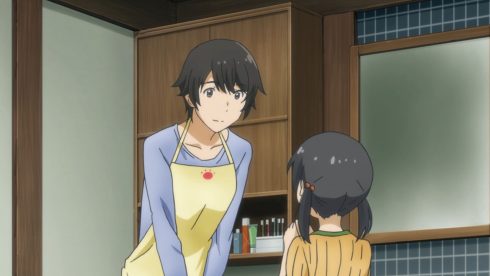 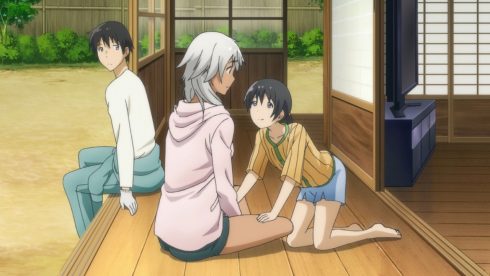 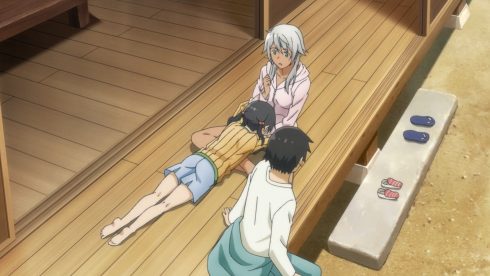 Aside from the particular act of Chinatsu being accepted as a temp apprentice there is also the context. Akane has been slowly helping Makoto how to better use magic spells – remember back in episode three where Akane stressed the importance of a record of the practical utilization of spells as being needed to complete one’s training period and how she showed them the spell to summon crows? Well, she is continuing to help Makoto out for the time being, it seems, and Chinatsu apparently got inspired and interested on observing this and hearing of more details around the history and practice of the sort of things Makoto is being shown. 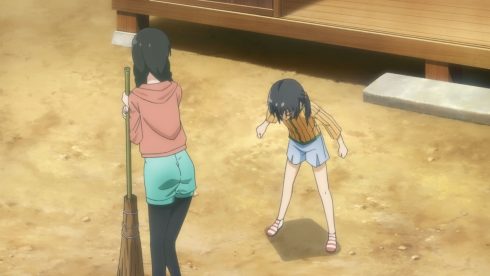 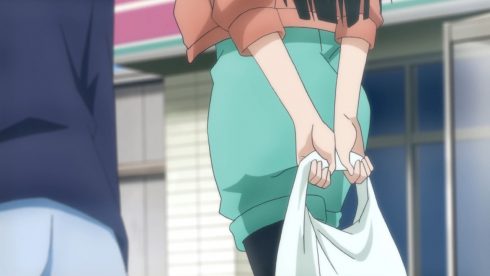 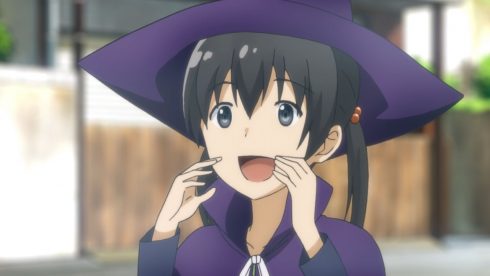 Other than the aforementioned summoning of the crows, in this episode we see Makoto getting tips for how to fly on a broom – apparently the trick is to levitate booth the broom and oneself at the same time to prevent the broom from digging into the groin area (anyone else remember the early episodes of Straike Witches season two?) and the second item used for balancing the gravity in flight need not just be a broom; we are also mentioned that pigs were used a long time ago. We are also exposed to a spell for the infusing of food items with the magical ability to exercise a limited emotion control for a brief period of time over those who eat them – in this case it was crying uncontrollably or laughing uncontrollably (or both). 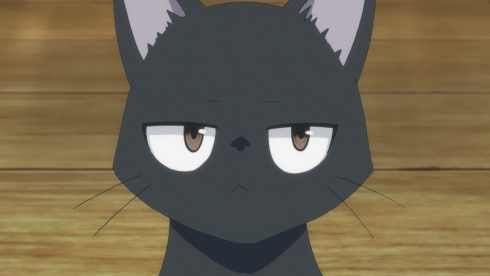 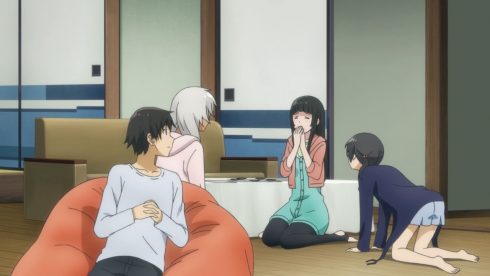 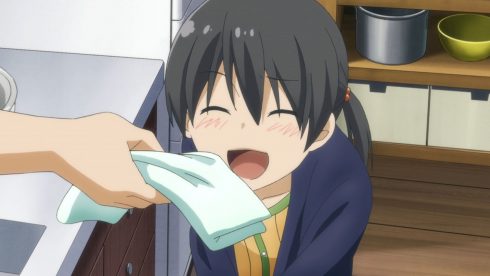 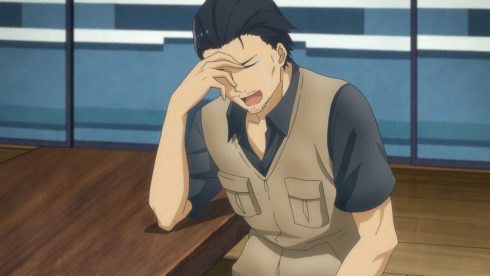 One last element of this watershed of an episode that I feel it is worthwhile to mention is the interactions between Kei and Akane. I felt that the focus on them individually was quite telling of other sides of their characters and also showed Kei’s perceptiveness. It seems Kei really, really loves movies and is fairly knowledgeable about them. When he hears Akane mention in passing that she was in a little known movie cast in a minor role and asks about it the question is gently brushed aside, which elicits Kei to mention that Akane is rather mysterious. I would agree, and more than that I think that Akane’s goofy, cheerful side is actually part of her, but that she also uses it often as a sort of smokescreen to conceal her intentions or actions or the like. Underneath it all she is quite serious and responsible, yes, but also … well … mysterious.

Kei is unusually perceptive as well as we have mentioned, but I think that one of the things the series is quietly emphasizing is how simple folk like Kei or his parents are also rather special and even “magical” in their own way – in their perceptiveness, in their ease to roll with a situation, in their closeness to the natural order and their quiet love of plants and animals, in their easy-to-miss inner freedom and straightforward lack of ulterior, self centered motives. Kei’s existence represents the “everyday normality” that Makoto is a part of, yes, but at the same time his everyday normality is quite distinct from that of “muggles”. Another fantastic episode! Looking forward to next week!