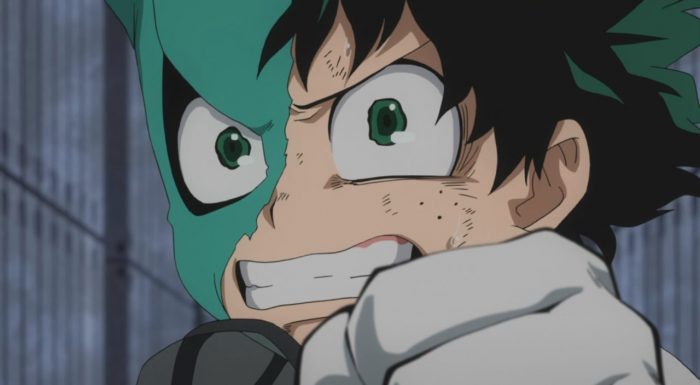 And so the classes continue for Deku. Certainly there is no shortage of difficulties ahead of him though. This hero course isn’t easy to get through and he’ll have to push himself hard in order to get through it. Especially since right now the most important thing is getting control over One for All and he doesn’t have that yet. Feels like driving uphill for him. Once he can get to the point where he has control then it’s all downhill from there. Everything is a challenge right now because he can’t really go all out. Once he can really use that power flexibly and not just breaking fingers then he’ll be one of the top students in the school. Just a matter of time.

Time though isn’t something he has a lot of right now. Izuku’s nickname has become an interesting thing in itself. It started out as an insult against Izuku based on the word “useless” (at least how it sounds in Japanese) and Deku is trying to carry on Ochaco’s interpretation of it giving the feel of “you can do it.” Which is a much more positive view and very much aligning with Ochaco’s character. While I think part of it was running with the Deku nickname based on the fact that it was the cute Ochaco suggesting it, I do think Deku likes the idea of her interpretation. Also is a good way to fight back against Bakugo. 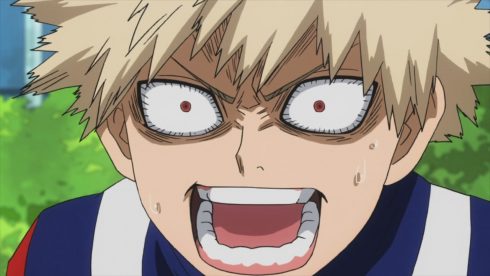 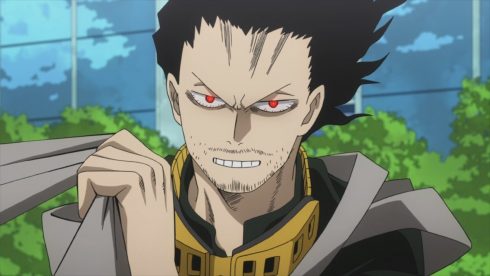 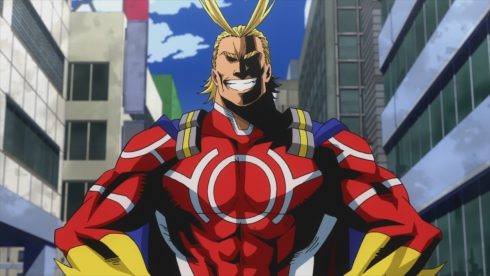 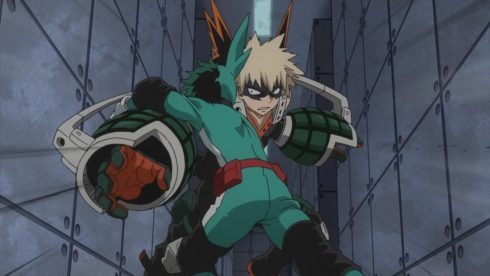 That relationship is just odd in a lot of ways. It might have started out as an ok friendship that devolved badly as time went on. Bakugo going from a somewhat cocky kid, but one that enjoyed hanging out with Deku into what we see now. A bully who is constantly pissed off at his target. Honestly this kid seems to need more anger management classes than a hero course. I suppose it helps that he never even considers the truth about Deku’s quirk, but the idea that he could stupidly convince himself that Deku was deceiving him is beyond ridiculous. This guy just seems constantly angry and pissed off which of course makes it somewhat easy to predict his actions.

The downside to this situation is that Deku can’t really attack with ease without killing Bakugo and has to rely mostly on his physical ability. At least though it grants him a chance to give some payback. He’ll just have to be very cautious. The good thing is that he has studied and knows Bakugo better than anyone. He knows his quirk about as well as Bakugo himself does. Whether that lets him win is another question entirely. But he should be able to keep Bakugo busy and let Ochaco try to deal with Iida. 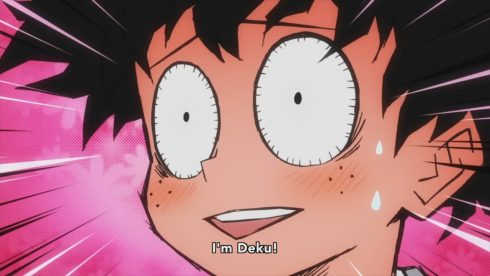 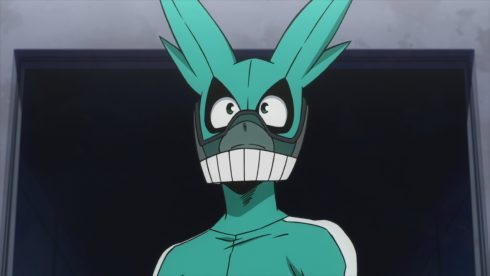 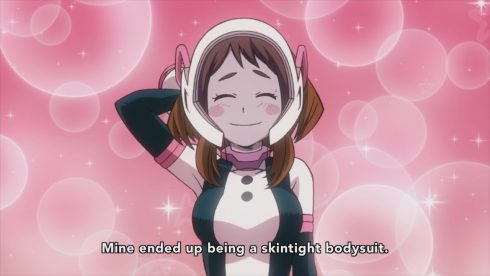 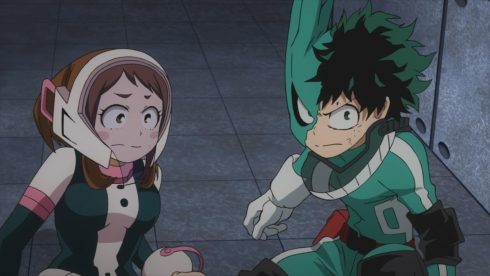 Of course Ochaco is used a lot as the lead female of the show and a fair bit of the fanservice. A given I suppose that she’d neglect to specify about her costume and get stuck with a very fanservice focused one. I suppose it does give her fair mobility and doesn’t have to waste her quirk on lightening up her clothing. A smaller burden when she wants to make herself float. But, yeah safe to say what the designers even within the show were thinking with her. Still, it is nice to get a good view of her personality and friendliness. A very earnest person who after a few good encounters with Deku is more than willing to chat him up when the opportunity presents itself. Should be interesting to see how she uses her gravity quirk in a fight against such strong opponents.

In terms of costumes, had to chuckle as well with Deku. Very clear how he’s using that costume to mimic qualities of All Might that he himself doesn’t have yet. Using the costume to create that huge smile and that hairstyle. Maybe someday Deku will be able to reach that point without having to rely on a costume. Good for him and his mother to have this chance to bond. I don’t think her stance was unreasonable when she found out the test results, but I’m sure the guilt weighed on her. Even if there isn’t anything special about it….still glad for him. 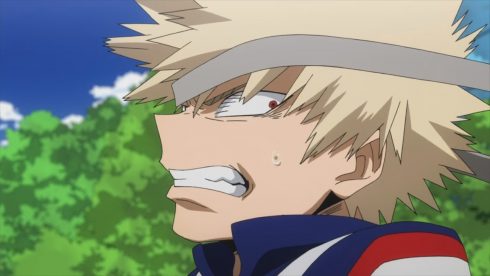 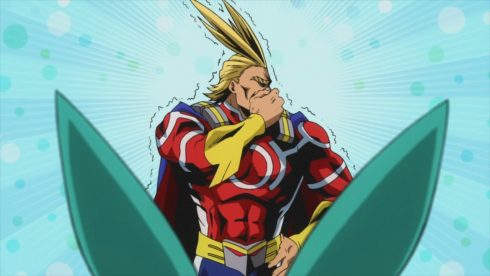 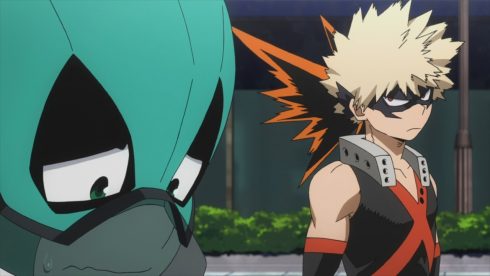 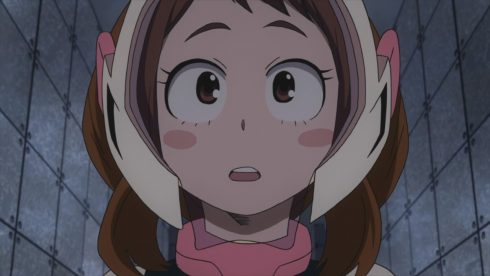 This test is a good chance all around. An opportunity for Deku to really show up Bakugo. At least turning this into a good rivalry rather than a nice MC and just a bratty bully. Will be a tough situation to handle though. The situation with Aizawa was pretty good as well. Though it had a nice spin in that Aizawa would have expelled those he considered without potential or just the last place person if they didn’t show potential. Deku showed that so Aizawa changed his mind on the rule he set up. The class might relax thinking that they were safe the whole time….but they really weren’t.

Not a bad episode, had some good moments like Bakugo getting shut down by Aizawa and the last few moments. Things will continue to be busy I’m sure since these little tests and lessons will be a constant thing for the students. Will be nice to see Deku take steps forward and stand up for himself. He’s lived his life in fear of Bakugo, but now he can start truly standing up for himself on equal footing. The gap between them won’t be there forever. Next week should be interesting with this showdown getting underway for real.